The Magic of Mortise, Tenon and Pegs

Looking back now I feel I was very ignorant of how old barns were built, but reading Radojkovic's book 'Barn's of the Queen's Bush', I realized that the most important part of the barn construction was the part you can't see.  These are the hidden mortise and tenon joints, and the pegs that hold them in place - all hidden from view except for the ends of some pegs. 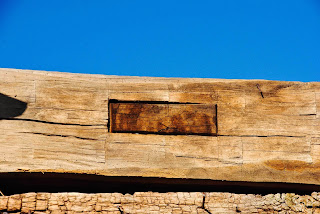 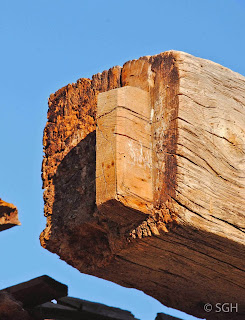 These photos illustrate a mortise (the cut out slot) with the tenon of a beam still in place, and a beam with a tenon on the end.  I had to go back and look for these, because inside the barn itself these do not show.  However, part of a barn extension out back fell down, revealing these ones. 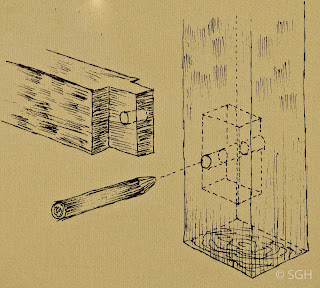 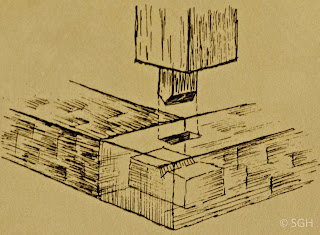 These two illustrations from Radojkovic's book show different mortise and tenon joints, one with a peg to secure it and one for the bottom corner sill joint, that would be used in barn construction.  These were what clued me in to look more closely at the photos of the barn I had taken. 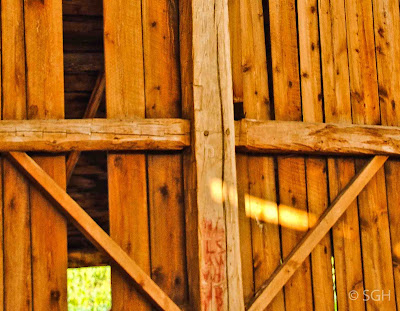 The two beams attached to the post in the centre of this picture illustrate what was done.  Both beams are tapered to form tenons on the end, and slots were cut in the upright post.  These are part of the east bent that was put together lying flat.  Then two pegs, which you can see the ends of were driven in to secure them.  The entire basic timber frame of posts and beams is connected with these types of joints. 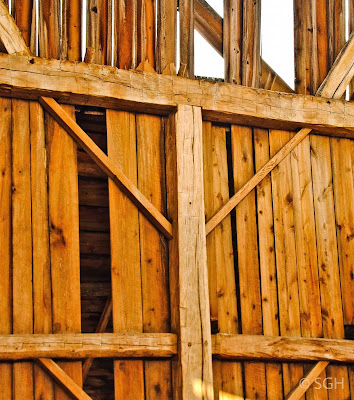 In this picture, extending higher on the same post, you can see the ends of 5 pegs altogether - the two near the bottom, one holding the upright post to the upper cross-beam, and two holding the queen posts to the upper beam.  The one on the left actually sticks out a bit. 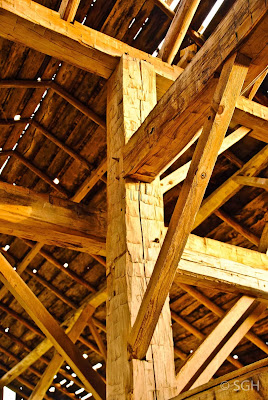 Here's another location where you can also see the ends of five pegs, one holding the beam that enters from the right, two holding the beam extending toward me, and two just barely visible holding the upright to the top beam.  Again one of these pegs sticks out a bit, showing a tapered end.  You can't see the mortises or tenons of course, 'cause they're all inside the post and beams. 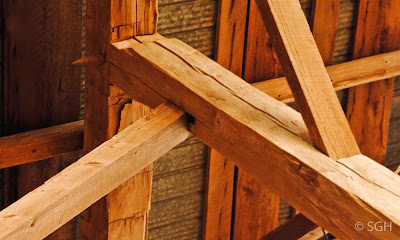 Even up under the roof where the queen posts are holding a purlin on which the roof rafters rest, there is a visible peg holding the joint together.  This peg sticks out nearly 6". 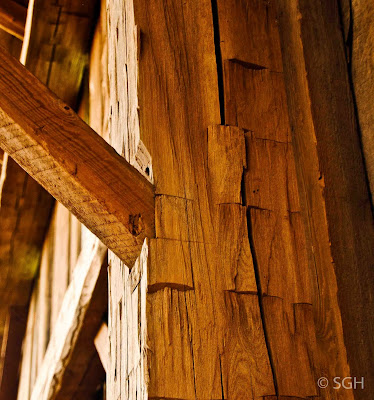 None of the smaller diagonal braces in this barn are pegged, but there are notches cut out to hold them, known as 'shoulders', and probably a small mortise and tenon joint inside.  In this photo you can clearly see the obvious broadaxe or adze marks on the post, and what I believe are saw marks on the smaller brace. 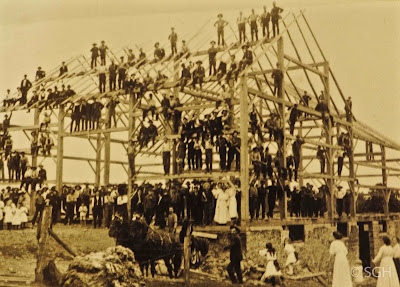 I did see a barn- raising once, as a young child, when two barns were destroyed by a tornado.  We drove by a few weeks later and a huge crew of men was rebuilding both barns!  This photo is from the cover of 'Barns of the Queen's Bush', with full credit for what I've learned to Jon Radojkovic.