Among the 14 barns down our road I mentioned yesterday, 7 are still standing.  Two appear to be unused, but the other five are either used for agriculture, or have been restored by rural non-farm owners.  I've been fascinated by this pattern of change for years, ever since I spent time in my uncle's barn when I was young.  So here are the five barns, and some reflections on the changes going on in the rural area. 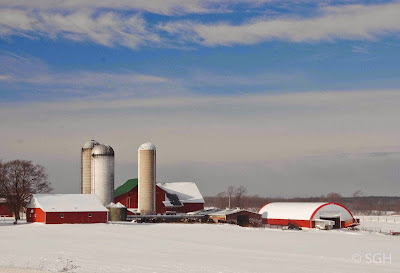 The largest farm operation is this dairy farm, with a much expanded set of buildings.  I've been told that they no longer milk cows, but focus on raising dairy calves for the industry.  I'm always impressed by this well-cared for farm every time I drive into town.

It's notable that farmers with farms like this probably farm much more land than their own home farm.  So even though half the barns down this road have disappeared, almost all the farmland is still being farmed - either owned outright by neighbouring farmers, or rented, either from retired farmers or rural non-farm residents. 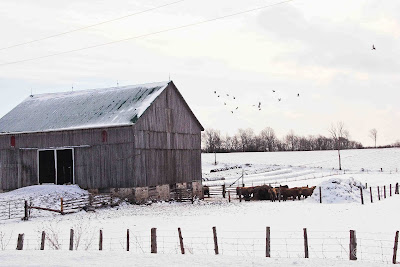 Also down the road is a typical Grey County beef farm,  This appears to be a small operation, and I suspect not large enough to provide a full-time farm income.  Like many around here, this farmer probably has a job off the farm, and harvests his hay and tends to his cattle in his spare time.  Still, it keeps the land in agriculture. 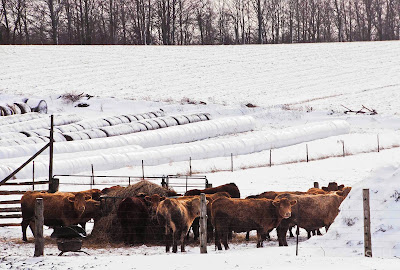 I like seeing cattle anytime; these ones were huddled near the hay pile when I took this, their winter supply of hay wrapped for protection in the field behind them.  They look like Limousin cattle to me.  Across the road is a herd of Aberdeen Angus, and around the corner, some Charolais. 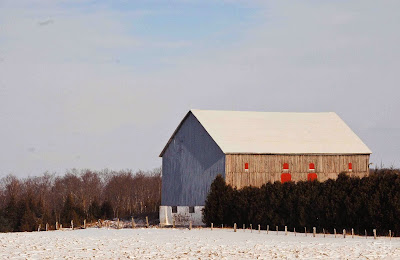 Then there are the barns that appear to be owned by rural non-farm owners.  These barns have been repaired, and are obviously being cared for, but I don't know how much they're being used other than for storage.  Still, keeping them around adds to the rural landscape. 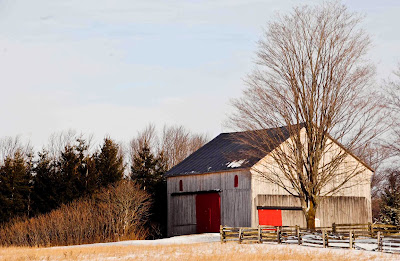 I've often heard that once cattle are no longer kept in a barn, the lack of warmth lets the frost into the foundation, and it starts to deteriorate.  Siding comes loose, and roofing may need repair too.  Barns like these need regular maintenance to keep standing.  This barn got new siding a year or two ago, and a new roof recently too. 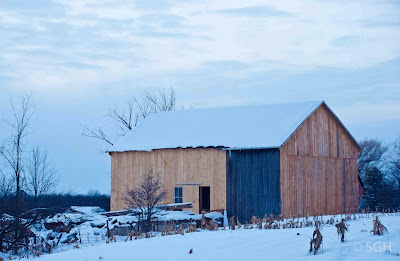 Finally, this is our neighbour's barn, just repaired this summer.  Most of it has been resided, and there's new roofing.  I had asked them if I could come and take pictures, but didn't know they planned to have it repaired.  When I discovered that I was able to get a lot of interesting pictures of the interior barn structure before the new siding went on.  That's for tomorrow.

The fate of barns around here lies partly in the changing technology of the hay harvest.  I'm old enough to remember cutting hay with a hay rake on my uncle's farm, gathering it loose, and loading it into the hay mow with the big fork that plunged down into the hay load from the rafters.  That's why these barns were built as they were, to provide a big hay mow upstairs above the cattle, with a drive in for the hay wagon.

Then square bales took over, but they were still stored in the barn for protection.  Now that the big round bales have taken over, there is little need for the upper part of the barn at all.  Often barns are therefore replaced with larger one-floor barns for livestock, and a separate building for hay storage, as in the first picture above.  In other cases the bales are wrapped in plastic and just stored in long lines outside - no need for a hay barn at all.

I'm not sure that this huge change in the rural landscape is either good or bad; it's just the pattern of what happens over time.  Someday perhaps I'll write a bit about the increasing specialization of the southern Ontario landscape and farms, as we continue to move away from the former small mixed farms to large and small but specialized modern operations.  In the meantime, enjoy the rural countryside.