As I mentioned in yesterday's post, the neighbour's on the farm to the west welcomed me to come and take pictures of their barn.  When I saw it was being repaired, last July, I got over there immediately, knowing I'd be able to get some pictures inside without the usual gloom of an old barn.
. 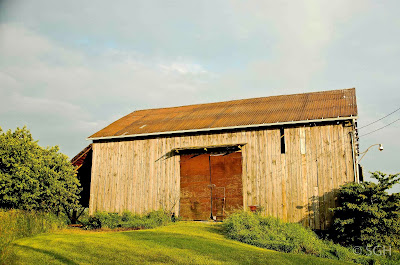 First, let me give full credit to Jon Radojkovic and his great book 'Barns of the Queen's Bush'.  Since I've taken these pictures, and tried to understand what I was seeing, his book has been my inspiration, and the source of the diagram reproduced below.  (The 'Queen's Bush' was a large area including much of today's Grey and Bruce Counties between Lake Huron and Georgian Bay, first opened to white settlers in about 1850).

The picture above is the barn as they started to repair it.  Much of the siding has been removed from the back and the side, but they didn't need to replace the front which was in quite good condition. It still has the old roof sheeting. 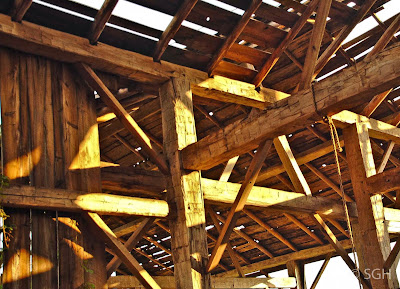 At first glance, looking up inside the barn it was a jumble of posts and beams I could make little sense of.  All the smaller diagonal beams make the picture complex.  You can see here they have removed the roof sheeting, and part of the side wall.  The afternoon sun shining in lit the 100+ year old wood beams with a golden glow. 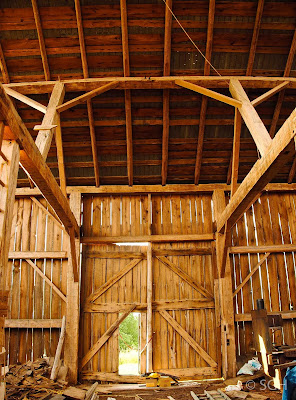 This is the large open centre aisle of the barn, where the hay wagon could drive directly inside for unloading.  The floor under this aisle would be reinforced to take the weight.  Here the 'walk-in' door is a smaller door inset in one of the big swinging barn doors.  Putting the big timbers you see here together is the big challenge in building a barn that will stand for 100+ years. 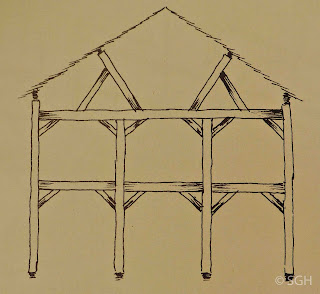 Construction of these barns was undertaken by travelling framing crews who knew how to put a timber frame, or 'post and beam' frame like this one together.  Posts and beams were notched and joined in a pattern known as a 'bent', while lying flat on the barn floor.  During the barn raising these 'bents' (it would take 4-8 for the typical barn) would be raised by a combination of men pushing with metal pointed poles or 'pikes' on one side while a team of horses pulled from the other.  The ropes from the horse team would be routed up through a pulley on the top of a very tall 'gin pole' to get the right angle for pulling. 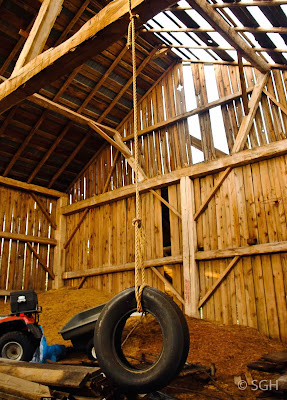 If I'd known more about barn construction when I took these pictures, I might have taken them somewhat differently.  But beyond the hanging tire swing and pile of old hay, this is the east end of the barn.  The two vertical posts (and a third out of sight to the right), and two horizontal beams, with their diagonal braces, make up one 'bent', a section of timber framing as illustrated above.  If you compare this photo to the diagram above, you'll see that the pattern is almost identical, except that our neighbour's barn only has 3 vertical posts instead of 4.  Otherwise, the diagonal bracing is exactly the same.

If you take another look at the centre aisle, I'm standing between the two central 'bents' marked by the posts and two big horizontal beams. This barn was fairly small, and only had 4 'bents'.  At the top of the front posts, which stick up above the top horizontal beams, a large cross beam known as a 'purlin' joins the four 'bents' together.  As far as I could see, this was entirely one very long squared timber, nearly 60 feet long, connecting all four 'bents'.  Here you can see the notches all cut for the base of the rafters.  Below it in the wall on the right and left are two shorter horizontal beams, tying the 'bents' together, and known as 'girts'. 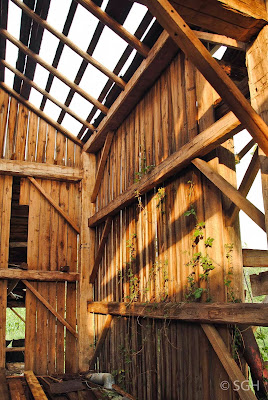 Here's another view of the back wall, showing the 'purlin' and 'girts'.   The left third of this picture is the end of the easterly 'bent' with its corner post and two beams.  On the right, the two 'girts' and the 'purlin' at the top coming toward me, tie that bent to the one just out of sight to my right.  All the roof rafters rest on the 'purlin'.  All the diagonal beams are simply braces to give horizontal strength in a wind. 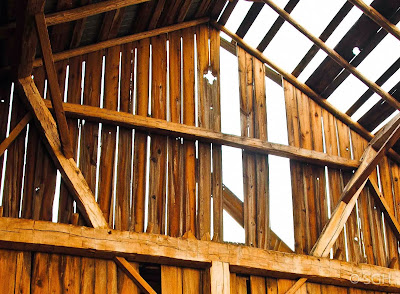 At the upper end of the barn, the two larger diagonal posts mounted on top of the horizontal beam of the 'bent' are known as 'queen posts', a common method for framing the roof of barns like this.  The upper smaller horizontal beam is a collar tie, tying the two 'queen posts' together.  You can also see the remains of a small decorative hole near the peak that probably also provided some ventilation. 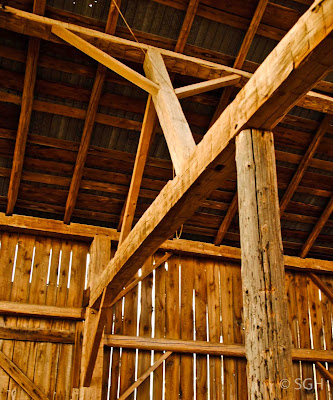 This is another 'queen post', on one of the centre bents.  As you can see, it is supporting another 'purlin', or horizontal beam for roof rafters to rest on, about halfway up the slope of the roof, with the appropriate diagonal braces for strength.

Much credit again to Jon Radojkovic for the diagram and all I've learned about timber frame barn construction in preparing this post (and tomorrow's).  But the unseen magic is yet to come - the mortise, tenon and pegged joints that hold this barn together.  Make sure you check back tomorrow to really understand what's going on here!

P.S. Sorry for all the 'content' in this post, but I've become really fascinated by understanding all this.  Hope you enjoyed it too.
Posted by The Furry Gnome at 6:52 PM