The iPhone 'Find Me' App

I have finally joined the 21st Century with all the rest of you.  I've acquired a smartphone.  Not the most recent model, nor a big data plan, but a smartphone none-the-less.  I bought it because of the 'Find Me' app, which I thought might be of interest to others in a similar position as myself.

I wander the backroads and the woods a lot by myself (not that I don't also go with friends).  I enjoy doing photography slowly, hunting for subjects, identifying things as I go, and 'sauntering' through the woods as John Muir would have said.  In my volunteer work as the Land Steward Director for the local Bruce Trail Club I have 40 properties to check on, another reason to be out alone.  And since I simply can't keep up with others sometimes, I end up alone anyway.  I wouldn't have it any other way.  I snowshoe alone, I cross-country ski alone, and I explore alone.  (I also go with groups a lot, and lead nature walks in the summer).

But my wife worries a little.  What if I fall off a cliff and break my leg!?  What if I need help?  How will she know just where I am?

We've had a map on the fridge for some time, where I mark where I'm going, but the 'Find Me' app on an iPhone does a much better job, providing an accurate map of where the iPhone (and the person carrying it) is to be found. 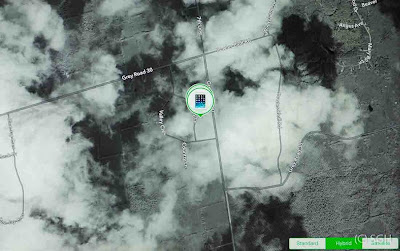 Once you set up your phone and your ipad or computer at home, this is the image you get telling you where your phone is.  It's officially called the 'Find my iPhone' app, and it uses the phone gps function to locate it quite accurately.  You can choose to show it on a map, an air photo, or a hybrid view.  This means my wife can sit at home and check on me any time, knowing within a few metres where I am, as long as I leave the 'Find my iPhone' app turned on, on both devices.

(In my wife's more jovial moods, since I've threatened to die of a heart attack on the trail - in 25 years mind you - she refers to this as the 'Find my Body' app.  She wants closure!)

(Unfortunately this uses Apple Maps, and the image for our area is largely cloud-covered as you can see above, but the roads are accurate.  Also inappropriately this could be used to 'track your teenager' - except most teenagers are probably smart enough to turn it off!)

For us this is a huge step forward in safety and reassurance.  My wife can relax and I can continue to explore the woods on my own.  I expect this might be something of interest to others like me out there.

In the meantime I'm also discovering some of the other benefits of a smartphone, as I've joined the 'texting generation'.  Our children, nieces and nephews, and my sister all communicate by texting.  I've picked that up quickly, and now we're in touch with our children and relatives more easily than any time since they left home years ago.

And then there's 'Facetime' between Apple devices (similar to skype on any computer), so we can chat face-to-face with our grandson as often as we want - and others who are close to us.

Now I'm sorry I didn't discover the value of a smartphone earlier, and I think it will be a very useful bit of modern technology.

However, don't think I came to this decision easily.  There were numerous reasons not to get a smartphone running through my head!  At whatever charge a month for the rest of your life, I view this as a very big purchase.  I expect that for young people online frequently, their cell phone/internet bill over a lifetime is their 2nd biggest cost after their house.  For me, I saw this as a $10k purchase over 20 years.

But on balance, this is going to make a significant difference in our lives.  My wife will be much more reassured and I can spend my time exploring safely on my own, so I'm now slowly learning to use my iPhone, and just leaving the 'Fine Me' app turned on.