The entire crop harvest here extends from early hay cutting in June through until the final corn harvests in November - by which time next year's winter wheat is already coming up out of the ground.  But late summer is the highlight of crop harvests, just as it is for veggies, so it's a major mark of the seasons. 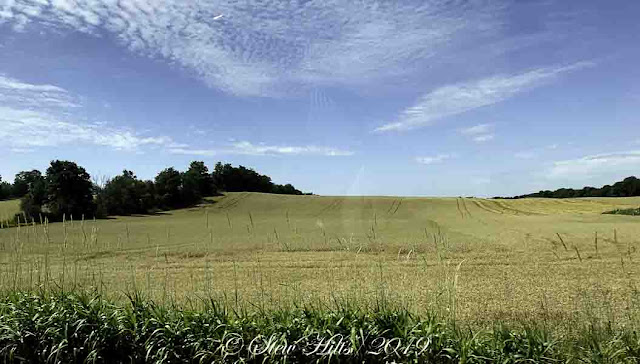 There isn't a lot of cash cropping around Meaford, but a drive a short distance south and we're passing lots of crop fields.  This is a partly combined field of wheat just outside Rocklyn.  The beautiful golden wheat fields symbolize the start of the grain harvest. 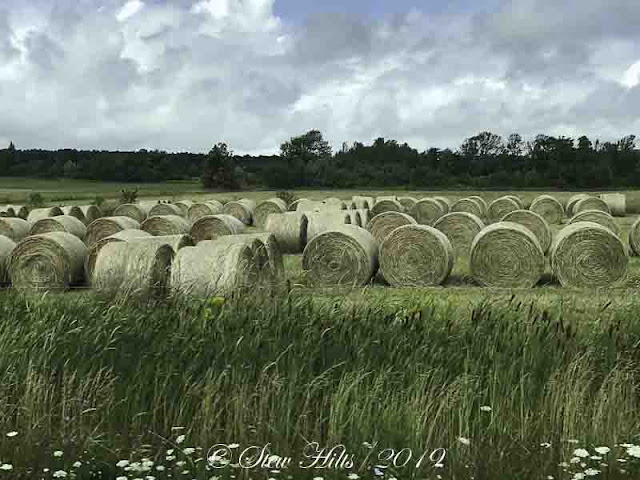 But the hay harvest was finished some time before that, and there are a lot of hay fields around here, so we've seen a lot of hay bales over the summer - all a slightly greenish brown. 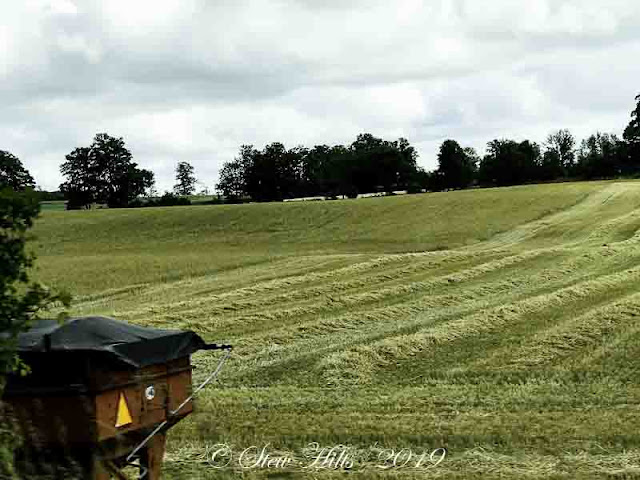 Many farmers here also use their balers to roll up big round bales of wheat straw after the combines have gathered the grain. 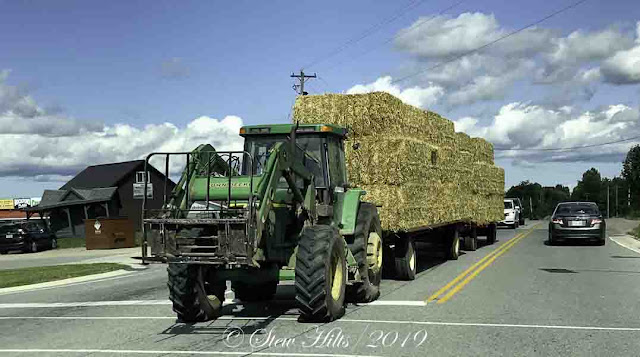 But this farmer obviously has the type of baler to build the big square or rectangular straw bales that usually get sold on to horse farms or race tracks.  Wheat bales are golden brown rather than greenish brown. 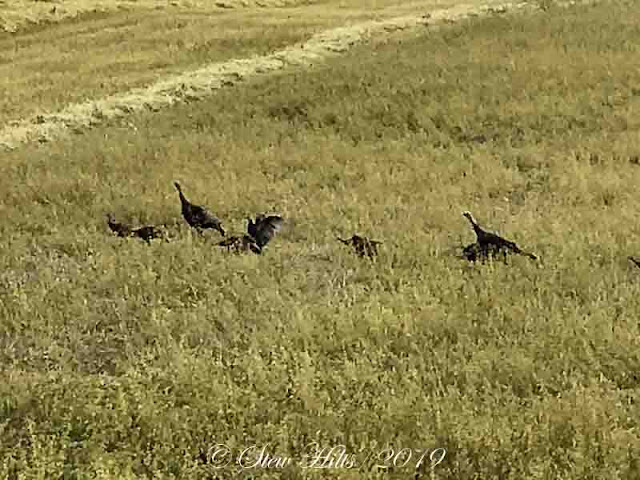 Lots of corn fields around, which still have lots of time to grow, 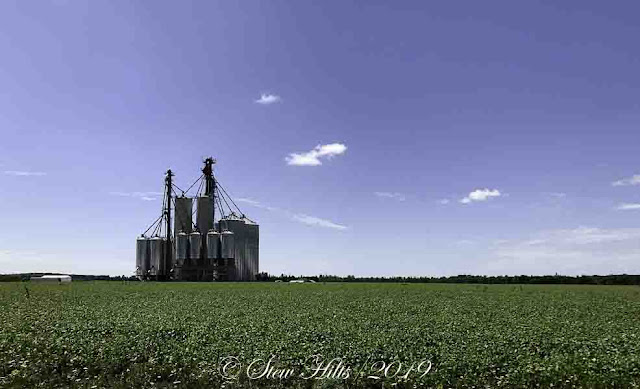 And lots of soybean fields too.  Most of all of these grains will find their way to an elevator like this eventually, though a small bit of it may be grown for in-farm use as livestock feed. 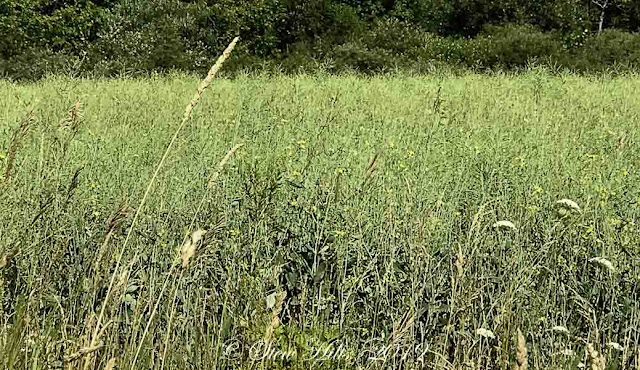 This is the only canola field I've seen this year.  You can spot a hint of the yellow flowers that make canola such a beautiful crop earlier in the summer, 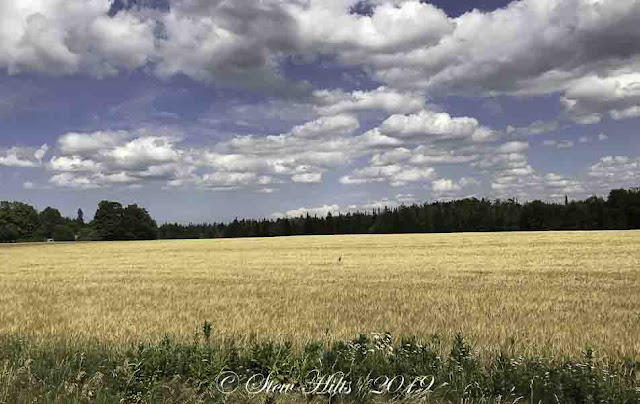 A golden barley field, though it will get harvested later than the equally golden wheat fields. 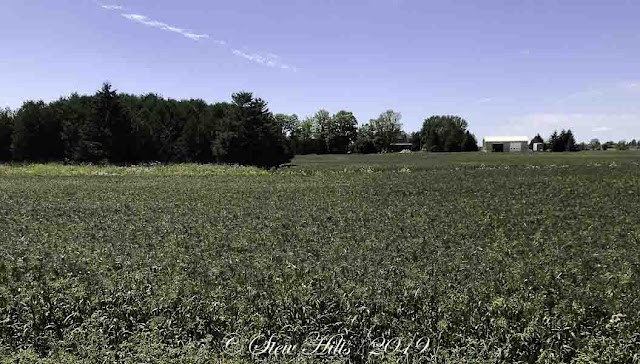 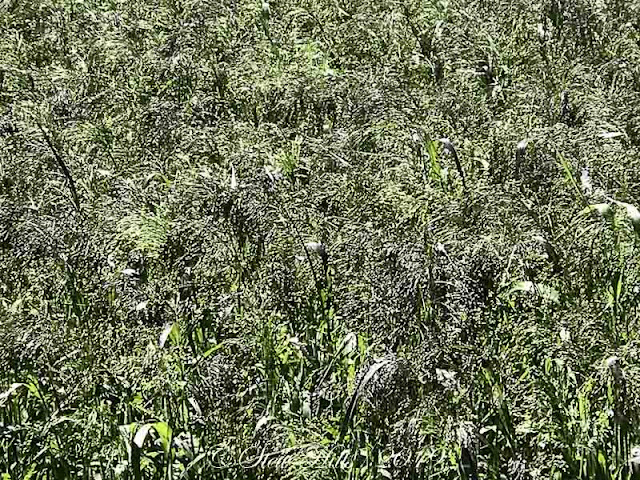 One of the more unusual crops, millet, a shorter, darker green than other crops, with feathery strands of tiny seeds at the top.  This is probably proso millet, the grain type usually grown in North America.. 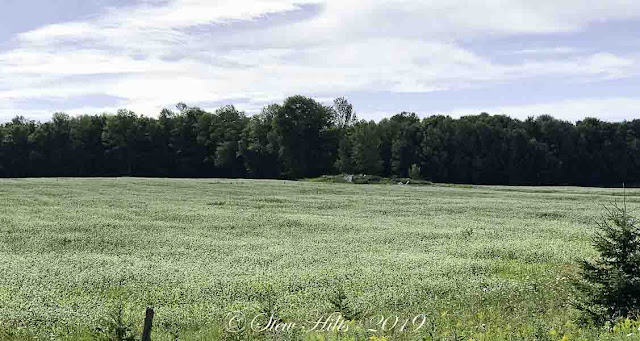 And the most unusual we've seen this summer, a field of buckwheat blooming white in the sun.  Buckwheat isn't a grain at all, but is actually related to rhubarb among other things.  It best known among those who enjoy the dark, strong flavoured buckwheat honey.

Do you find yourself confused between hay bales and straw bales like I did?  Hay is a mostly grass crop where the entire stem is harvested; the protein for cattle is in the seed head.  This is why you don't want to use hay for garden mulch - all the seeds are still in there, but it's good for cattle feed.  Many cattle here live on hay year-round; grain such as corn is only used as a supplement.  Straw bales are what's left after the grain has been combined, in other words all the wheat seeds have been removed.  Straw by itself is very poor cattle food, but it's great for bedding for horses and cattle (and gardens).  Hay is usually harvested in early summer here, while wheat is harvested in late summer.
A combine is a machine that combines the now out-of-date operations of reaping, threshing and winnowing.  One pass trough the field and you've got it all done.