A busy weekend here.  Our son and his wife took us out to a unique farm dinner held in a barn on Sunday, and Saturday we went out for lunch and then the Grey Roots Museum to see the new exhibit on fire fighting.  We found it very well done. 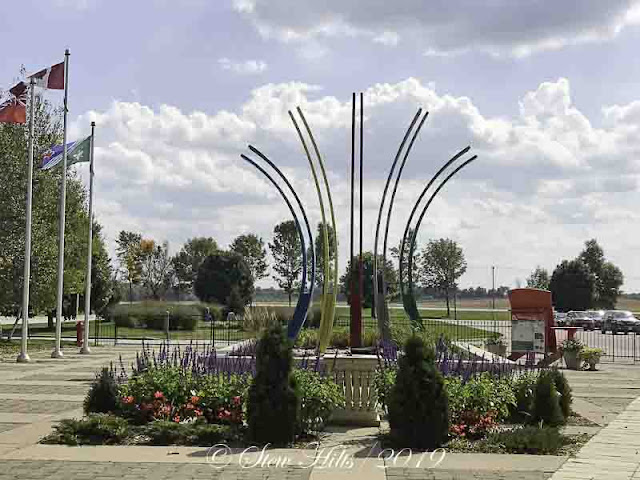 We bought a membership in the Grey Roots Museum this year, and so far it's nearly paid for itself twice over, and we still have the Fall Lecture Series to go.  They change exhibits regularly too, so there's often something new to see. 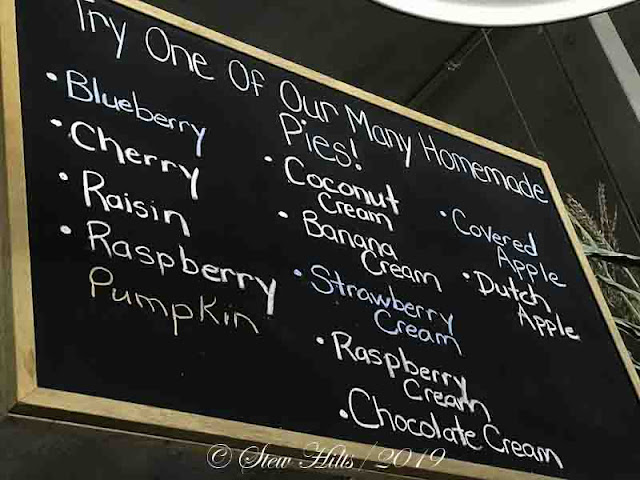 First we stopped at 'Kettles' for lunch though, a popular place on the highway just north of Chatsworth.  We know we'll get good food there at a reasonable price. 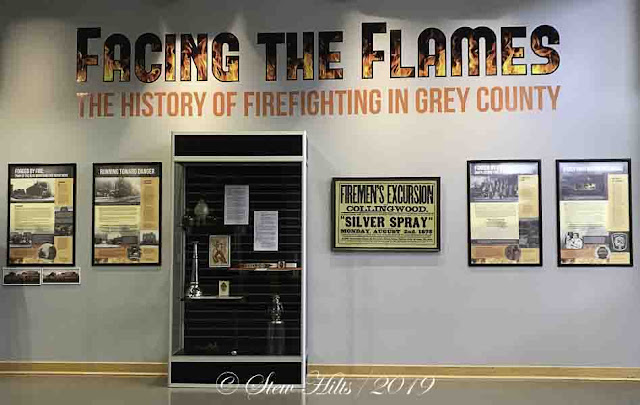 The exhibit we were there to see was the  just-opened 'Facing the Flames' exhibit.  Opening night was the night before, but it was very crowded; today we had the place almost to ourselves.  With my chair, that helped a lot. 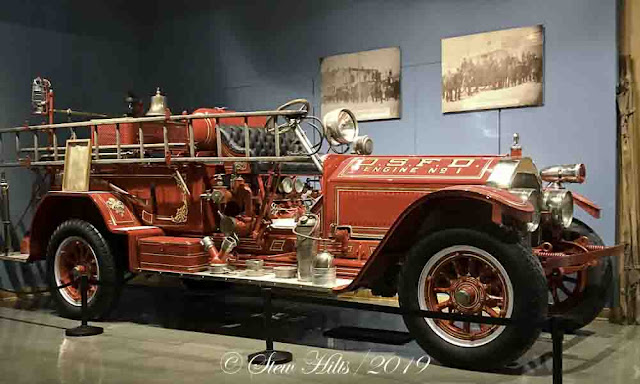 The star of the show was the Owen Sound Fire Department Engine No.1, the original fire engine here, beautifully restored by museum volunteers.  More photos of it tomorrow. 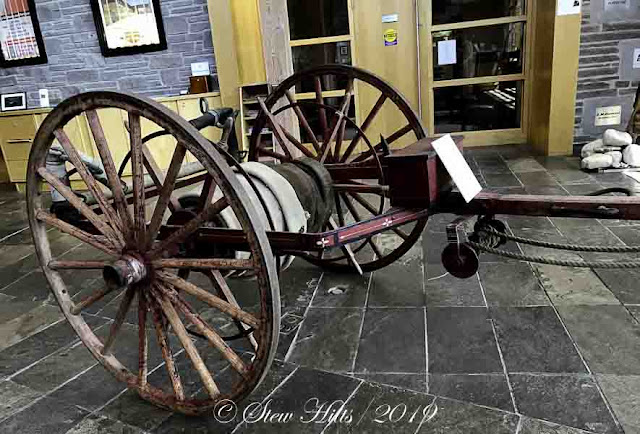 An even older fire hose wagon that would have been hauled by horses was parked in the lobby. 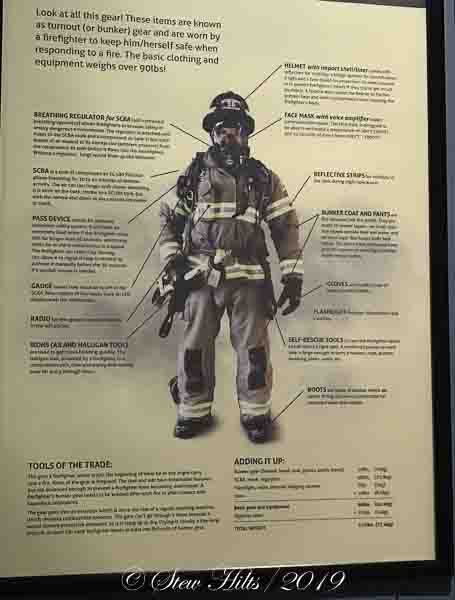 But more than these displays there were quite a few interesting information panels.  You would learn a lot going through this exhibit if you stopped to read them all.  Here I learned that a fireman's full kit if he was pulling a hose weighs about 170 lbs.!!   You try even picking up 170 lbs.! 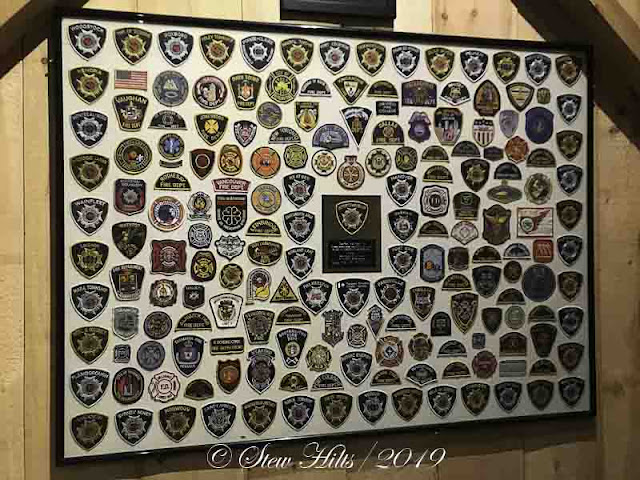 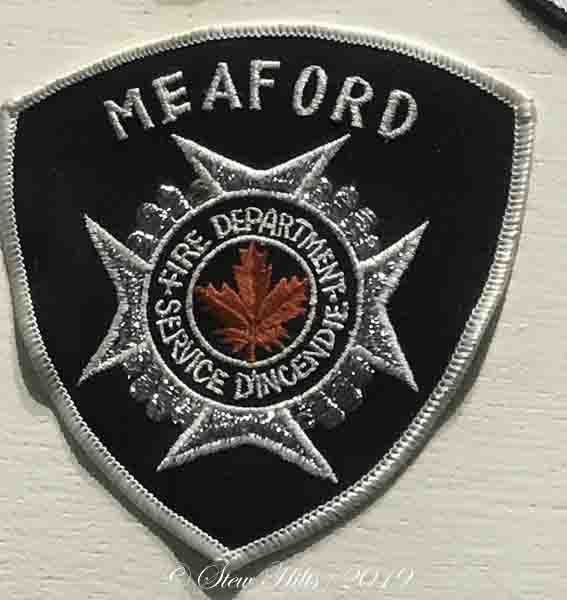 An interesting piece was this large collection of shoulder flashes.  I found Meaford's, and learned that the Maltese Cross is the most widespread badge of honour for fire-fighting.  It dates back to the Crusades, when guns were not invented but naptha was, and fire became a weapon of war.  Crusaders who tried to rescue their brothers were later seen as the first firefighters. 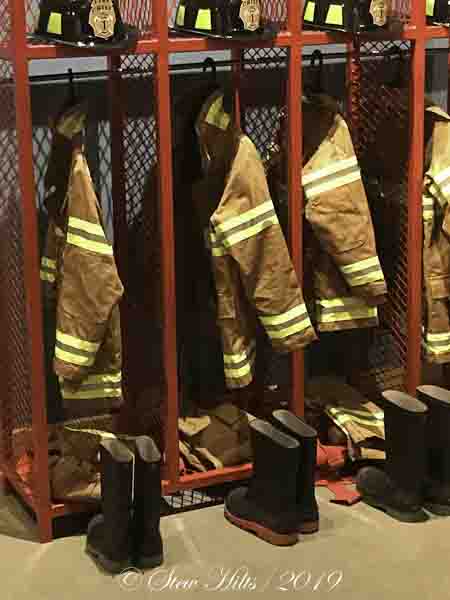 The cleverest part of the exhibit in my view was a set of miniature firemen's suits, about right for a ten-year-old.  They could press a button to set the timer, scramble up a short stairs, fling themselves down a short firemen's pole, and try to get the whole outfit on before the timer went off.  This is my only picture of that, because the child there didn't want to take their suit off and I was trying to avoid getting them in the picture! 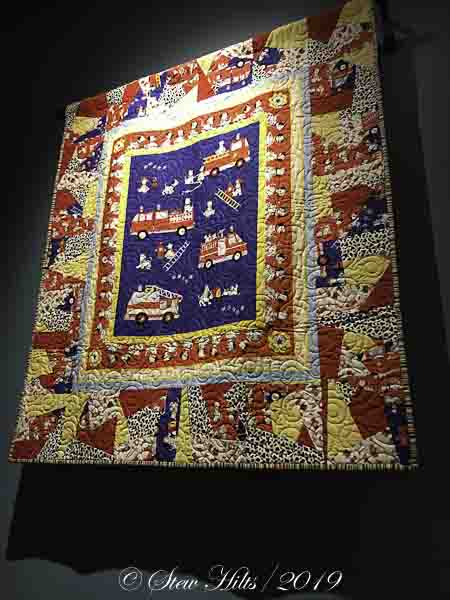 An interesting bright fire-fighting quilt there too.  Tomorrow more on the O.S.F.D. Engine No.1.