Meaford sits where it does because it grew around the harbour at the mouth of the Bighead River.  The next valley west from the Beaver River, this is a very rural watershed, flowing largely through a drumlin field and moraines slowly northeastward into Georgian Bay.  Early settlers petitioned to have land set aside for a harbour, and that's where the town grew.

This is one of the more scenic stretches of the Bighead, just upstream of town, the spot where John Muir spent his time working at the Trout Hollow sawmill in the 1860's.  I'll be bringing you back here, but today I'm going to tour the river. 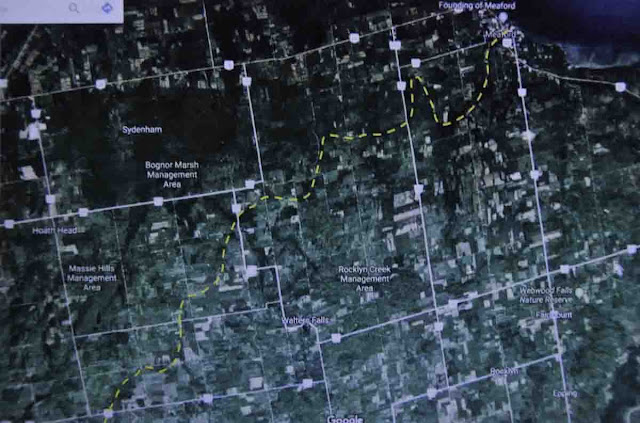 Here's another of those terrible maps, but it may show a little of the watershed.  I've indicated the very approximate route of the river in the yellow line.  It's heavily forested for an agricultural landscape, with a lot of marginal farmland, mostly beef cattle.  On the northwest side there is a huge wetland complex, the Bognor Marsh, which I will undoubtedly write about in the future.

By the way, thanks for all those great detailed responses to my question about preparing maps for blog posts.  I'll be experimenting with all your advice and trying to step up my game with more maps.  Thanks for taking the time to write your comments. 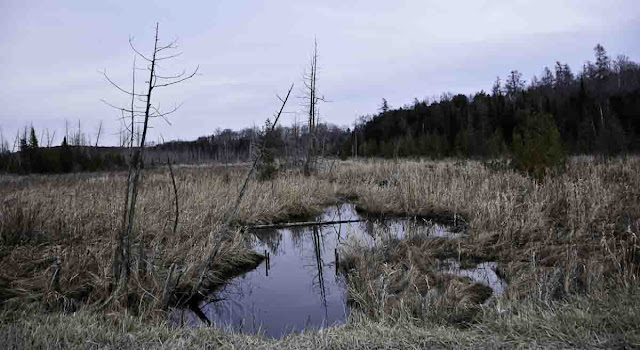 Our tour starts at the upstream springs, where the river emerges as a small creek in some large wetlands.  I couldn't get any further than this culvert coming out under the road. 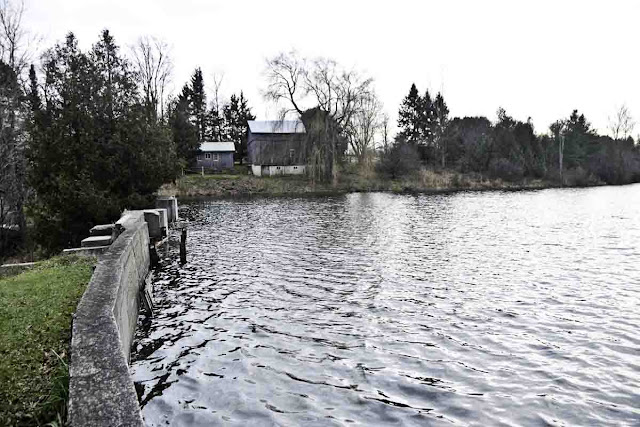 A few concessions downstream the river flows through the hamlet of Massie, where there's a substantial old milldam creating a nice pond. 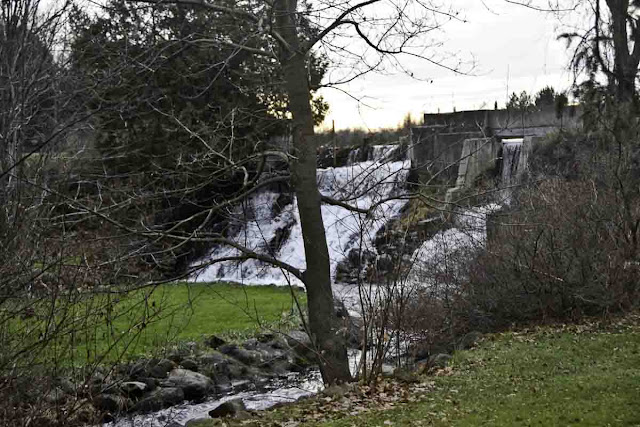 The waterfall over the dam's spillway seemed to be in a backyard, but I got this shot from the roadside. 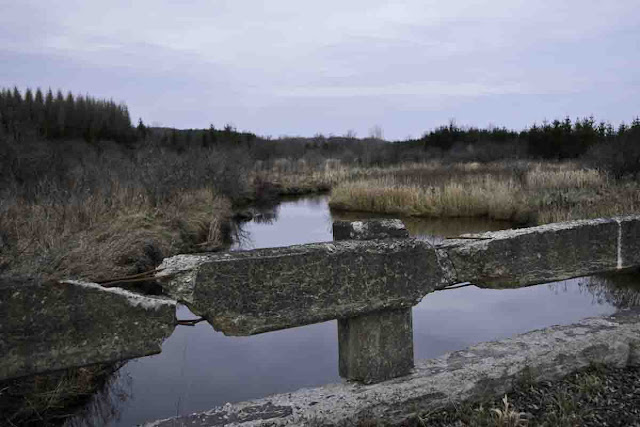 Below this point the river meanders through farmland and scrubby valley bottoms heading generally northeast.  Some of those rural bridges aren't in very good shape!

This is a view of the Bighead Valley, a broad shallow valley for the most part, and at this point quite open farmland.  The river is down there among the trees.  There are lots of drumlins though, so you often get quite a view across the valley from one of the high points. 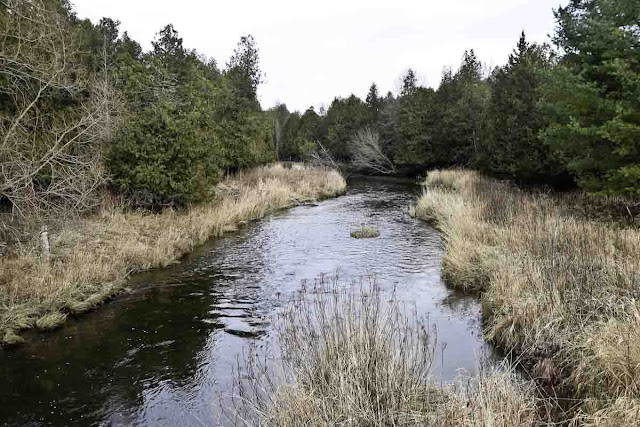 The river swings around the north side of the hamlet of Bognor, where we have been crossing it regularly on our back route to Owen Sound.  At this point it's getting to be a good size, not just a little creek anymore.

As it continues toward the bay, parts of the valley are quite flat along the river, and widely used as pasture. 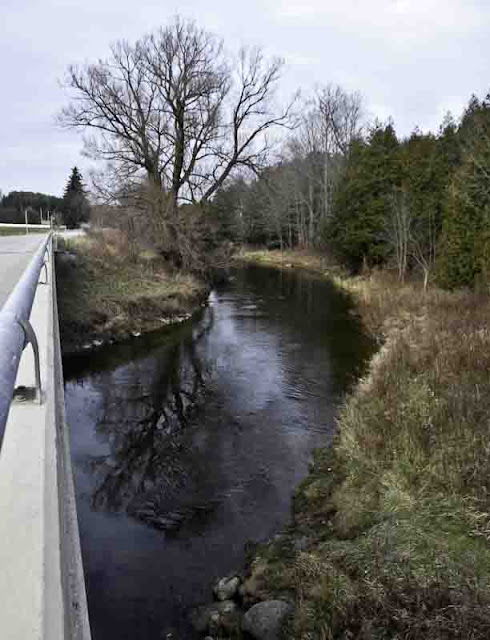 The river is a popular fishing spot too, and I understand the fishing, for Rainbow Trout and migrating salmon, is quite good.  This is a stretch I have canoed in the spring when water is high enough. 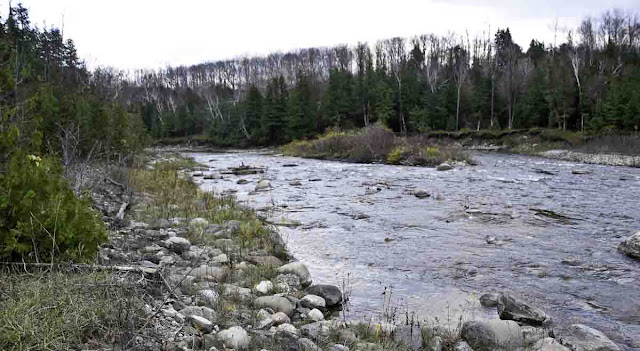 Just before town the river breaks through the old Algonquin glacial lakeshore, generating a stretch where I would not want to canoe, for bouncing the canoe off the rocks!  There's quite a current for a mile of two - where the old Trout Hollow sawmill was located. 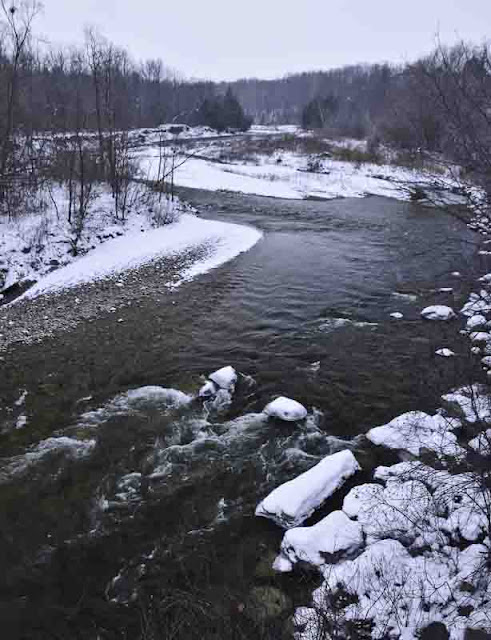 After bursting through that barrier, the river winds down to meet the first bridge in town, the 'Bakeshop Bridge' - must be some history there, there's no bakeshop now! 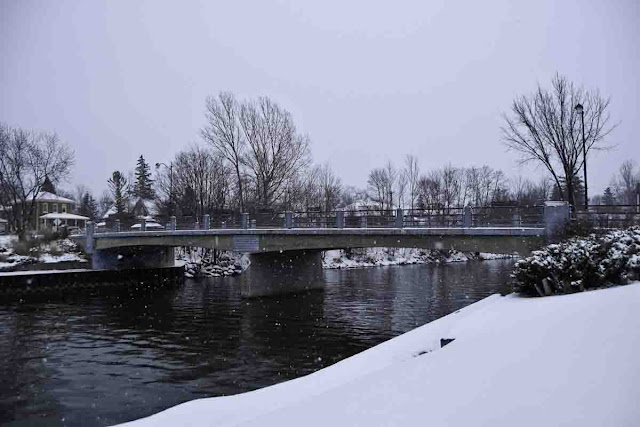 A couple of blocks later the Bighead emerges under this last bridge, and .... 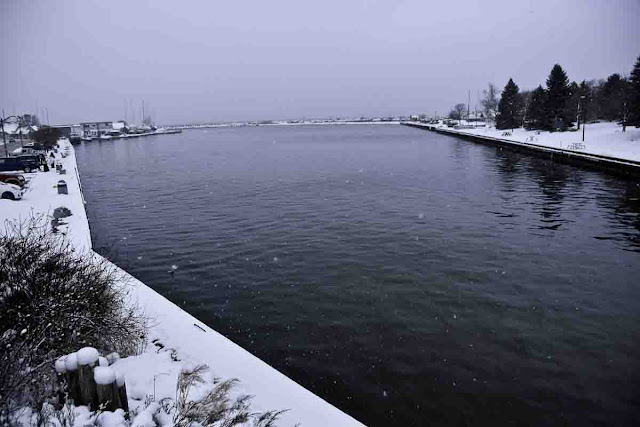 out into the harbour.  I haven't had much chance to gather more information on the Bighead, but I'll be doing that, and sharing more in the future once I do.  In the meantime, the river is a major part of Meaford to me, and I'm sure I'll be exploring much of the watershed over time.

Temperature rose above freezing today, and the light fluffy snow is now soggy and wet.  But going down below again tonight, and at least a little light snow in sight for several days in the future.  Pretty quiet day here, I'm suddenly sleeping a lot during the day as well as at night, but I guess my body knows whats good for it.