Picking up on the past two posts, we didn't quit our walk at the crevice, but continued west on the trail to find more interesting features along the way. 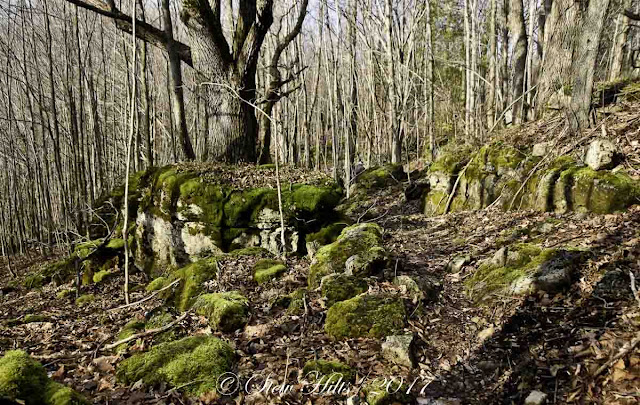 It was one of those bright sunny late November days with no leaves left when the green moss dominated the woods.  Mostly a young forest, but a few big trees here and there. 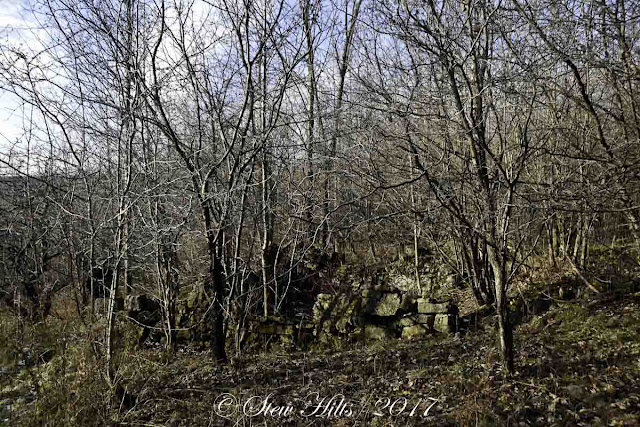 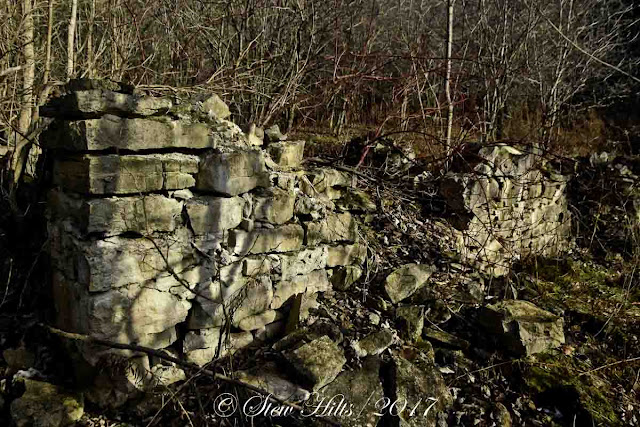 The next thing we found was an old cabin foundation.  Presumably an early settler's cabin.  No sign of old logs, but stone would have been easy to find!  How they cut those square corners 150 years ago with only simple tools is another question! 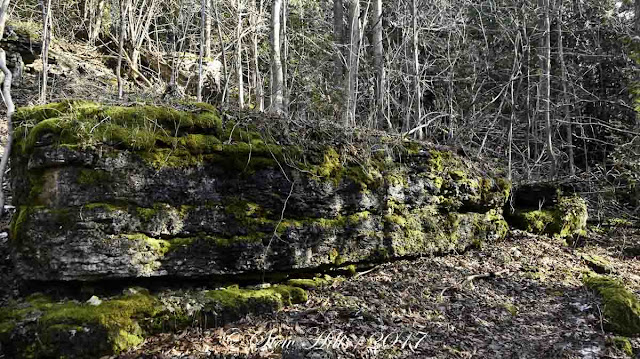 Some of the limestone ledges along the trail looked like they could have been man-made, such regular horizontal lines in the rock. 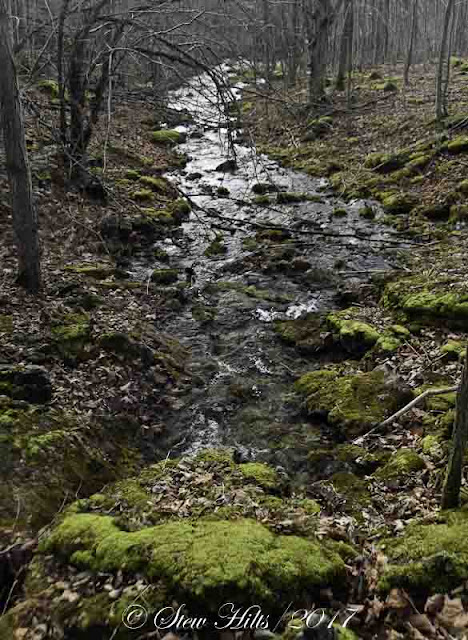 Then we reached the spring.  This is one of those disappearing streams that reappears at the foot of the escarpment slope as a spring.  Limestone tends to be full of cracks, so the water flows underground for a ways, and then re-emerges when it hits the impermeable layer of shale hidden beneath the limestone. 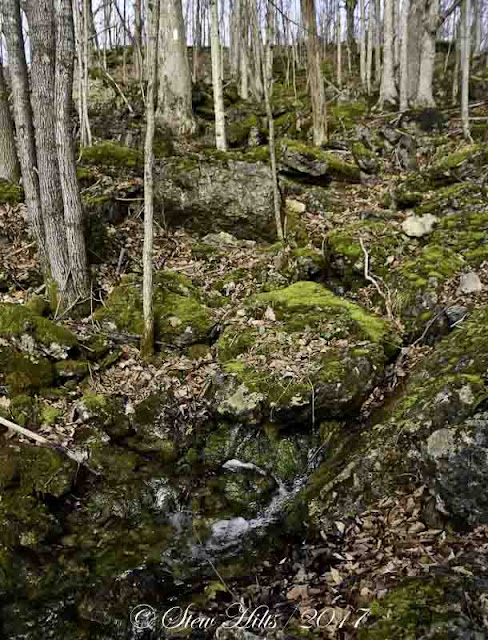 This is the main spring itself, pouring out of the rock.  In fact, this is an ephemeral waterfall, because in the early spring melt there is so much water it won't fit in the underground passageways.  For a brief few days the water forms a creek flowing over the edge of the hill. 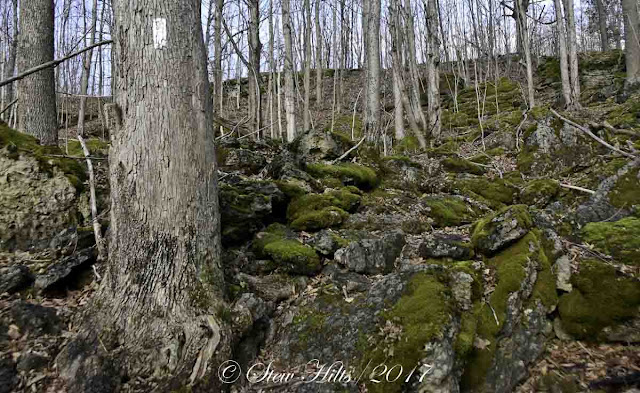 Looking up from where we stood today, the hill was dry.  But my buddy and I had been in here a year ago March, to find the ephemeral waterfall, and our timing had been just right! 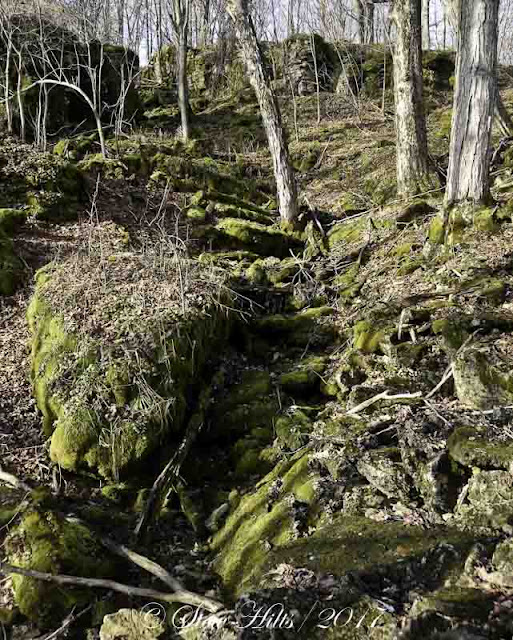 This is one of the water channels curving uphill, a dip in the rocks covered with moss at this time of year. 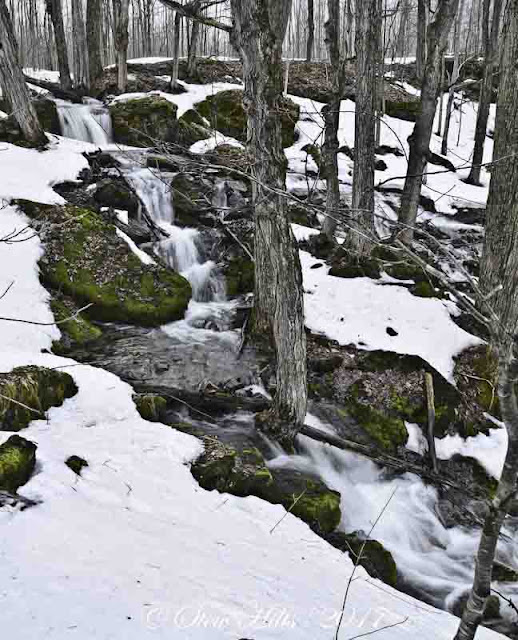 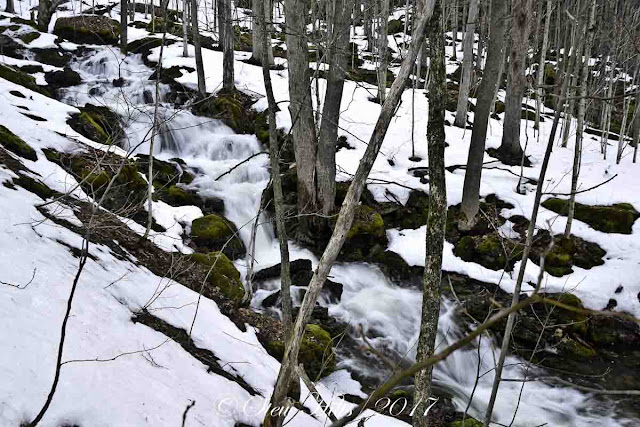 And here are a couple of pictures of the 'disappearing stream' when it was flowing, March 10th, 2016.  Not exactly the same view, because we had come from the west that time, and could not find a dry way to get across the stream.  This is the sort of unique time-limited seasonal feature I love to find along the trail. 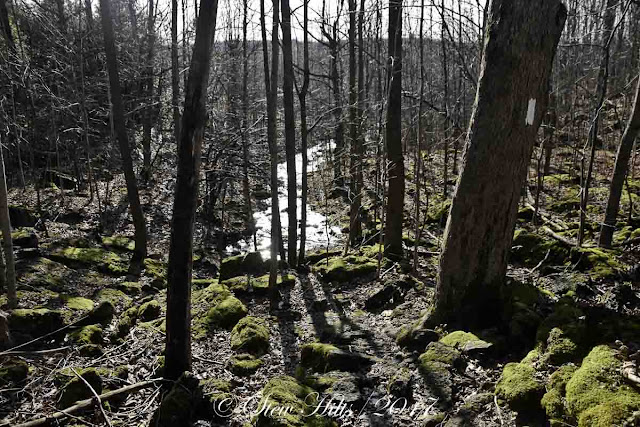 After gazing at the spring awhile, and contemplating the comparison with our March visit, we turned around and headed back. 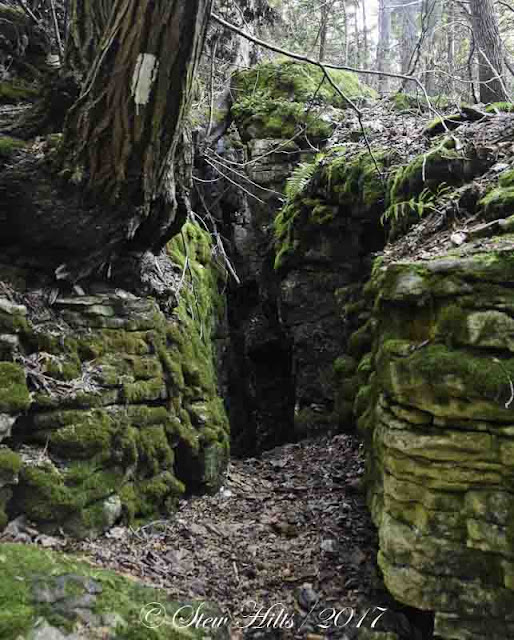 Straight into that crevice again, and out the other end.  The entire stretch here, from the village of Woodford to the township line will undoubtedly be one of my favourite hikes nearby, relatively easy walking, close at hand, and several interesting things to see!

Crevice Caves - a couple of commenters yesterday compared the crevice I featured to a slot canyon in the southwest, a good comparison.  Both are narrow 'slots' or 'crevices' in the bedrock, open to the sky.  But the southwest slot canyons are eroded by water, and many of them I gather are subject to flash floods which could be quite dangerous.  In contrast these limestone crevices are created by the bedrock at the edge of the escarpment separating or 'cracking open' along the fracture lines of the limestone.  I have never seen water in one, because the cracks probably extend down into the rock below and the water just disappears.  They can be quite wide and deeper, or narrow like the one I showed yesterday.  As I said, I'll pull together some more examples and post them sometime.