We got snow -- boy, did we get snow!!  The ground was already white, though the driveway was bare last night.  Snow started gently Christmas Eve, but Christmas morning, the snow squall decided to park itself right over Meaford, and the snow piled up relentlessly! 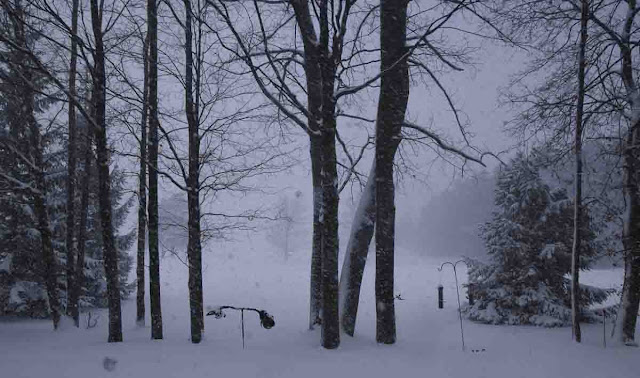 Heavy snow accumulation here is all about snow squalls, usually lake streamers coming off Lake Huron or Georgian Bay, but it all depends on where those streamers go and how fast they move. 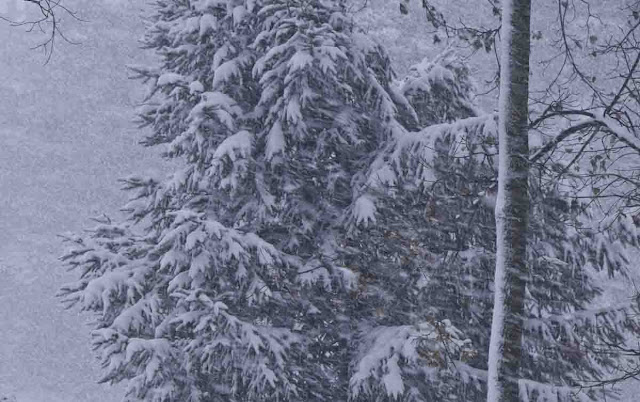 Well, this morning they came here, and they didn't move, for about three hours.  The snow was blown by a brisk west wind and piled up around the house quickly. 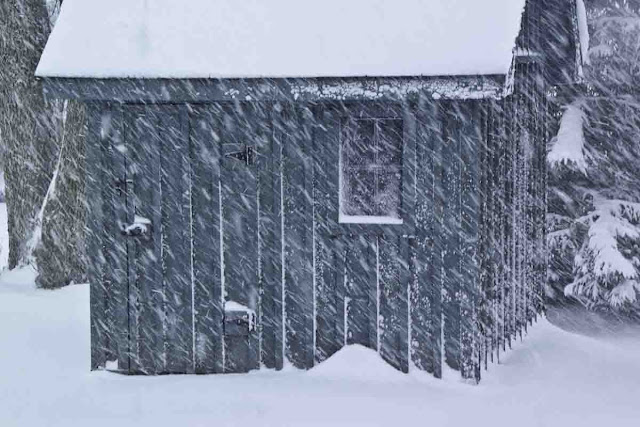 I'm sure the camera was asking itself 'what the heck am I supposed to focus on here?' 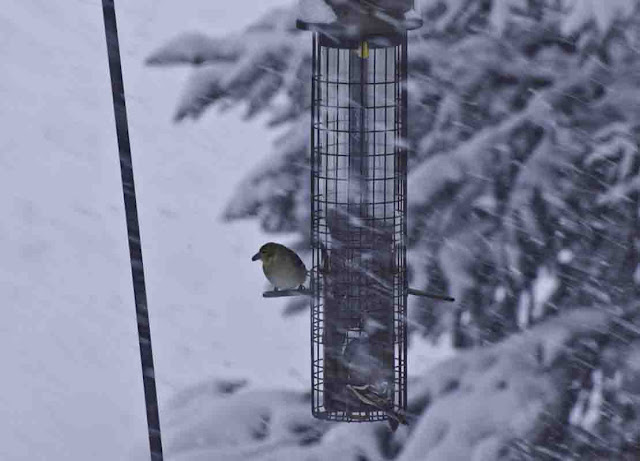 Not many birds today, it was just too windy for them, to say nothing of the snow blowing in their face. 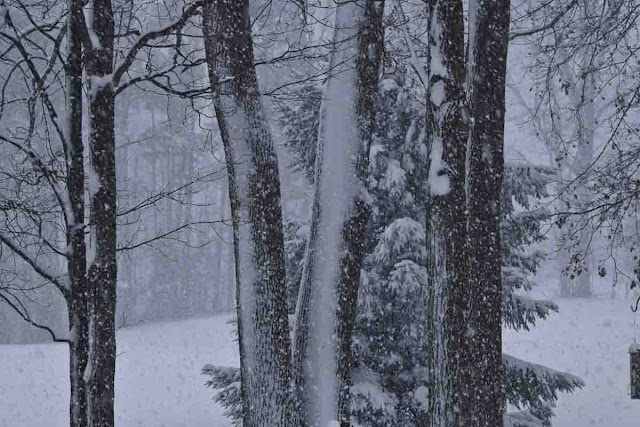 But I did struggle into the mukluks and get out to feed the birds, and along the way got some good shots of blowing snowflakes if nothing else! 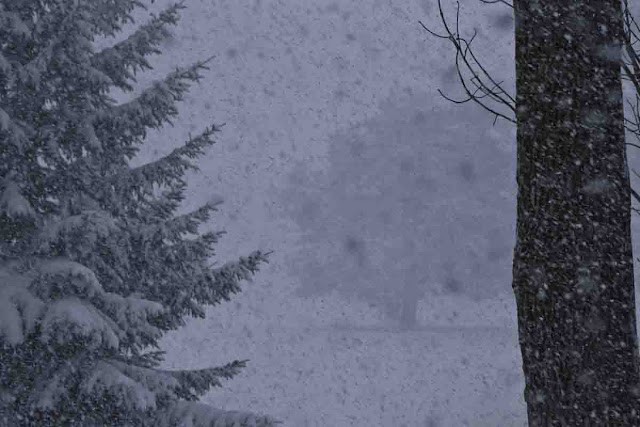 At this point the snow was sticking to the outside of the windows, leaving visibility pretty minimal. 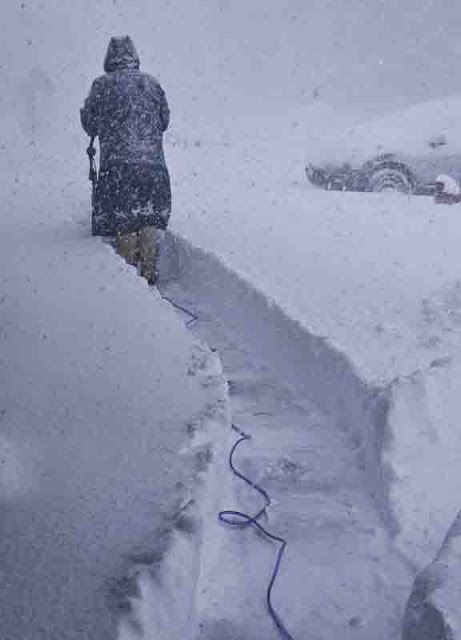 But Mrs. F.G. has been taking her care of me very seriously, not allowing me to touch a snowshovel, so she bundled up in her Yukon parka and mukluks and by late morning got out there to start clearing the driveway. 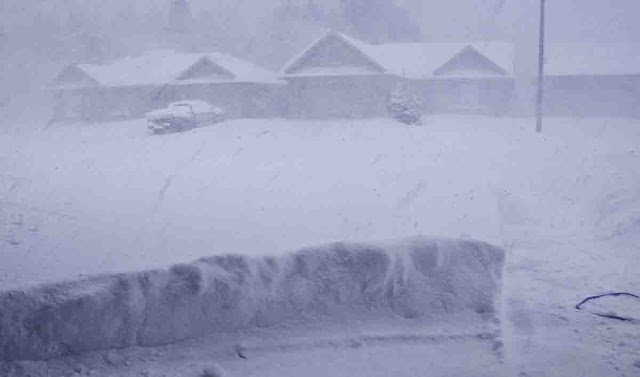 You get some idea of how deep it was here, where she cut across the front of the garage with the blower.  About 15" or 35-40 cm. on the level. 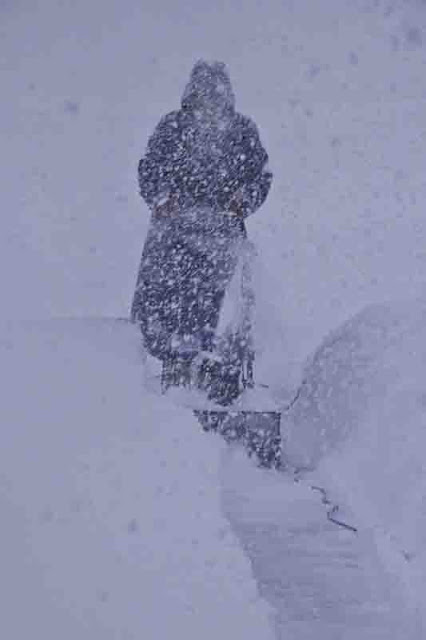 Secretly, she has discovered she actually enjoys it, a refreshing bit of exercise on a winter's day.  And the neighbour came over again with his bigger snowblower and finished the last half for her.  We're feeling welcome in this neighbourhood! 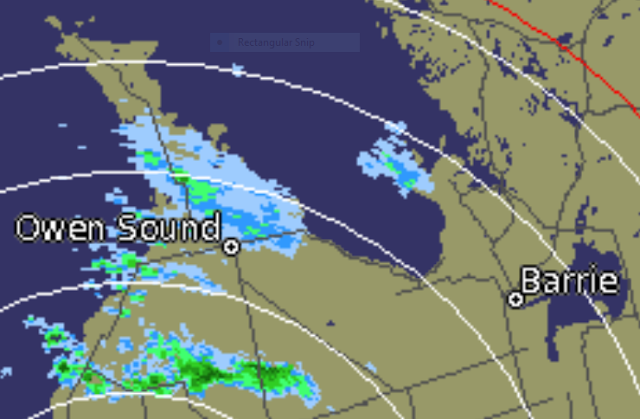 You can see the streamer off Lake Huron blowing southeast here, the dark blue (heavier snow) ending just about where we live on the west side of Meaford, where the road east of Oqen Sound hits Georgian Bay.  Shortly after it decided to drift on eastwards, and we were left with some beautiful sunny breaks.  Couldn't have been a more christmassy Christmas Day!