Orienting Myself to Meaford

I've always noticed that I have a good sense of spatial orientation.  I know what direction I'm facing; I have a mental map of streets and roads and can place things in the right location in my mind quite well.  I can mentally review my drive along country roads and remember what I've seen  But orienting myself to Meaford is proving a challenge. 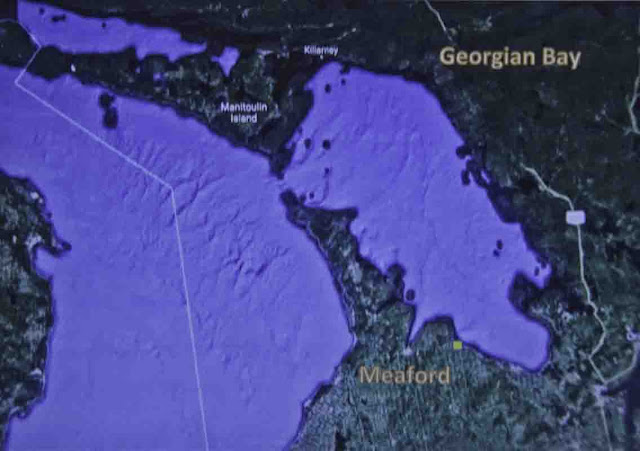 Let's start with the big picture.  That's Georgian Bay on the right side of the picture, with the location of Meaford marked.  Lake Huron is the larger body of water on the left, with a bit of Michigan showing up on the west.  I've always had an (incorrect) mental map of Georgian Bay running more or less north/south, but as you can see, the long direction is significantly northwest/southeast.  And that huge bay at the south of Georgian Bay, Nottawasaga Bay, is more obviously a bay in its own right than I realized.  So I'm trying to get this new mental map in my head.

Jumping to Meaford, on a clear day when I look straight out from shore, I see this island in the distance.  What is it, and where?  There's no major island out in the middle of the bay here that I know of. 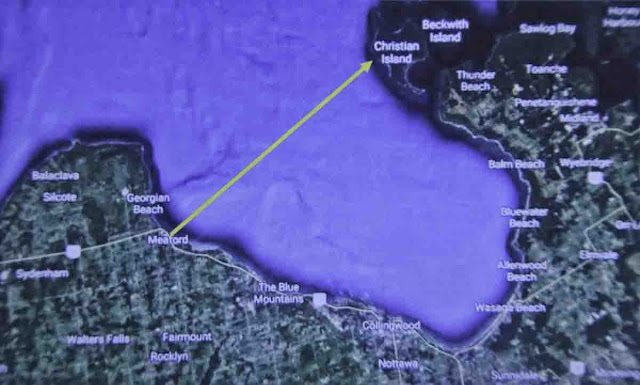 But if you take a closer look at where Meaford is, you can see that if I look straight out from shore, I'm not actually looking north, I'm looking northeast.  And if you extend that line, it turns out I'm seeing Christian Island straight out ahead.  I'm really just looking across Nottawasaga Bay, not north into the much bigger Georgian Bay at all.  You can see to the left and north of Meaford that the shoreline actually extends almost north, this being the east side of the large Bayfield Headland between here and Owen Sound.  And it forms the northwest corner of Nottawasaga Bay.  I have to look out beyond it to be looking north. 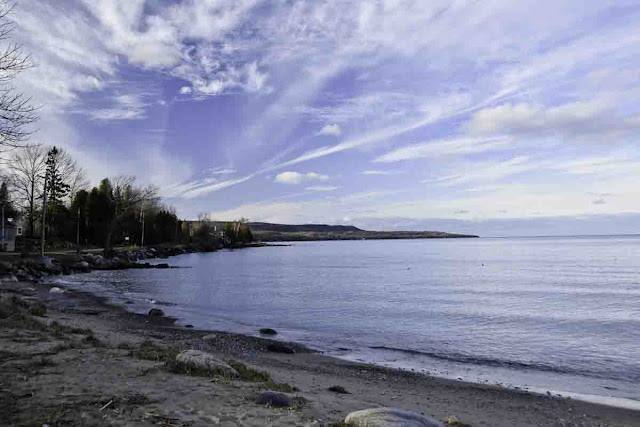 And this is a view that does just that, from a tiny bit of beach where I can access the water.  Looking past the Bayfield Headland on the left, the open water on the right leads straight north into Georgian Bay. 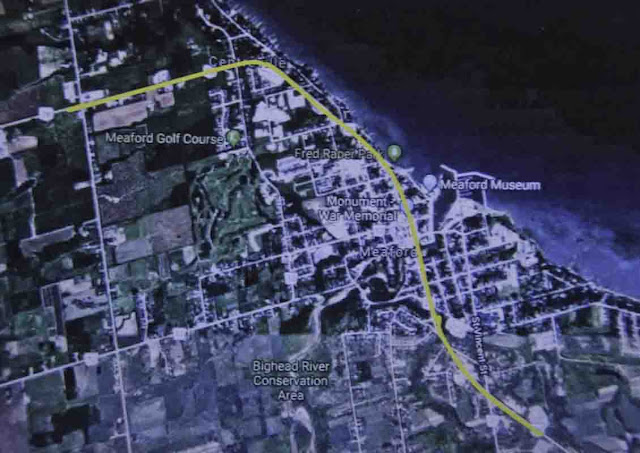 As for Meaford itself, I have seldom been so confused with my mental map of streets, and the problem is that shoreline, which actually runs northwest/southeast, not east/west.  As well, the main highway through town which curves surreptitiously, leaving me thinking it's running east/west, while it's actually running much more north/south.  When I drive in from the left, down those streets toward the shore and think I should be facing north, I'm actually facing nearly east in places where those streets hit the shoreline, though I'm finally getting used to it.  This exercise of looking at maps a little more carefully has helped me.

Since I can't get out and about for pictures, I gathered some in advance, and this week I'm going to lead you through my thinking about the significant things of interest to me here in our new home town.  Getting myself oriented was step one.  Over the next few days I'll tell you a bit about the river, the geology, 'The Base', industrial history and the harbour, local heroes like Beautiful Joe, and the time spent here by the great conservationist John Muir in the 1860's.  Don't know what comes after that, but join me as I get to know my new community.

Maps - you would not believe the awkward series of steps I went through to produce those maps above, and they're still terrible!  I first photographed the map images off my computer screen, from Google Maps.  I then edited those images and pulled them into a Word document, where I could use the draw function to add the lines and labels.  I printed those, and then I photographed them, loading the new images back onto the computer.  There has to be a better way!!  Any suggestions for how I can best learn to produce maps like these, where I add my own labels and lines, would be much appreciated.

Snow has turned from light fluffy flakes with -10° temperatures, to just above freezing now, and it's great packing snow for a snowball fight or snowman building.  Tomorrow some light drizzle.
Posted by The Furry Gnome at 7:20 PM