Closely associated with industry in the harbour at Meaford was the Northern Railway whose western terminus was here from 1872 until 1984 when service was discontinued.  The route was retained however, and today this is the Georgian Trail, extending 34 km. from Collingwood to Meaford. 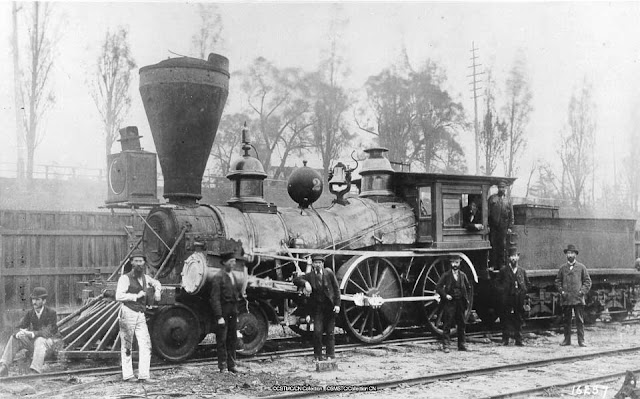 It's hard to imagine today the excitement that preceded the coming of the railway.  Towns promised 'bonuses' (piles of cash) to attract the railroad, and 'Mad Cap' Capreol, the entrepreneur who initially incorporated the Ontario, Simcoe and Huron Railway, was the man who could make it happen.  In fact he was fired before the first sod was ever turned, but the railway, renamed the Northern Railway, was built from Toronto to Collingwood in 1855.  This is 'TheToronto', the 2nd locomotive built for the company.  The Northern beat the Great Western as the first working railway in Canada West by 6 months. 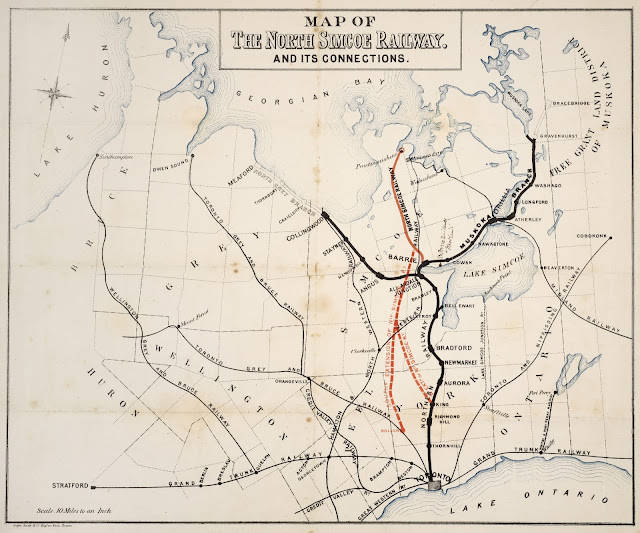 One of the early railway maps for this part of Ontario (then Canada West, a British colony), shows the main route and three extensions.  Initially they resisted expansion westwards, and a rival, the Toronto Grey and Bruce Railway slipped by on a route to the southwest to reach Owen Sound.  Shortly after that, the North Grey Branch was built, extending from Collingwood through Craigleith and Thornbury to Meaford by 1872.  Later branches to Muskoka and Penetanguishene were built.  The Muskoka Branch became the foundation of the rail route to northern Ontario, and eventually west to the prairies and is still in use. 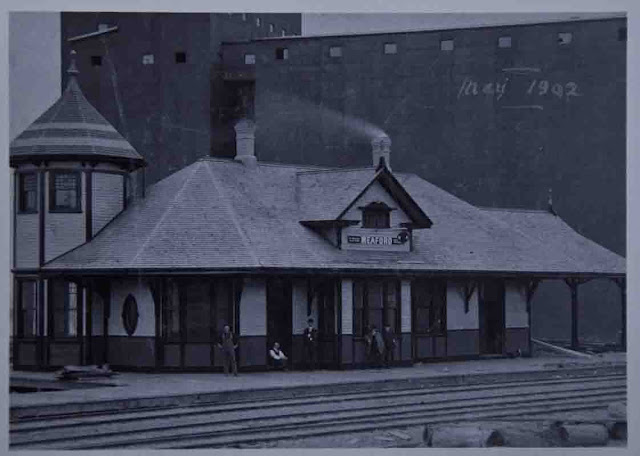 Passenger service in Meaford was popular.  It would be quite a journey to get to Toronto otherwise in the early days.  The station was located right down on the docks, the grain elevator in the background here.  There is no trace of it today. 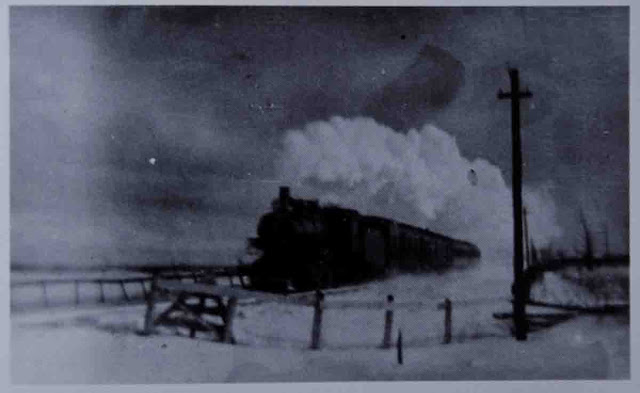 A blurry historical picture shows the steam train roaring across the fields east of Meaford.  Agricultural products were the major freight, so much so that the line became known as the 'Oats, Straw and Hay'.  Remember that in the early years, transport in Toronto was by horse and buggy, so feed for horses was actually very important.  There was a huge population of horses in the city, and they all needed their oats, straw and hay.  Horse manure was our first major urban pollution problem, in the 1890's! 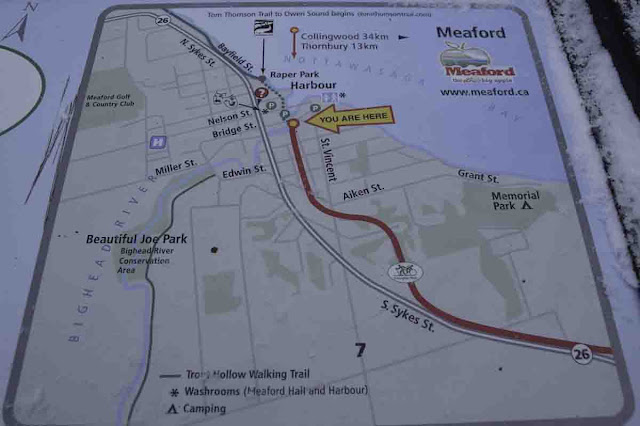 Now the rail line is gone, and the Georgian Trail has taken its place, but the route is the same.  You can see it curving into town from the southeast right down to the docks.  Originally the rail line then curved around the headland on the right, encompassing the arrowhead on this diagram, and ending about the word 'ARE'. 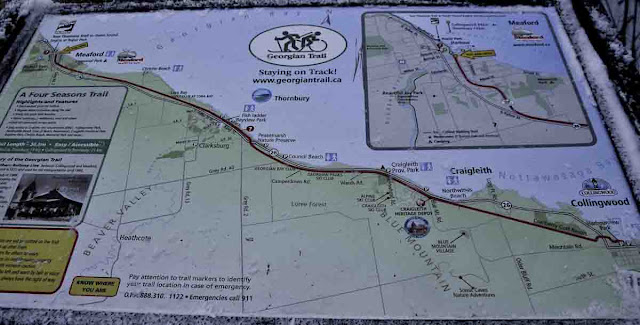 The entire route of the trail runs from Meaford through Thornbury and Craigleith to Collingwood.  And it's all a very well maintained trail, easy for both bikes and pedestrians.  There's been a major effort to create, build, promote and maintain this trail. 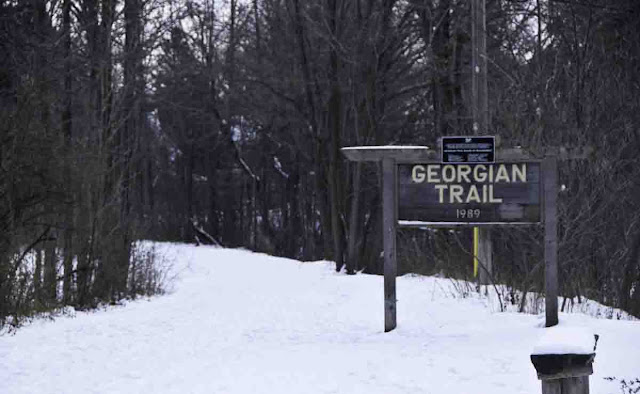 This is the start of the trail down by the harbour.

It's entirely for non-motorized use.
I think there's some winter xc-skiing. 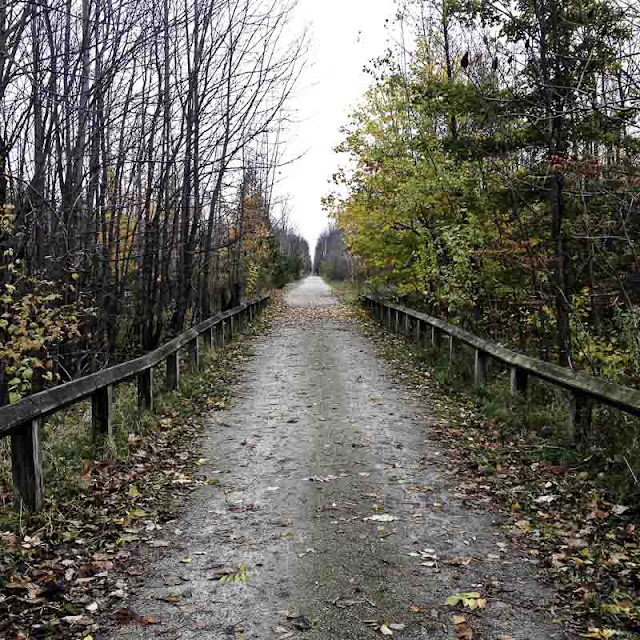 This is a stretch east of town - looks like an old railway bed, doesn't it!  I wonder how many users know the history. 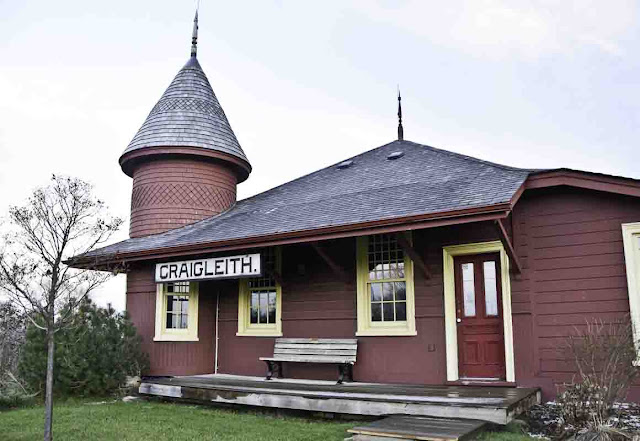 The Craigleith Station still exists, and is run as a small museum.  It's on my list to visit.  When downhill skiing became popular around Blue Mountain in the 1950's, the Craigleith station would see hordes of skiers get off the weekend ski trains bringing people from Toronto.  It's still Ontario's best skiing area, but you can't get there by train anymore!

It's winter solstice today, a date I usually notice, because tomorrow the days will start getting longer.  The weather of course lags the celestial change by quite a bit, so the midpoint of winter won't be for another month here, but withing a week I'll be noticing the slightly longer days.  The first sign of spring to come.  I even got outside for 10 minutes to get some fresh air on the shortest day of the year!