There were three big lake freighters in harbour in Owen Sound the other day, and I'm always fascinated by those big ships.  They were all floating high, probably empty of cargoes for the winter, and anxious to get moving again. 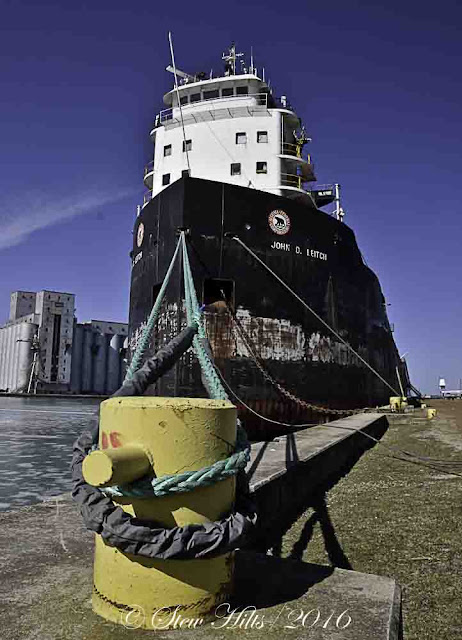 When the John D. Leitch was built, in St. Catherines, Ontario, it was the largest self-unloading bulk carrier on the lakes; now it's the oldest such ship, though it's had a major refit. 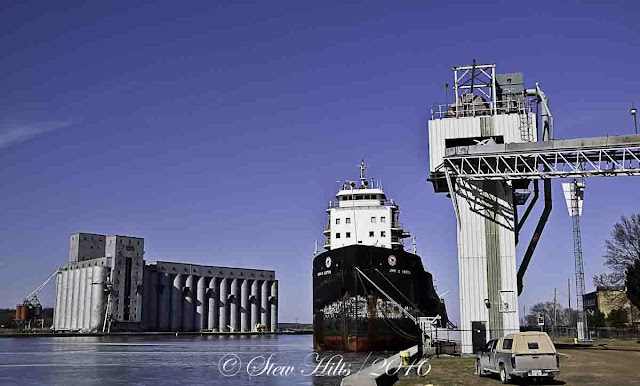 Originally it was built to carry coal for Ontario Hydro, but now that Ontario has phased out coal power generating stations, it can carry grain, iron ore, gravel and other bulk cargoes.  John Leitch owned Upper Lakes Shipping, but the business has been sold to Algoma Central, who have kept his name on this ship. 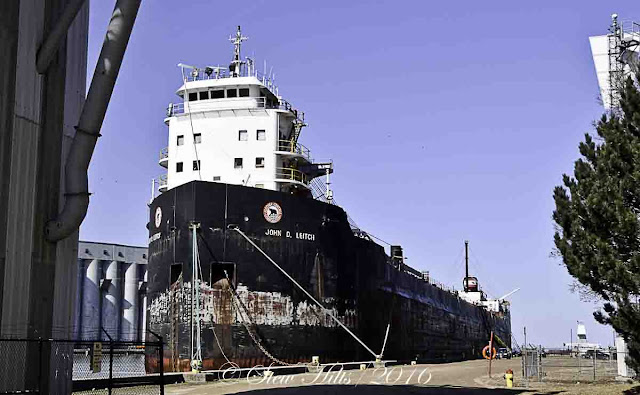 It took a little walking around to get a picture of the full ship, but the cement dock isn't busy of course, so I was able to walk under the loading tower for that and get these pictures.  This ship has been called the "little bank building on floats" because of its tall wheelhouse that looks a bit like a corporate building. 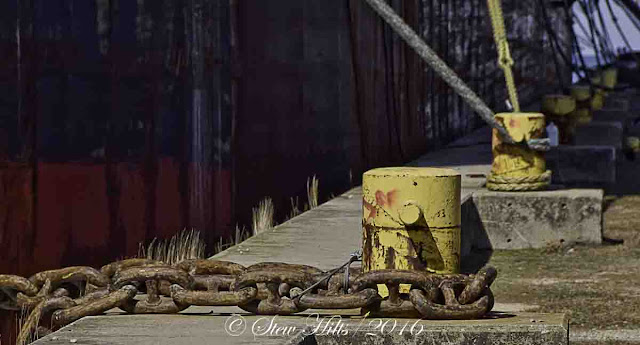 I think it must have taken a team of boathands to drag this chain up and onto the pier.  A lot of other ropes are holding it close all along the dock.

On the other side of the harbour was the Algoway, another bulk carrier.  It carries the same range of bulk cargoes, including salt from the mines underneath the harbour in Goderich. 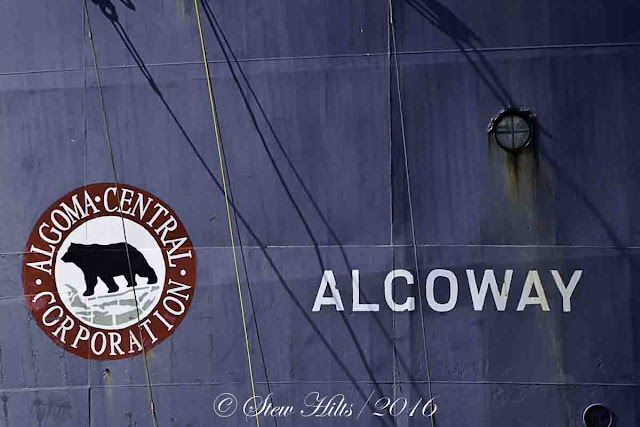 Owned by Algoma Central, this ship was built in Collingwood when there was still ship-building in the harbour there.  It's a little smaller than the John D. Leitch.

This is the huge boom for loading and unloading, 250 feet long.  It can swing out at right angles to help load or unload.  On older ships there might be several cranes unloading bulk cargo out of each hold, and corresponding cranes on shore to load each hold.  Loading with a bucket on a crane is a slow process!

On ships like this, conveyor belts do all the work.  They run along the bottom of the ship so the cargo can be dropped down onto them.  Then they rise up an elevator and drop onto the 2nd main conveyor belt that runs along this boom, extending onshore.  It can drop piles of coal on a dock, or drop grain into a receiving bin for an elevator.  All the magic is actually out of sight, and it makes shipping much safer than it has been in the past.  Dust control is also much better if the conveyor belts are enclosed in a tunnel.  You can find a neat video that illustrates all this here. 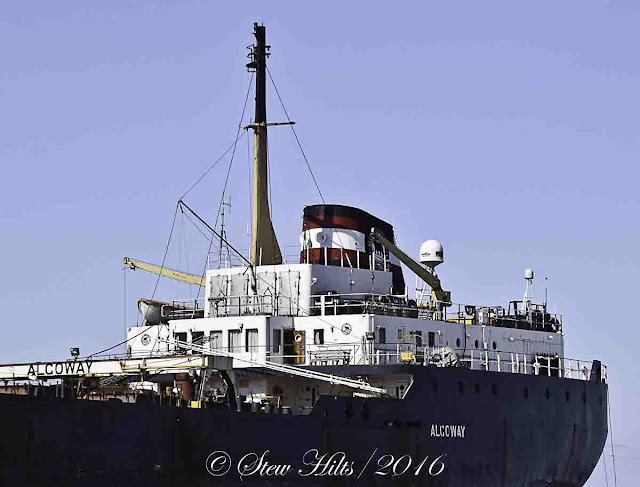 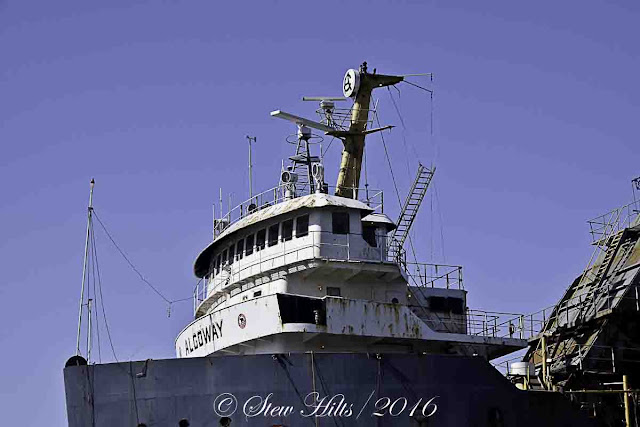 But the wheelhouse definitely looked like it could use a fresh coat of paint! 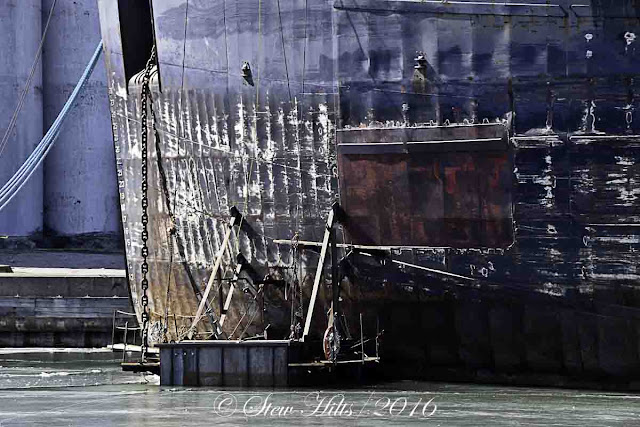 And the hull looked like it had either run through a lot of ice, or they were preparing to repaint it. 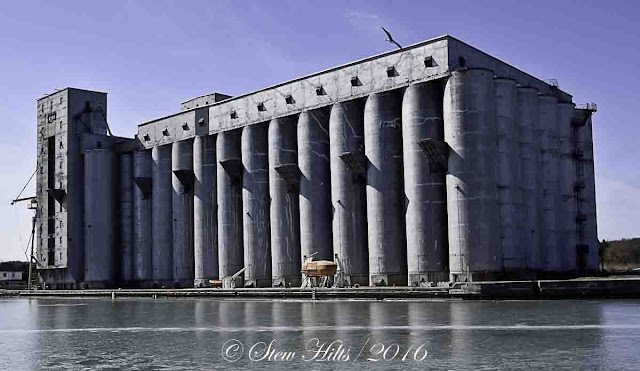 Looming over all of this were the Owen Sound grain elevators, though none of these ships are necessarily carrying grain. 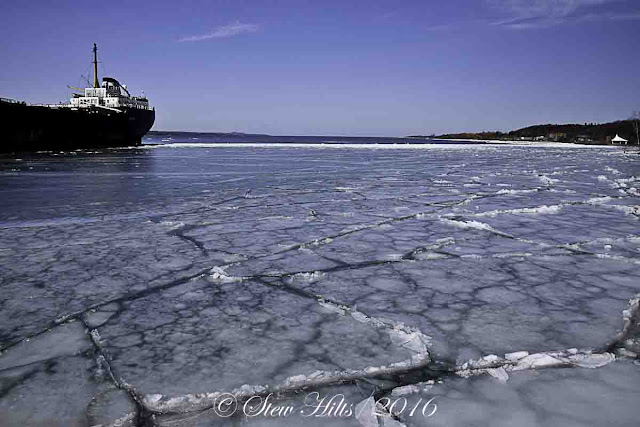 And stretching to the north, behind the Algoway, is the blue water of Georgian Bay.