The Continuing Mystery of Wodehouse Creek

There are two continuing mysteries about Wodehouse Creek that intrigue me, though I don't expect I'll ever really be able to understand them any better than I do now.  I am sure though that I will continue to explore this fascinating area for many years to come. 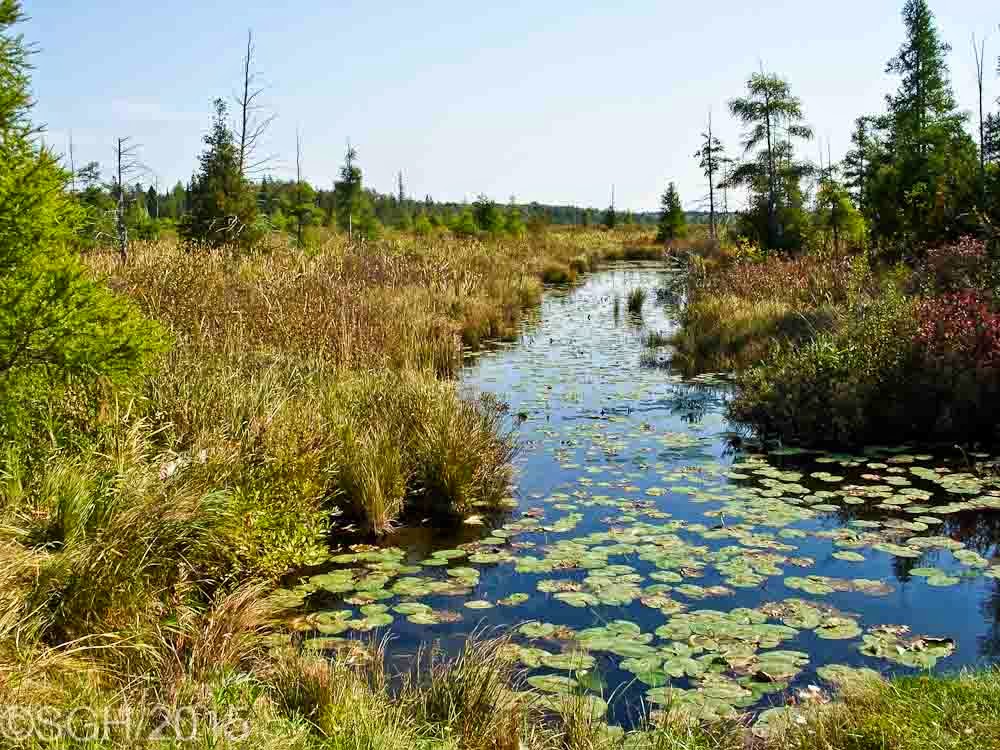 The first mystery is that the creek seems to get smaller as it goes downstream.  This view is just below the springs, as you head down into the open Wodehouse Marsh.  The stream is about 15' wide, and perhaps a foot deep, even in late summer. 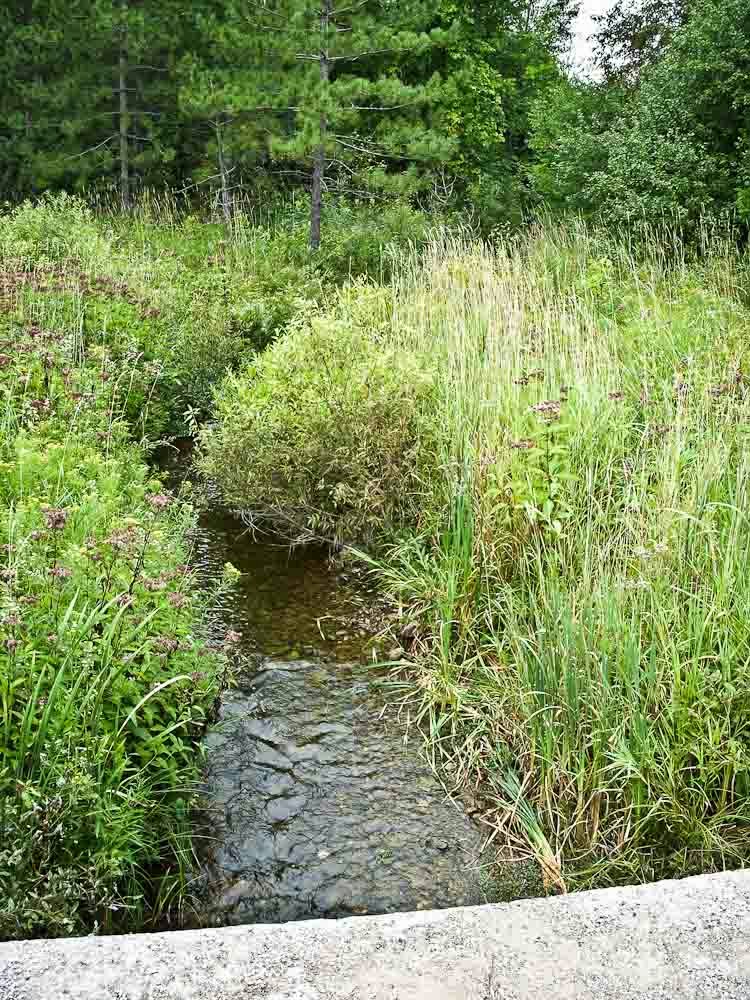 But three roads downstream, it has shrunk to a small creek about 4' wide and a few inches deep. 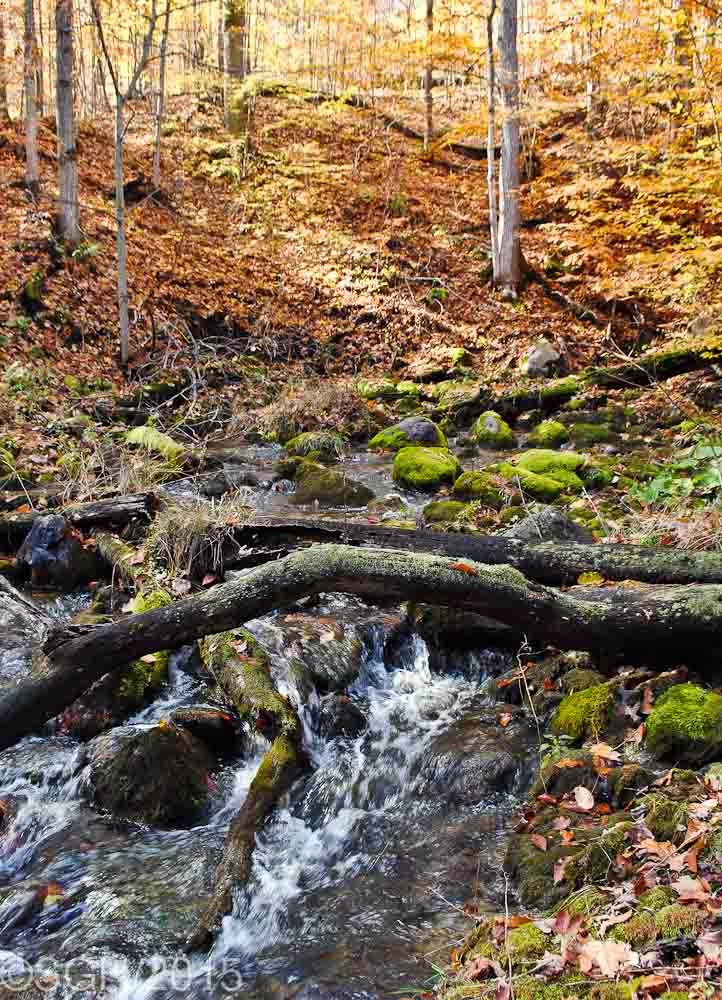 The other mystery has to do with the springs.  This is one of the main springs, in the fall, where the water just gurgles up out of the ground among those mossy boulders. 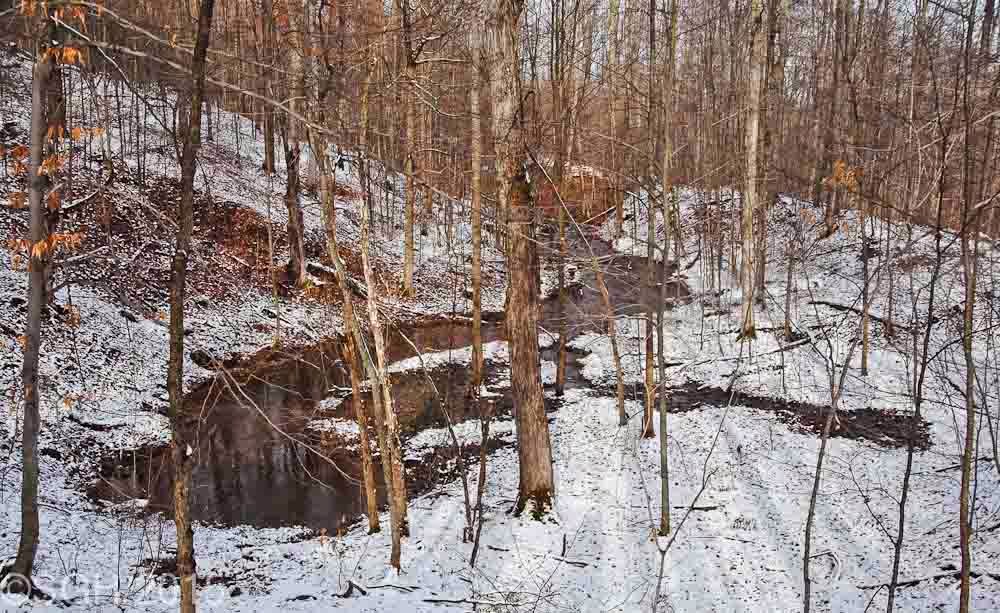 A short distance off to the left are other spots where water bubbles up out of the ground.  It's easier to see exactly where after an early December snowfall. 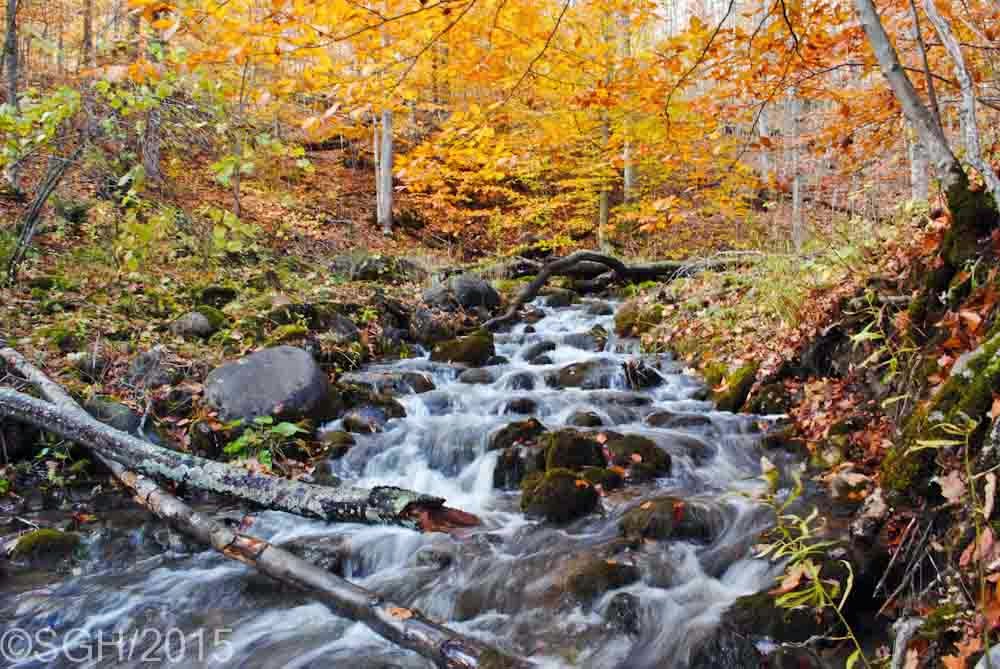 These coalesce to form a beautiful stream tumbling rapidly downhill over the boulders.  The Bruce Trail now passes right beside this cascade. 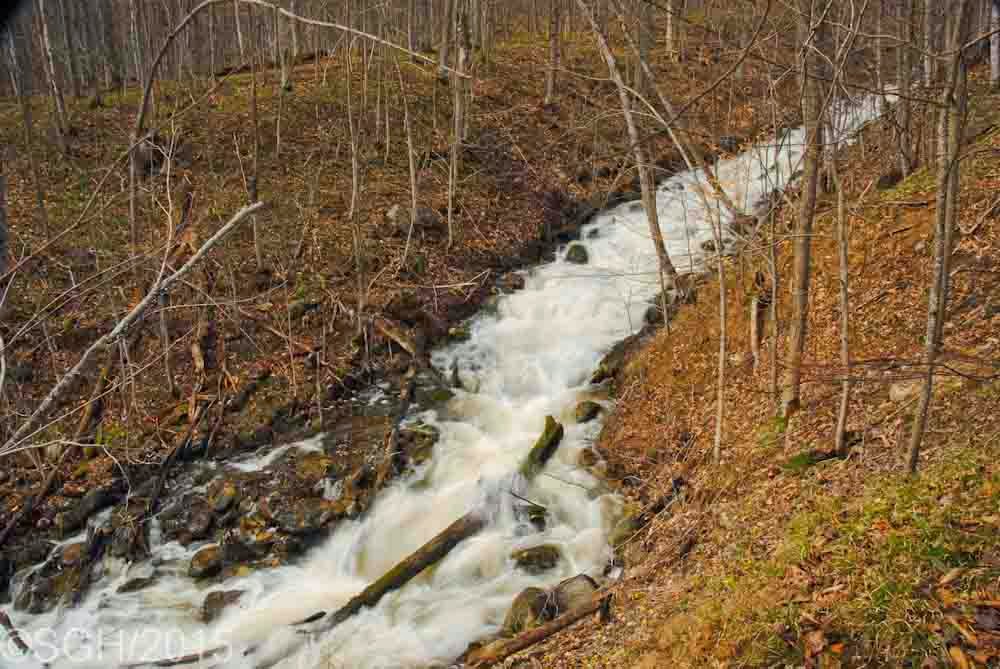 And at this time of year, here over one of the steeper stretches, it's a foaming white torrent of water. 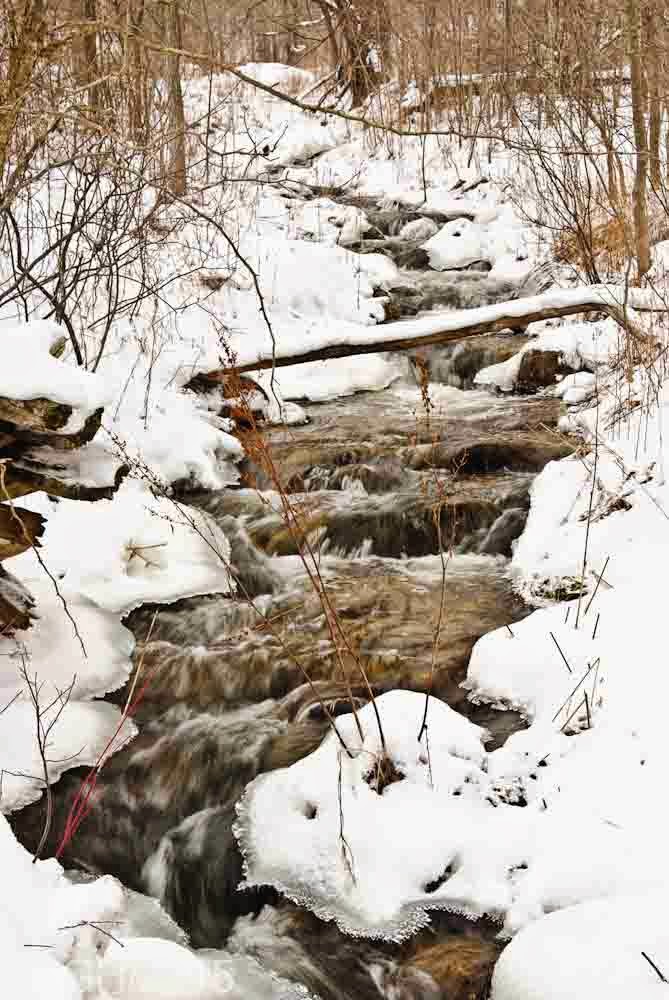 But there are other springs, none as large as that one, but five altogether, strung out along the Niagara Escarpment over 3 or 4 miles, all apparently emerging somehow from the Wodehouse watershed.  This is one of those other small streams much lower down the slopes. 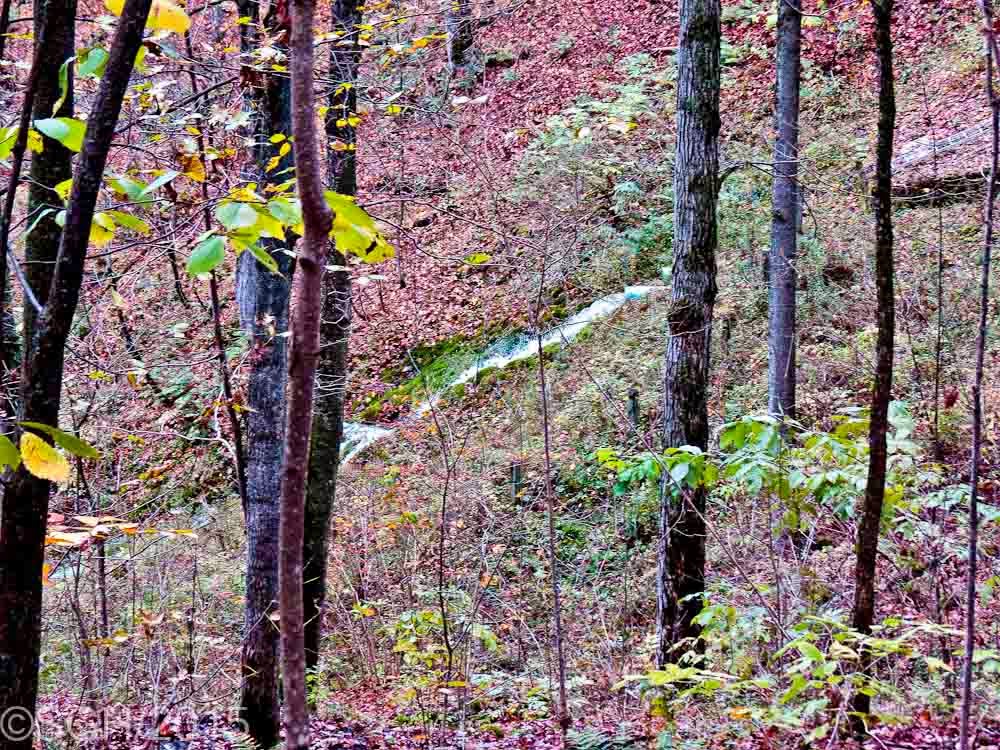 And this is another spring at Talisman Mountain Springs Inn, as it is now known.  This one has been tapped to provide the water supply for the village of Kimberley and a nearby subdivision, so only the overflow plunges out of those two green pipes in the hillside.

The stream gets smaller as it goes downstream, and there are several additional springs along the slope.  I think the mystery might be solved if there are other sinkholes along the channel that we don't know about, taking away some of the water, which in turn feeds these other springs. 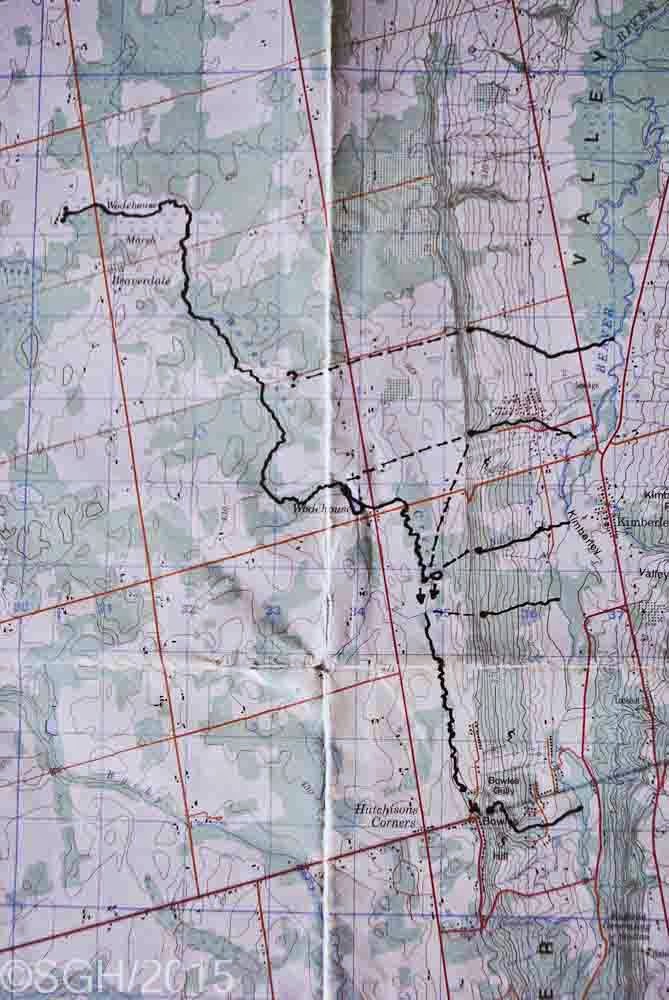 This crude map is my attempt to show all this, the creek emerging from the springs in the upper left, flowing east then south, east then south, to the main sinkholes, the perched pond right beside them.  The wiggly stretch of the creek is where we paddled in.  Two arrows show where the overflow during the flood sends water down into the normally much smaller Lower Wodehouse Creek, and over the ephemeral waterfall at Bowles Gully.

If you count the dark streams flowing east that I've highlighted, you'll see that there are five springs altogether.  I've sketched some dashed lines to show my 'theoretical' idea that there are additional sinkholes someplace upstream feeding these springs. 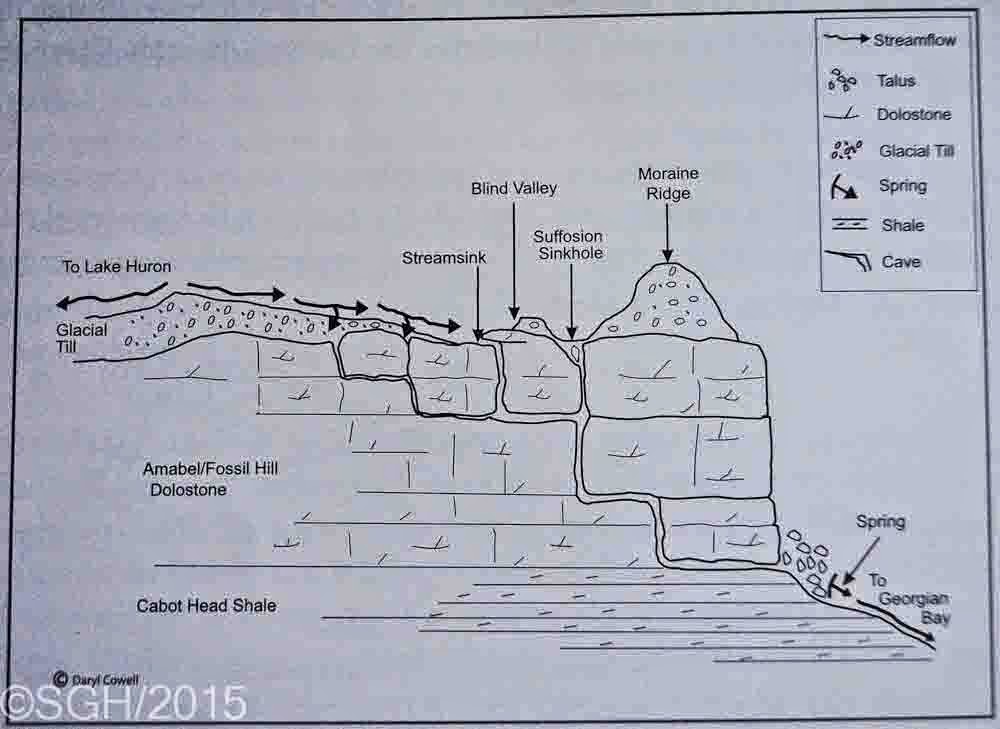 And for anyone interested in the technical details, this diagram is from the excellent book on the 'Geology and Landforms of Grey and Bruce Counties'.  There is actually a ridge all  along the top of the Niagara Escarpment in this area, the Banks Moraine.  It blocks the creek from flowing east and down into the valley.  Behind it the water has gradually eroded down into the glacial material to expose the dolostone cracks, so the water now drains down into those sinkholes.  But the next layer down is shale, which water will not penetrate, so it is forced to flow sideways where it comes out as springs. 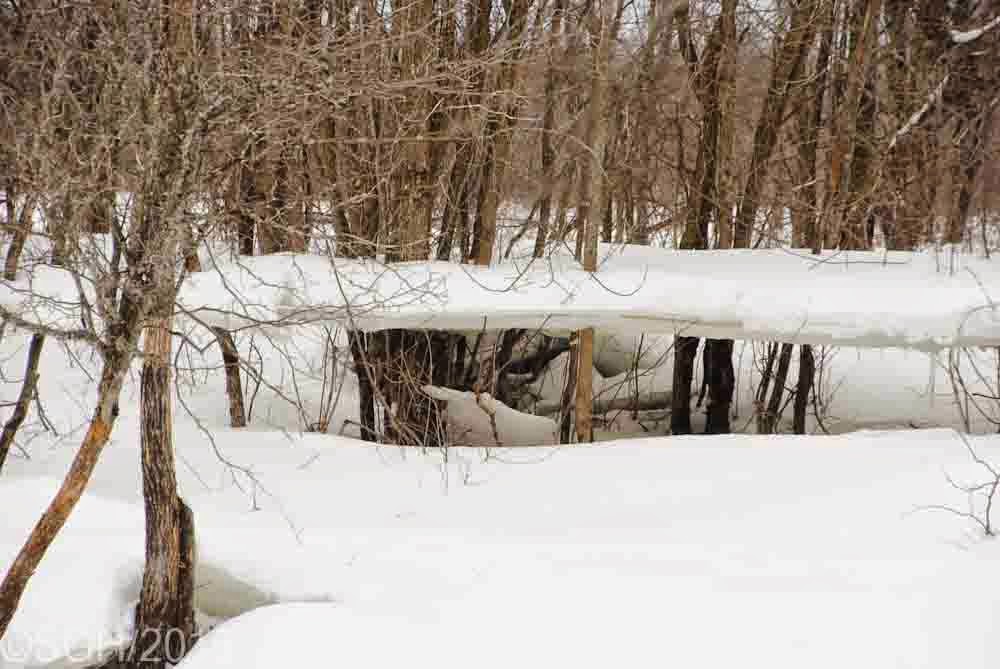 Here's one last photo, which was a mystery for me when I took it several winters ago - a slab of ice frozen to several small trees, high above the sinkholes beside the perched pond.  This helped me realize how high the water level gets in the spring; this was the level we paddled at.  This ice resulted from a January thaw which filled the temporary lake which then froze, and the water drained away under all the ice, just leaving still frozen slabs around the edge.

I've really enjoyed putting this series on the karst together, especially because it has forced me to try and express it all clearly, and to find all my relevant photos.  Sorry if it got long and technical in parts, but I'm really pleased with the results!