Sinkholes and the Perched Pond

Some of you have probably been wondering exactly what these 'sinkholes' that I'm talking about really are.  They're not those large sinkholes that you sometimes see pictures of where a car or two have collapsed into a large cavity that opens up under the street.  They are simply cracks in between the rocks where water runs downward into the limestone beneath. 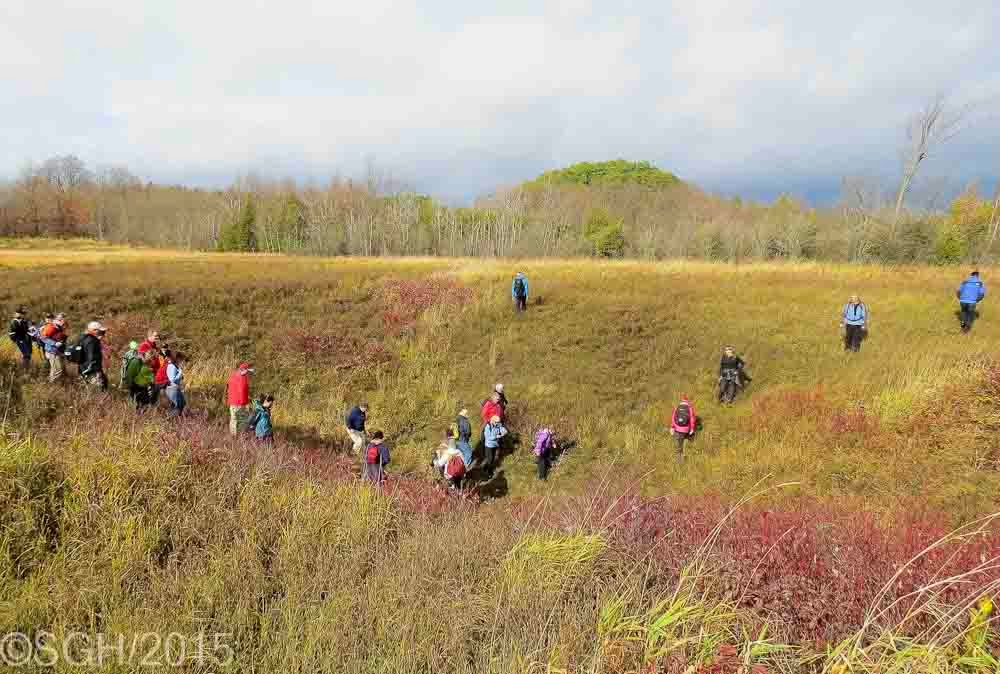 Here's a group on a Bruce Trail hike in the fall two years ago, heading down into the depression surrounding a sinkhole, and back out again.  At the moment, this would be under that flooded field. 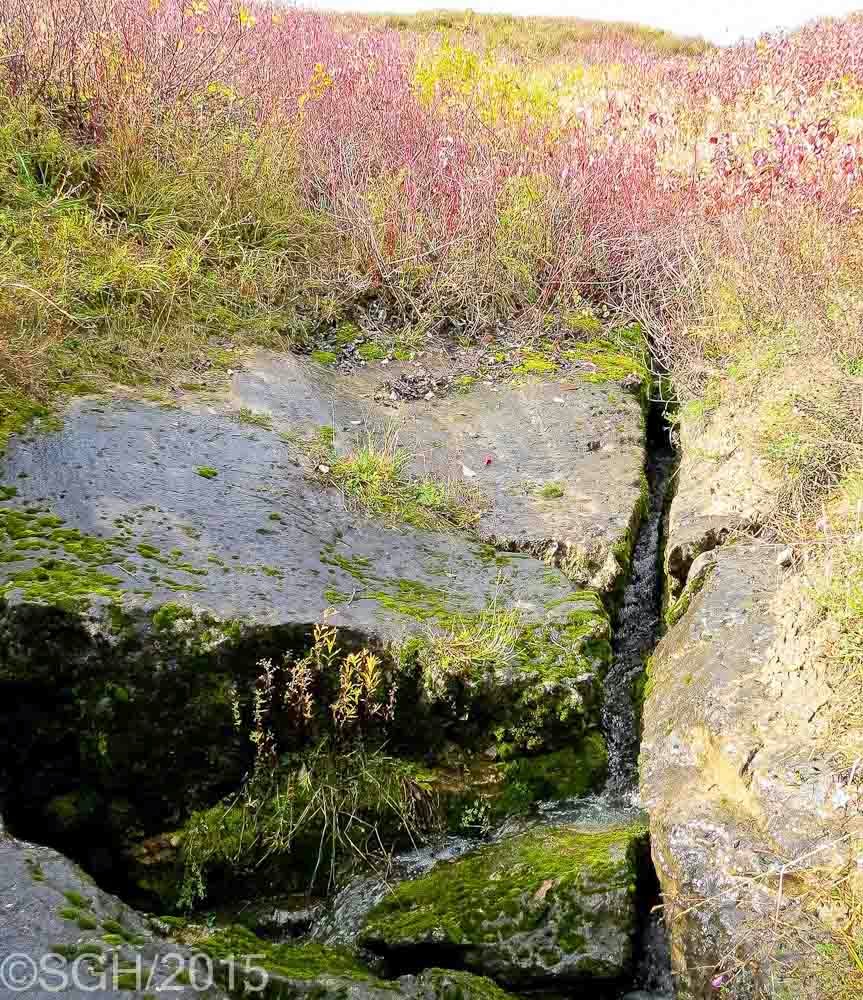 And this is what they're looking at, just a tiny stream of water, about 4" wide and 2" deep, dropping down the crack between two large pieces of bedrock. 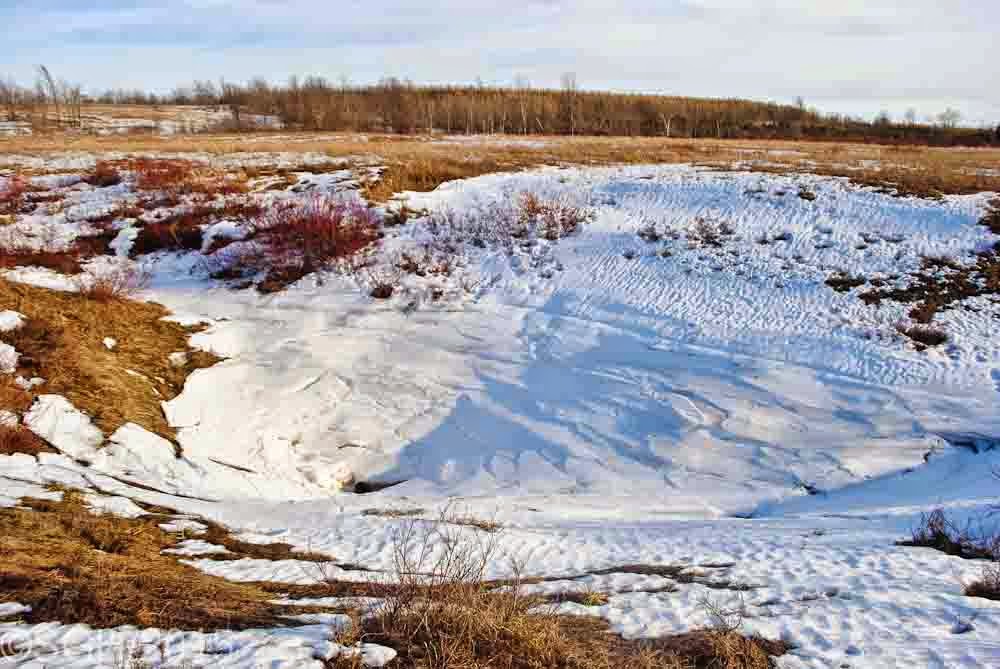 This is what the same sinkhole looks like in the early spring before it's flooded.  The hole at the bottom is the only evidence of water draining away.  We paddled across this last week. 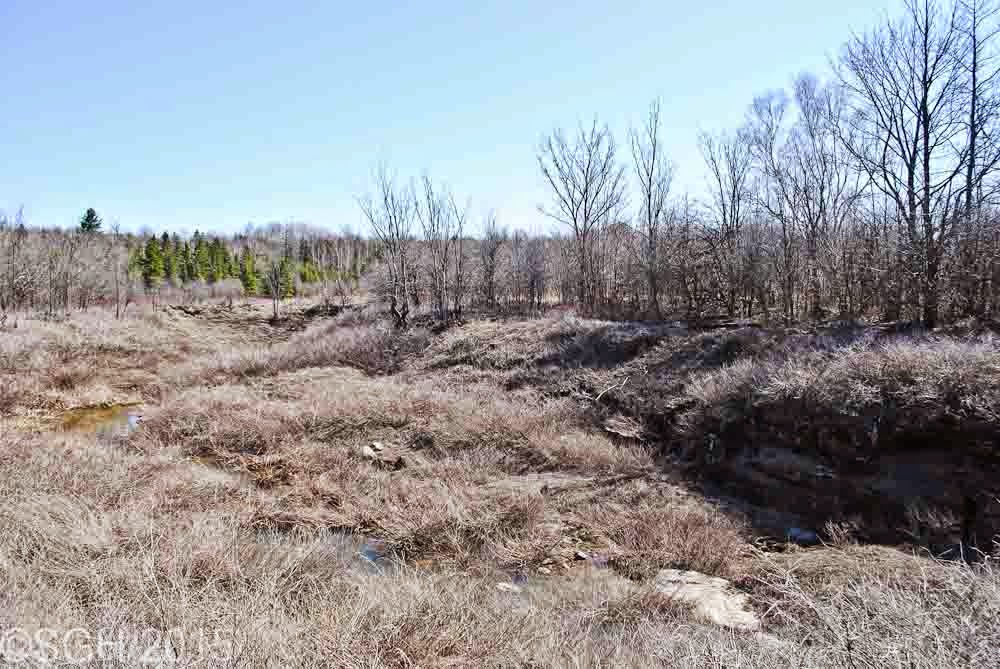 This is the main cluster of sinkholes taken two years ago, just after the spring flood had ceased and water levels were back down to normal.  That year the spring flood was very brief!  Two sinkholes are in the lower right, against the shadowed rock outcrop, and one is in the upper left. 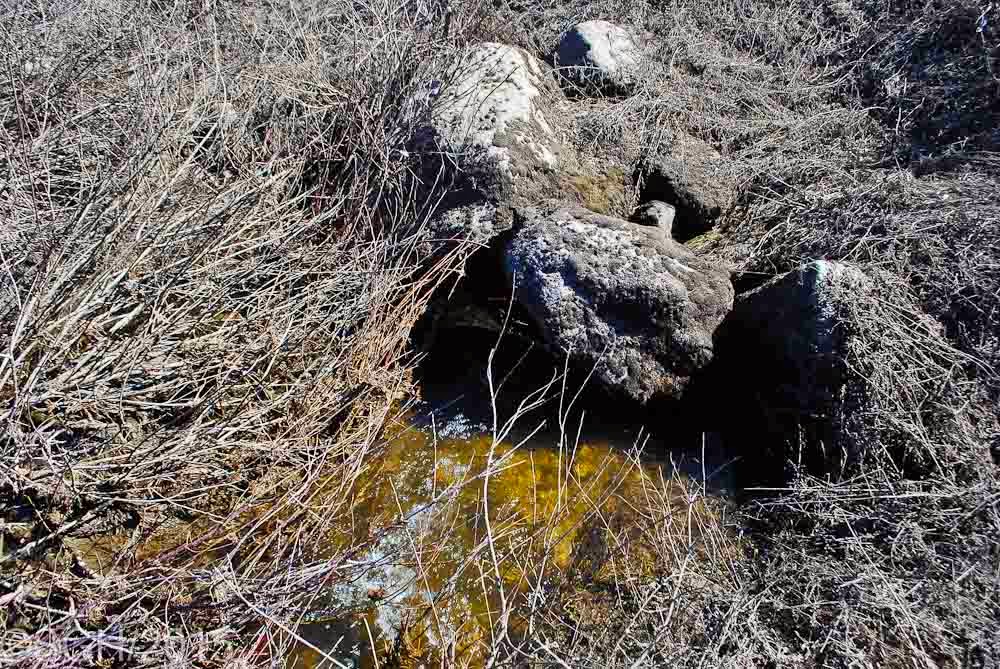 The sinkhole is simply a stream of water disappearing downwards between the rocks.  In my mind, none of these are big enough to have 'caves' below them, but the literature does refer to such caves, and I've heard local stories of people crawling through them - but you certainly couldn't tempt me to even try!! 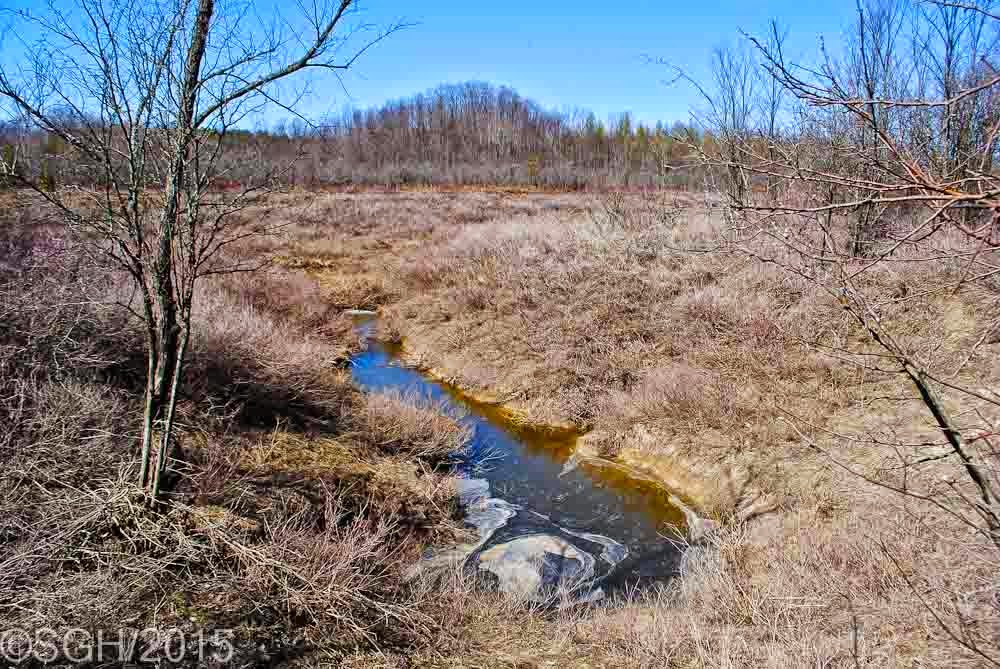 This is the last and lowest sinkhole of the main cluster, almost always with at least a small pool of water in it, and a bit of a whirlpool pattern in the water. 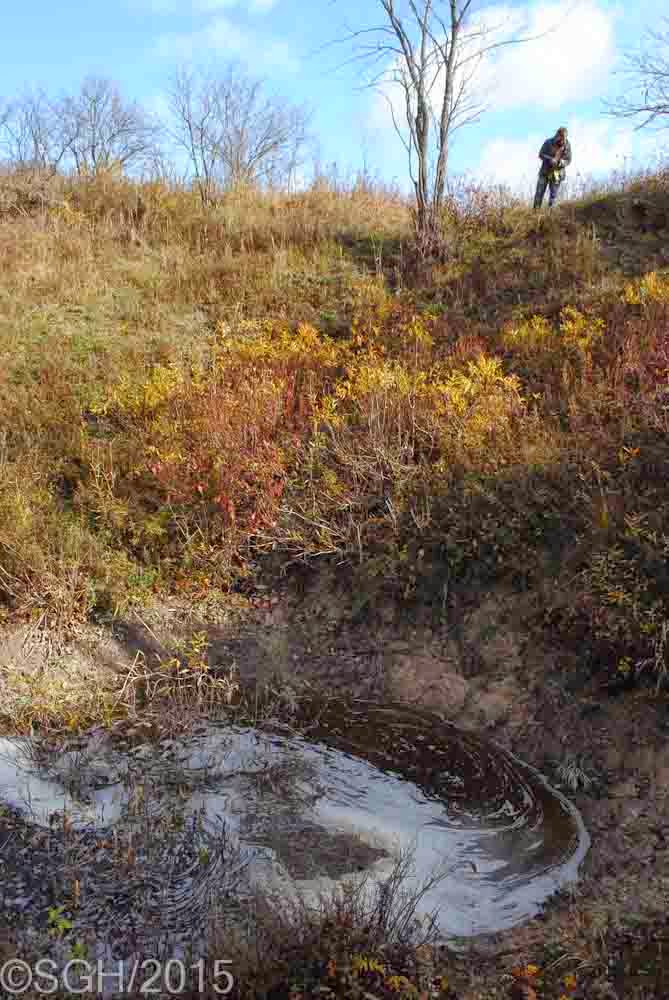 If you stand at that sinkhole, and look upwards, you can see where the 'perched pond' is, about 18' higher. 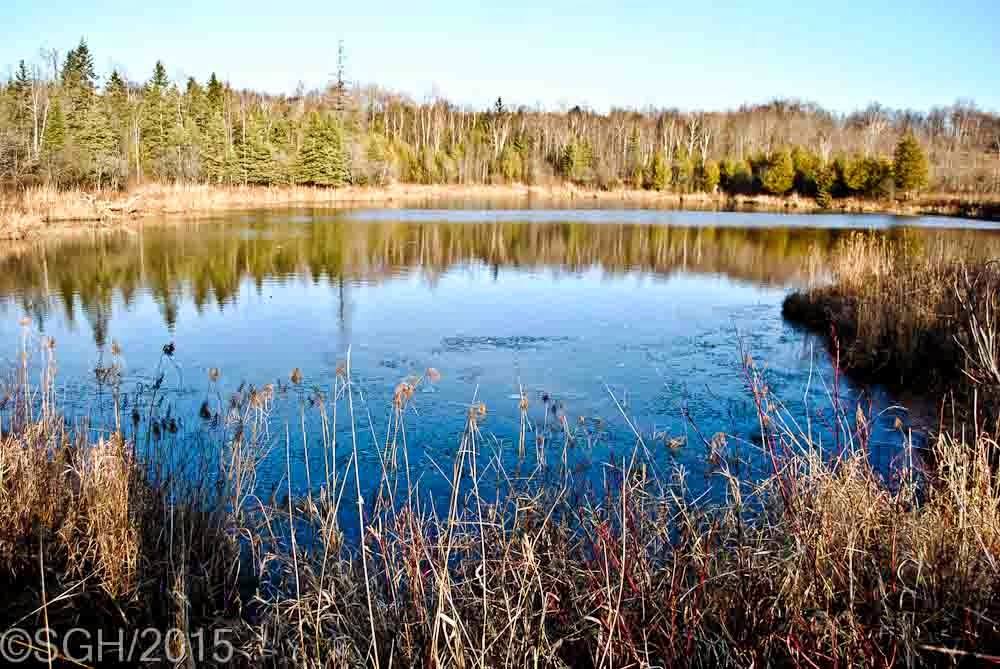 And if you stand where that fellow is in the shot above, looking beyond, this is the perched pond.  It's known as a 'perched pond', because it's perched right beside a flowing stream, but it's higher and hydrologically seperate in the landscape. 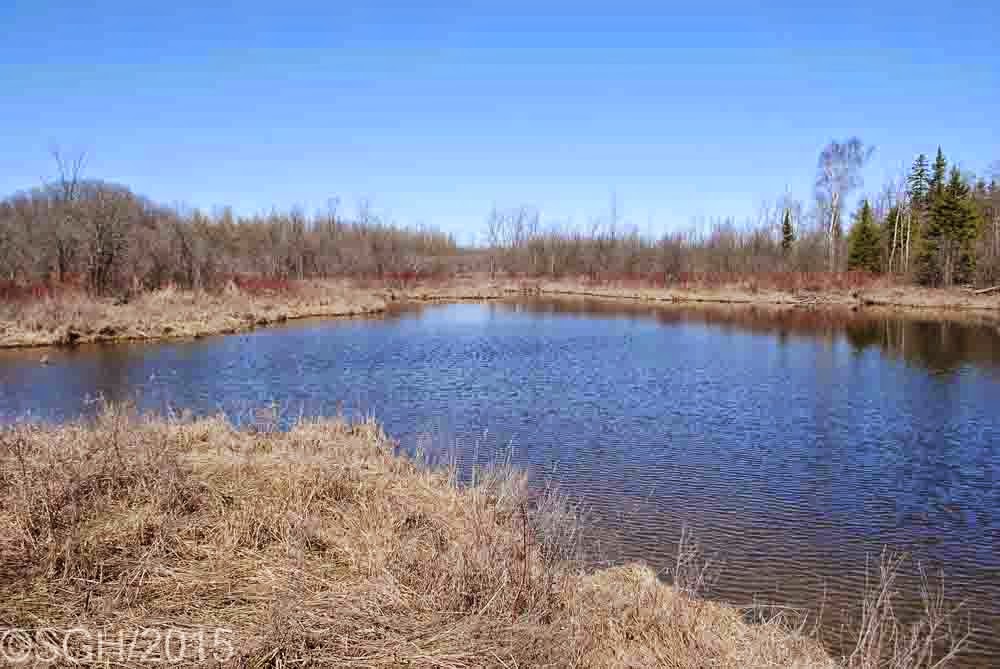 Even the government topographic maps get this one wrong, showing the stream flowing into this pond, which it doesn't.  I think a number of people interpret the pond as the sinkhole, incorrectly. 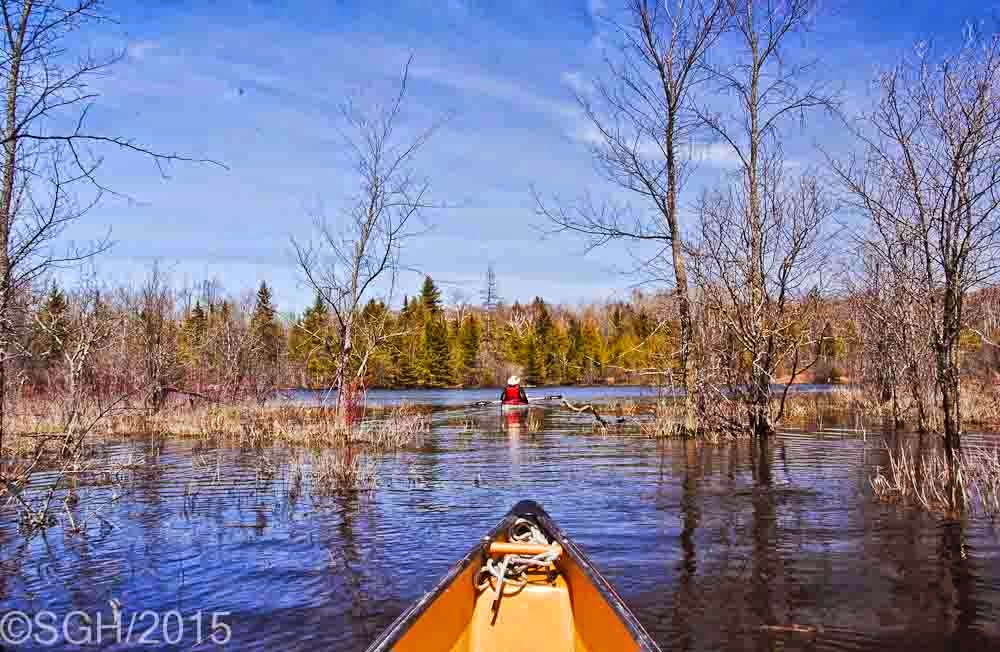 I always wondered how the pond possibly got its water, which seems stable all summer long.  I began to guess that maybe the spring flood reached high enough to refill it each year, which seemed amazing to me when I first thought of it.  It wasn't until we first paddled in there last year, here paddling from the flooded field back into the perched pond, that I realized it was true.  Another fascinating side to this interesting drainage system.