I've enjoyed your comments on my maple syrup stories. Having made maple syrup ourselves on a VERY small scale many years ago (but quite successfully), it's nice to see all the different style operations.  There was one more, a very large commercial operation, the largest I've ever seen, with over 6000 trees tapped! 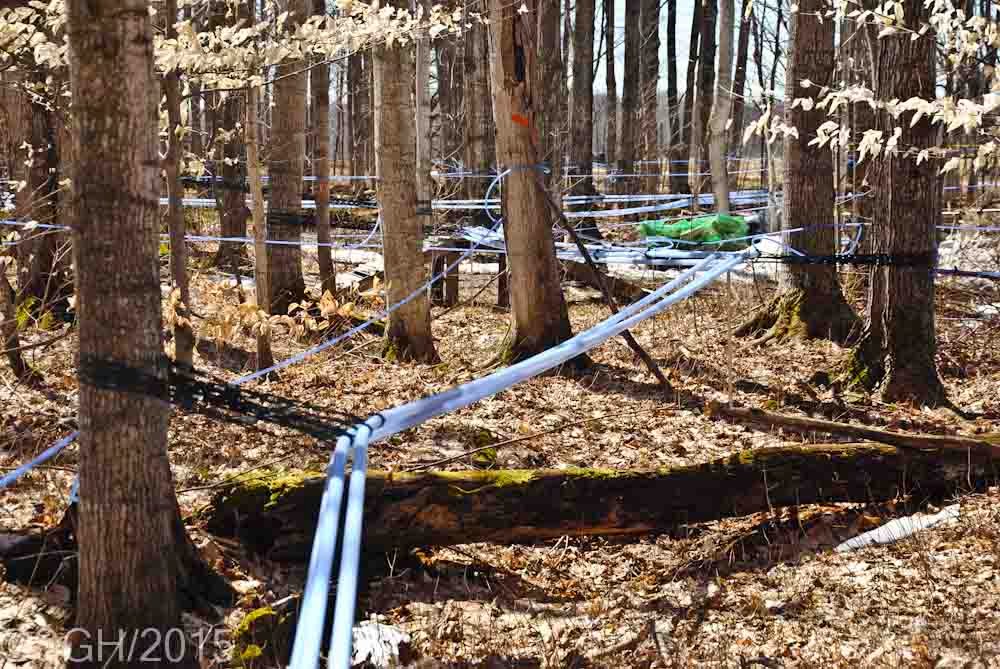 At this scale, it was based of course on the tubes collecting sap from trees - from over 100 acres of Sugar Maple forest! 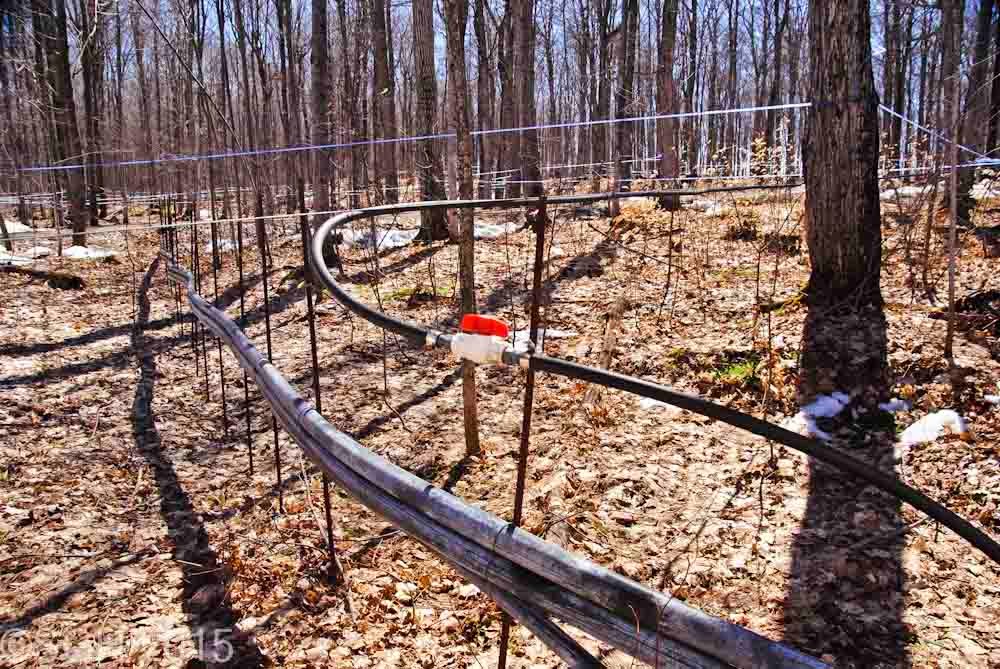 The tubes all came together into larger tubing, some of which ran under the farm lane, and toward the sugar shack. 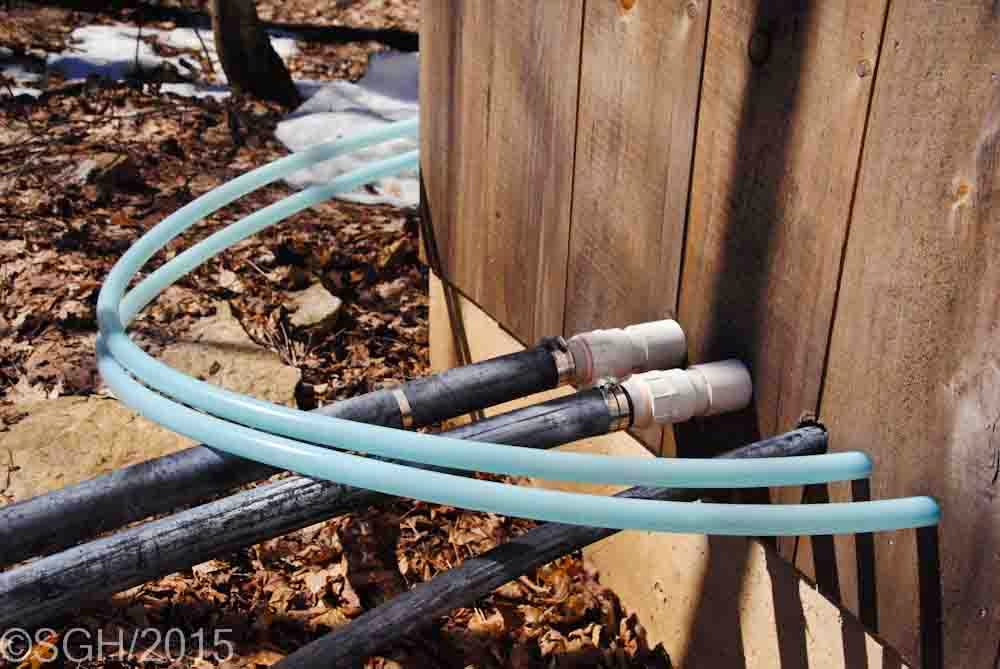 All the sap is collected here in these five pipes, into a small pump house. 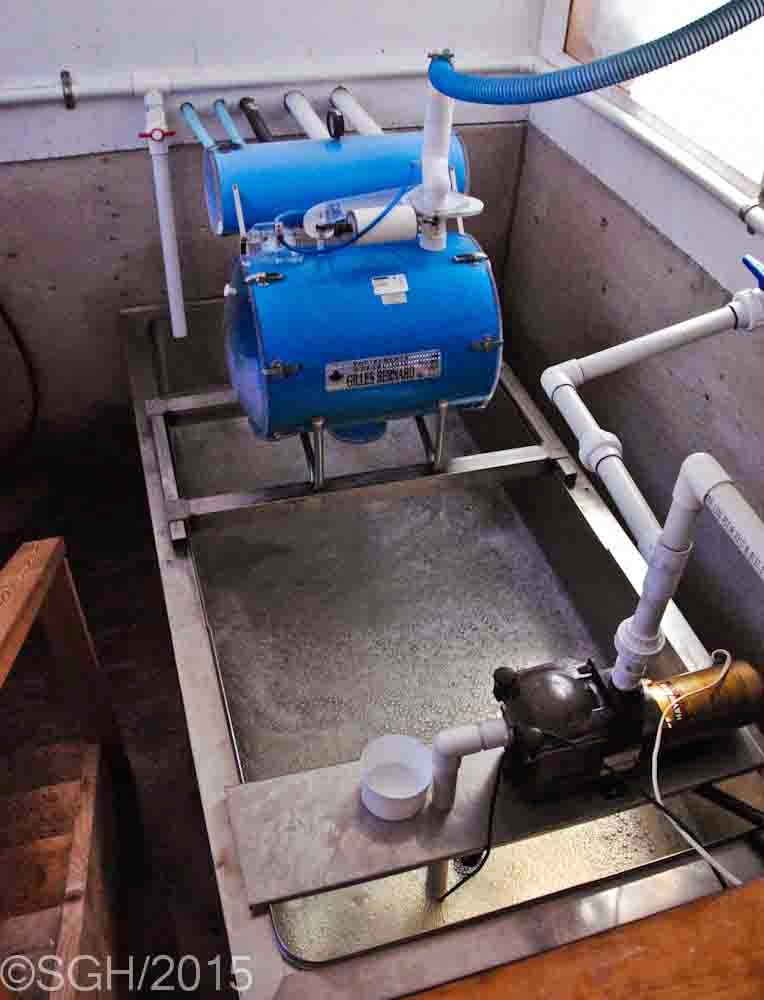 This is the pump house, sunk in the ground.  It pulls the sap from the tubing, and then pumps it into large vats in the sugar shack until enough accumulates to turn on the evaporator. 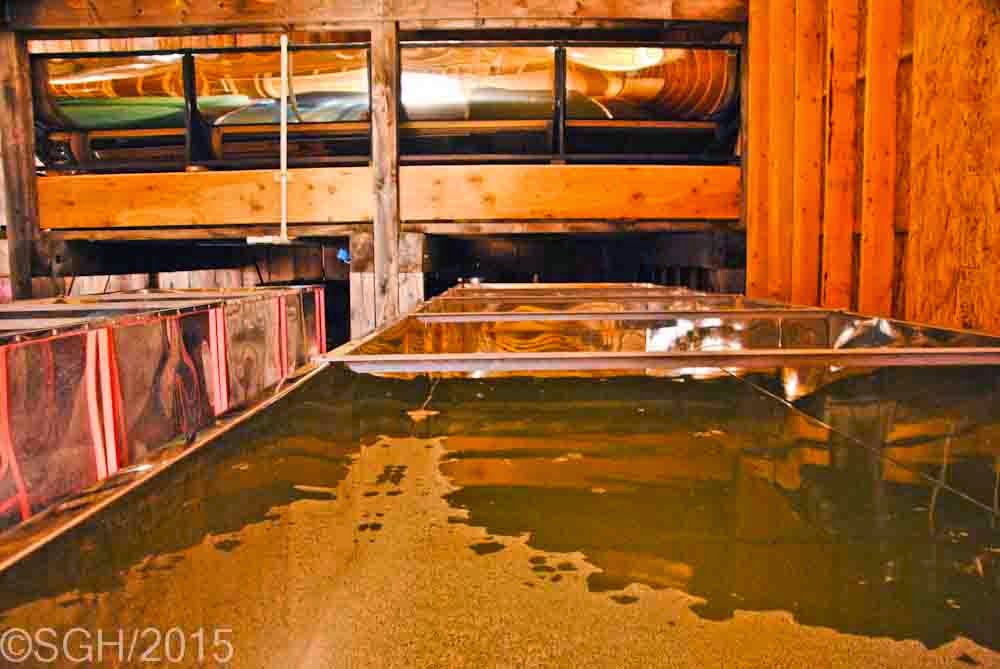 This is one of two huge vats holding fresh sap, just from today's run, ready for processing. 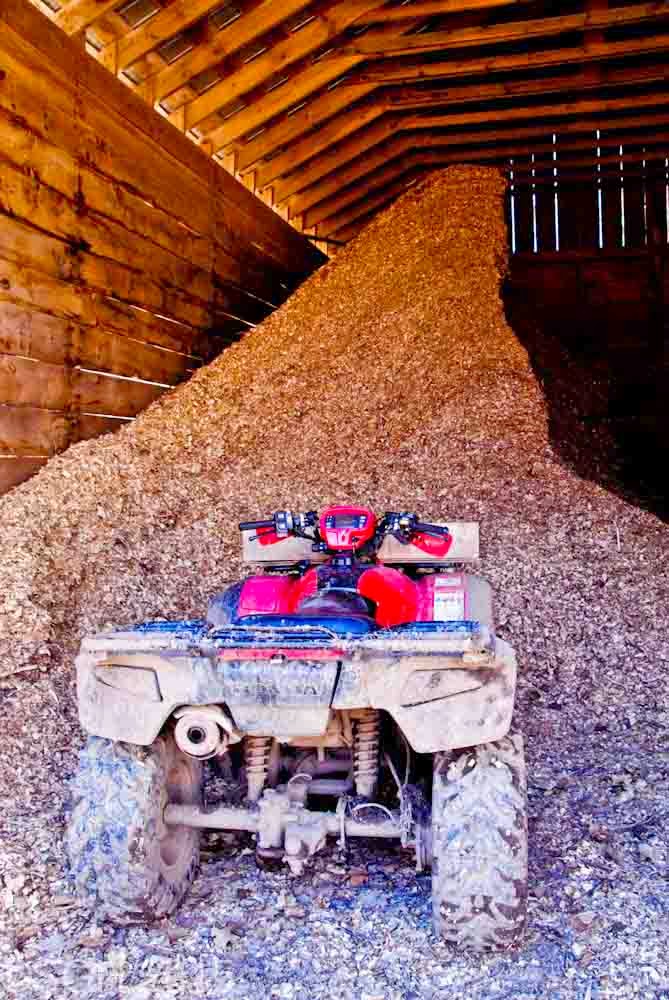 How do two people handle this scale of operation?  They look for ways to save time.  And this is it - their firewood supply, all chipped!  They harvest smaller trees, as you would normally thin a woodlot, and chip the entire tree.  This makes for a very efficient use of the wood, and saves an enormous amount of firewood cutting and splitting and stacking and handling time! 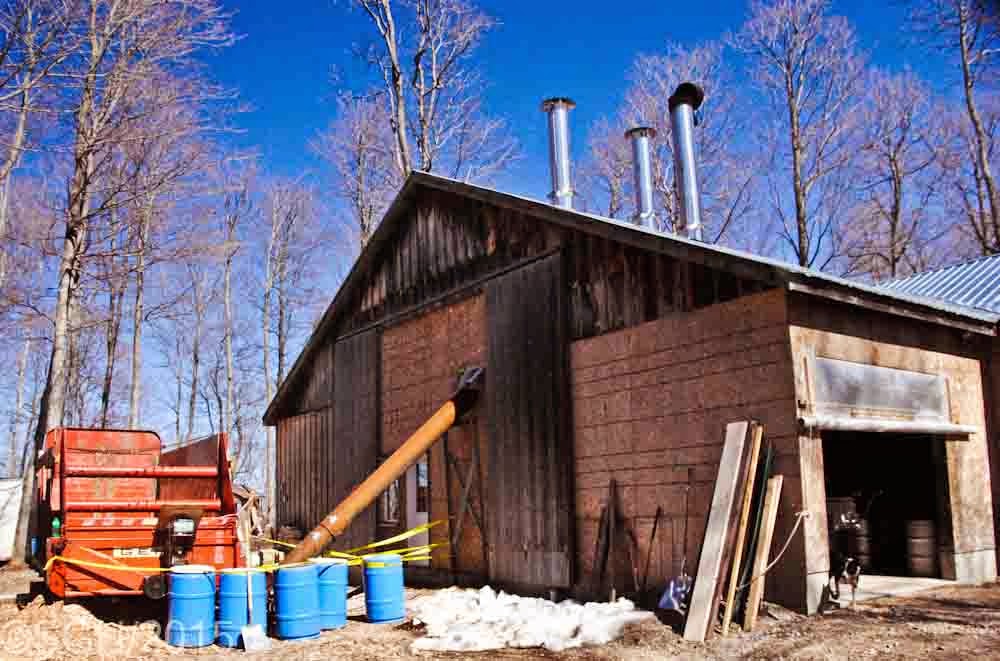 The chips are loaded in the red bin on the left with a front end loader, and run into the burner through the slanted pipe. 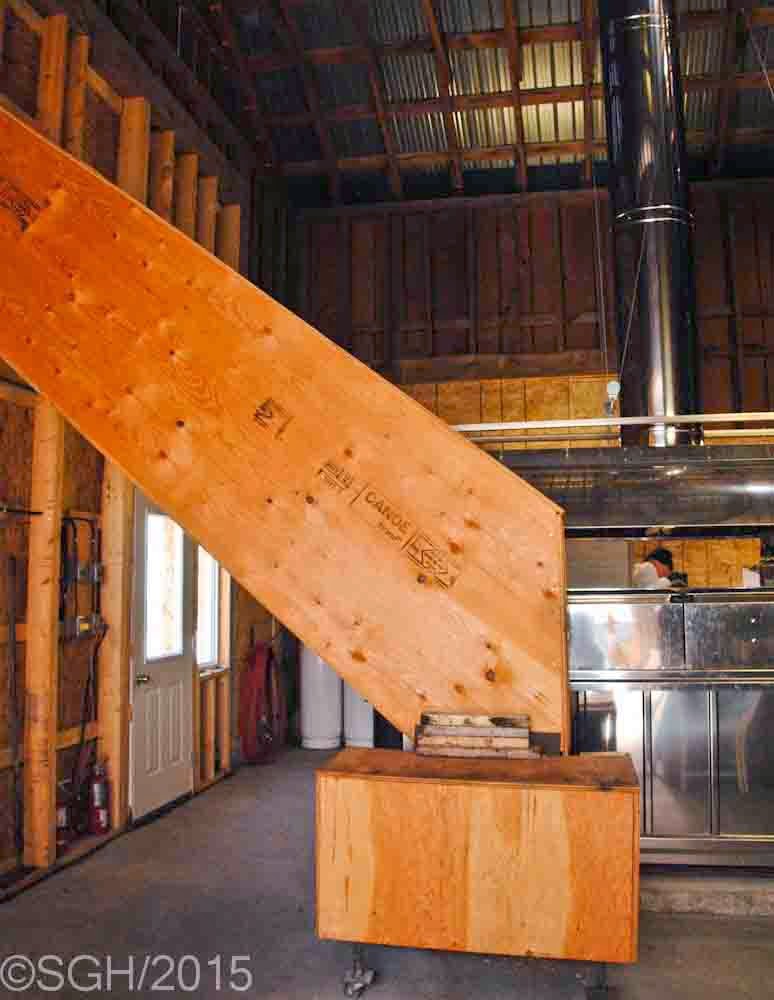 Inside they drop down this enclosed conveyor belt to an auger, which automatically loads them into the burner.  You never have to open the boiler door to toss in the firewood, again making it much more efficient. 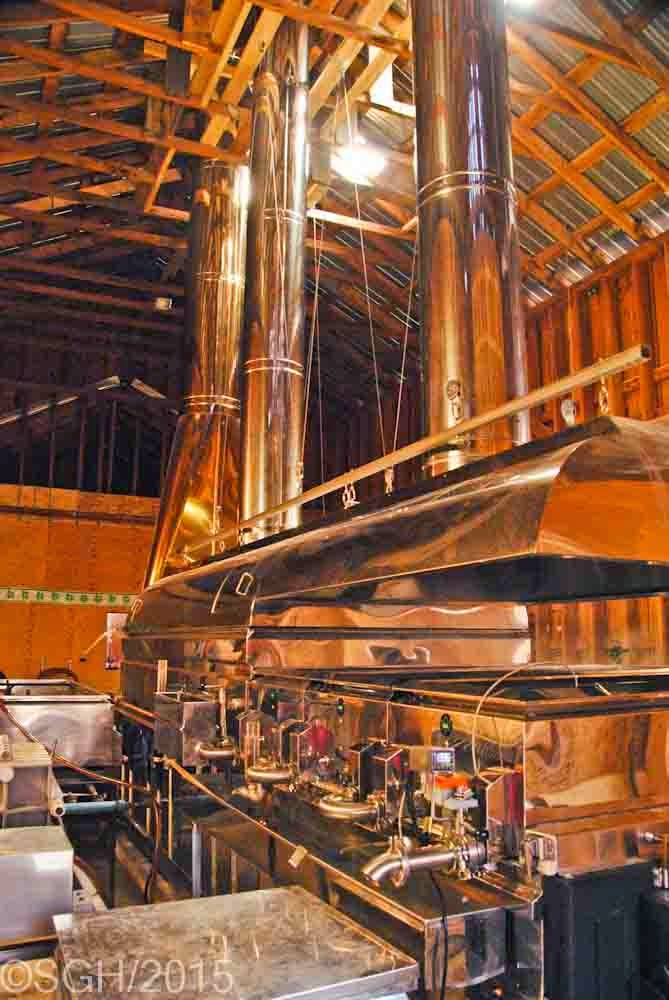 And it ends up feeding this enormous evaporator, the largest I've ever seen.  Here the entire evaporator has an overhead hood to capture the steam, so there is no steam inside the building, and no raised roof.   The farm couple markets almost their entire production through local farm markets, attending several nearby year-round.  This operation provides a full-time income for this farm couple, so their entire farm is Sugar Maple forest.   I was impressed at the system he had worked out. 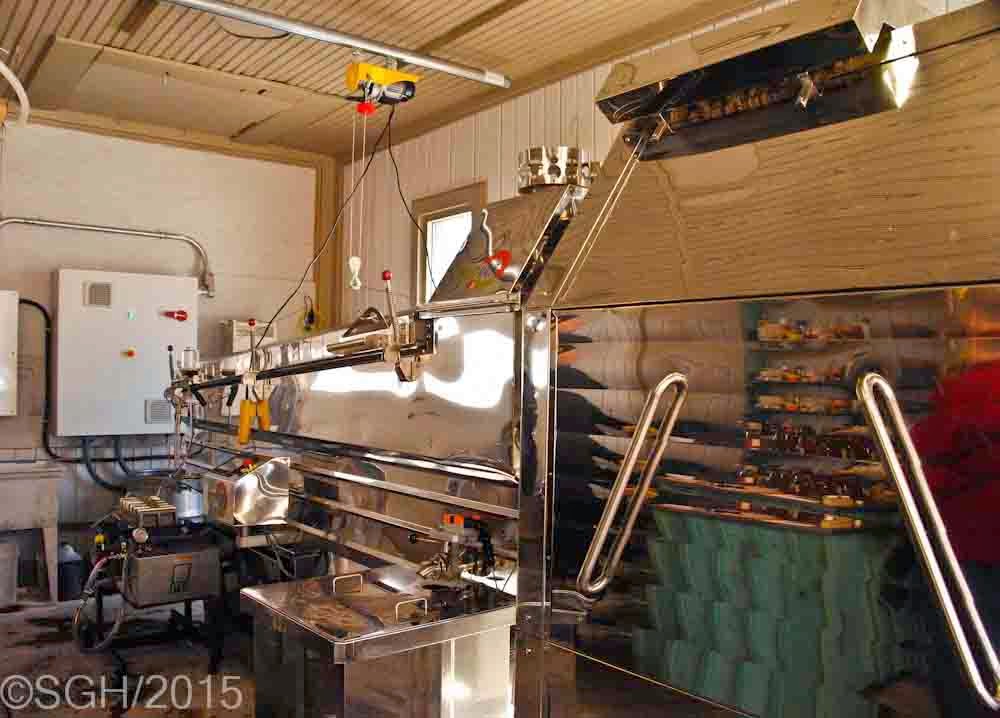 And one more evaporator, not as large as that one, but this is the first electrically heated evaporator in all of Ontario.  Costly, but enormously more efficient at evaporating and producing syrup.  According to the operator, it also provides much more consistent quality.  It's expensive to purchase, but very cheap to run per gallon.  But I'd miss the weeks in the bush cutting firewood, and the steam in the sugar shack I think.

With this week's rise in temperature (it's finally not going below freezing at night anymore), the maple syrup season is over.  I think we'll be making this tour an annual event for us.
Posted by The Furry Gnome at 7:16 PM