It was a beautiful sunny spring day, if a little cool, and we headed for the Kemble Maple Syrup Tour, a fundraiser for Kemble United Church, up northwest of Owen Sound.  I took enough photos for a week's worth of posts, and we visited 7 different maple syrup operations after a delicious maple-flavoured meal at the church.  But let's start at the end of the story - the maple syrup! 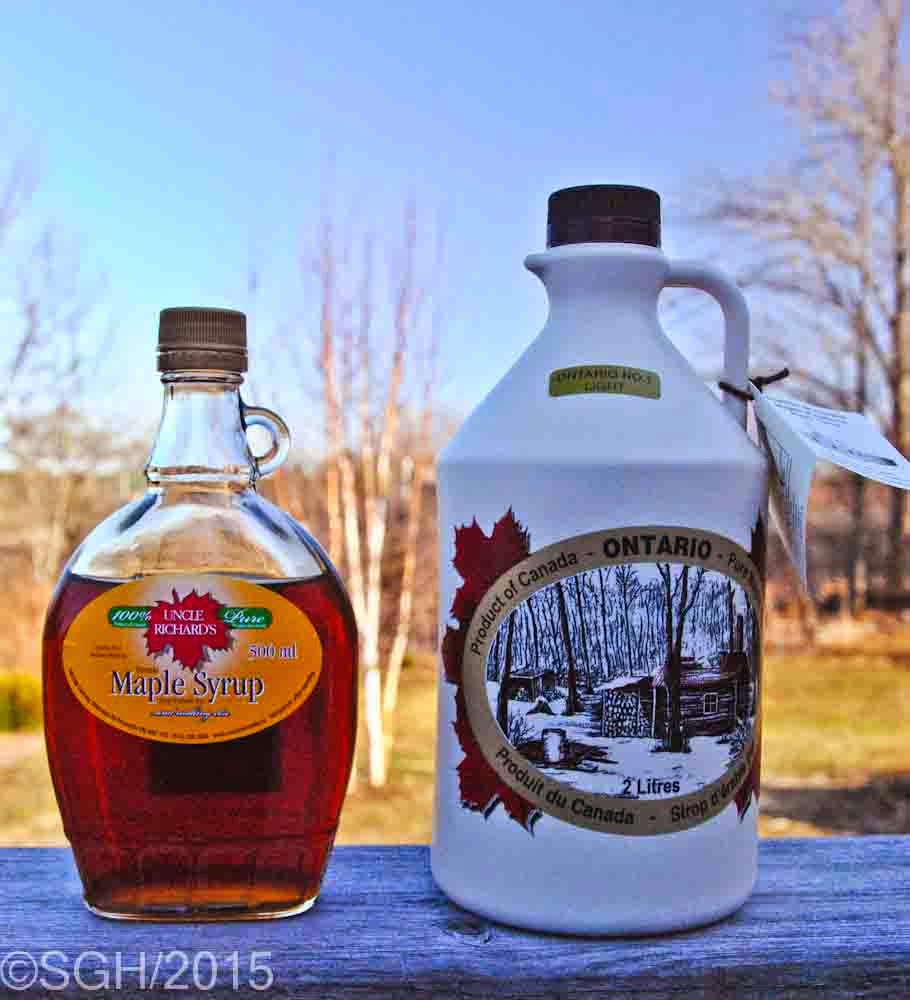 We bought the 2 litre jug of maple syrup from Kemble Mountain Maple Products.  We like it so much that we buy it in larger quantities and just keep a smaller jar (left) in the fridge.  It's a little cheaper that way, so you can use more of it! 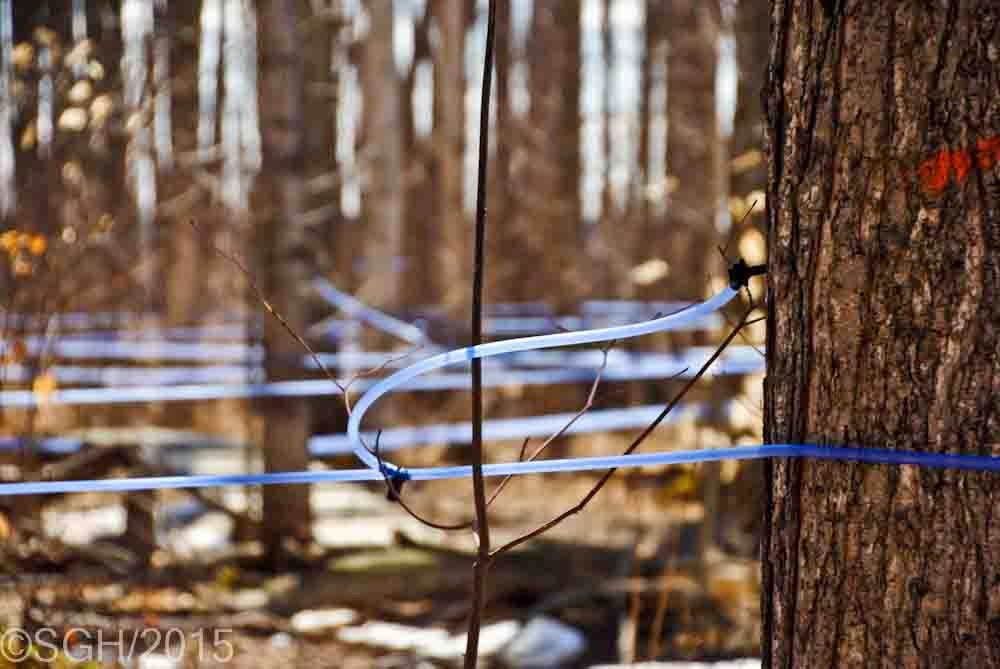 To follow its life story, you start in the sugar bush.  Nowadays most producers use tubes to gather the syrup, so the view through the bush looks really strange!  Smaller tubes go to each individual tree. 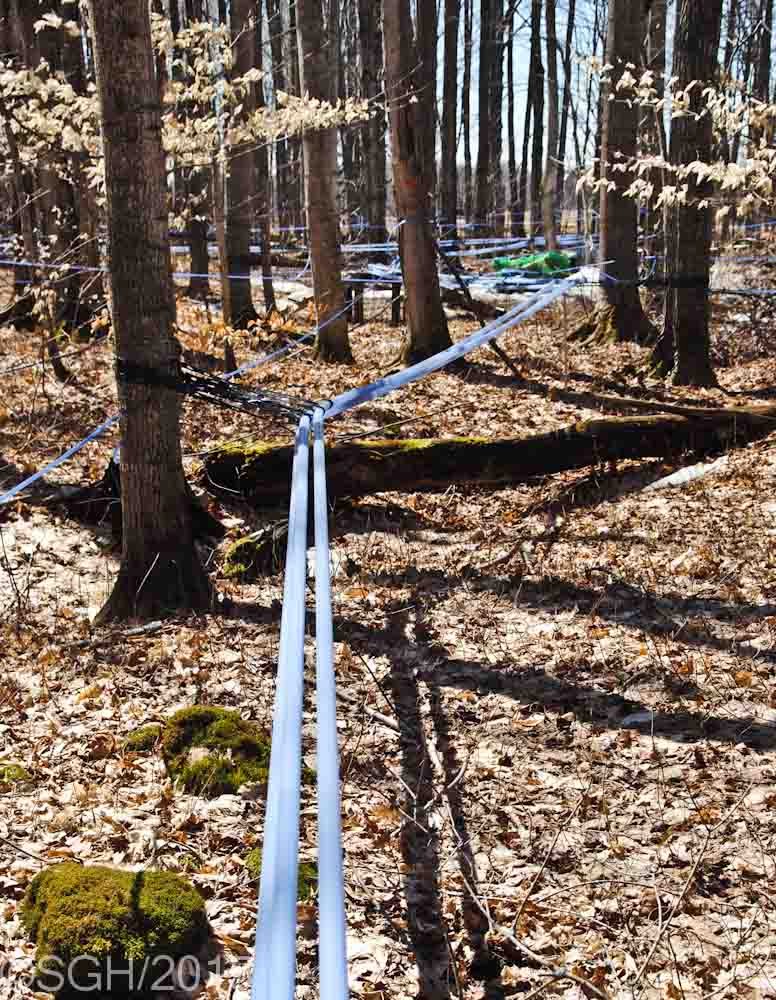 Larger tubes gather the sap and carry it back to the sugar shack, normally pumped through the tubes by a vacuum pump.  Some operators leave the tubing up all year; others take it down and clean it for storage. 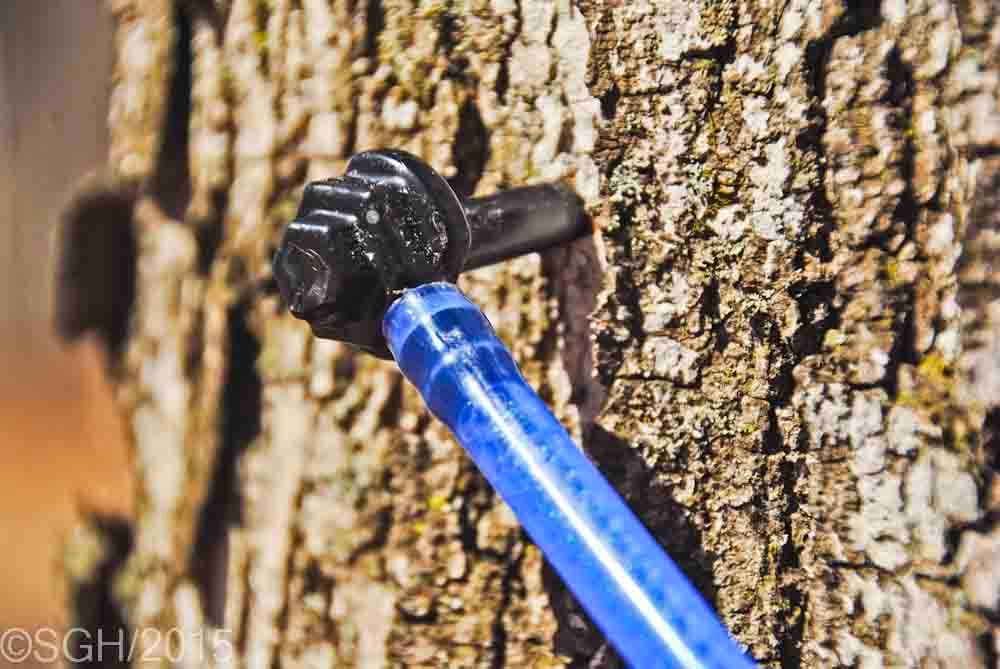 This is the tiny tap that goes in a hole drilled into the tree.  It takes quite a while to retap all the trees for a larger operation every year.  The moderate size operation below has 1100 taps, but they're all on the gentle lower slopes of the Niagara Escarpment, so they flow by gravity with no pump needed. 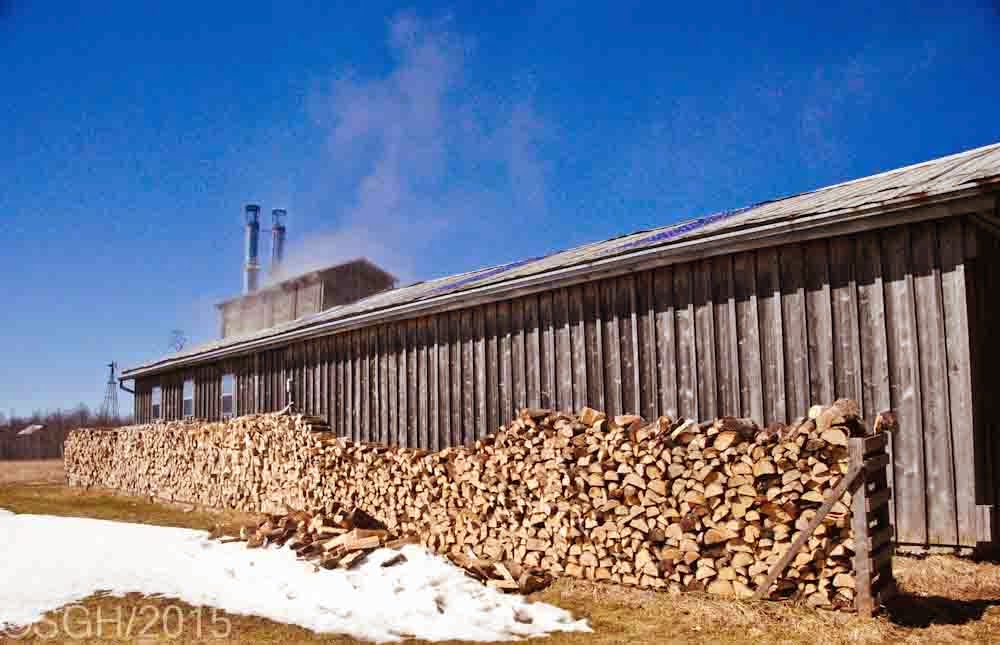 And this is the sugar shack, a large one that provides for a lot of storage in this end.  Firewood is gathered 2 years ahead usually, so that's a big part of the work.  The architecture, with a raised roof over the evaporator, is very traditional. 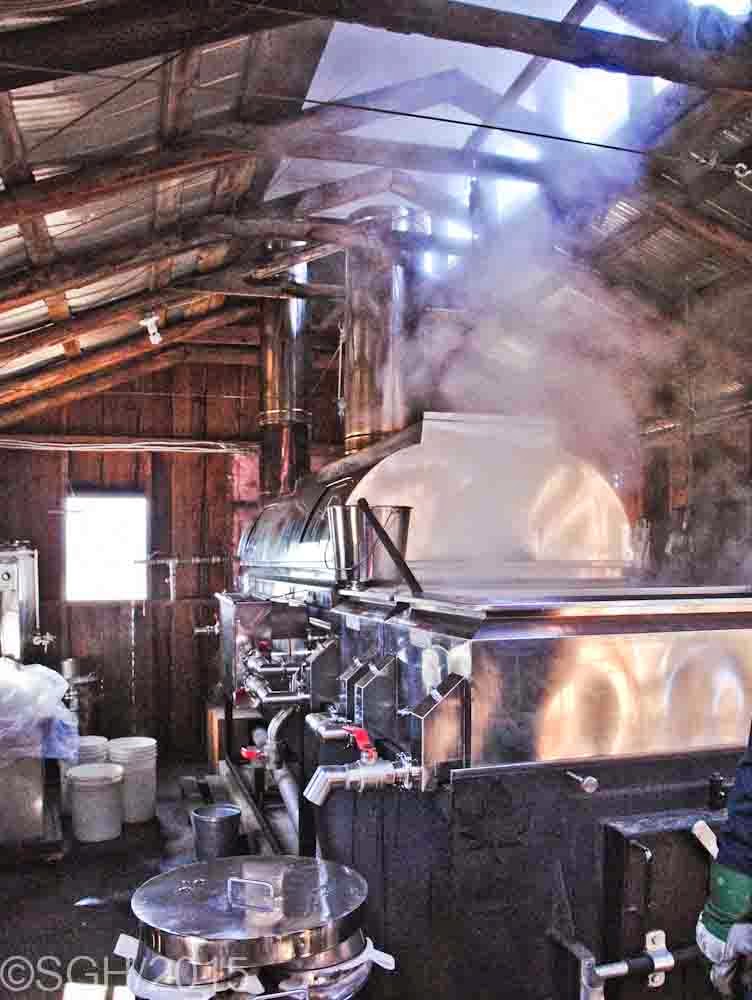 Inside, the shiny modern evaporator looks like this, with chimneys for the boiler underneath, a steam pipe for the warming tank, and the open roof for steam from the finishing pans.  About 40 gallons of sap gives you one gallon of syrup, so a lot of water has to be evaporated before you get the syrup.  The upper dome here is the warming tank where the sap starts, the back pan does most of the boiling down, and the two smaller front pans are for finishing the syrup. 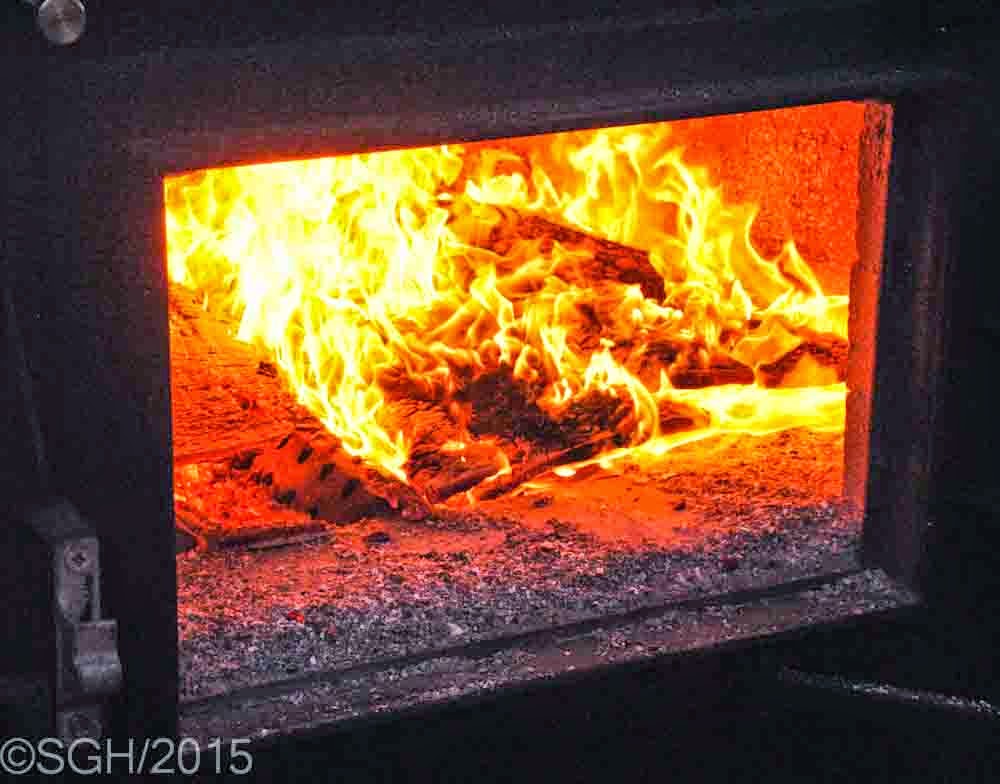 It burns a lot of wood!  This operator has put in a forced fresh air feed beneath the boiler, which results in a more complete burn and a hot fire.  But when finishing syrup you need to be VERY careful!  A few seconds at the end makes the difference between beautiful syrup and a black sticky mess! 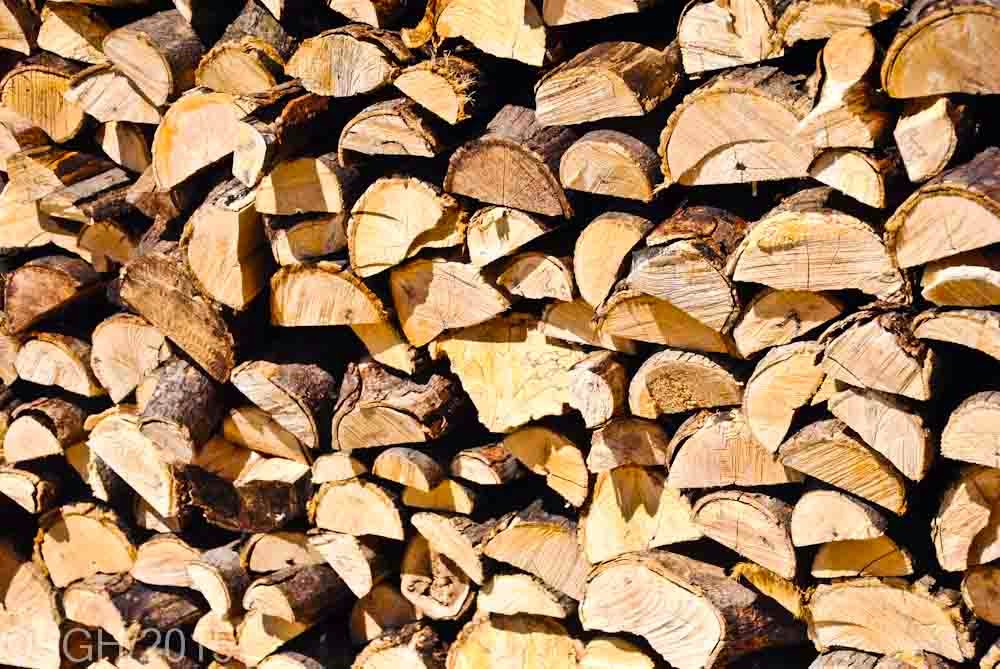 I naively think of the time involved for the farmer as the 6 weeks or so they spend in the sugar shack, long days of being there at the right moment when it's ready.  But talking to the operators you realize that this is more like a 6 month job than six weeks, once you include the firewood harvest, cutting and splitting, the preparation of taps each year, and the clean-up after, to say nothing of the marketing of the syrup.

And this is an artsy picture of bubbles in the sap tubes that my wife thought was neat, and I probably never would have noticed!

Have you ever visited the sugar bush in April?