My next adventure was paddling down the length of the temporary lake created by the flooding of the karst sinkholes.  Two years ago a friend told me this was possible, and last year another friend and I did it, enjoying the exploration.  Others heard about it, and wanted to try it too.  So quite a group of us headed off the other day for a short explore! 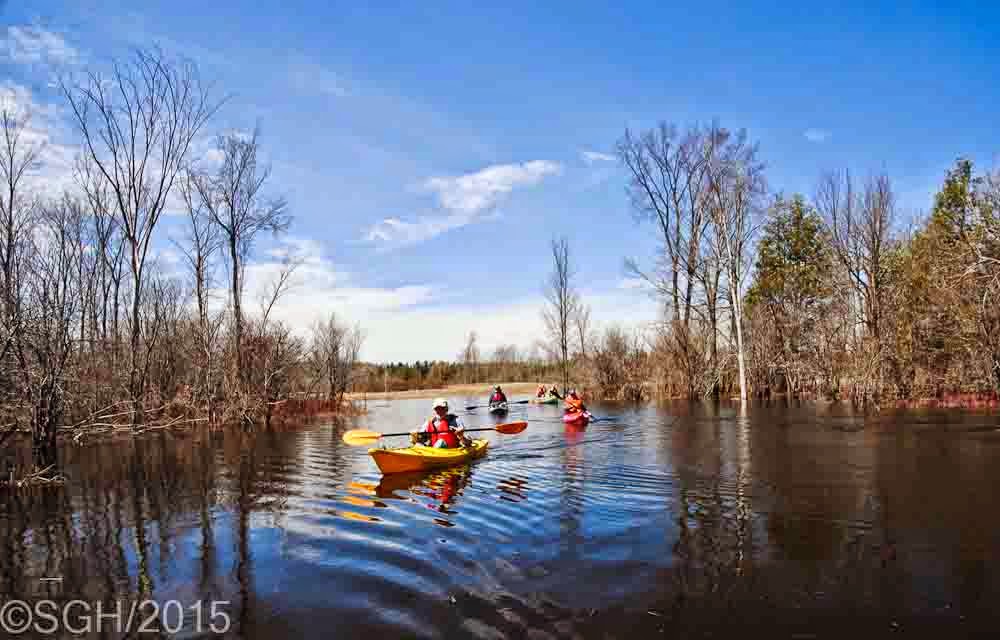 It was a mixed group of canoes and kayaks, and we started down the lake from the sideroad.  Most of the year this is a little stream among tall grasses, perhaps 4 feet wide; my buddies were surprised at the size of the temporary lake, flooding far out into the trees. 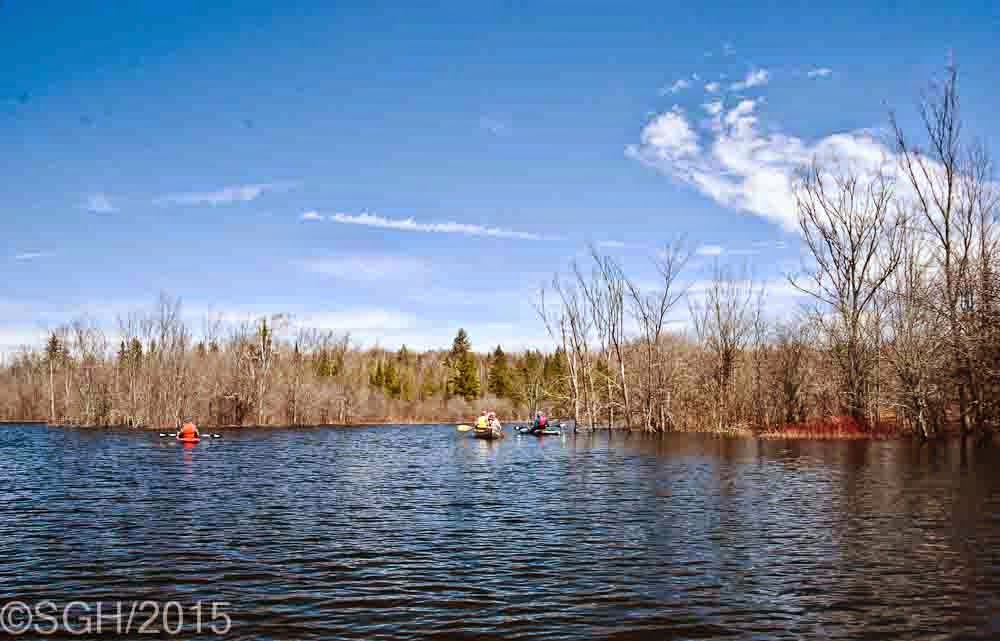 We paddled down the course of the stream until we were over the main cluster of sinkholes.  Some of these guys (they were all guys) haven't been here in the summer to see the contrast, so we're going to have to organize a follow-up walk.  But based on my experience coming in all seasons, I estimate that the main cluster of sinkholes is 20-25 feet below us at this point. 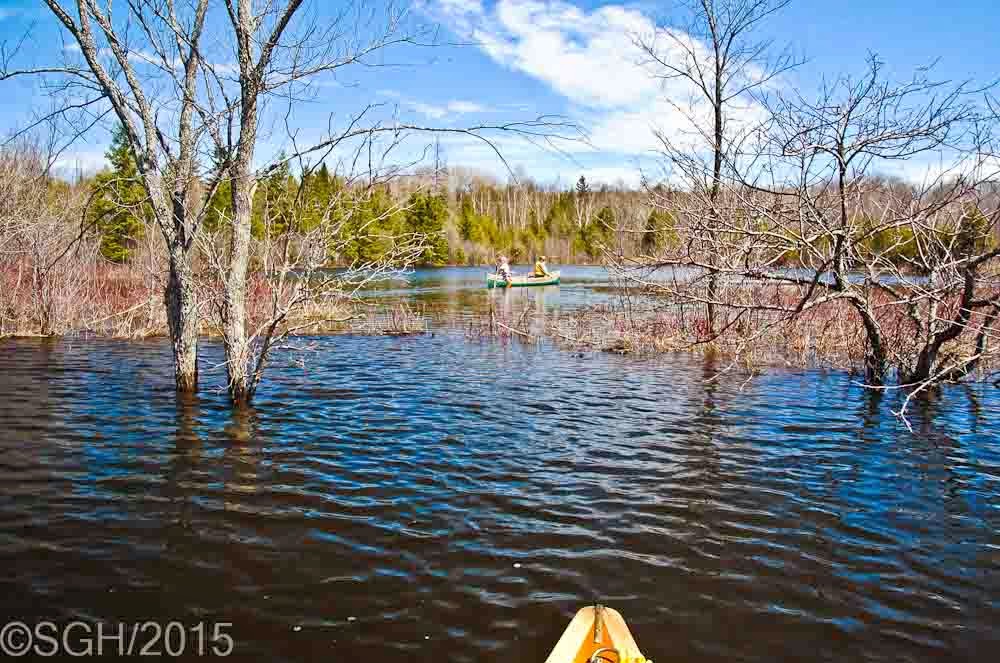 The final sinkhole of the main group is beneath me here, as I paddle toward the gap which takes us into another corner of the flooded lake.  This is the 'perched pond' which in summer sits 18 feet above the sinkholes, but is unconnected to them.  Remarkably, it gets recharged each spring during this flood. 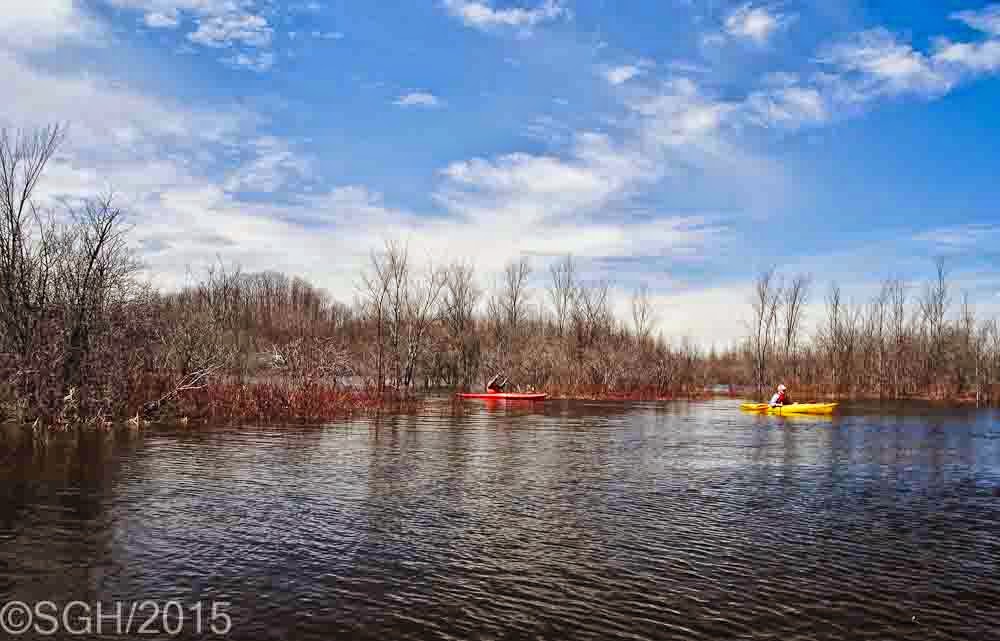 Here two of the kayaks emerge from the lake over the sinkholes behind me, to paddle across the pond - though at this time of year it's all one waterbody. 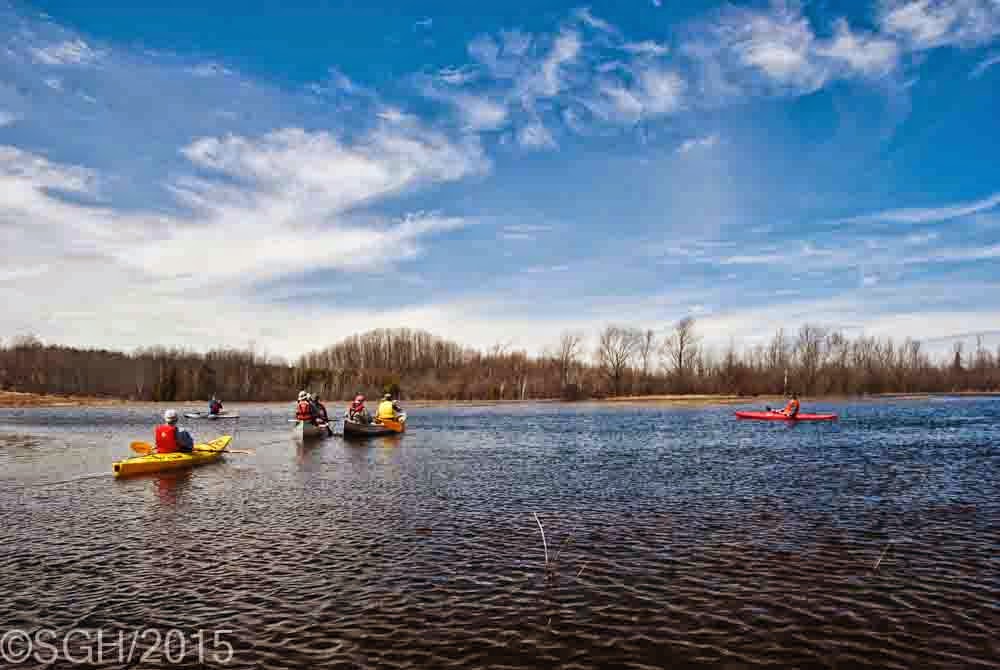 Then we paddled across the old fence line and out into the flooded old field to the south.  There are two large sinkholes here too, approximately beneath that red kayak, though they only have tiny streams draining into them (except for now!). 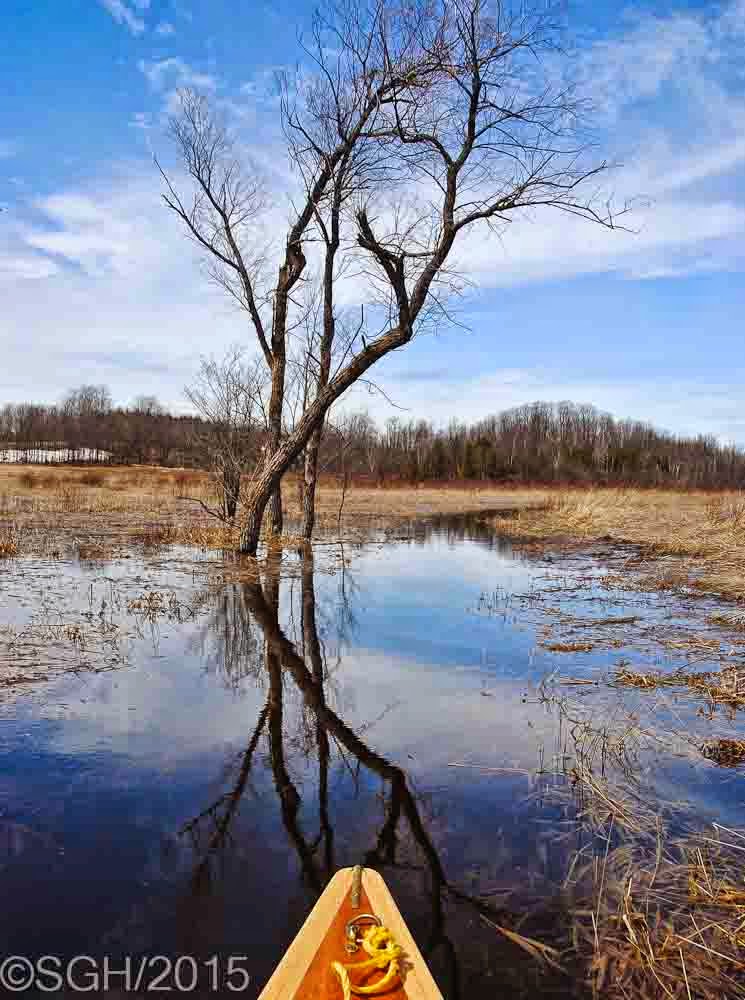 We managed a short paddle down the stream channel beyond this before it became too narrow and we had to turn around - but I liked the startling reflection of these old willows! 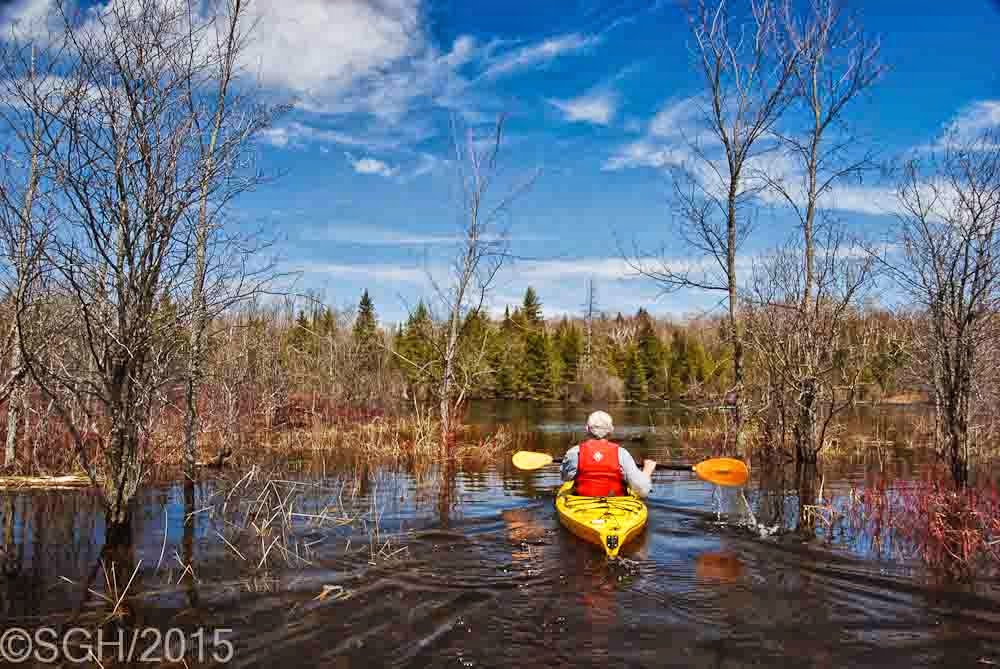 Then it was back across the old fencerow.  Here I'm floating about 4-5 feet above the trail you can walk during the summer. 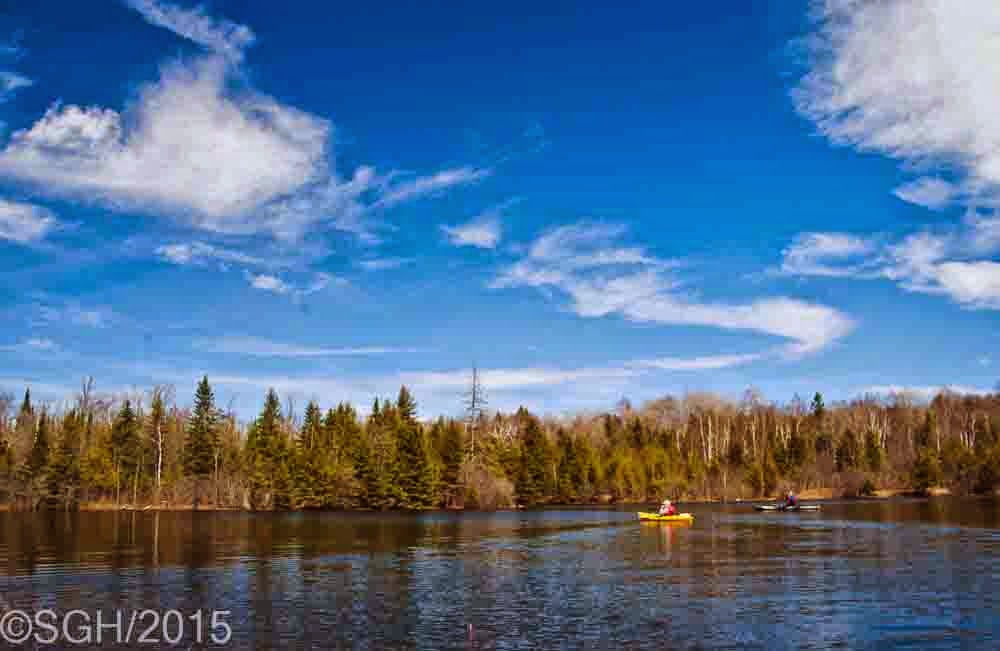 In the pond area you could convince yourself that you are on a remote lake in northern Ontario!  Most of the time we were out of sight of signs of civilization. 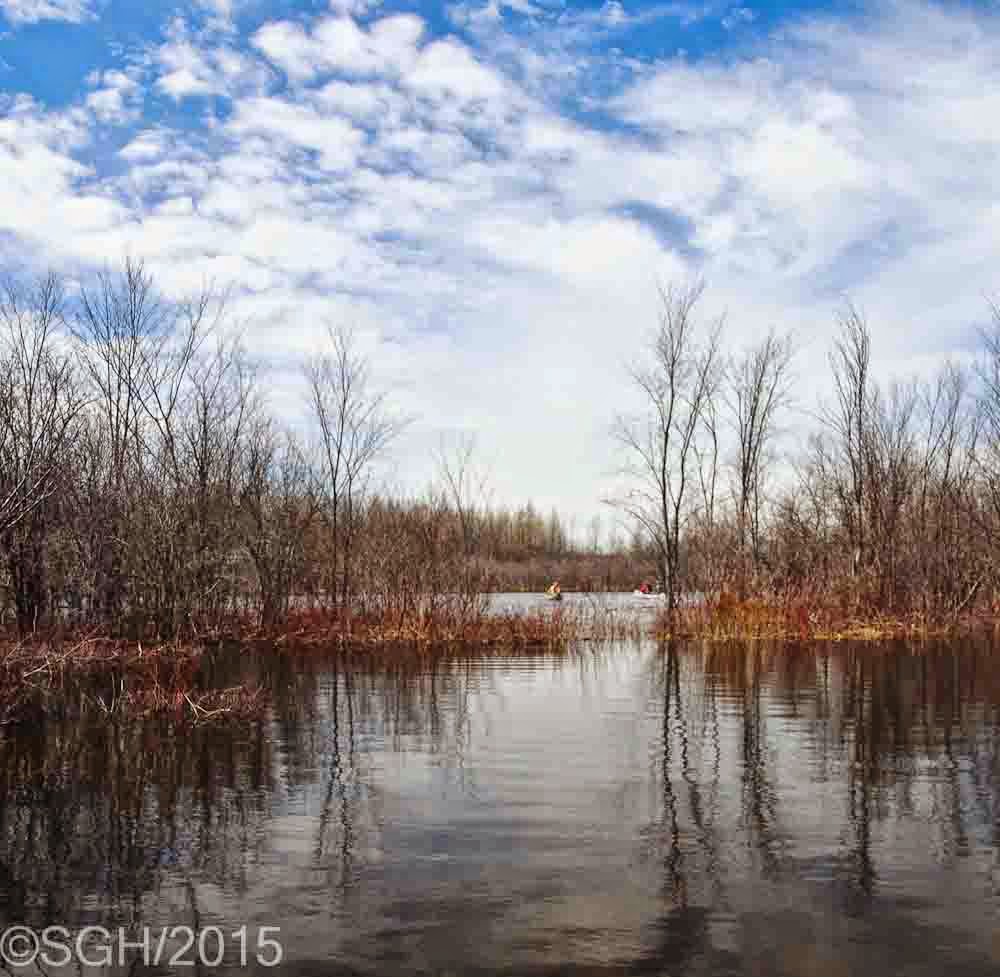 Then it was back through the gap onto the main area of the flooded lake.  As you paddle through the gap you can easily touch the bottom with your paddle, but out in the lake you certainly can't. 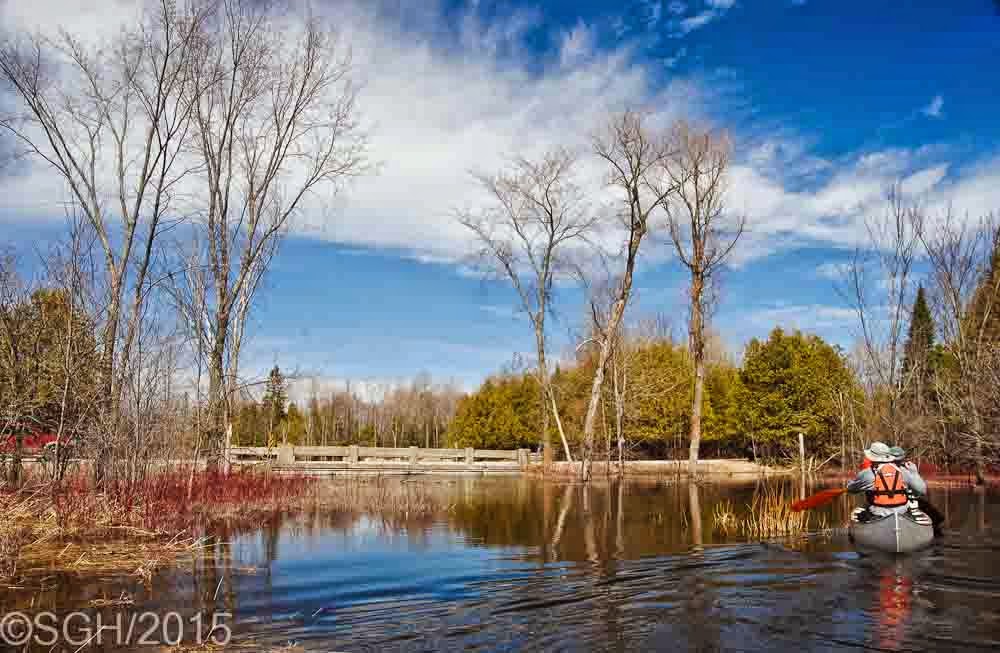 And back to the road we went, not even an hour and a half, but I think the earliest in the year that I've ever had the canoe in the water.  You can just barely see the upper curve of the bridge emerging from the water.  In the summer the stream is about 6 feet down.  I'll share some contrasting photos in the coming days.