Beyond the Sinkholes - the Ephemeral Waterfall

The most interesting part of the Wodehouse Karst system to me is beyond the sinkholes, where the flooded creek flows down the smaller valley further south and creates a temporary or 'ephemeral' waterfall into Bowle's Gully at the Beaver Valley Ski Club. 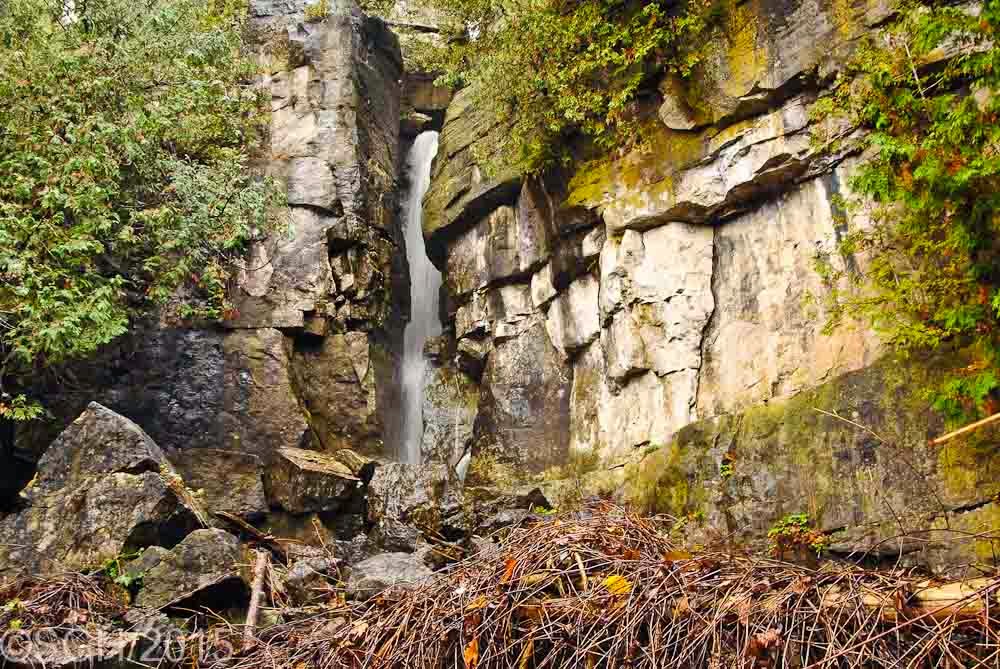 This is the ephemeral waterfall in Bowle's Gully after a period of heavy rain in the fall.  There's just a little flow over the falls, and I was able to get quite close for pictures - though it was quite an adventure to get there! 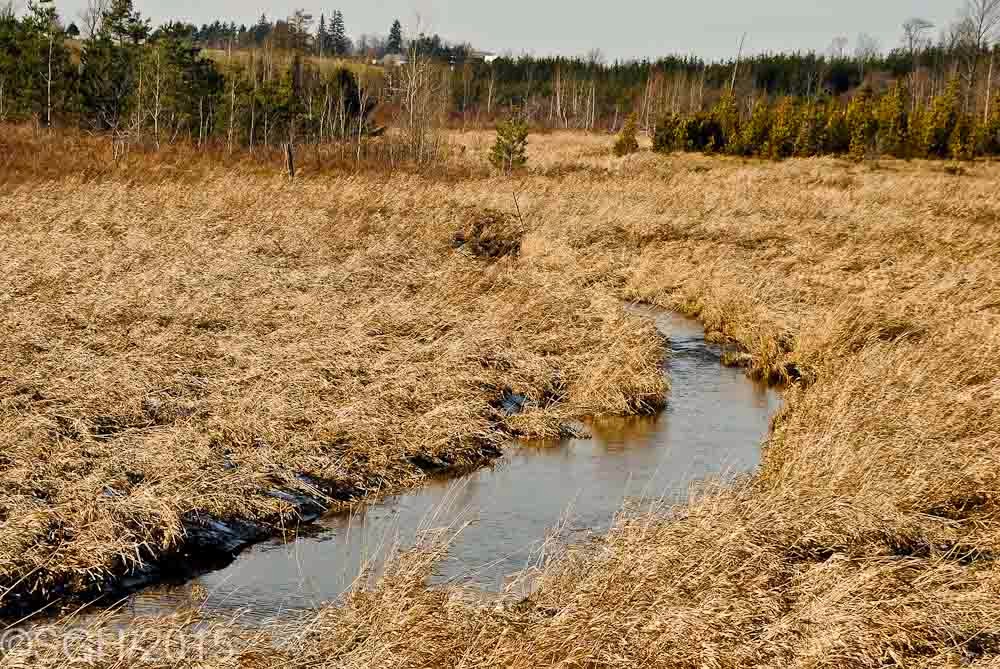 But normally the creek flowing down the southern valley beyond the main cluster of sinkholes is a very small stream, just gathering local runoff from a few farm fields and a wetland. 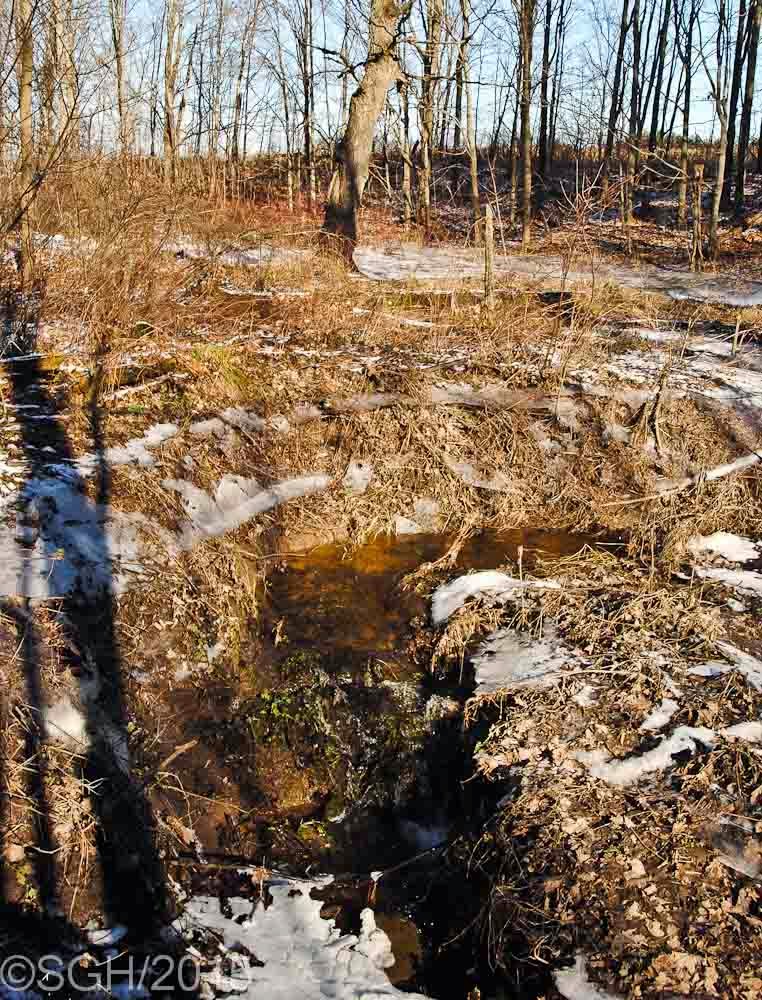 It ends in this very small sinkhole at the ski club, where the water trickles into the cracks between the rocks, and emerges far down the slope as a spring. 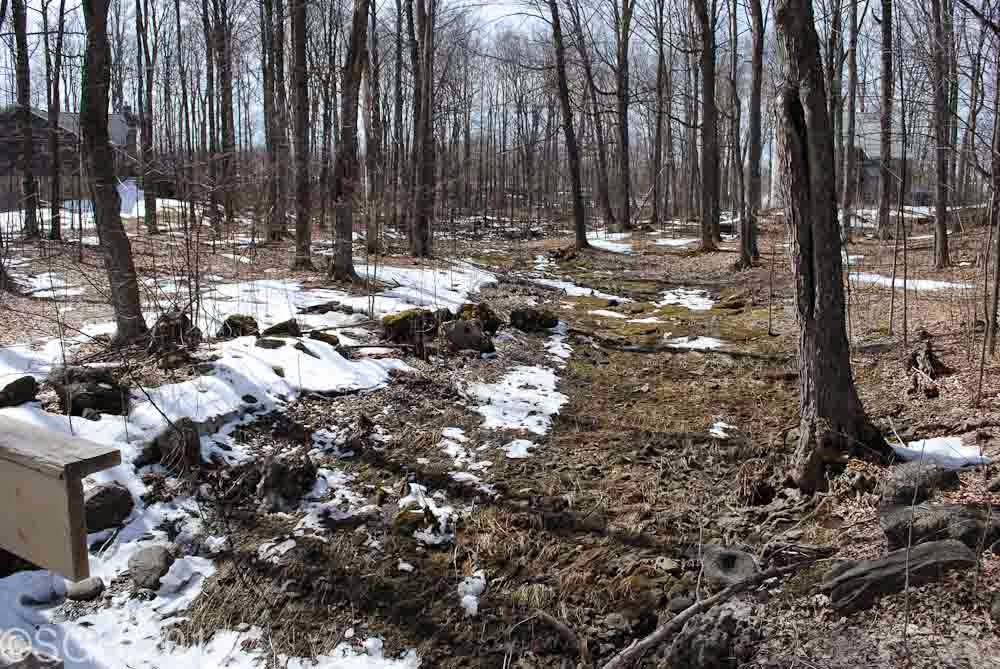 The channel in the limestone beyond that, between the ski chalets, is dry - usually for about 50 weeks a year. 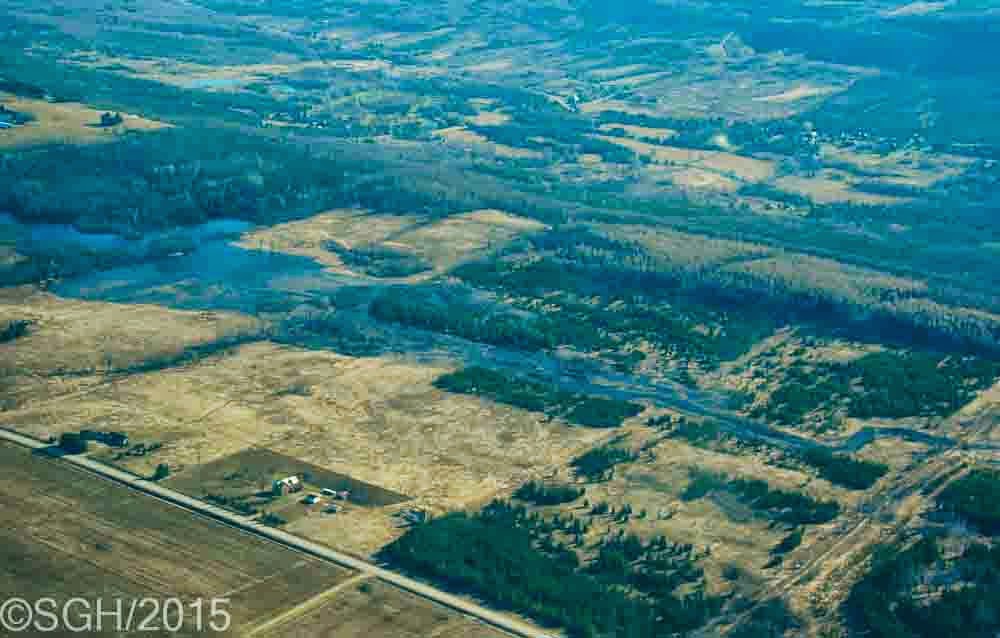 But during the spring flood creating the temporary lake (on the left), the excess water flows into the small stream valley southwards (towards the right), flooding that valley and raising the water level in the stream dramatically. 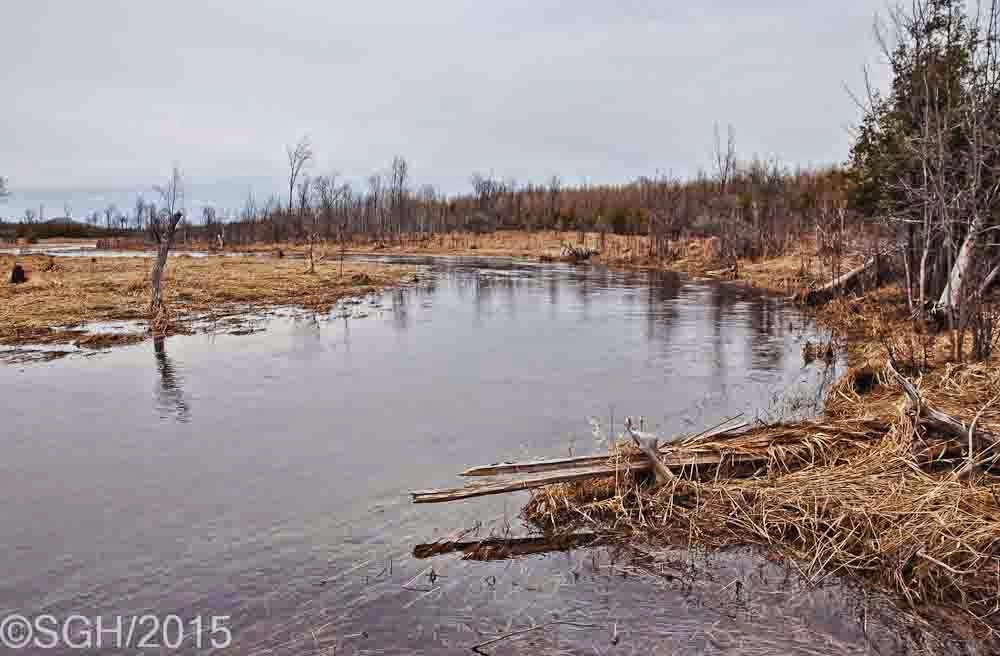 The stream swells to many times its normal size. 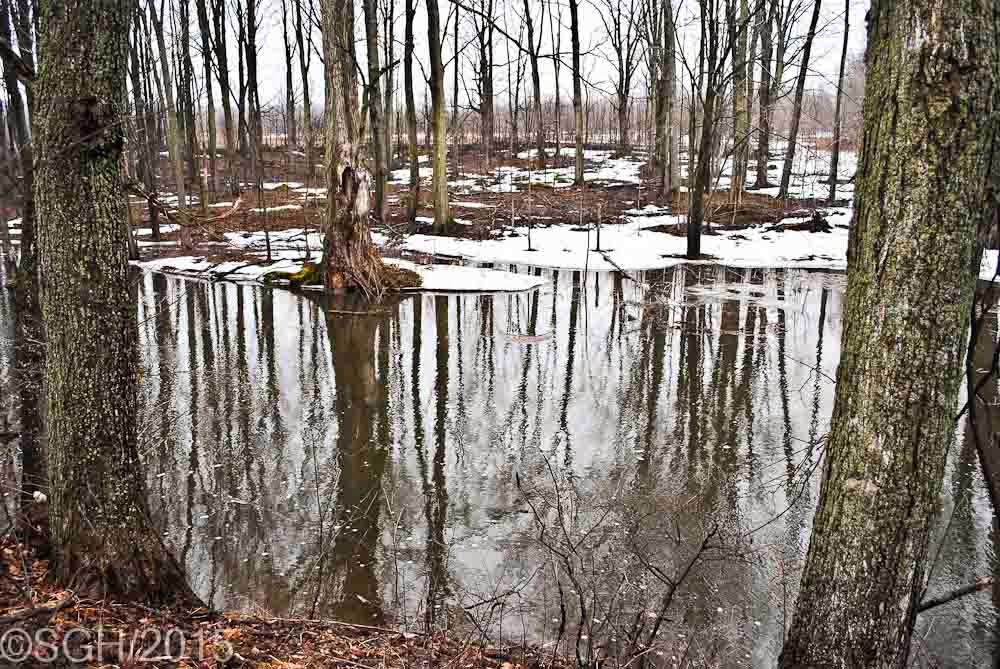 It flows across that small sinkhole without ever even noticing, here 2-3 feet deep and 30 feet wide, 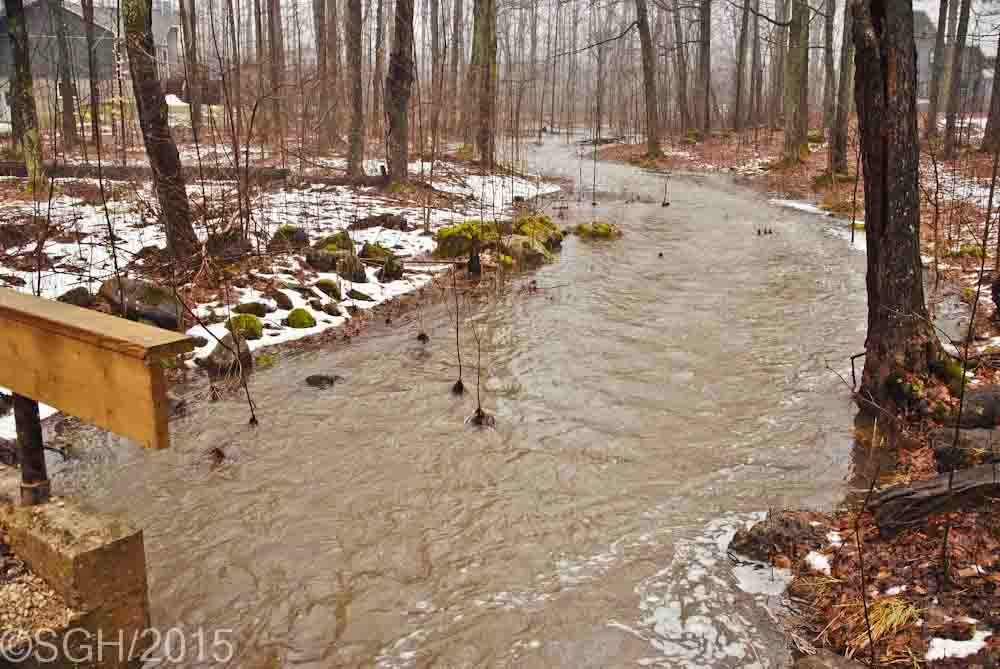 and floods the normally dry stream channel with a torrent of rushing water, heading straight for the edge of the cliff. 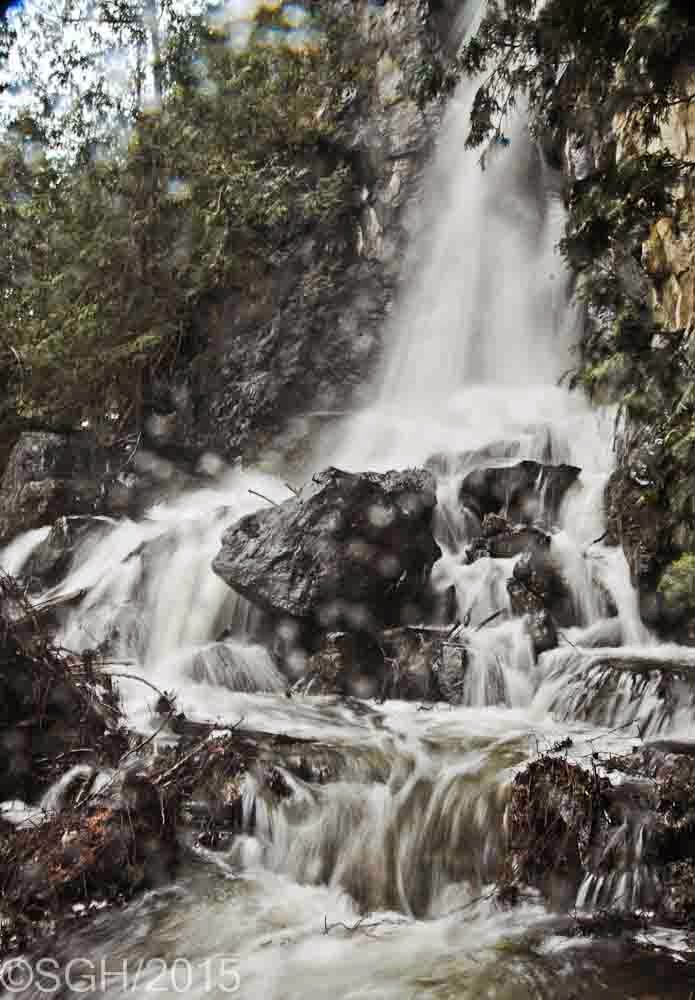 And in the spring, this is the waterfall that results.  After last year's heavy winter and extended spring runoff, the waterfall lasted nearly 6 weeks, the longest I've known. 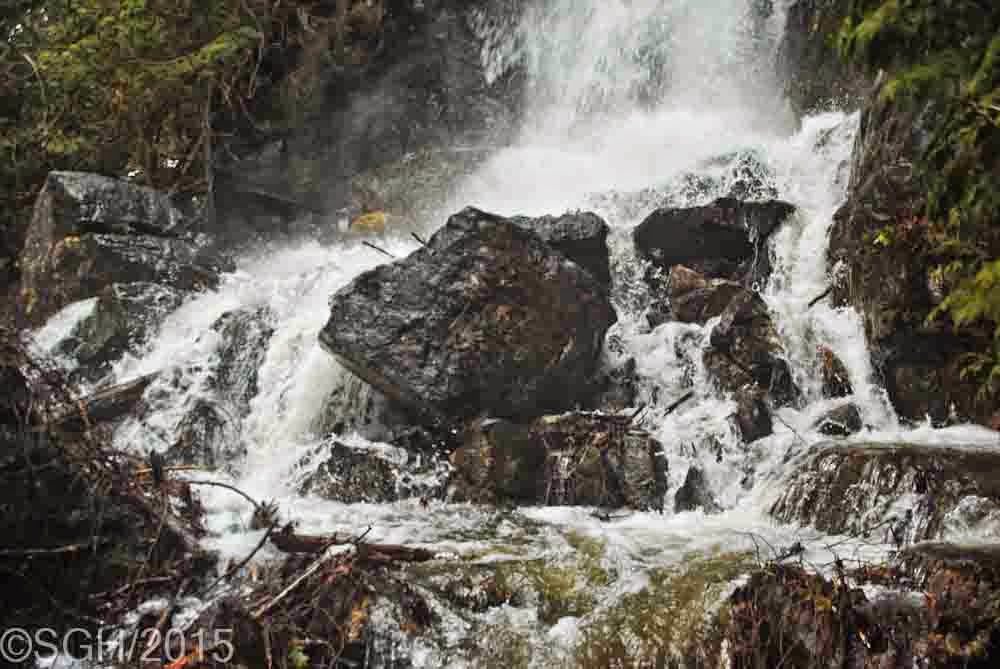 As you can see from the water swirling toward my feet, I could not even begin to get close to the bottom of the falls to get a picture like the first one above; the entire foreground of that picture was flooded with a foot of water bouncing off the boulders. 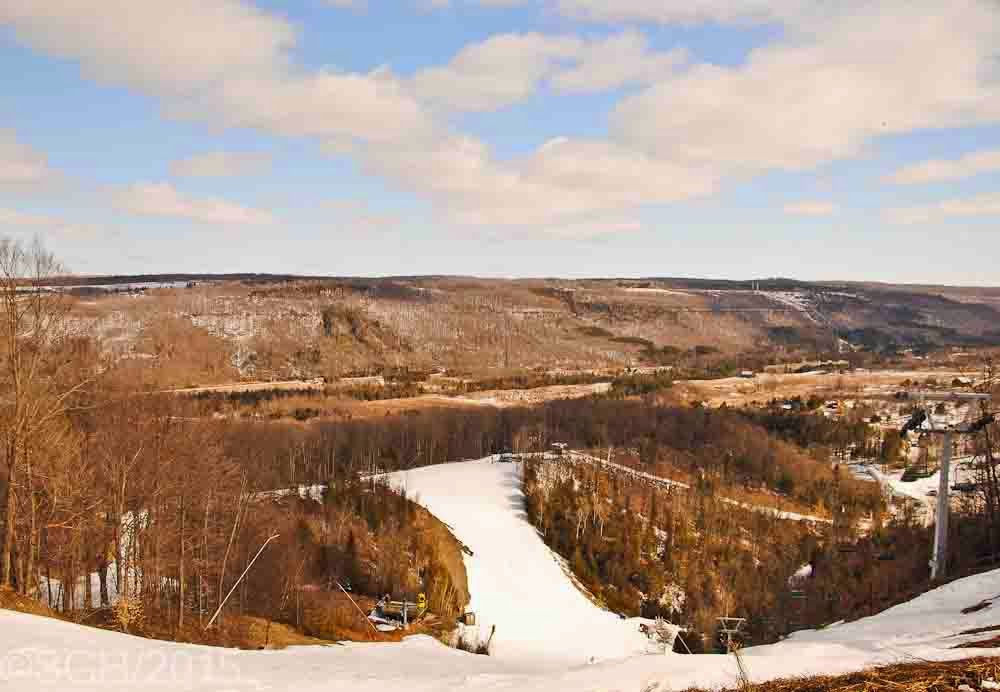 Finally, this is Bowle's Gully, a very steep sided ravine occupied today by the Avalanche ski run at the ski club.  This is one of those runs I would look over the edge at and say 'no way'!  The waterfalls is around the corner to the right.  But thousands of years ago when glacial meltwater was pouring over this waterfall all year round, it carved out this ravine eroding a steep-sided valley down to the right in the picture, leaving a cliff along the top, and slopes cut through the soft Queenston Shale below.

It's the entire Wodehouse drainage system that intrigues me, from the springs where it originates, through the sinkholes and the temporary lake created by spring runoff, to the ephemeral waterfall, to the glacial valley below.  The waterfalls is a spectacular sight, but then the stream dries up, the sinkholes upstream handle all the remaining flow, and the waterfall disappears for another year.  A small creek is left tumbling through the valley pictured above after emerging from the spring on the slopes.