We actually visited all 7 farms on the Kemble Maple Syrup Tour, so we saw a lot of different scale operations, from very small family affairs, to very large commercial operations.  Here are a few more examples of the smaller family style, so you appreciate the variety of sugar shacks and boilers! 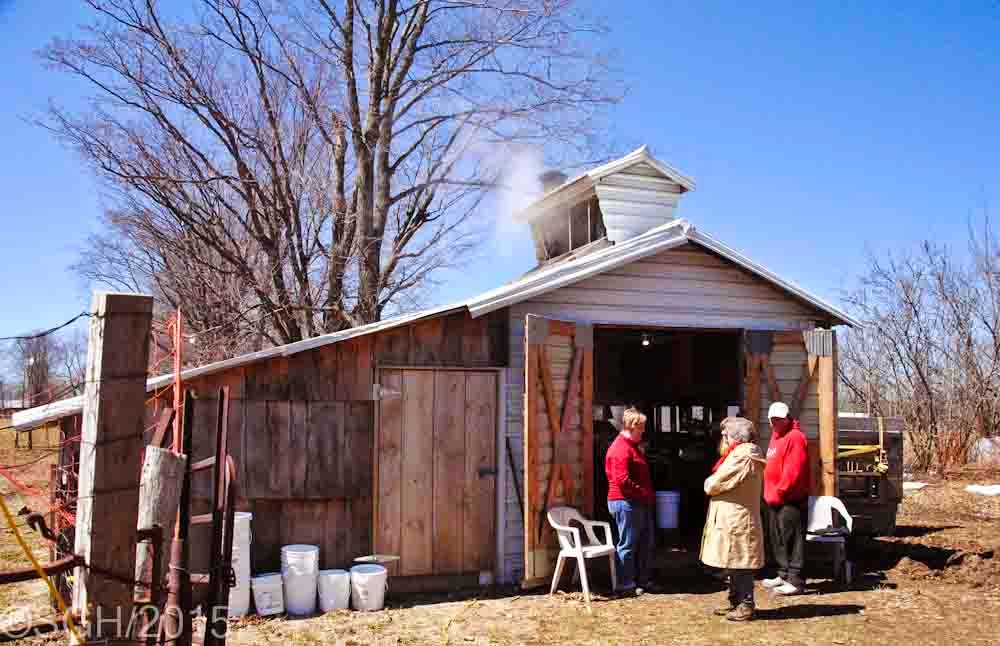 This was the biggest of the small family operations, with a small sugar shack not as large as a garage, and an attached woodshed.  They had to bring their syrup in a bulk tank from a woodlot across the road where they tap about 300 trees. 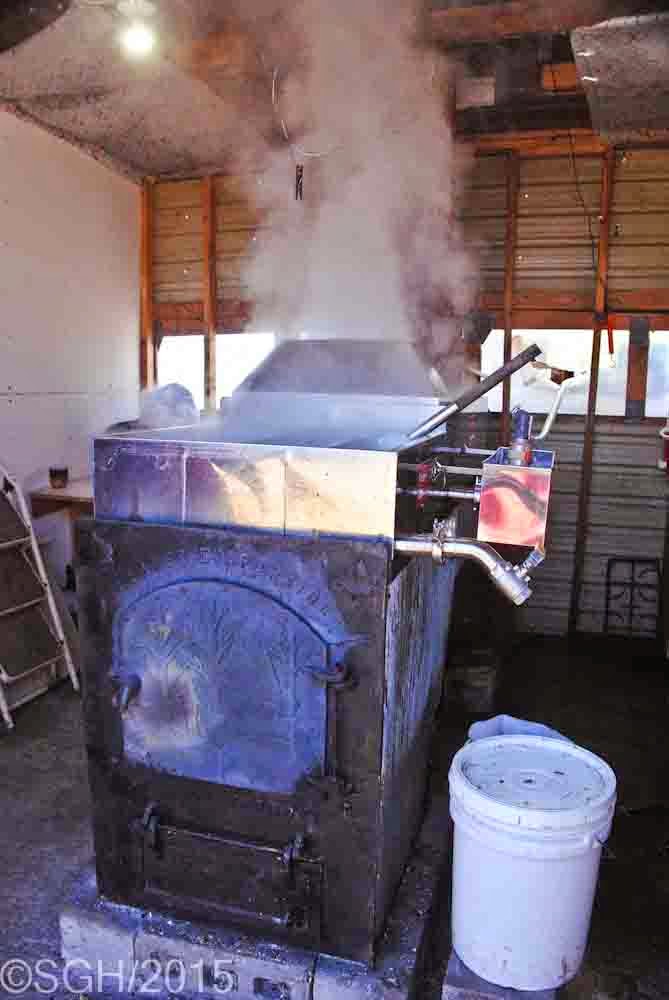 But it was a 'real' boiler and evaporator, with the main evaporating pan to the back, the finishing pan on the front, a chimney and steam pipe, and the raised roof to let out the steam. 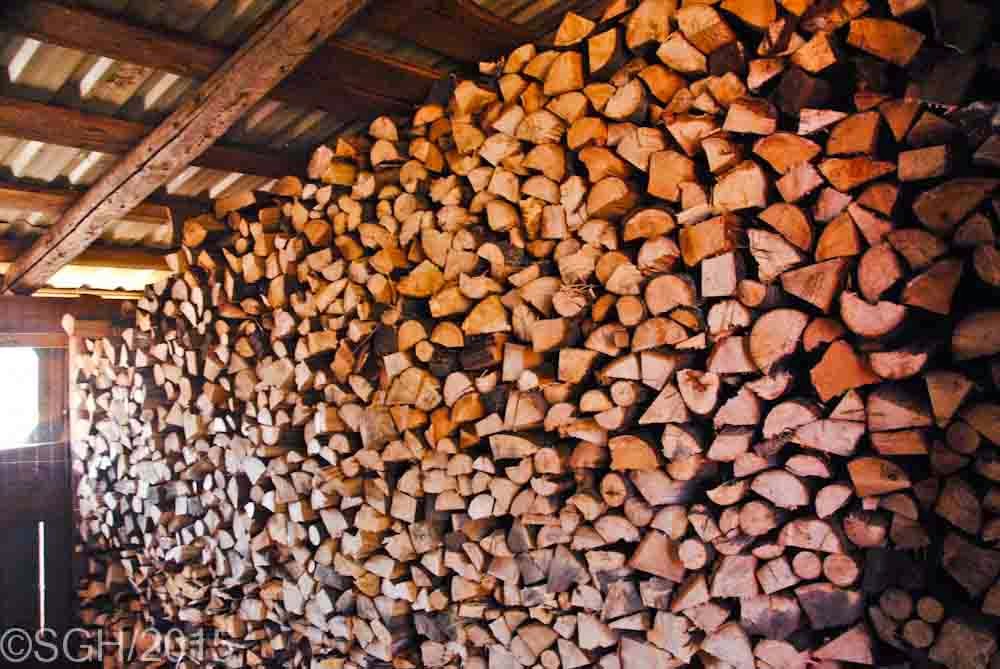 And of course lots of wood in the woodshed next door - for this size of stove, split very small. 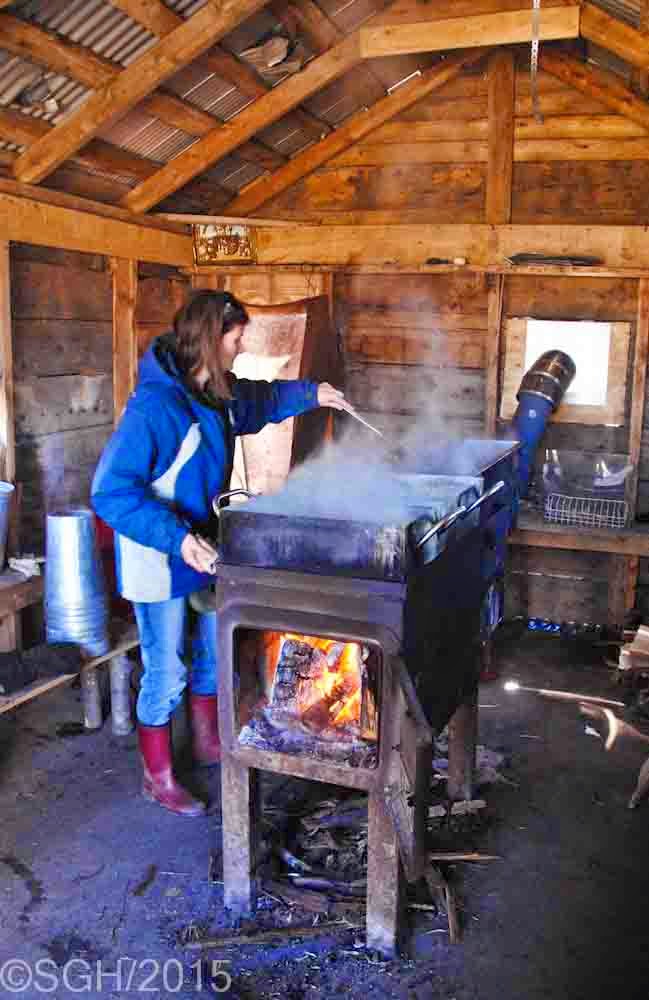 Another family operation had a simpler set-up, with an old wood stove boiler, three separate flat pans on top for evaporating, and just a pipe out the back window for ventilation.  Simple, but the syrup doesn't taste any different.   This family just makes enough for their own use and for gifts for friends. 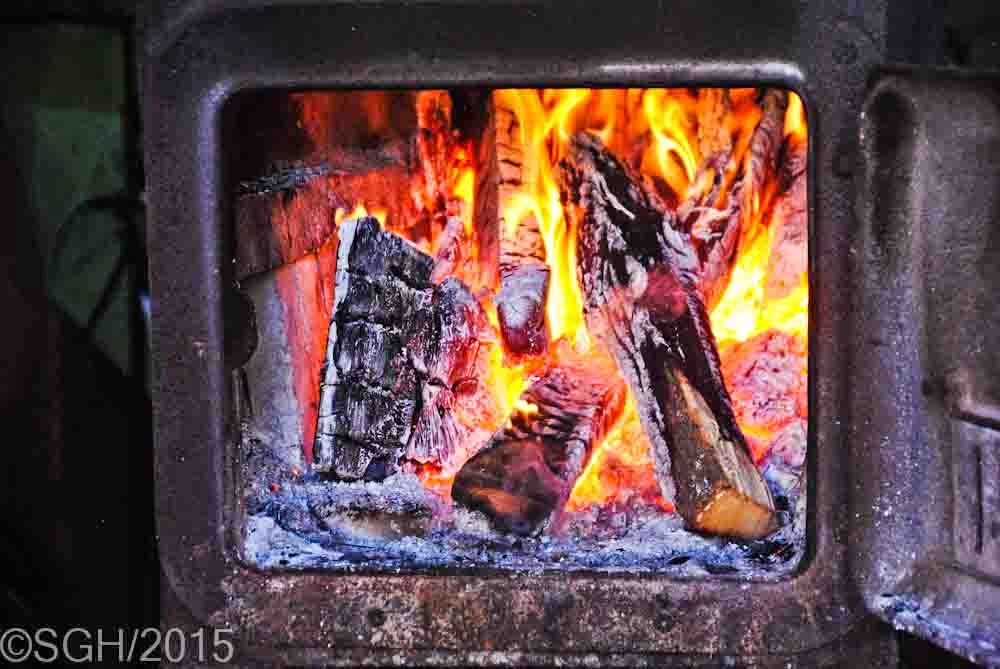 All of them use up a lot of firewood! 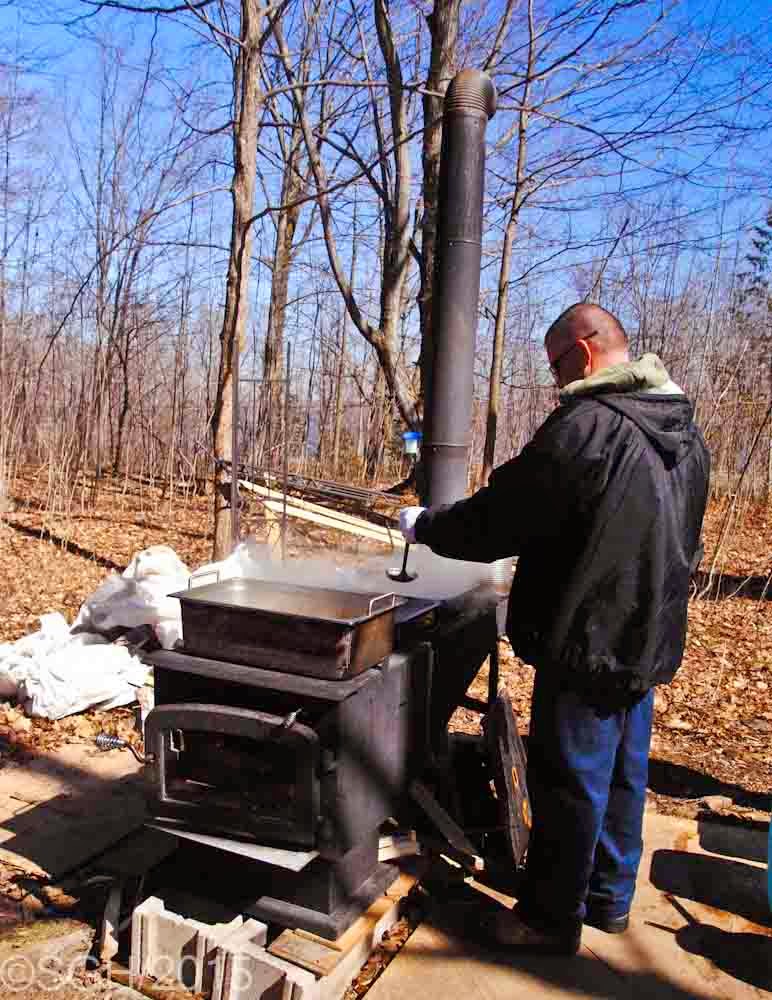 There was no sugar shack, just an adapted old woodstove with 3 pans on top.  As you can see, the syrup is just ladled from one pan to the next as it gets a higher sugar content and moves toward being syrup, from front to back. 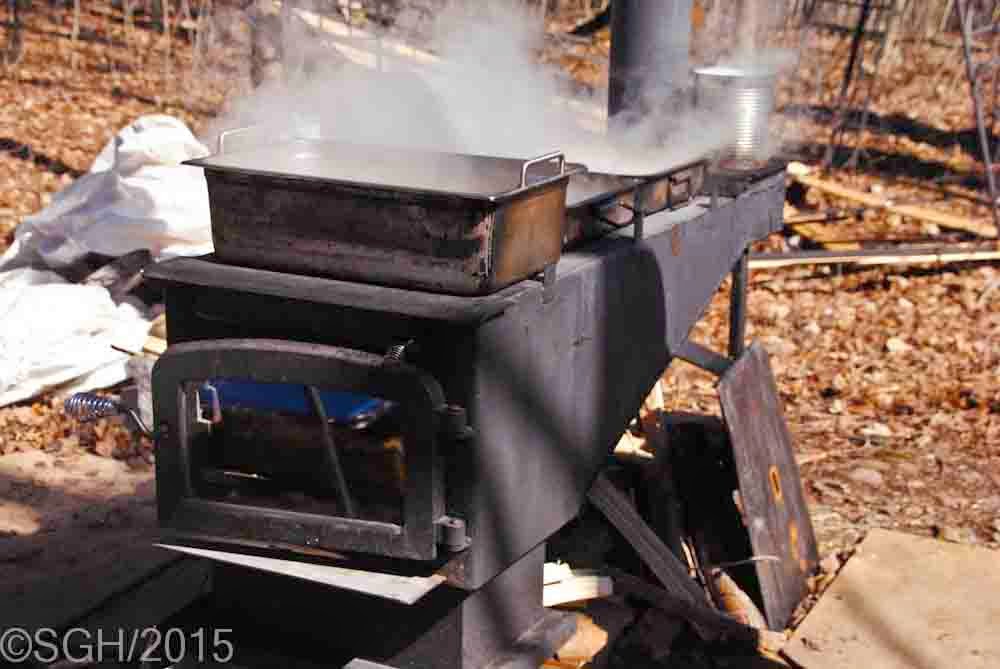 This stove was built out of an old wood stove on the front, with the back taken off and a large triangular box added to extend the firebox to about 4 feet.  The top is open to the fire beneath those pans, and all the work is just done outdoors. 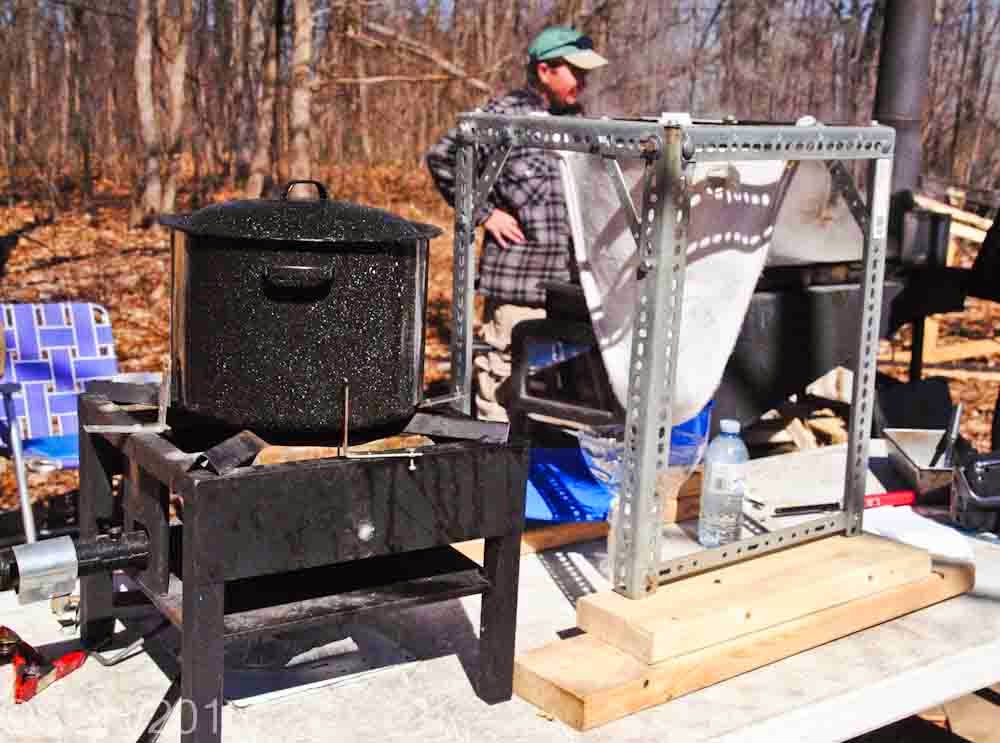 This is how the syrup gets 'finished'.  When nearly ready it goes in the pot on the left, over a propane burner where the heat can be controlled more carefully.  With a candy thermometer you watch very closely for the moment when the boiling spreads to rising bubbles over the entire pot, and the boiling temperature rises from 212° to about 219°.  Off it comes, and gets poured through the heavy felt strainer on the right, then into bottles.  This part of the process is basically similar on all operations, though usually indoors. 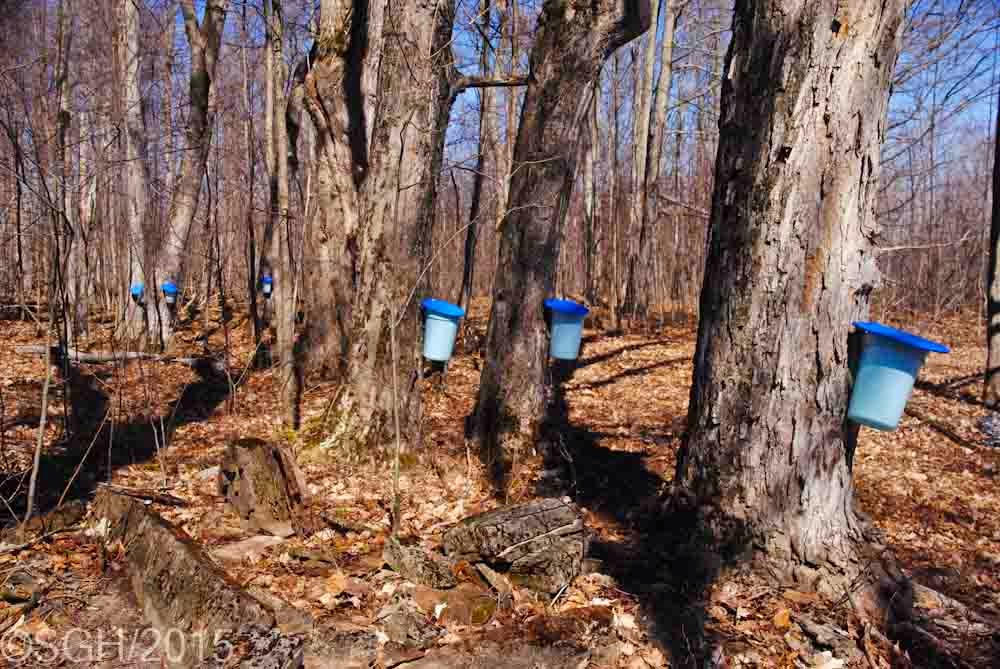 This small operation was the only one where we saw the traditional buckets hanging on the trees.  These are what means maple syrup season to me!