The central section of the Beaver Valley is the part I know as 'The Valley'.  It's closest to home, it's the most scenic, and it's full of wonderful places to explore.  There are waterfalls, the Bruce Trail, karst sinkholes and springs, and viewpoints over the valley.  It's especially beautiful in the fall.  This is the third in a series of posts describing the entire Beaver watershed. 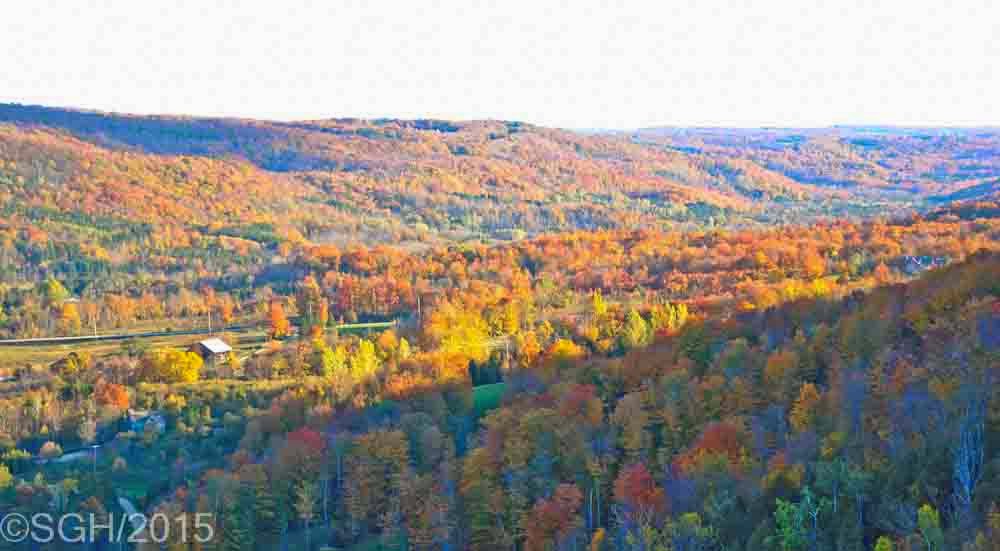 The upper part of the valley in this area is the narrowest, here pictured from the top of the Beaver Valley Ski Club.  and far up at the end on the right, the Boyne, a tributary of the Beaver drops over Hogg's Falls and joins the Beaver. 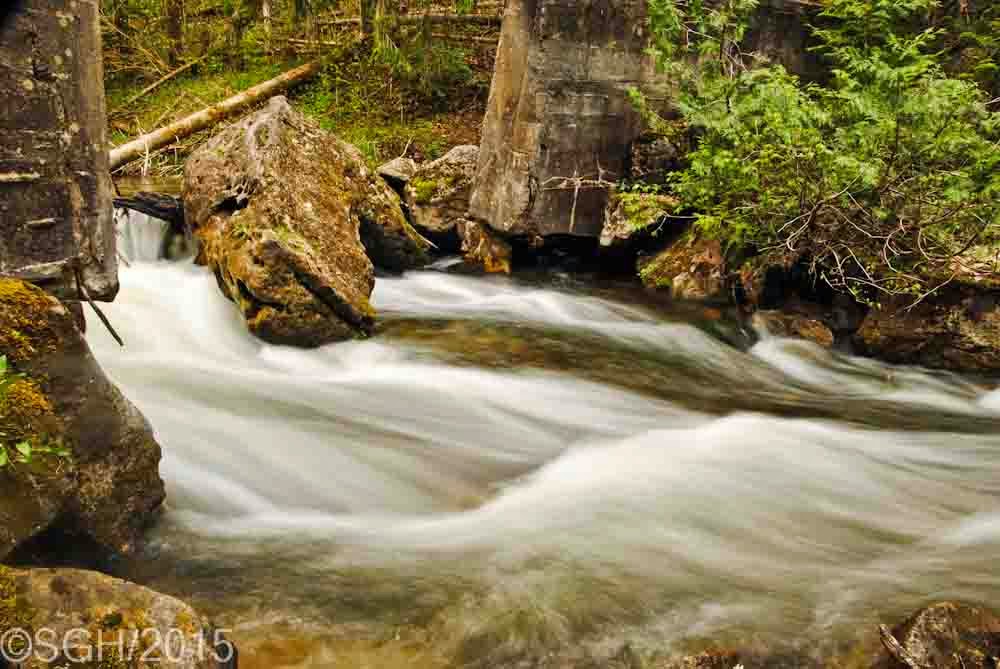 Ironically, the Boyne, here pictured just above Hogg's Falls - a bit of the old broken dam shows up on the left - is larger than the Beaver, because much of the flow of the main river, dammed to form Lake Eugenia, now goes through the flumes to the power plant. 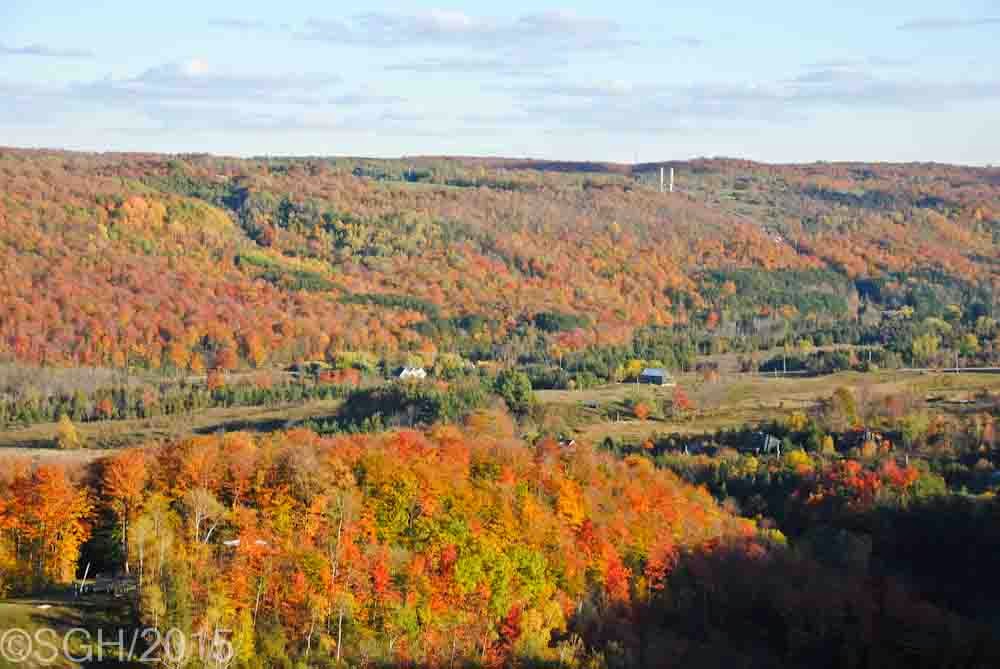 You can see the two flumes leading to the power plant in this picture, the two towers on the far side of the valley being the pressure relief valves or 'stand pipes' for the flumes.  I'll include a post about it soon. 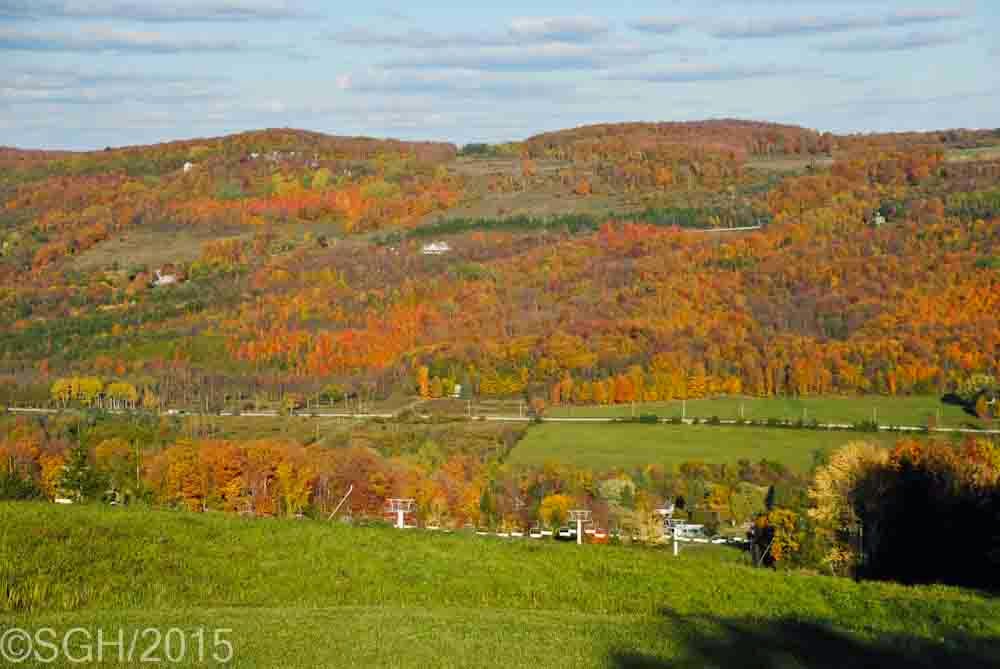 The centre of the valley here is dominated by the two ski clubs, the Talisman hills now closed.  There are numerous ski chalets scattered over the slopes and around the two clubs.  Only a few open fields remain on that far slope, but I've seen pictures from 50 years ago showing mostly open fields! 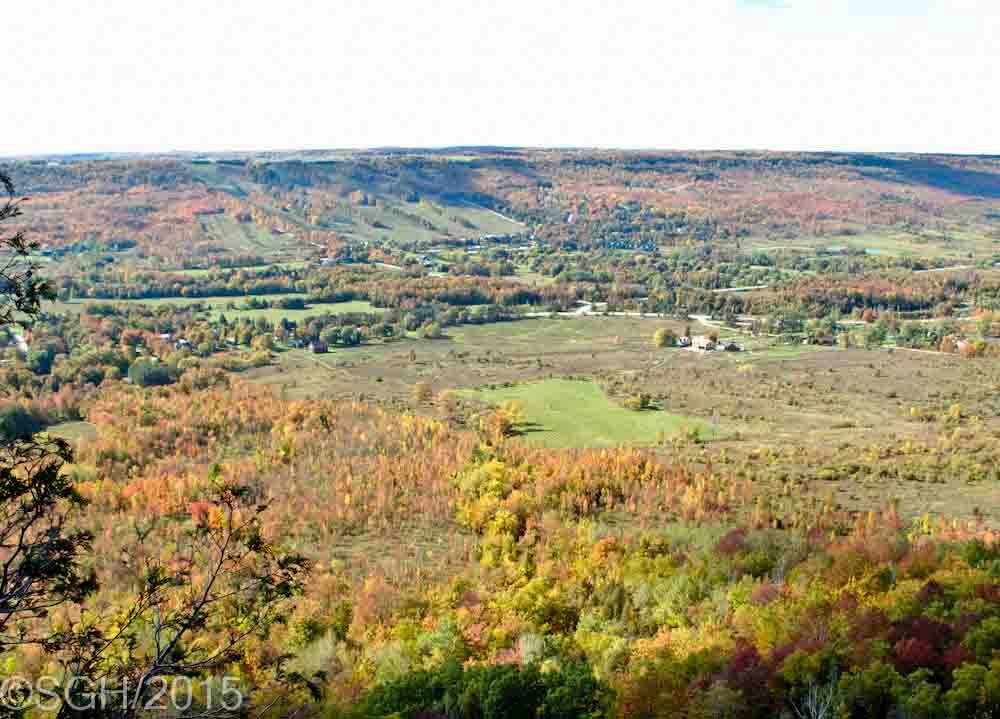 From the top of Old Baldy you get a view encompassing the former Talisman ski runs just a mile or two further north. As well you can see some of the houses in the village of Kimberley among the trees on the left, plunked right down in the middle of the valley. 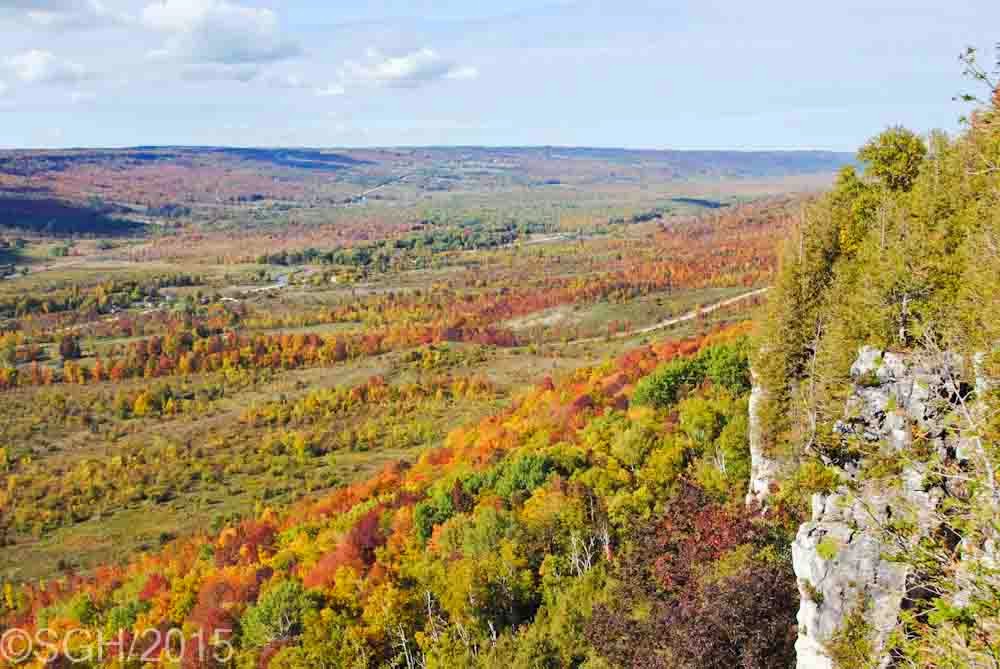 Looking north from the cliffs you see the valley gradually widening as we reach the end of this central section of the watershed. 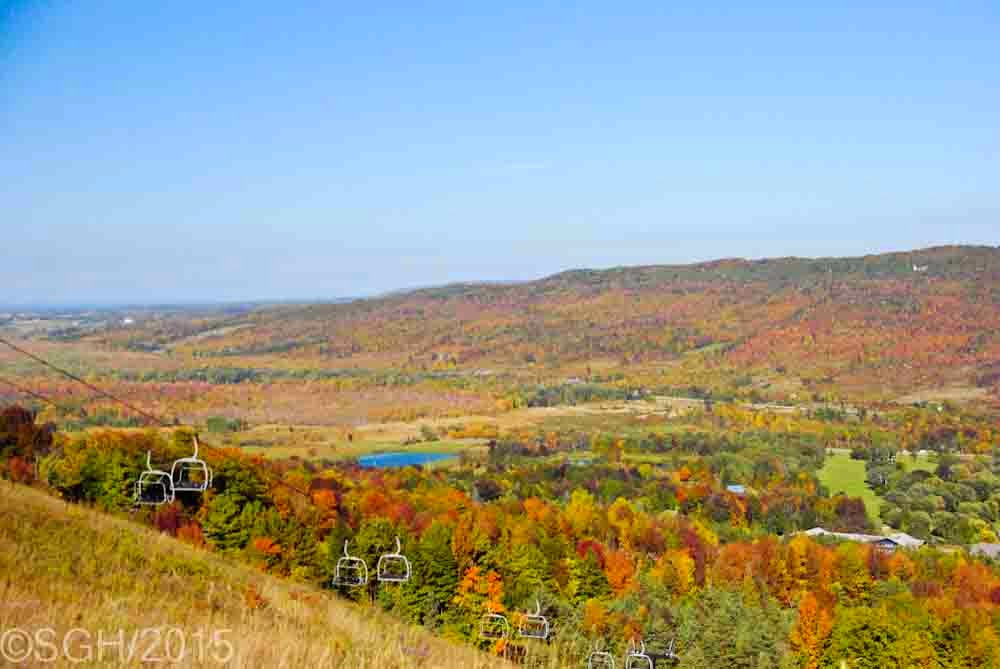 And from the opposite side of the valley, at the top of those old Talisman ski slopes, you see where the valley starts widening out to form the lower valley that I'll describe in tomorrow's post. 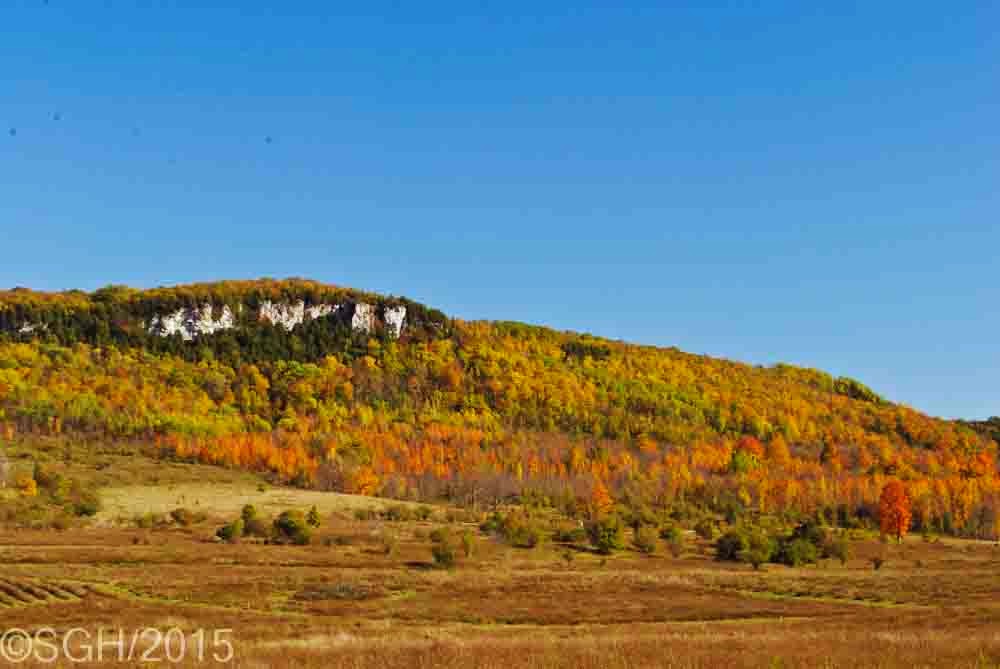 There are so many interesting things to see in this central scenic part of the valley.  By the time I'm finished you'll be getting tired of pictures of Old Baldy, here taken when driving past last fall. 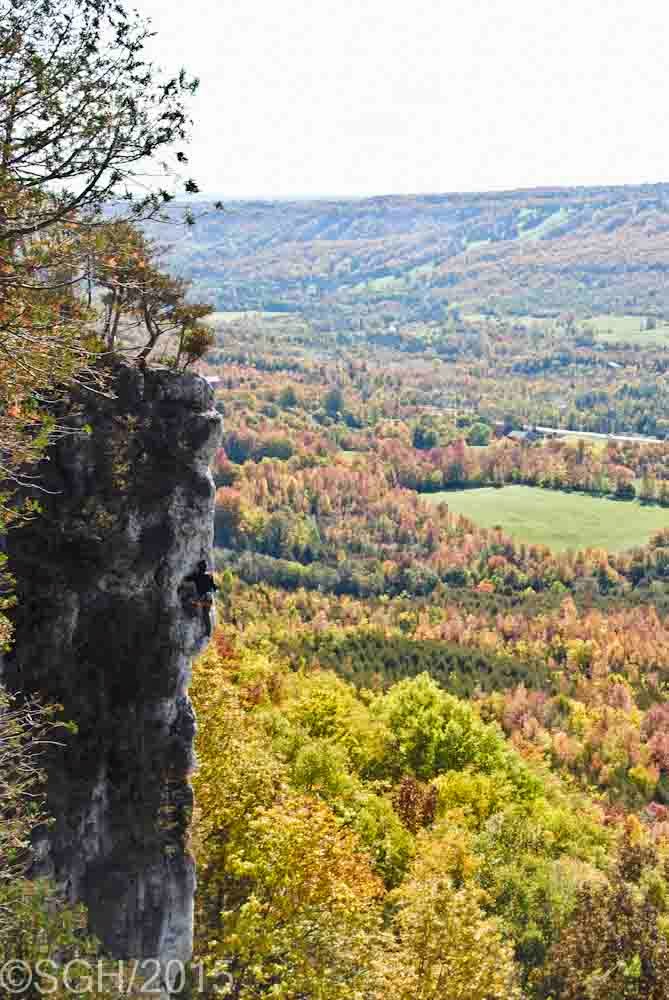 And here taken on a walk into the viewpoint from the cliffs.  Those are the slopes of the Beaver Valley Ski Club in the distance, and our home is above the edge of the escarpment, beyond those slopes.  Did you spot the rock climber? 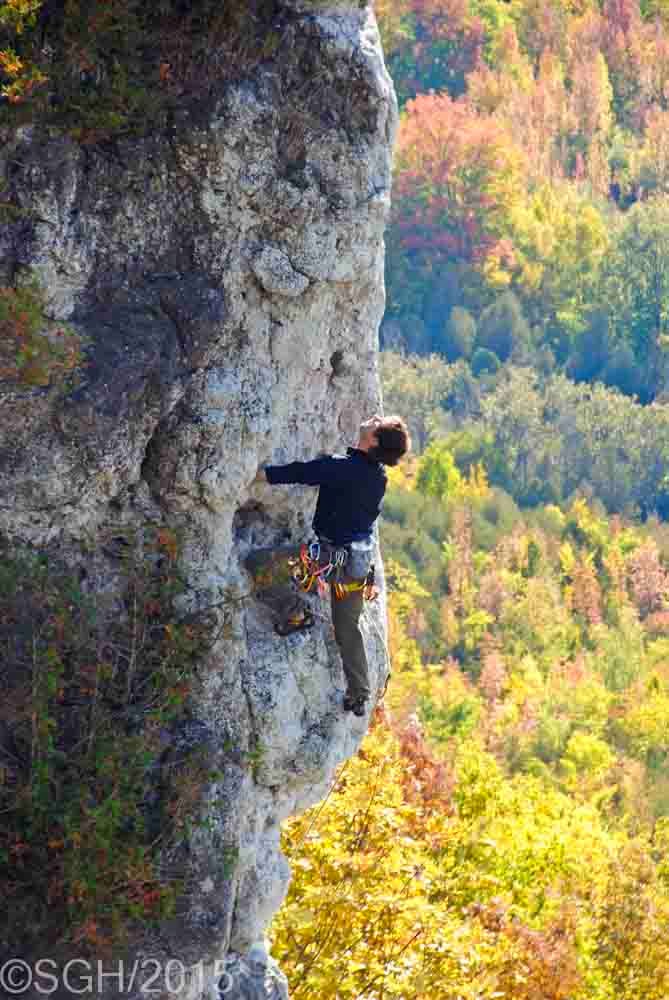 Here he is, hanging in the middle of space on that cliff!  Sure surprised me, but just a few minutes later he was clambering over the top edge. 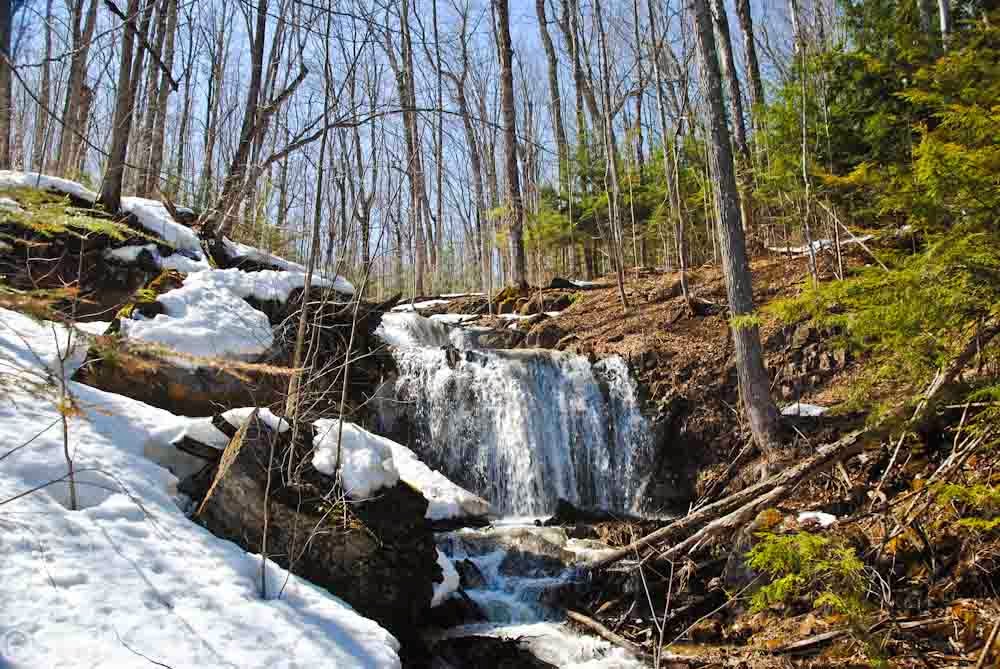 There are so many streams dropping over large and small waterfalls along the sides of the valley here that a large section of the Bruce Trail is locally known as the 'Falling Water Trail'. 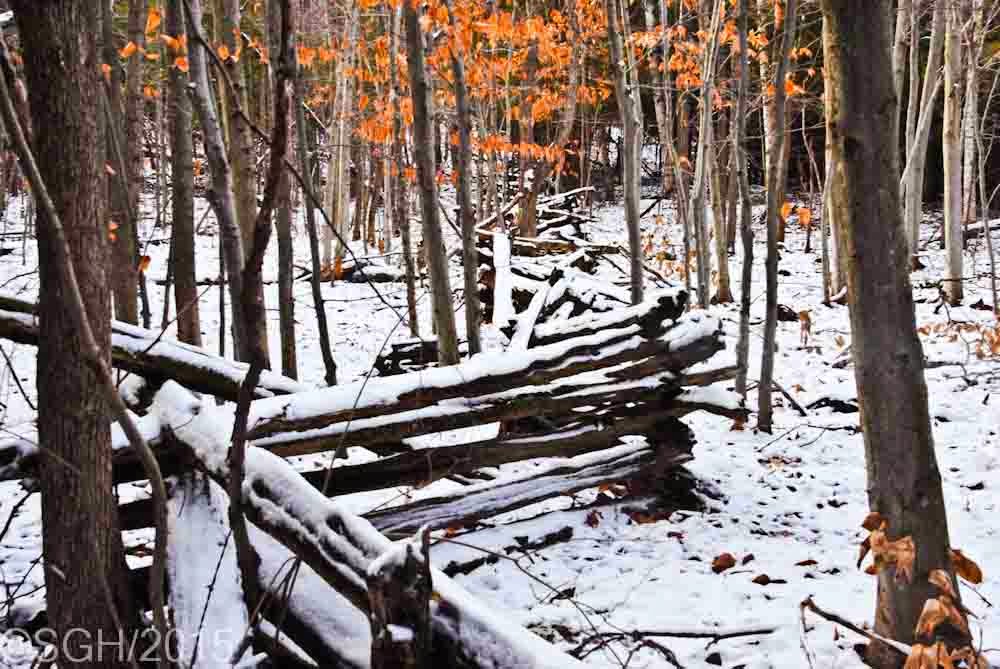 The lower slopes used to be farms, though never very prosperous ones I expect.  No farm in this part of the valley has sold to a farmer for a long time though; they all go to rural residents who just let the fields grow up in trees.  Given the steep slopes, probably a good idea.  It's not unusual to come across old fencelines like this one far back in the middle of the forest. 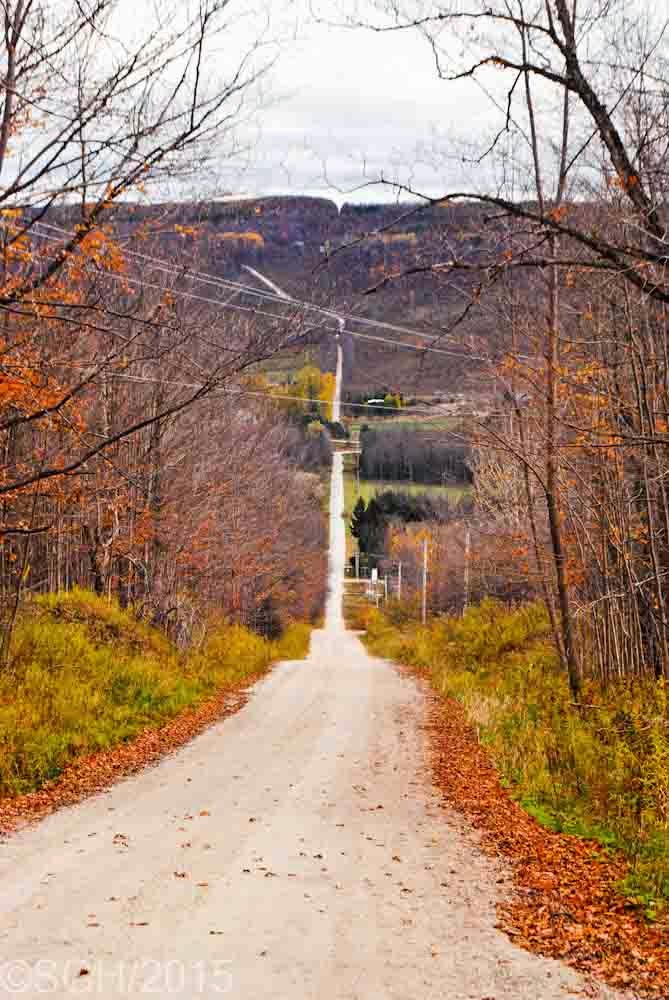 Few roads go down the slopes and across the valley here; this is one of only two.  Most either end abruptly at the top of the valley edge, or follow a long old dog's leg that a horse and buggy once managed, but a car certainly could not! 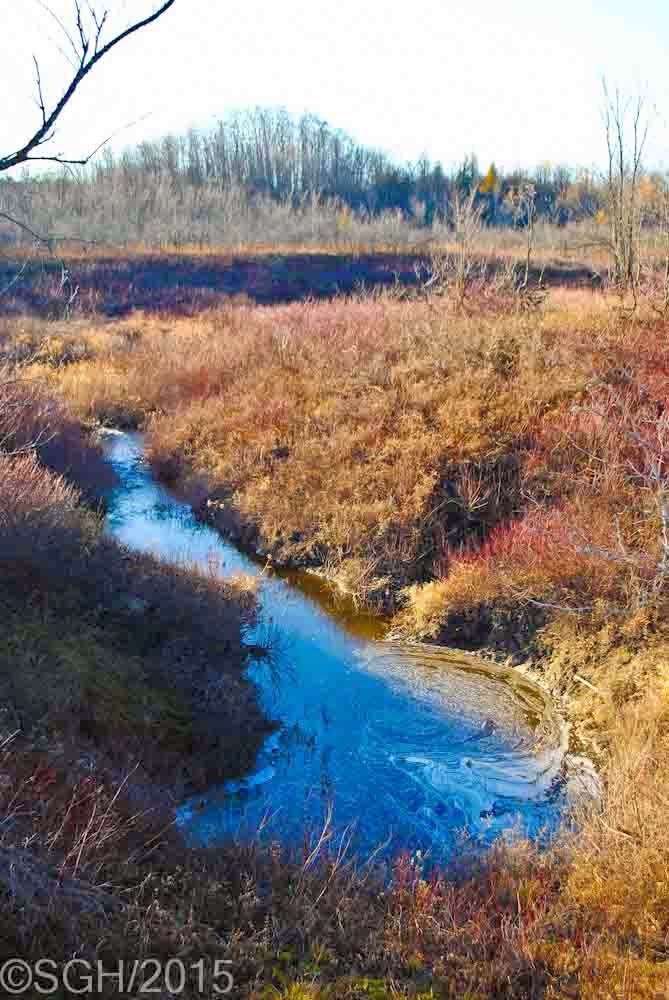 And there are karst sinkholes like this one, where the water above the valley drains directly into cracks in the limestone, emerging part way down the slope as a spring.  This is one of the valley stories that I find the most fascinating, and there will be a seperate post on that soon too.

In case you're wondering, the tooth (or the gap where it used to be) is fine.  But it was minus 20 here this morning, so winter's not leaving yet!  Don't know where those Robins we saw a few days ago are hiding!