Over the next couple of weeks I'm going to present you with a series of posts that aim to describe 'the valley' - that's the Beaver Valley, here where I do most of my exploring and photography.  I'm always fascinated to learn about the communities where other bloggers live, and I hope you'll be interested in reading a bit more coherent description of this place, while I wait for more signs of spring to appear here.  I'll be drawing on photos from all seasons over the past four years. 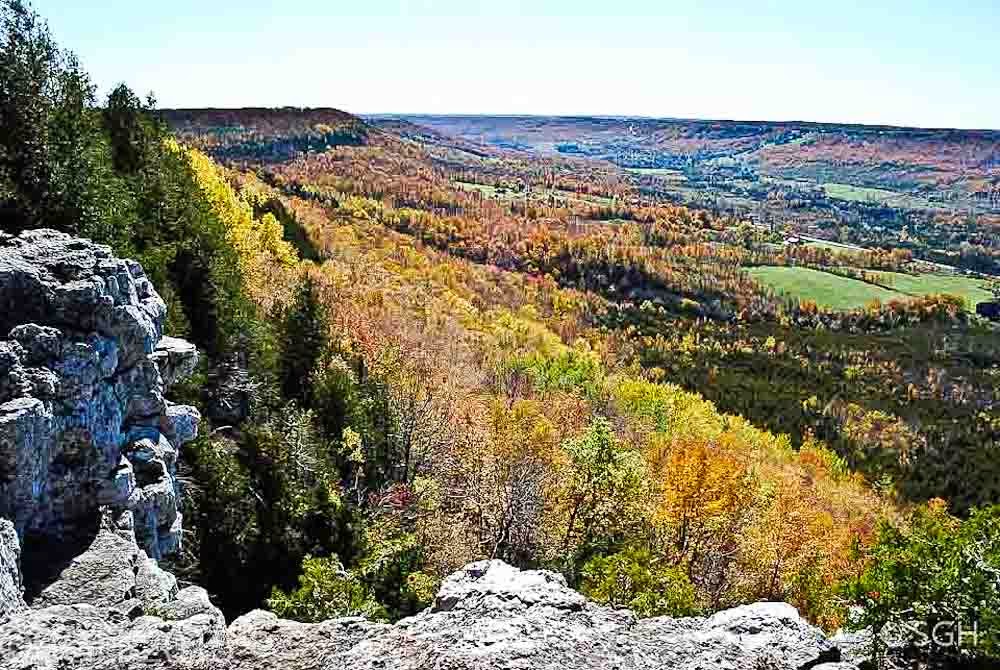 This is the valley as I think of it, the view looking south from the top of the cliffs at Old Baldy, a popular lookout along the Bruce Trail, and the most prominent cliffs in the area.  It's a classic 'U-shaped' glacial valley, relatively narrow, with steep slopes, making it one of the most scenic valleys along the entire Niagara Escarpment. 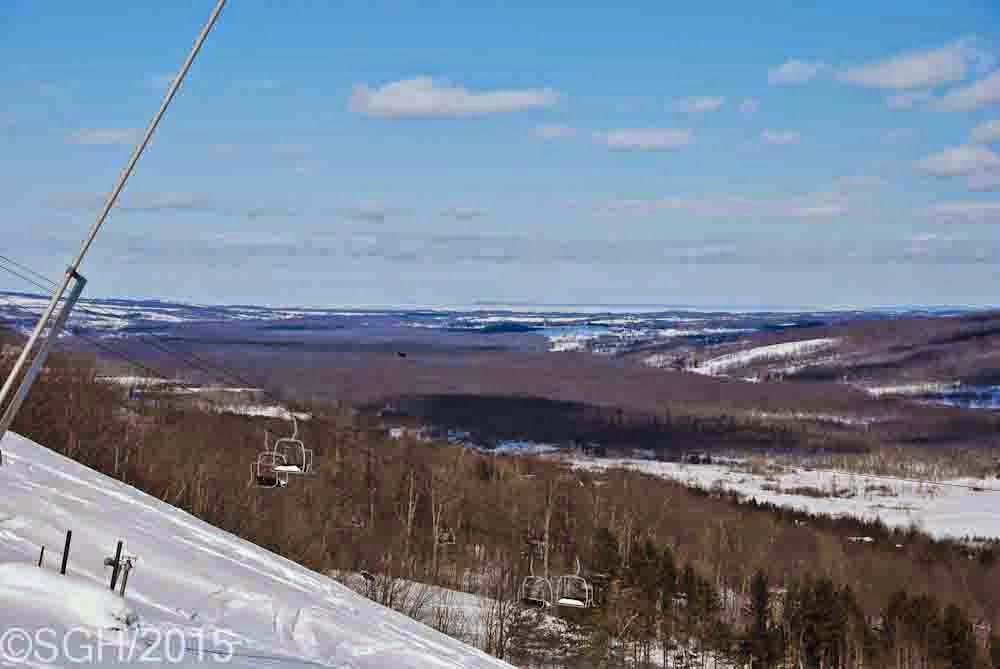 But when I think about describing the valley, it is much bigger than the narrow, scenic part where I live.  Moving north toward Georgian Bay (looking white in the distance), the valley opens out into a broader shallow valley with much gentler slopes, and a large flat forested swamp in the centre.  The Beaver River flows downstream through the middle of that swamp (a popular canoe route), and eventually empties into Georgian Bay about in the centre of this picture, taken 3 weeks ago from the top of the former Talisman Ski Resort. 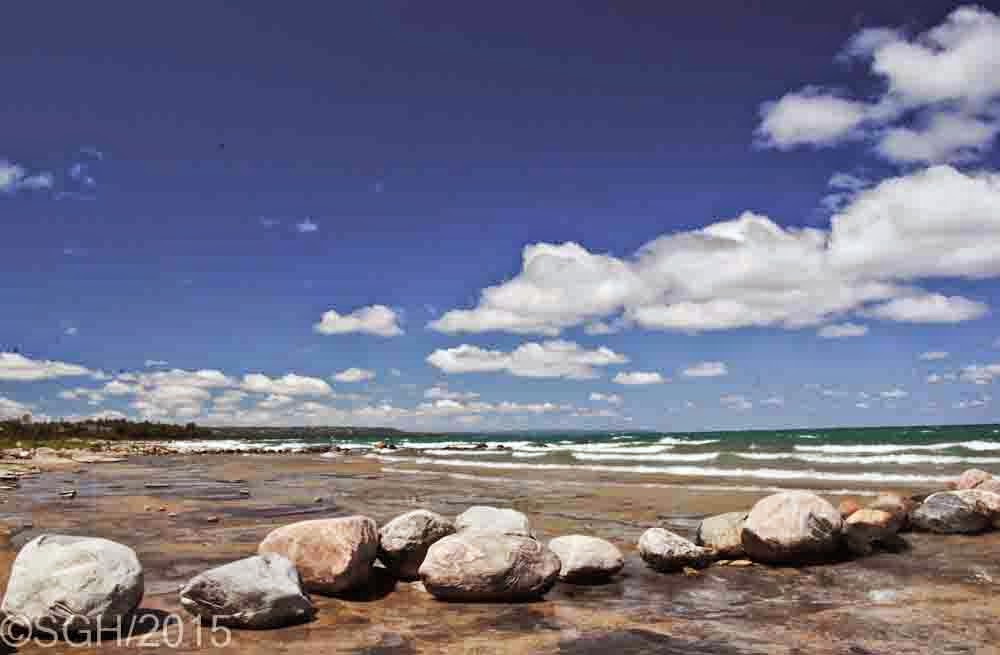 And Georgian Bay is a story of its own once you get there.  Often described as the '6th Great Lake', it's known for its crystal clear blue water, beautiful scenery, and lots of recreational communities around the hundreds of miles of shoreline.  Where the Beaver River empties into the bay in Thornbury is a very popular fishing spot. 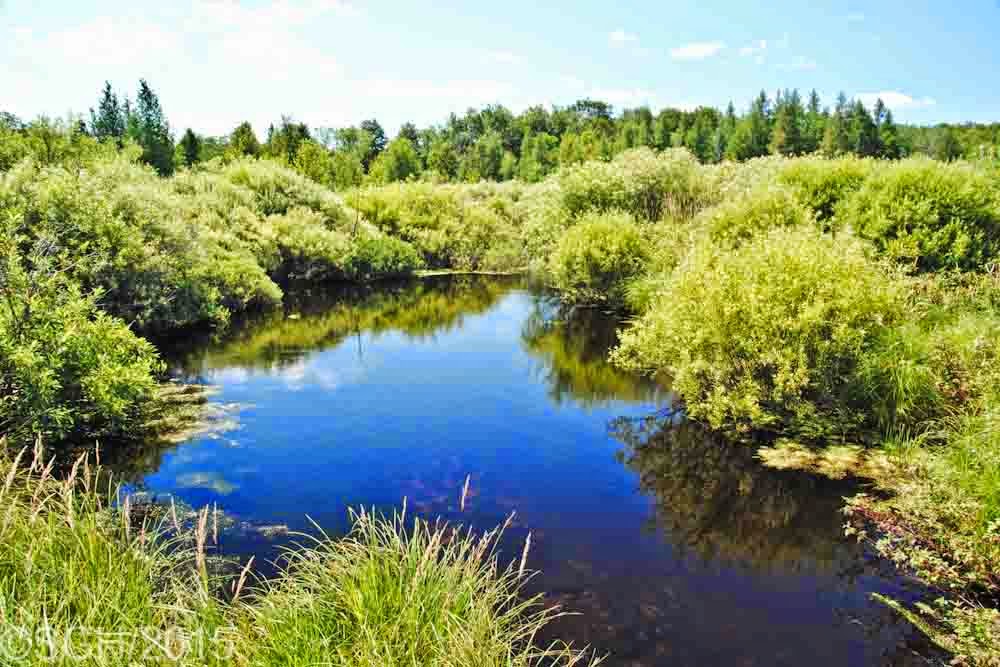 But if I'm going to describe the valley, I really need to include the upper watershed too.  Above the waterfalls that I've often posted pictures of, above the Niagara Escarpment slopes, the valley is much shallower, the creek running through rolling rural countryside.  Here the stream gets much narrower until it eventually peters out in various swamps and springs where it originates. 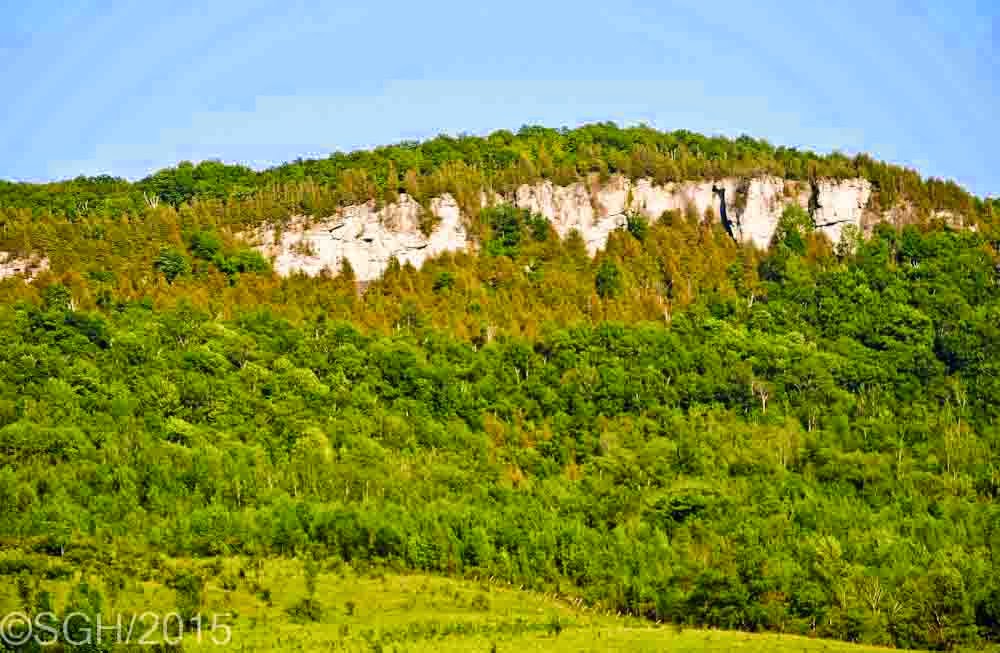 There are a lot interesting features here in the valley that attract my interest, and provide great places to explore.  The single most obvious feature of the Niagara Escarpment is the outcropping of cliff towering over the village of Kimberley, known as Old Baldy or Kimberley Rocks.  The Bruce Trail goes right along the top, providing spectacular views of the valley. 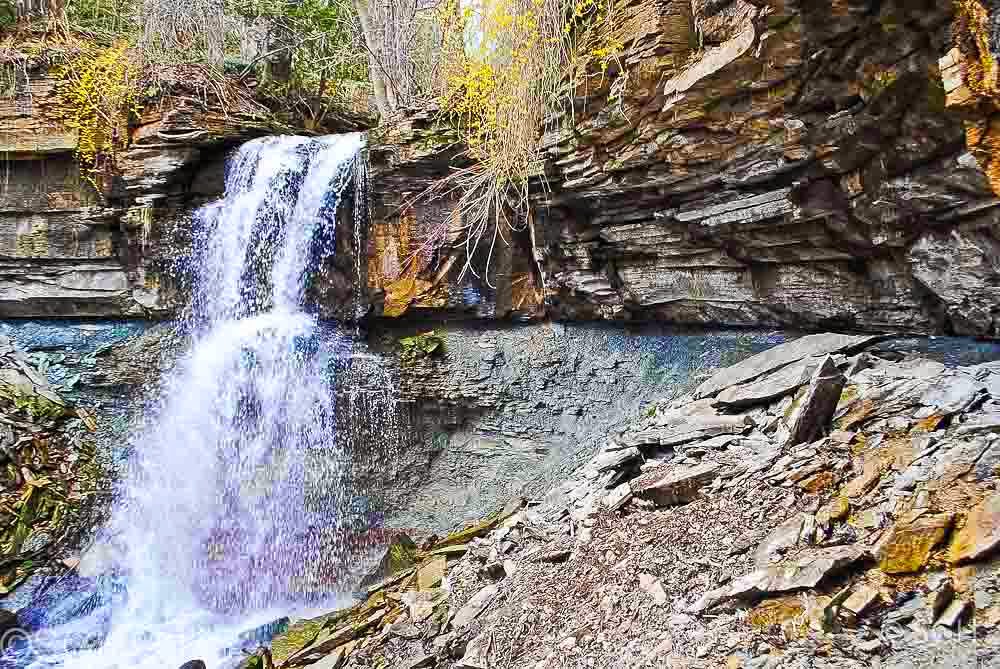 As you know if you've read this blog much, I'm personally intrigued with all the waterfalls - here Webwood Falls. And as you can tell from both pictures, the geology is an important part of the valley.  There are three medium size waterfalls, and numerous smaller ones, all of which mark the boundary between the watershed above and below the Niagara Escarpment. 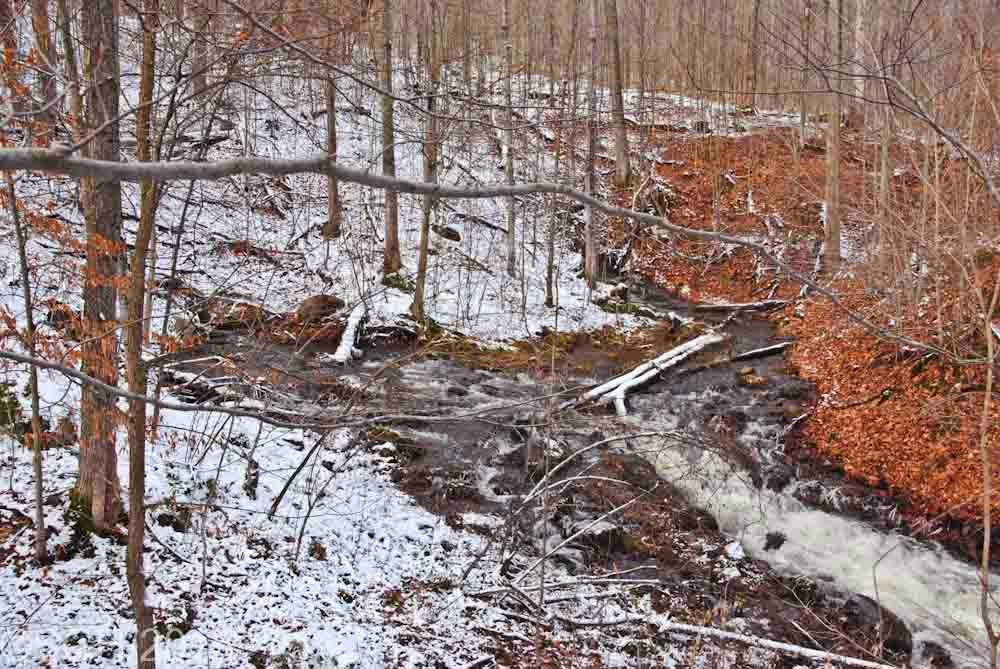 But because the top layer of that geology is limestone, there are many streams which do not flow over the escarpment at all, but disappear into sinkholes, reappearing as springs part way down the hill.  This is Kimberley Springs, on Wodehouse Creek, with one of the most interesting karst sinkhole complexes in the entire province. 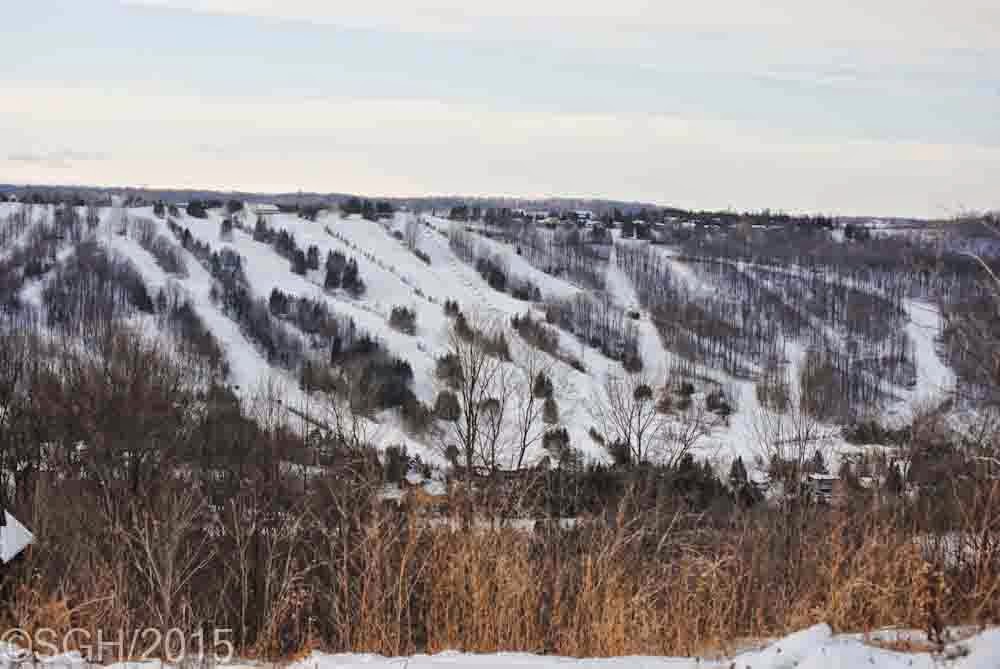 There's a lot I could say about the human use of the landscape in the valley too, including the downhill skiing that it's known for - here the Beaver Valley Ski Club.  I'll touch on both recreation and agriculture over the next few days. 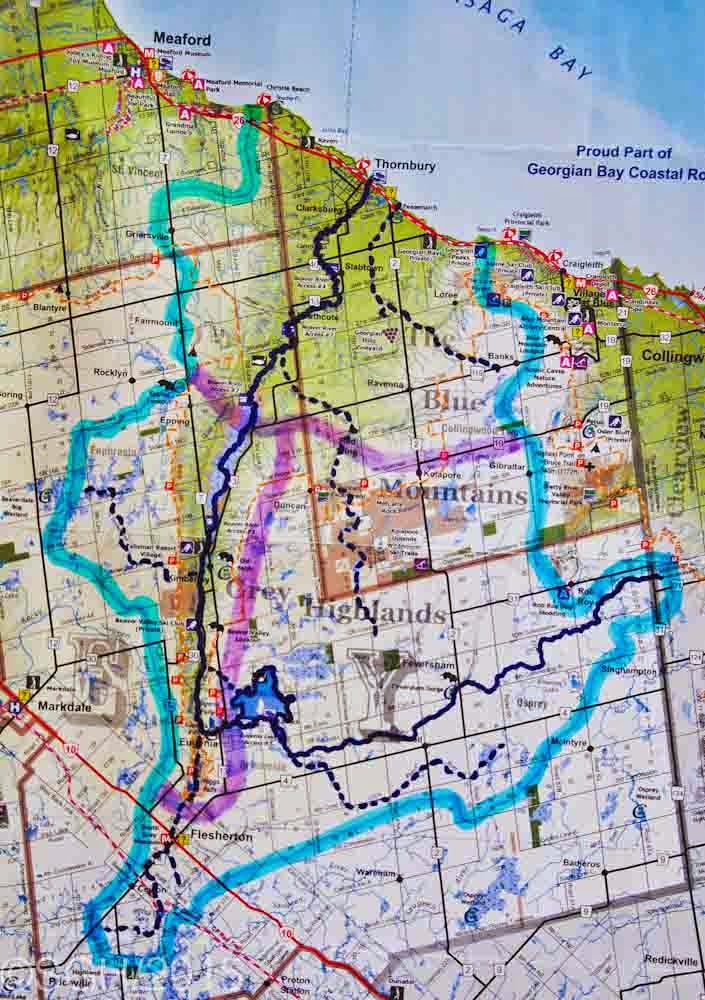 As you can see, the river actually drains westward first, passes through Lake Eugenia just northeast of Flesherton, and drops over Eugenia Falls.  Then we're in the narrow scenic part of the valley heading north, past the Ski Club, through the big swamp, and eventually reaching Georgian Bay at Thornbury.  The light purple lines are my version of dividing the valley into three regions - the upper watershed, the middlemost scenic part of the valley where we live, and the lower valley to the north.  Tomorrow I'll start taking a closer look at each of these three parts of the valley.
Posted by The Furry Gnome at 7:00 PM