The last of seven waterfalls I've visited the past two weeks was Indian Falls, just northwest of Owen Sound.  It is rapidly becoming my favourite!  I heard from someone else with a camera while at Inglis Falls that it was worth going to see, and wow, was it ever! 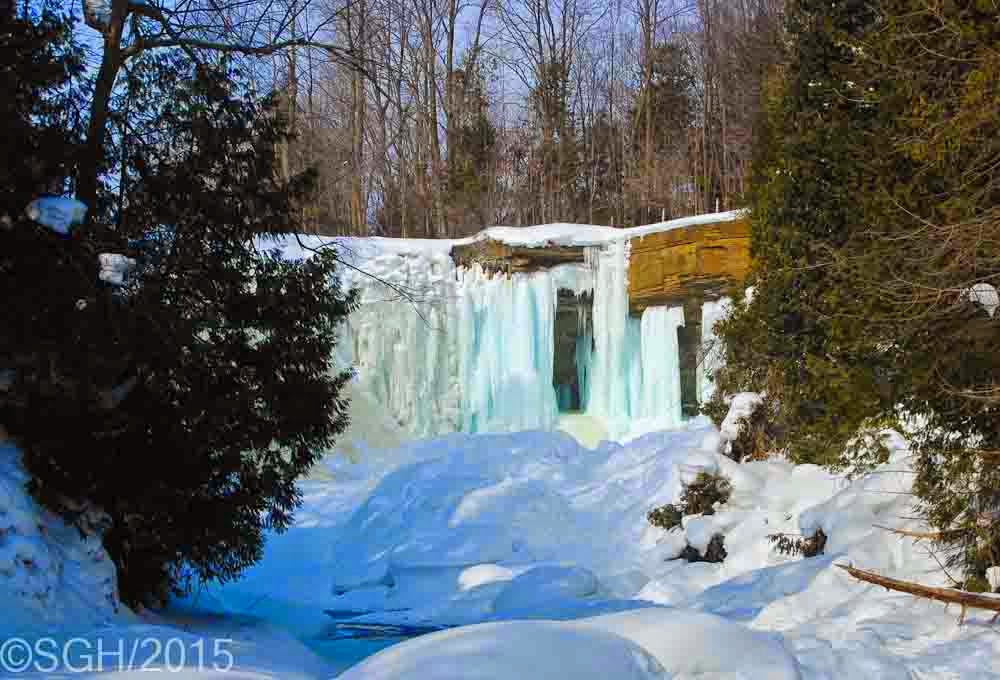 My smart co-explorer looked at the weather forecast, and suggested we go on Friday, which was a sunny day, with no weekend crowds.  It's about a 15 minute walk up the valley along the edge of the creek, or at some points right out on the ice.  As we got closer and came around the bend, this is what greeted us!  The first view was of incredible blue curtains of ice on the north side of the valley. 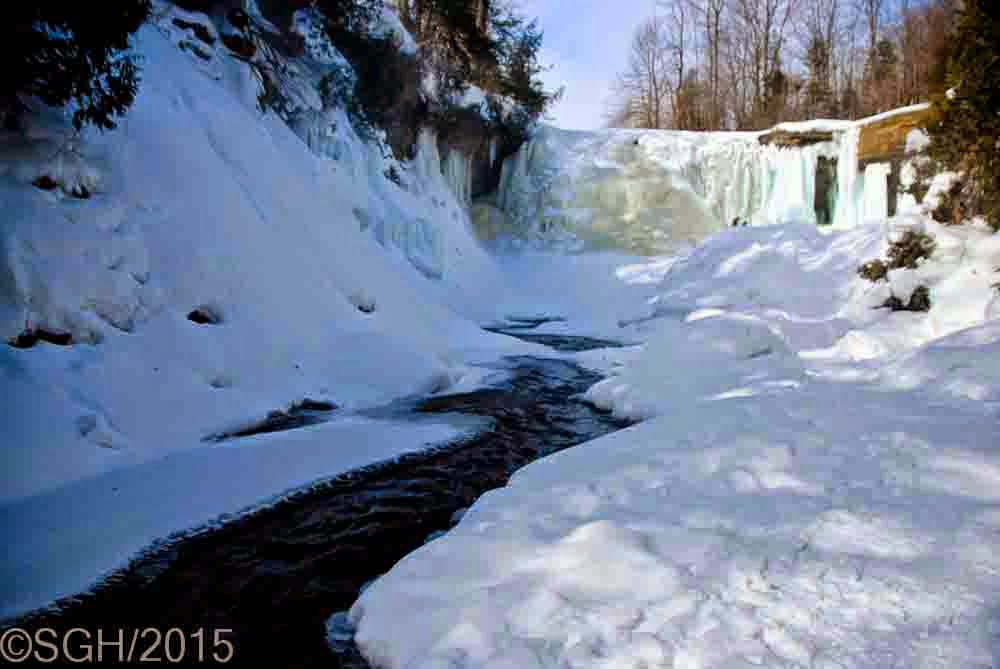 And a few steps further, past those cedars, and the view opened out to show us the whole waterfall, occupying the entire cliff at the head of the gorge.  The stream was open in a few places like this, but mostly frozen.  This week's warm weather may leave it unsafe to even try walking in here. 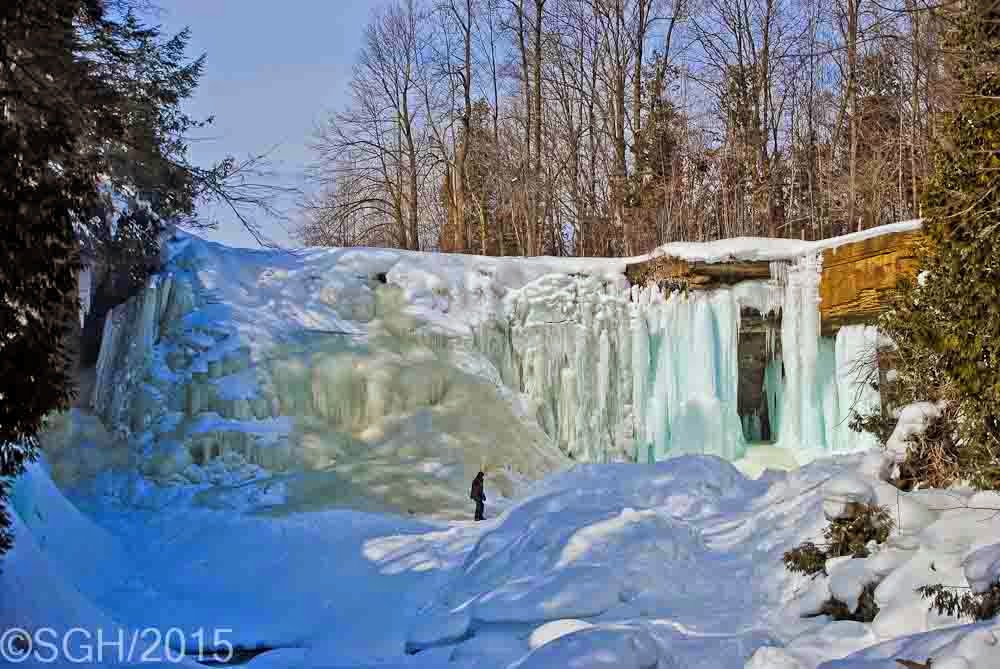 There was only one couple there when we arrived, and I got a good picture to show you the scale of the falls.  This falls is a straight vertical drop over the brow of the cliff, and the colours on this day were absolutely amazing. 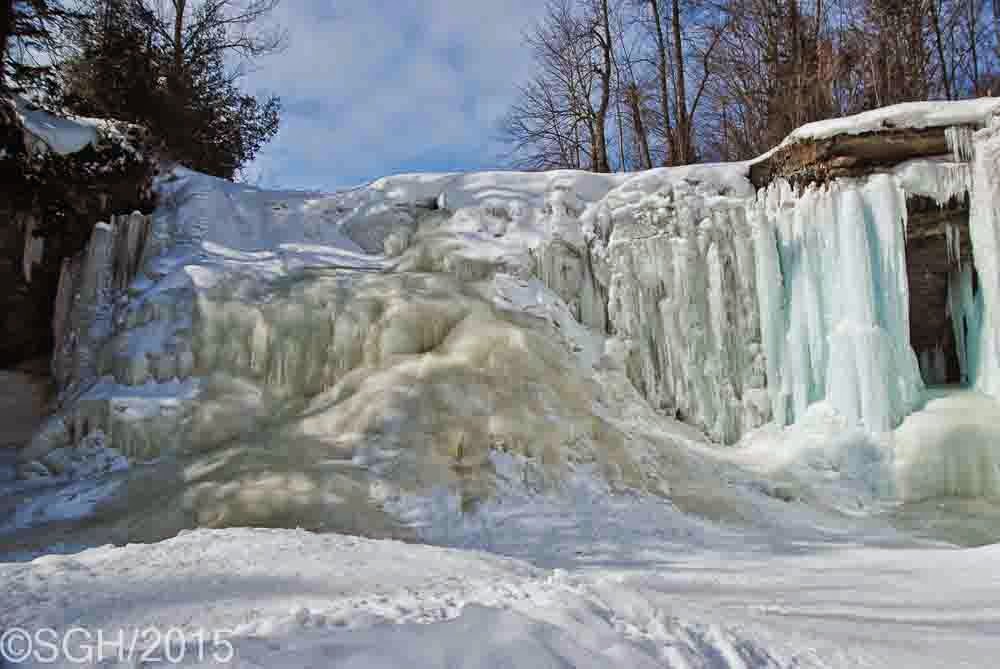 The south half of the falls was a huge lumpy mound of ice, with a slightly yellowy colour, where water had obviously been running over top from the main flow in the creek, and building up thicker and thicker ice.  To the right of that was a section of vertical ice formations, in icy white. 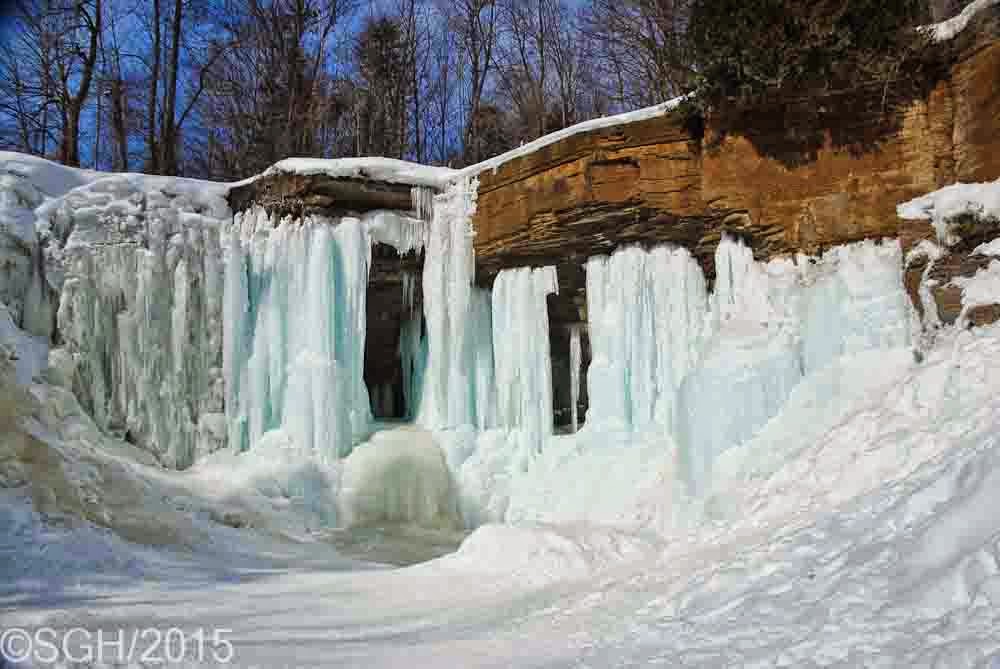 On the north side were the amazing blue curtains of ice, not formed by water running over the top, but by water dripping out between lower layers of limestone, forming huge icicles.  I've never seen anything like this before at any waterfall! 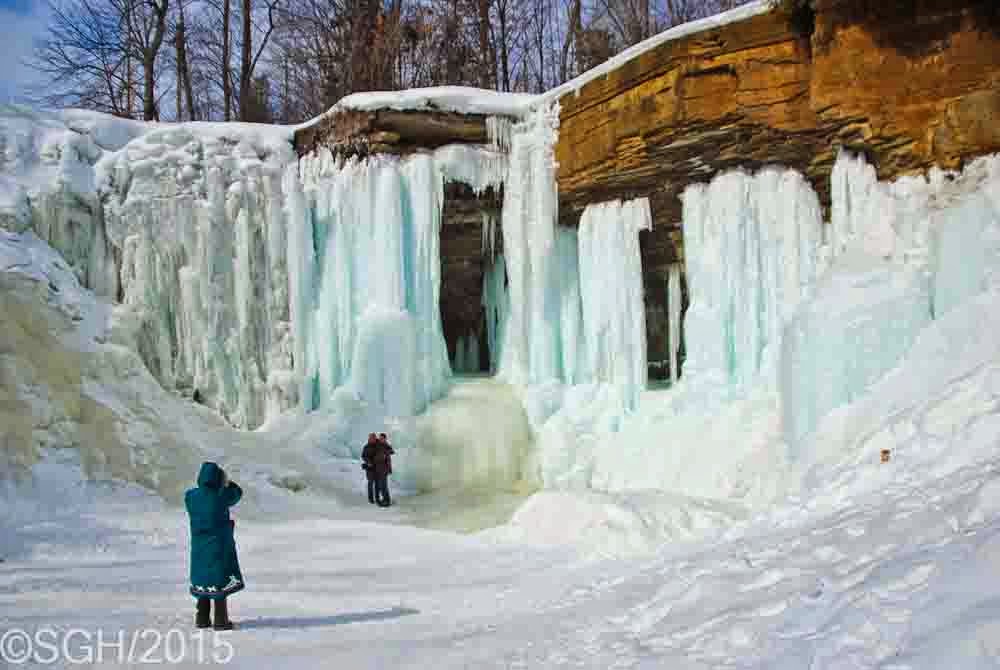 My wife is a frequent volunteer photographer for couples she sees on our travels, so here she is (dressed up warm in her Yukon parka), taking a picture of the one couple who arrived when we were there.  Tomorrow I'll show you some closer pictures of the ice formations. 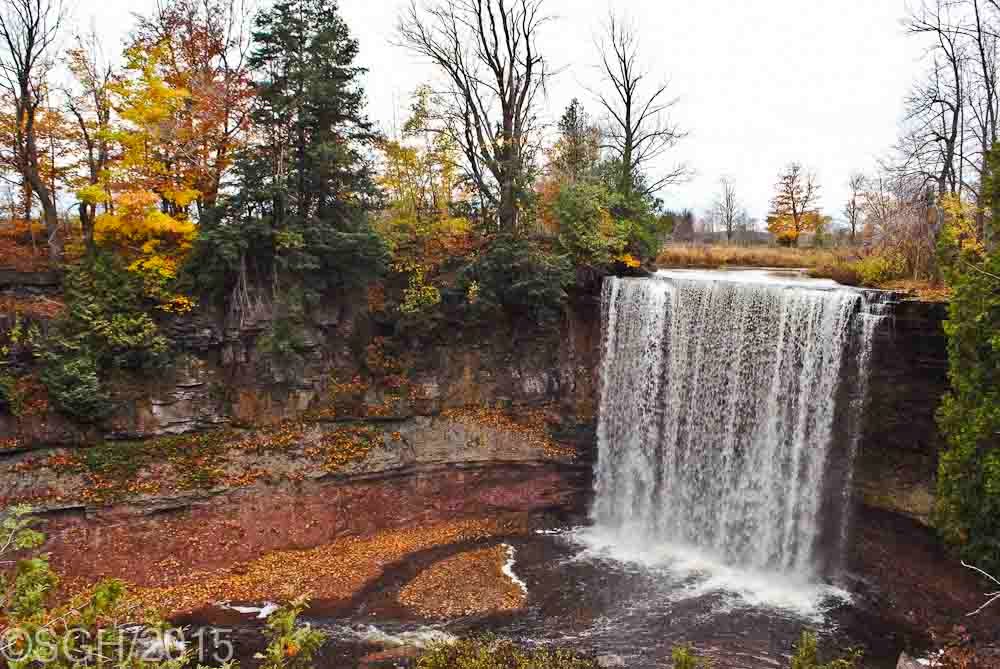 But for those of you who want the other seasonal view, I do have pictures of Indian Falls from late last October.  You can see the deep pool of water in the gorge, where we were standing on the ice. 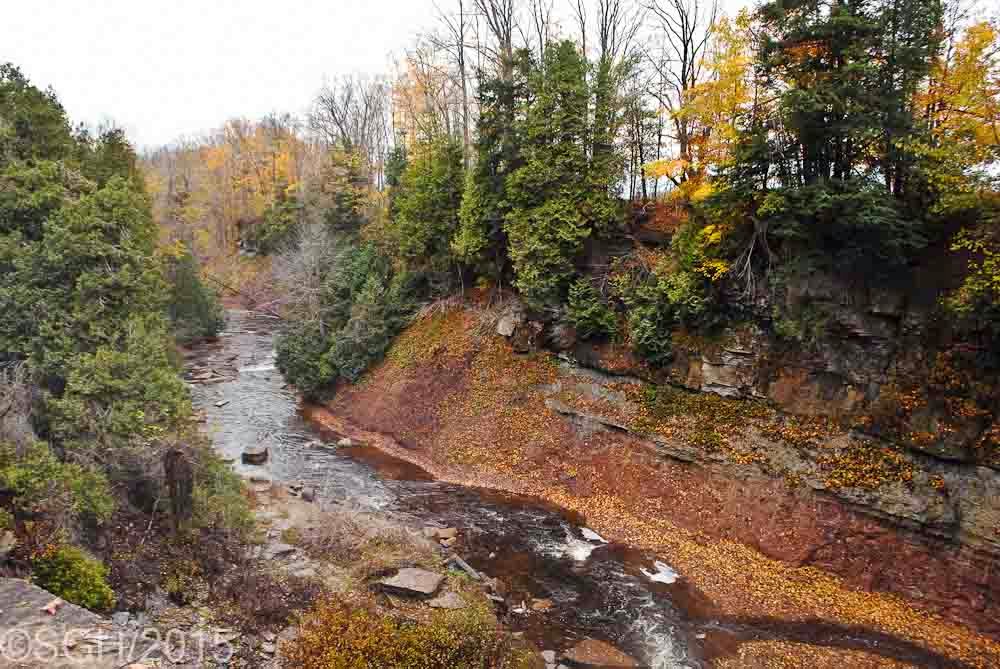 Indian Falls is a wonderful geology lesson, a classic example of a bowl-shaped vertical falls dropping over the Manitoulin Limestone formation (upper half of the cliff) and eroding through the blue and then red layers of the Queeston Shale below (bottom half), creating a deep and steep sided gorge. 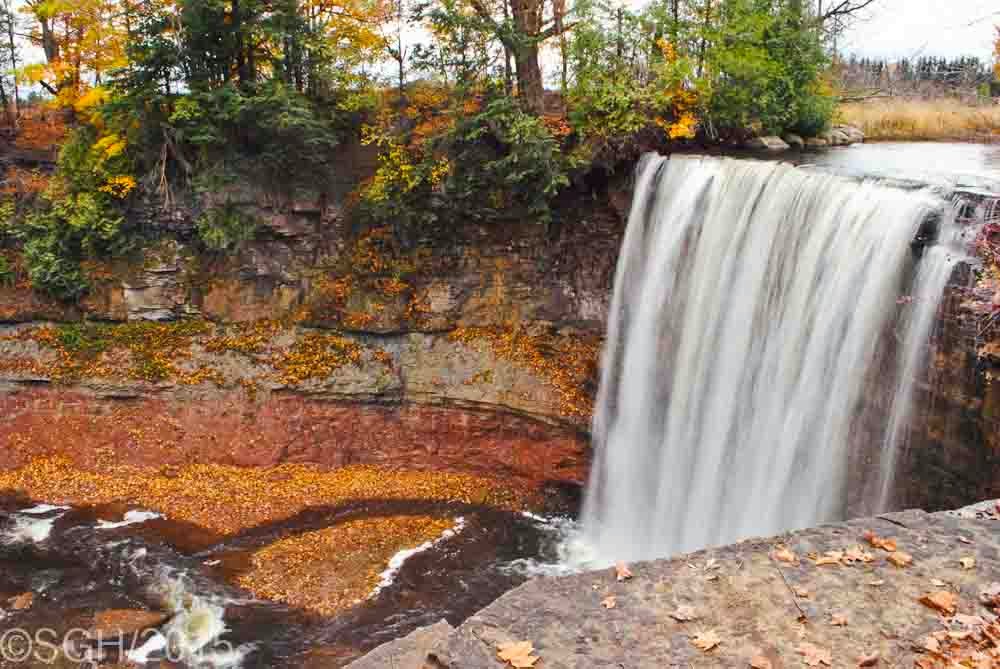 I did manage one of those 'slow-motion' pictures, without a tripod, last fall.  I must have leaned against a fencepost to get this picture at a slower speed.

Locals are giving credit to February's record-breaking excessively cold temperatures for this group of frozen waterfalls I've been visiting, including this one.  Who knows when this will happen again?  Today on the other hand, felt like spring, well above freezing for the first time in 8 weeks, bright and sunny.  It's suddenly a different world.