Today, Sept. 30th is Orange Shirt Day here in Canada, a day to remind ourselves of the suffering experienced by indigenous children who attended residential schools.  Following the passage of the Indian Act in 1876, residential schools developed across Canada, designed to remove Indian children from their homes and assimilate them into the dominant Canadian culture, in words of the time, "to kill the Indian in the child".  Legislation in 1894 made it compulsory for all native children to attend these schools. 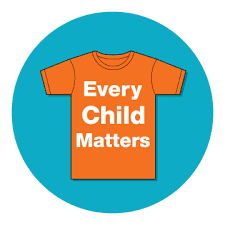 The residential schools were mainly run by churches.  They were residential boarding schools, and the children were often treated harshly, sometimes abused.  Of 150,000 who attended over the years, about 6000 died, but often families were not even told, and burial locations remain uncertain.  Children were not allowed to speak their native languages.  The forcible removal of children from families on isolated reserves tore families apart.

This entire horrible episode in Canadian history was the focus of the Truth and Reconciliation Commission, who wrote a report in 2015 outlining 94 calls to action.  The commission concluded, among other things, that children were usually acculturated enough that they no longer fit in their native communities back home, but sadly they also did not fit in mainstream Canadian society, facing a life of racial prejudice.

The result was often post-traumatic stress disorder, leading to alcoholism, drug addiction and an epidemic of suicide, all of which continue today through generations of families who suffered through the system.  It didn't end until 1896.

Our son saw this for himself when he went to school in Thunder Bay and worked in Kenora for two seasons, both home to many natives.  He worked as a pilot for a reserve community for a summer, flying residents out to traplines and favourite fishing spots, or out to larger centres,  The nurse, the teacher and the pilot were the only white faces in the community.  Later, flying for the native-owned Wasaya airline,  he flew freight into the isolated northern reserves, up to Hudson Bay, which didn't have road access.

Where does the Orange Shirt come from?  The idea came from Phyllis Webstad, of Williams Lake in B.C., who told the story of how her grandmother who raised her bought a special new orange shirt for her first day going away to school.  When she arrived she was stripped of the shirt and never saw it again.  It has evolved into a nationally remembered day across Canada and many children will be wearing orange shirts today.

Here in Meaford the nearest memorial to the residential school system and other injustices indigenous communities have suffered is the Wiidosendiwag-Walking Together Tour that was developed in Owen Sound to take walkers past the site of an ancient Nawash village and two burial sites on the west side of the harbour, at the mouth of the Pottawatomi River.  That initiative was headed by the Truth and Reconciliation Circle at First United Church, together with representatives of the Saugeen First Nation and the Neyaashiinigmiing Chippewas of Nawash.  I hope to get to see at least part of it some day.

So I challenge you to learn a little bit more about the challenges indigenous communities have faced, and indeed simply to learn where these communities are located, especially if it's near you.  There are lots of resources online and at museums which are increasingly portraying a balanced view of this history.

Sorry I can't give you the links; I haven't figured out how to do that n the new Blogger format.  Google the two highlighted titles above to find starting points.