Yesterday was a beautiful sunny warm day, so after church (properly distanced and masked of course) we headed out for a drive.  After picking up a sandwich for lunch we drove straight south down into the valley, and our first stop was the John Muir Lookout.  I get the impression that many don't realize that John Muir, the great conservationist, father of the American Nation Parks system, spent most of two years here in the Beaver and Bighead Valleys. 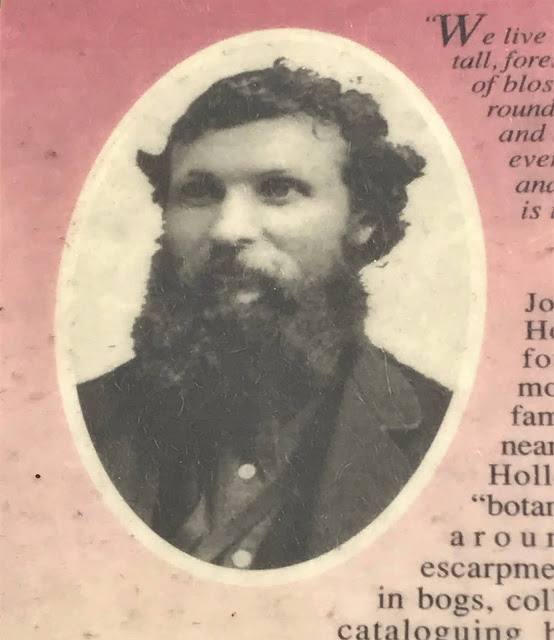 There's an interesting information plaque that provides an overview of Muir's time here.  The knowledge has come to light from his diaries, from letters he wrote, and from plant specimens he collected (which recorded locations).

The plaque features this quote, which captures the essence of Muir's love of nature, an almost rapturous delight.  It's hard to believe this was written about the setting of a sawmill on the Bighead River (where he worked in between rambles) but could equally be written about the western mountains. 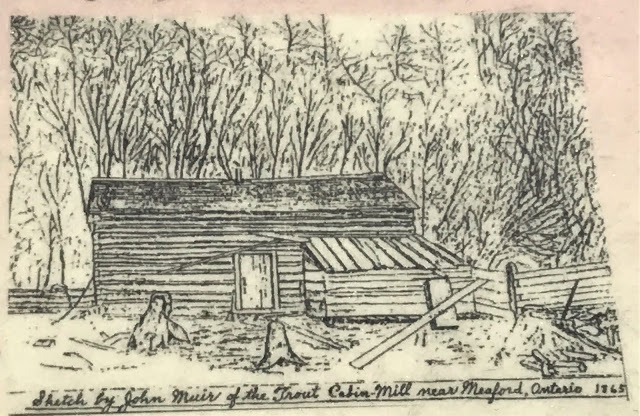 This is Muir's sketch of the cabin he lived in with others at the Trout Hollow Sawmill, now the focus of its own walking trail. 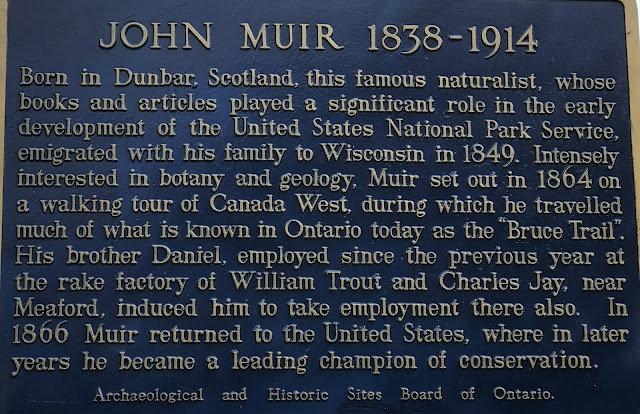 Here is the story in a nutshell, on the historic plaque at the lookout. 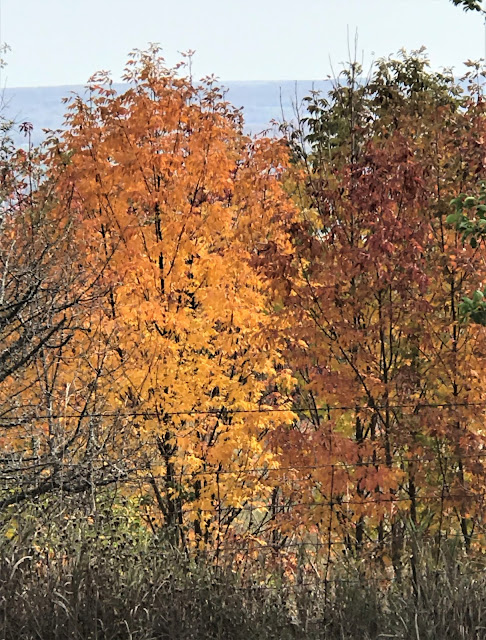 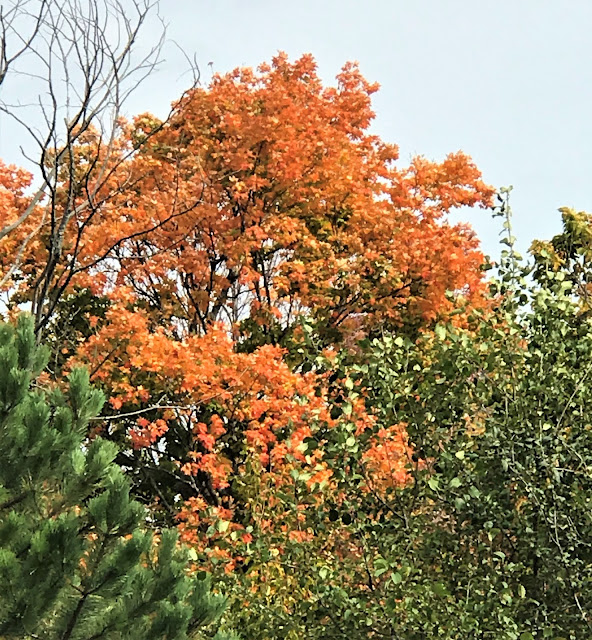 There were certainly a couple of pretty trees nearby, already decorated in their fall colours.

But as a lookout over the valley, the place has its shortcomings, because the trees beyond the fence keep growing! 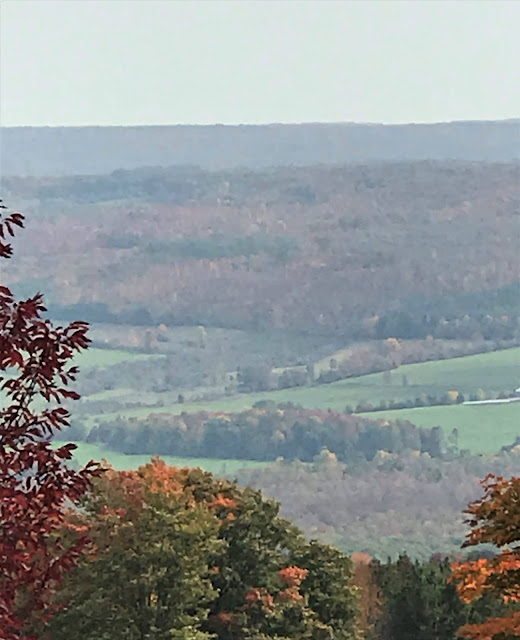 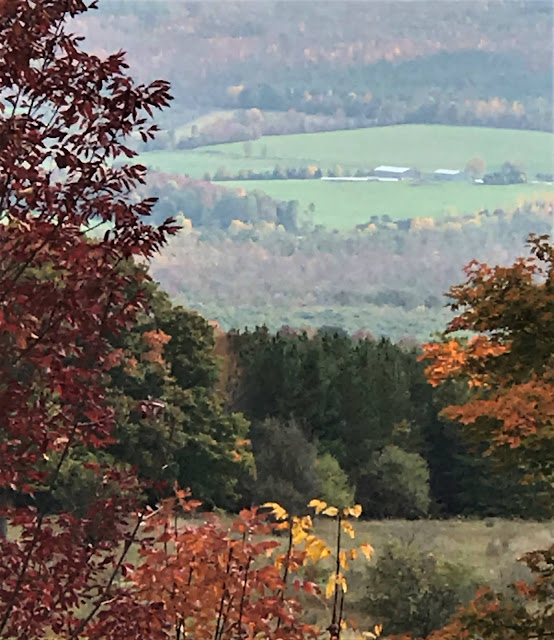 It took Mrs. F.G. wandering down to the fenceline to peak through at a nice view. 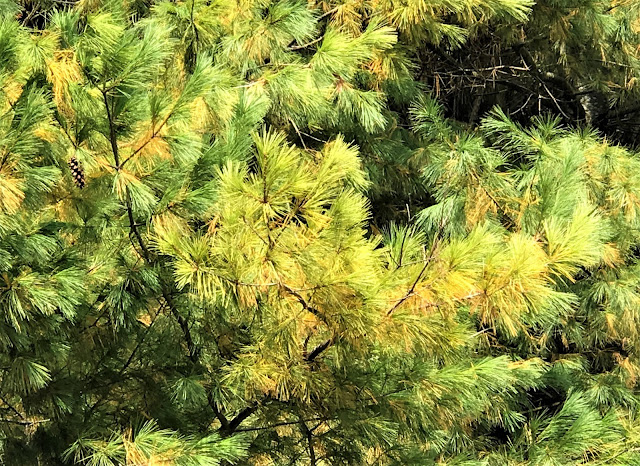 The tiny conservation parkette was bordered by White Pine.  Many don't realize that they lose their needles too - but every 16 months rather than annually.  Looking closely you'd see that none of this year's growth has turned yellow, but last year's needles have.  That's hoiw a pine plantation get carpeted with needles. 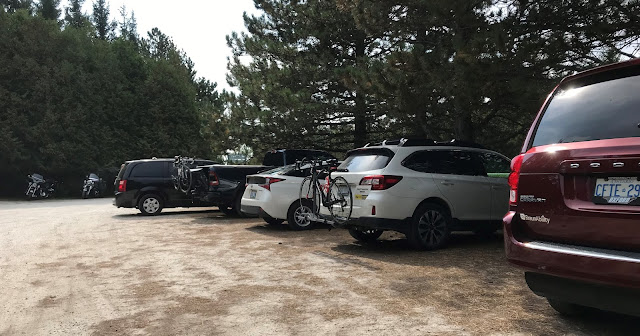 But what shocked us was the number of cars, about 12 plus 8 motorcycles, in a tiny spot where you'd be lucky to see 2 vehicles almost any other day of the year. 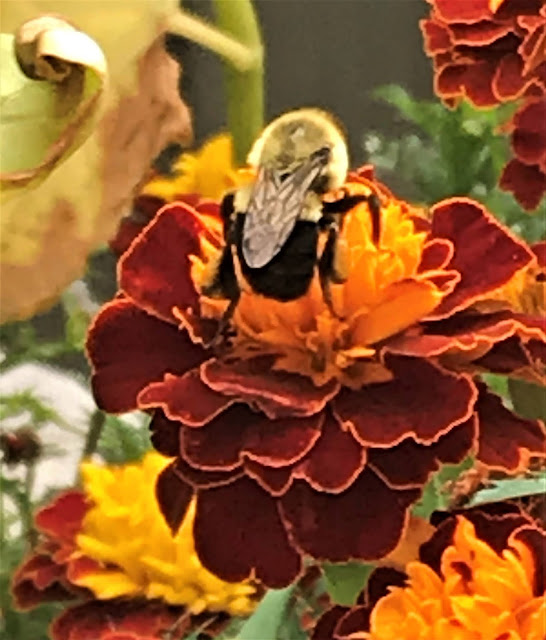 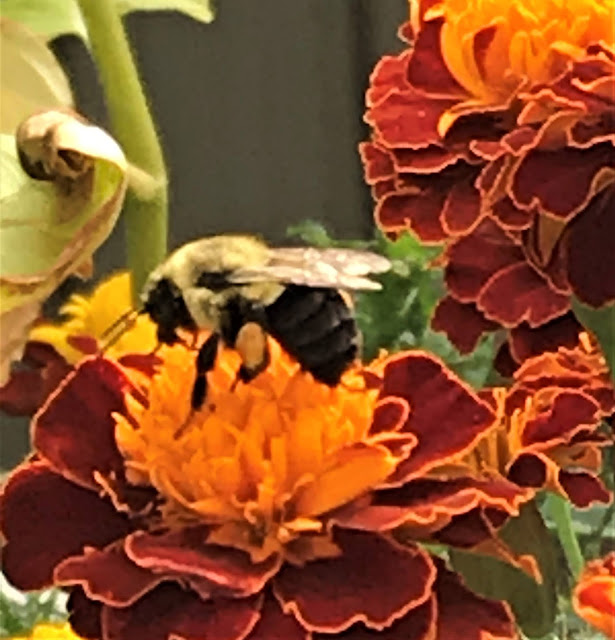 Later on, just as I was sitting at the spot, this bumblebee came to get some late pollen.  An iphone close-up, but not too bad.
'Citiots' - we find ourselves almost constantly complaining about the urbanites from the Greater Toronto Area (GTA) who come to visit, especially on weekends.  Ordinarily tourists are a good thing, but with the threat of covid transmission, we have an instinctive reaction against them,  Most of Ontario's cased are in Toronto and a few other urban centres, and we here in Grey County still have very few.
So seeing crowds of cars at spots where we'd normally be almost alone is aggravating.  On top of that, a significant number of ski chalet or cottage owners have apparently decided just to stay for the winter.  Two small schools that we know of each suddenly have 100 extra students this year.  We can't park at our favourite farm store.  It's hard to make a left turn onto the highway.  And house prices are through the roof!
I'm ashamed to admit it, but I find myself frequently saying that 'they should just build a wall around the GTA and keep all the citiots inside!!!'