The easily visible rock layers of the Niagara Gorge have been one of the most studied geological sites on the continent.  When geologists are trying to sort out all those layers, what better place than where all those layers are exposed for everyone to see?

The challenge of labelling the geological layers here is that so many geologists have studied it, and since they all want to re-interpret things, they have labelled many layers, giving a quite complex description.  But you can see some obvious differences even if you're not a geologist and I'm going to stick to the simple version! 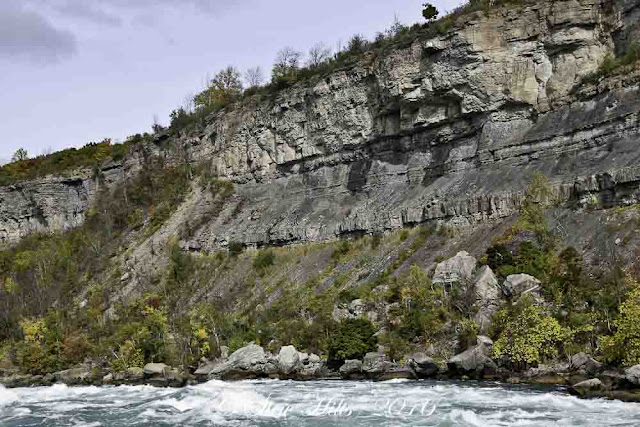 In this closer view you can easily see four obvious layers from the top down.  The top hard dolomite that forms a vertical cliff, or even an overhang, comes first.  Underneath that are some thinner layers and a slanted layer that is obviously softer and erodes more easily - that's a shale.  Below that is a short hard vertical section of dolostone again, followed by another softer shale down to the river, though it's partly covered by boulders that have fallen down.

The entire gorge here is about 175 feet deep, so the top layer is probably 50 feet thick, the next softer layer the same, the 2nd short vertical layer only about 15 feet, and the bottom slanted layer 60 - 75.  Look up the stratigraphic layers and you'll find a lot more layers labelled, but the main four are enough for me. 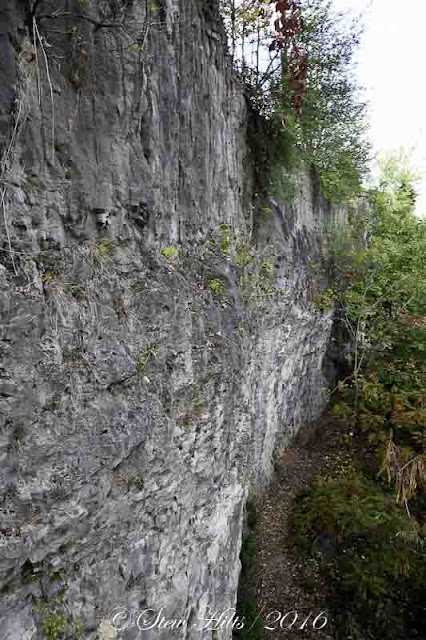 The top layer (this is on the Canadian side), is the Lockport Dolomite, a very hard rock that forms a vertical cliff. 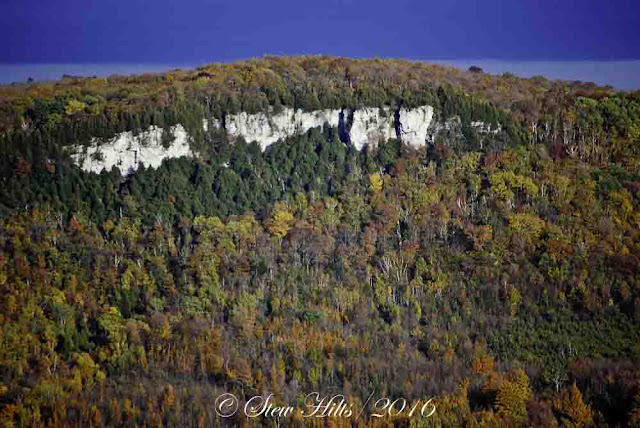 Here in the valley that layer forms the cliffs of Old Baldy, and is known as the Amabel Formation.  Regardless of name, this layer is the remains of ancient coral reefs, like today's Great Barrier Reef, that circled the Michigan Basin 400+ million years ago. 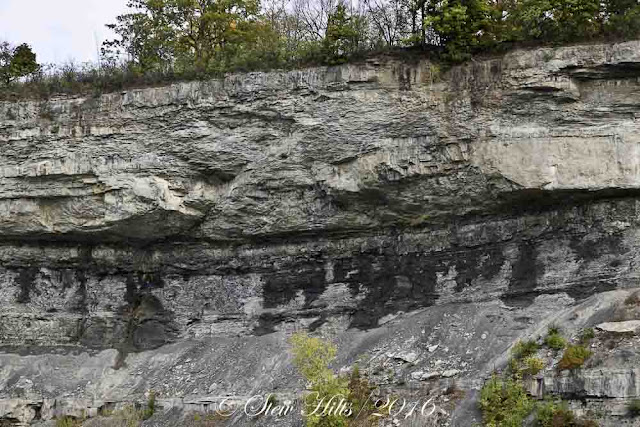 The next layer down consists of thinner layers of sandstone and shale.  These erode more easily, and here form a slanted scree slope.  But shale, being compressed clay, does not allow water to percolate through, so water is forced to move horizontally across the top, emerging as springs along the Niagara Escarpment.  These water stains make that very clear in looking at this cliff. 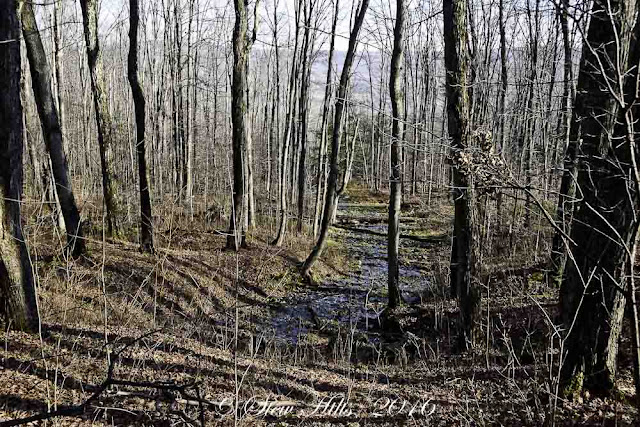 I don't have a picture of that geological formation in the valley; it rarely outcrops here.  But this is one of many springs that result from that layer, a small stream that drains down into the Beaver River. 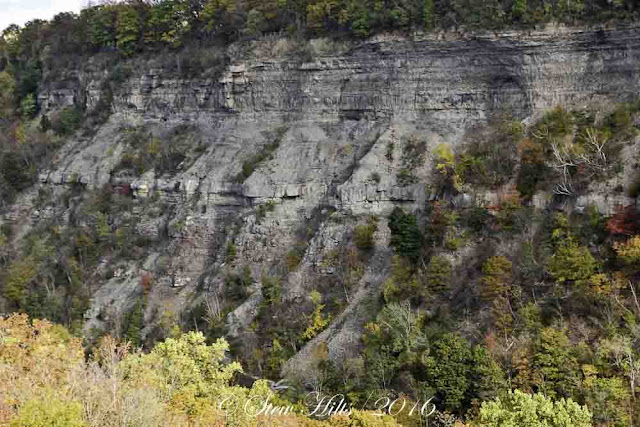 The next layer down is that short vertical dolostone layer in the middle of the cliff.  Although it's a short layer, it makes a big difference, because it forms a short cliff. 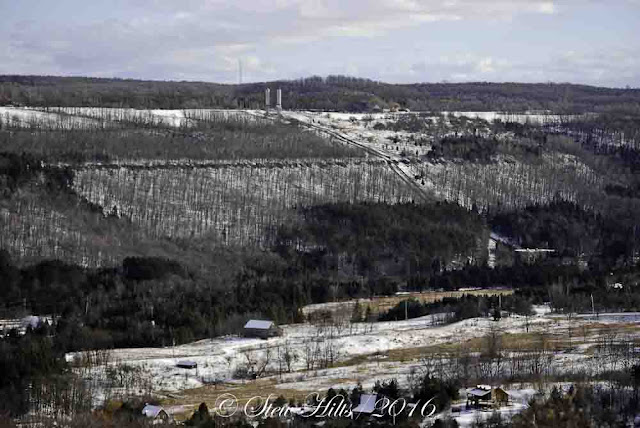 The thin flat line crossing the east side of the valley here about 2/3 of the way up the hill, is the same formation.  Here in the valley it's labelled the Manitoulin Formation, and it forms a secondary cliff, much smaller than Old Baldy, and perfectly flat because it was formed differently.  As you can see, the sections above and below it are quite slanted, just as in the Niagara Gorge.  (The gorge is much steeper simply because it's constantly being eroded at the bottom). 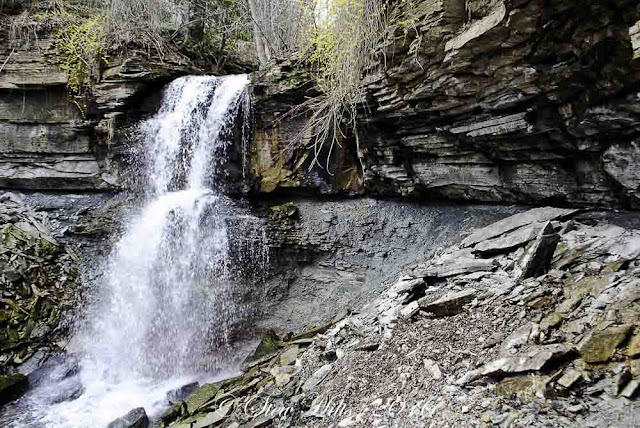 Here's a closer view of the Manitoulin Formation, where it forms the top half of Webwood Falls in the valley.  You can clearly see how it's composed of thin flat layers of dolostone.  Beneath it is the easily eroded shale layer known as Queenston Shale, usually showing up in bluish or reddish colours, both of which you can see here.

If you look at the entire cliff, all the layers below that top hard layer of Lockport Dolomite are formed as part of the delta of the Taconic Mountains to the east, 440+ million years ago.  The Taconics were the predecessors of today's Appalachians, and are thought to have been twice as high as today's Himalayas.  They formed an immense delta of sediments eroded to the west, as far as Chicago and the west side of Lake Michigan (and across all of southern Ontario).  The entire lower 3/4 of this cliff consists of layers of muds, sands and lime deposits of that delta (that's why they're always so flat).

All in all I've managed to make sense of the geology of the gorge for me, but translated it in my own mind into the geology of the Beaver Valley.  I'm satisfied that my simple understanding is enough!
Posted by The Furry Gnome at 8:43 PM