Slowly catching up on our hikes over the past month, it was Nov. 3rd when we did this hike, down the east side at the very south end of the valley, ending up at Hogg's Falls.  Perhaps you'd like to see a map. 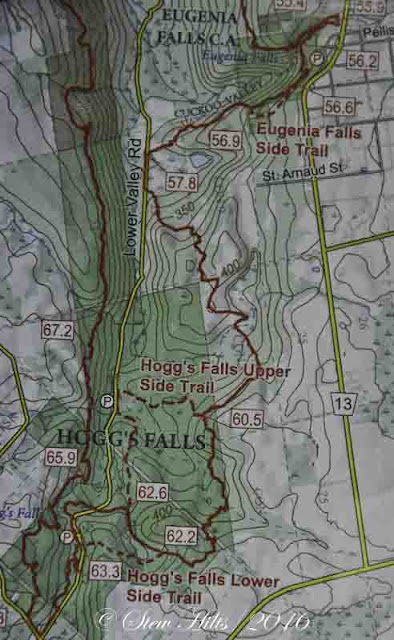 This is the narrow southern end of the Beaver Valley, the red line the Bruce Trail, and the village of Eugenia, with Eugenia Falls, at the upper right.  We hiked from the spot where the trail is on the road briefly to avoid a wetland at km. 57.8, up over the hills on the right hand side of the map down to Hogg's Falls, where the small 'P' is at km. 63.3.  If you know anything about contour lines on maps, you'll recognize that this section of trail is very hilly!  I've already reported on our hike down the west side of the valley where the trail is much less hilly. 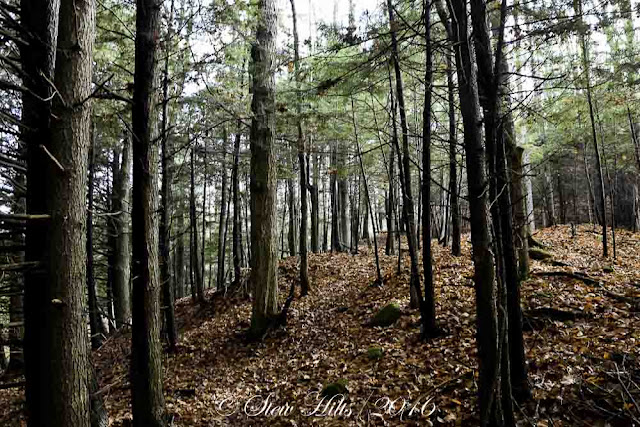 We entered a woods with a lot of Eastern Hemlock, on the Lower Valley Road Nature Reserve, which has recently been purchased by the Bruce Trail Conservancy.  It was a long steady climb uphill, through a beautiful woods. 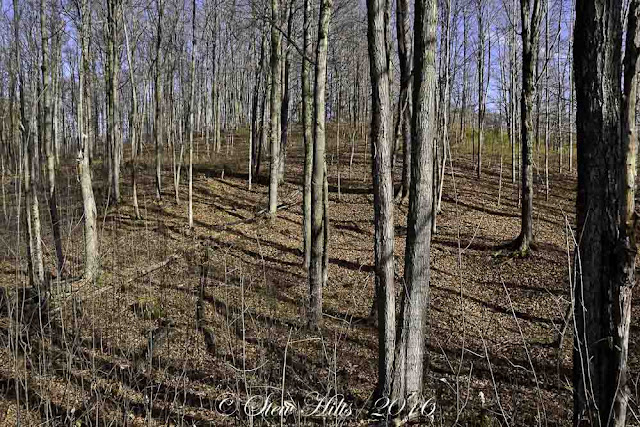 The leaves were down by now, and you could easily see through the woods.  There is enough continuous forest here that there have been reliable reports of Cougar and Cougar tracks in the area. 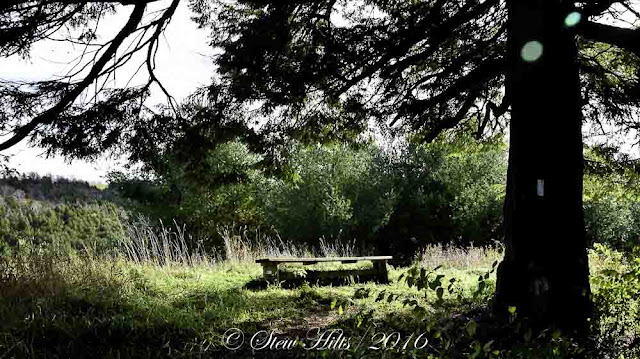 This was one bench I was glad to see, after that long uphill climb, out into a reforested area that used to be pasture.  A big old Hemlock overlooking the valley. 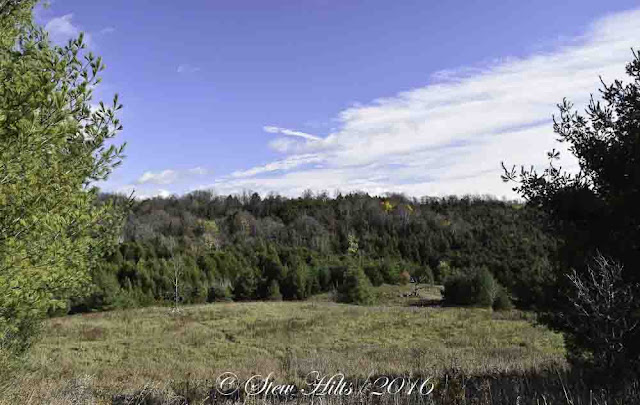 Surprisingly, this is the view east; the main valley is behind me.  The pattern of glacial deposits and erosion is so complex here that you have smaller inner valleys outside the main valley, as you can see on the map above. 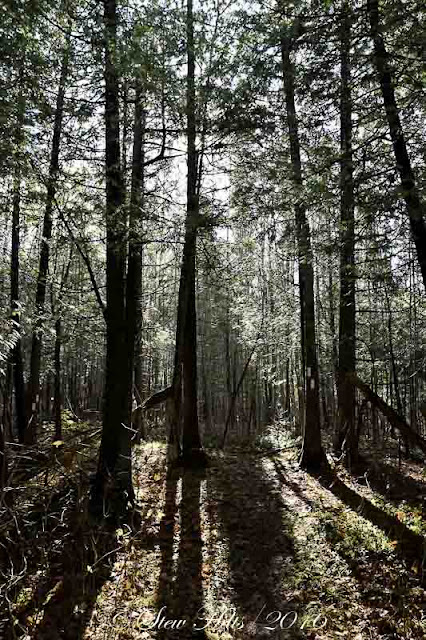 There were a lot of beautiful views through the trees, often straight into the sun. 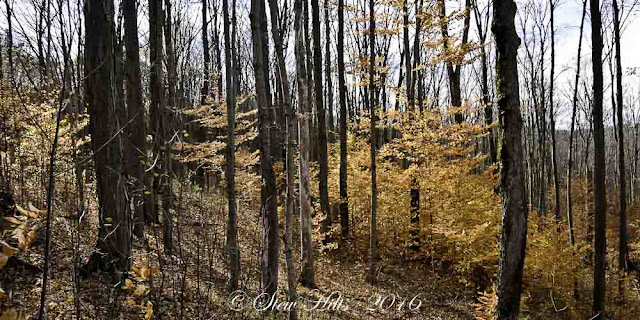 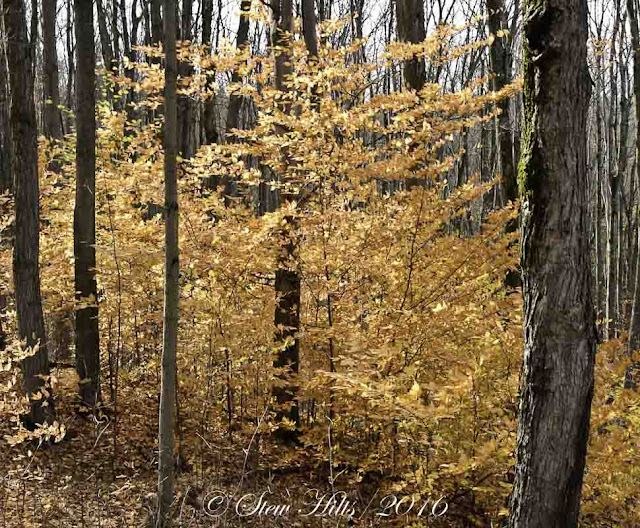 We came upon one grove of Beech saplings that was stunning in the afternoon sun!  Beech saplings like this usually grow directly from the roots of a big old Beech tree.  I learned that when I once tried to dig up a sapling to transplant it. 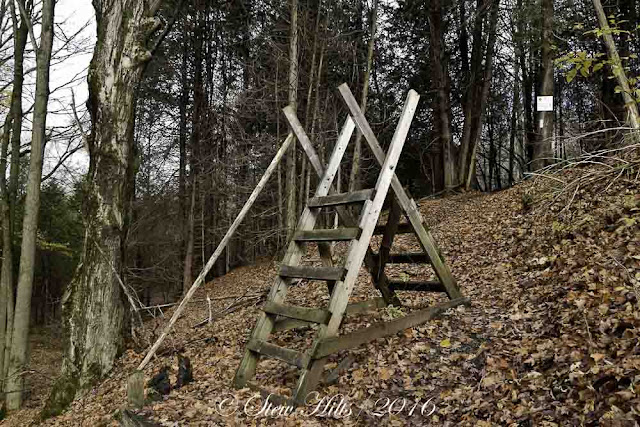 And this is one of those 'no-longer-needed' stiles, the fence completely fallen down.  I was surprised because the stile seemed fairly new, but the fence wire we found on the ground was very old.  Too many pictures to finish this hike in one day, so more tomorrow.

I've had a frustrating two half-days digging out my old plumbing tools to try and fix a tap.  The taps they put in for our washer do not have washers, and cannot be repaired once they develop a leak.  But the tap was soldered directly onto the copper pipe, and there was no shut off valve!  It took four trips to the hardware store, and three different tries to come up with a solution.  I think I finally have it fixed with the magic new shark-byte taps that don't need soldering.  It seems to work, and doesn't leak, but it turns on the copper pipe.  I just don't trust it not to leak!  I think I should have just called a plumber!
Posted by The Furry Gnome at 8:18 PM