I had heard that there was a new memorial near Niagara Falls, honouring the First Nations who were allies of the British in the War of 1812, so we stopped at Queenston Heights to find it.  It was a fascinating story! 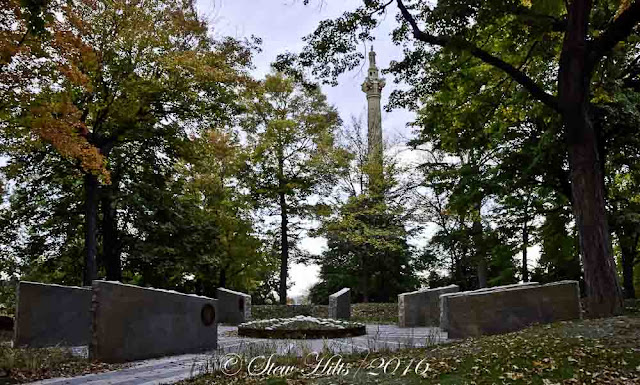 We walked in past Brock`s Monument, and under the trees until we found the memorial.  It consists of a circle of 8 slabs of marble, each with a bronze plaque honouring one of the Chieftains of the time, of the Six Nations.  It was just unveiled in early October after a long process of fund-raising and design to get it built.  That`s Brock`s Monument in the background. 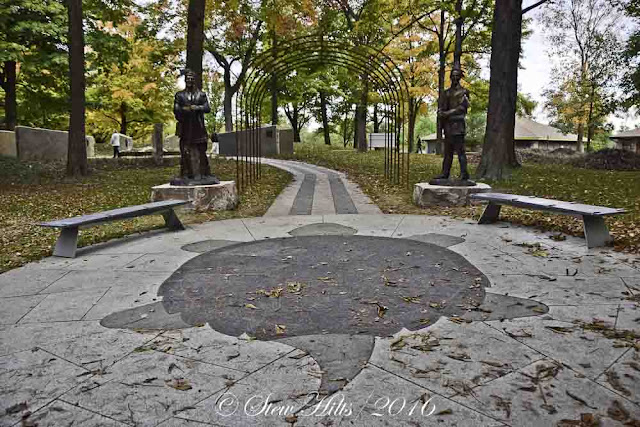 You enter the site on this sidewalk, with the symbol of the turtle in the stone, between two larger-than-life bronze sculptures of the two main native chiefs of the Six Nations, John Norton and John Brant.  The steel loops arching over the walkway represent a longhouse; the Six Nations refer to themselves as `People of the Longhouse`. 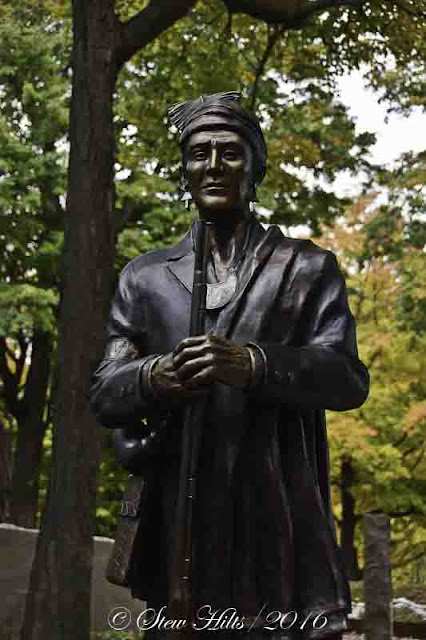 John Norton, a Mohawk Chief who had been a protege of John Brant, below.  He led the Mohawk into battle with Brant. 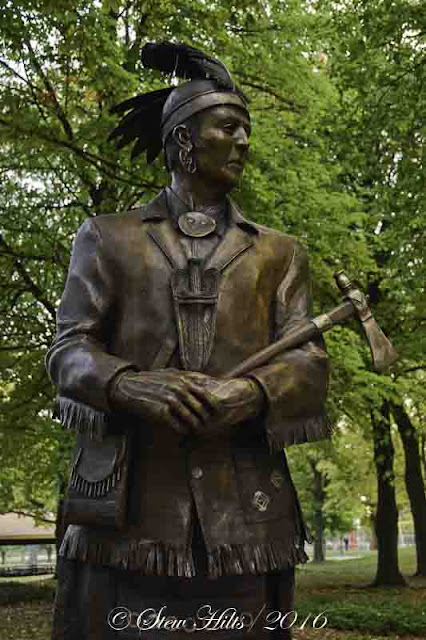 John Brant, son of Joseph Brant, also a Mohawk Chief who led the native warriors into the Battle of Queenston Heights with John Norton, after Sir Isaac Brock had died in the battle. 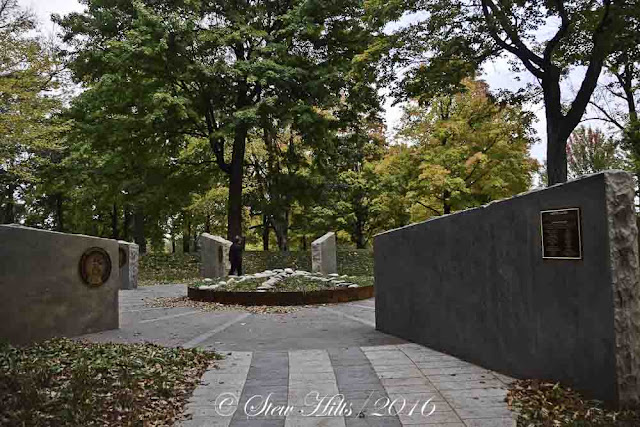 As you follow the walkway you enter the circle at the centre of the memorial.  The two bands of darker stone on the walkway represent the Two Row Wampum Treaty between the Six Nations (then the Haudenausanee) and Dutch settlers in the early 1600`s.  The First Nations at that time recorded their treaty in the form of wampum belts of different coloured beads, rather than on paper.  The two dark rows represent the ships of the Dutch and the canoes of the native people, sailing together, respecting each other. 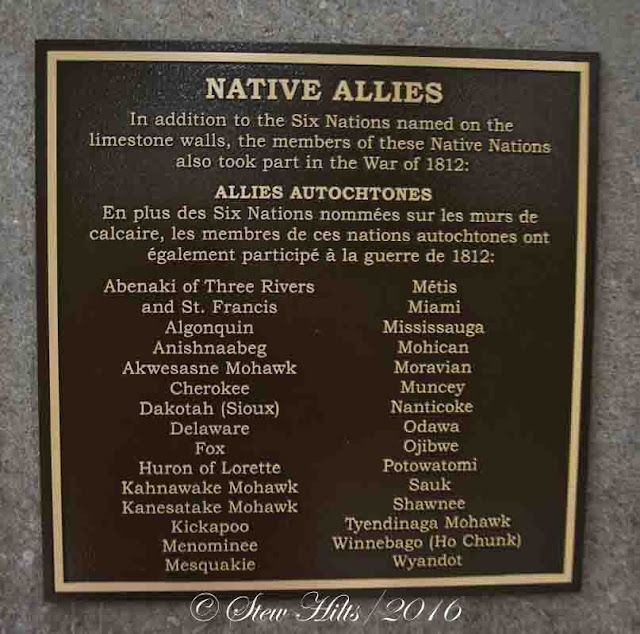 As this plaque says, in addition to the core Six Nations led by the Mohawk Chiefs, this memorial honours the numerous native First Nations who were allies of the Mohawk and the British. 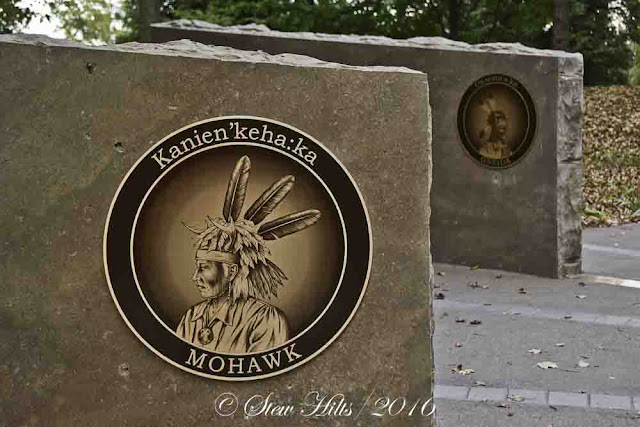 The plaques on each of the marble slabs honour the Chiefs of the Six Nations at the time. 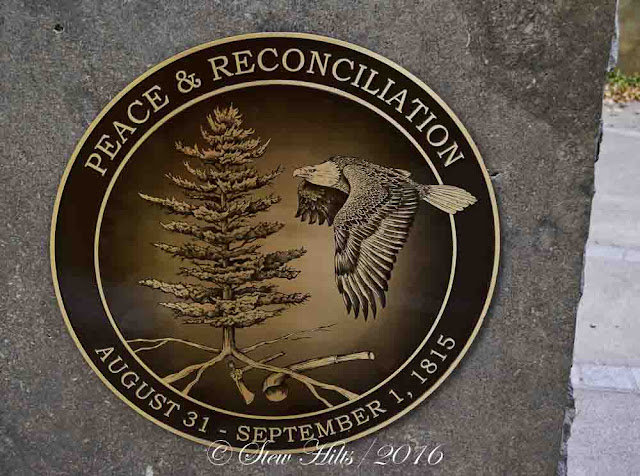 But there is also a plaque honouring the Peace and Reconciliation of 1815.  Some First nations did fight on the American side, though a smaller number.  This ceremony was to re-establish peace among those First Nations who fought on opposite sides during the war. 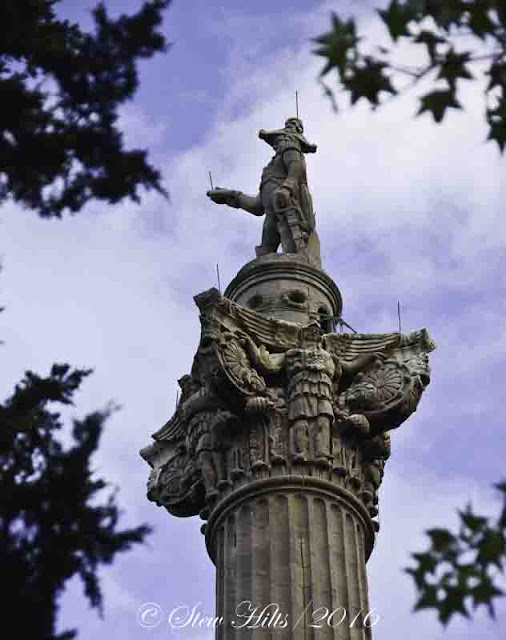 The huge monument to Sir Isaac Brock reminds you of the similar column honouring Nelson, in Trafalgar Square, London.  Some would say it`s a monument to British imperialism and colonialism.  Brock is honoured as he was in charge of the British Troops and died at the Battle of Queenston Heights.  But historians generally agree that it was the native warriors who saved the day when Brock died and his troops began to waver.  High time we honoured them as well if you ask me! 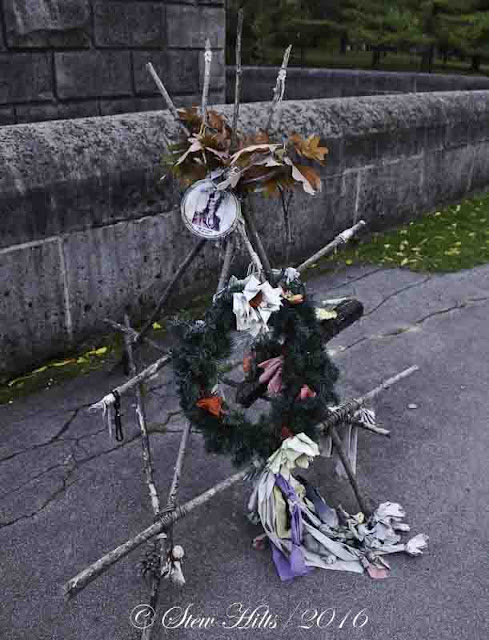 Another reminder was a simple native memorial to Chief Tecumseh, sitting right in front of Brock`s Monument.  Chief Tecumseh played a huge role as an ally of the British, but he wasn`t directly involved in the Battle of Queenston Heights.  I realize there`s so much about the War of 1812 that I simply don`t know. 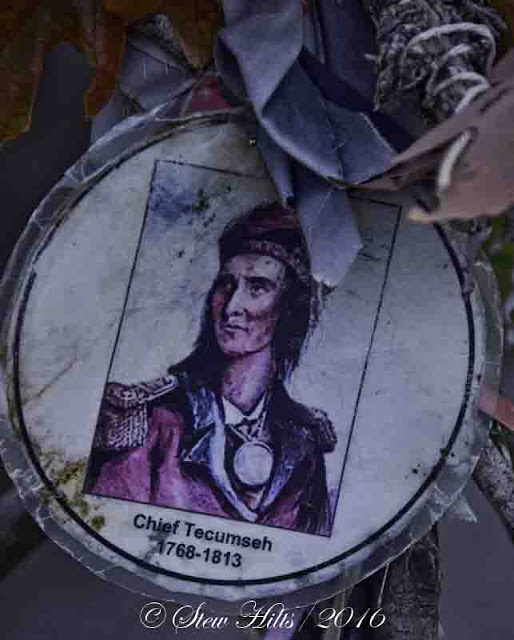 I found myself only able to do some very superficial research on all this (I haven`t touched at all on the fact that America was attacking Canada during this war).  In fact southern Ontario was a very sparsely  populated British Colony at this stage, and I`m not sure anyone had even thought of the idea of `Canada`.  Both the First Nations and the War of 1812 are worth a lot more reading and perhaps visiting some relevant historic sites.  I feel a future visit to Niagara-on-the-Lake coming on, but with a different theme next time.
Posted by The Furry Gnome at 7:59 PM