The next Bruce Trail hike we did was heading toward Eugenia Falls from the north.  We started at Campbell's Hill, and walked all the way to the falls.  There was a fair bit of up and down hills on this one, somehow it always seems like more uphill than down!  But it was almost entirely through beautiful deciduous woods.

The orange and red Sugar Maple leaves had mostly fallen by the end of October, but the yellow Beech leaves were hanging on, and these woods seemed to have a lot of Beech trees! 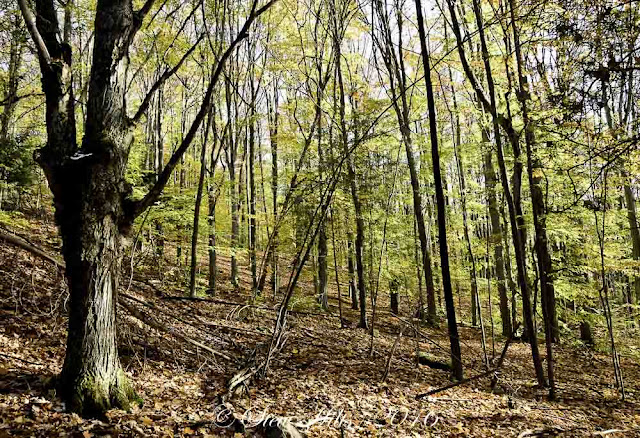 We repeatedly commented to each other what a beautiful walk it was, on a warm sunny afternoon, through the beautiful sunlit forest. 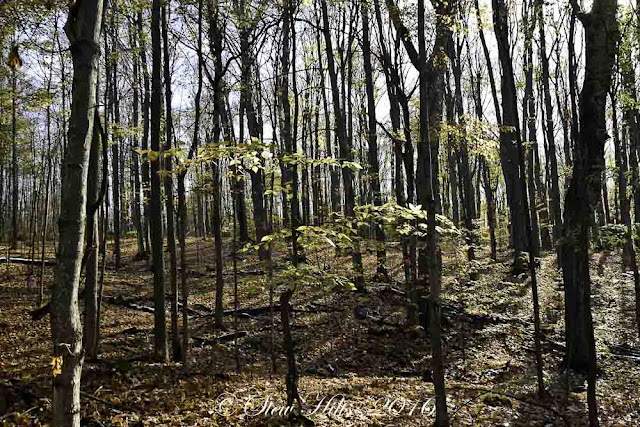 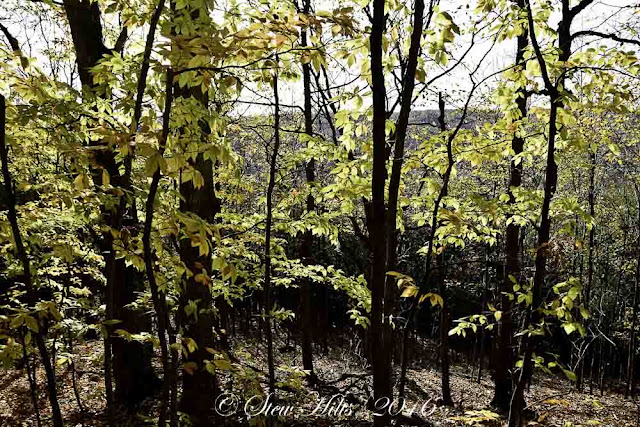 The sun slanting in from the west lit the Beech leaves like tiny lights. 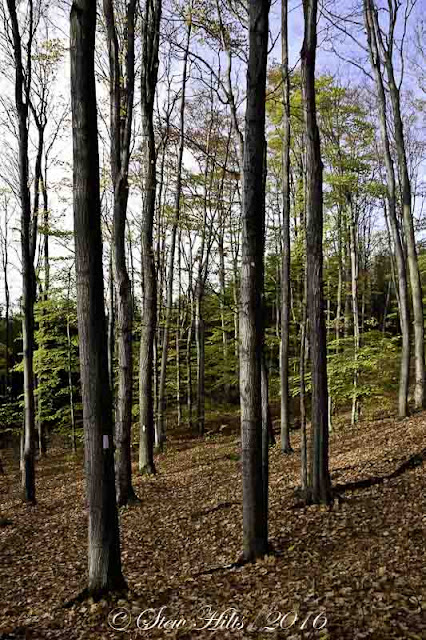 These are my favourite types of woods along the Bruce Trail - except for the hills! 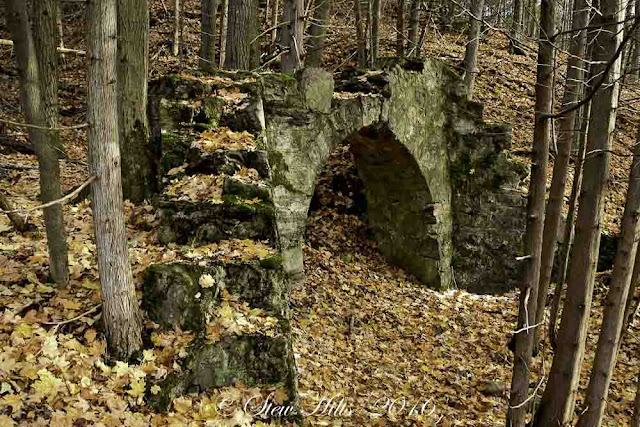 Then suddenly we came across this in the middle of the woods!  I wasn't expecting it, though I recognized immediately what it was.  I've seen the other end of this tunnel entrance (3rd photo below), and had a vague idea it was part of an attempt to build a hydro plant 100+ years ago. 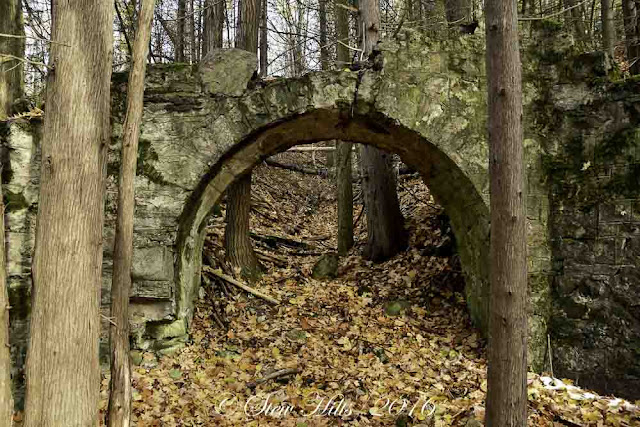 The arch was still standing, but it looked liked it might not stand for another 100 years. 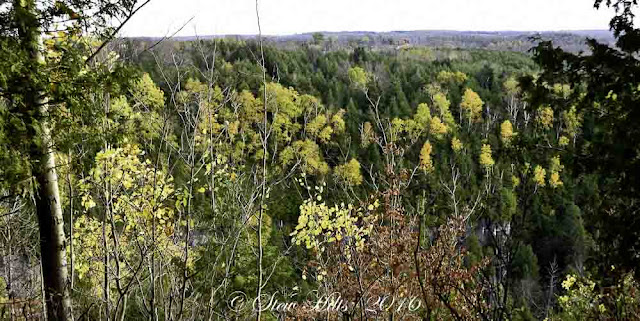 After that it was one of the steeper hills, but we did come out to a nice view over Cuckoo Valley.  A lot of yellow Trembling Aspens among the green Cedars. 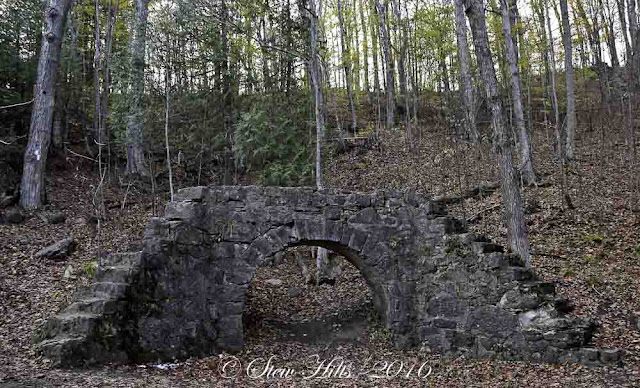 Down the very steep hill we went (carefully), and came out at the other tunnel entrance, right beside the falls.  This one seems to be in better shape. 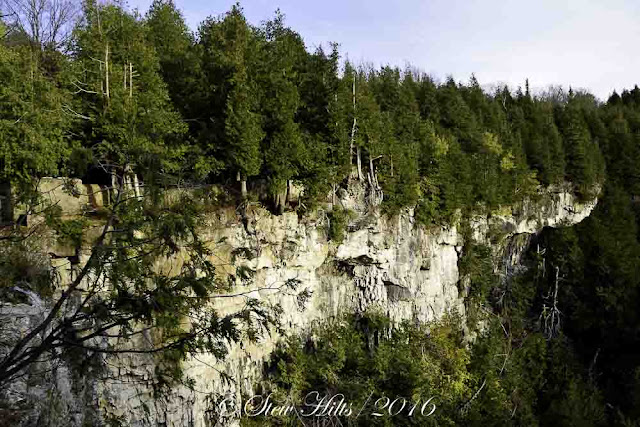 Arriving on the north side of the falls we got an interesting view of the cliffs.  Visitors normally stand at the top of that cliff, so they don't actually get a view of it.  But today the river was only a small trickle you could step over. 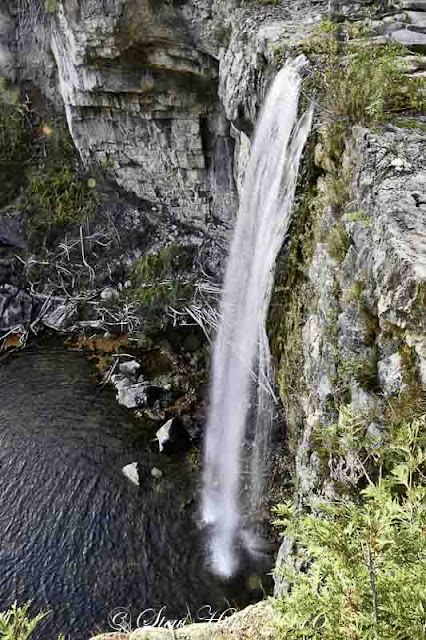 A nice sideways view of Eugenia Falls ended our hike.  But my interest in history had been peaked, so I looked up what I could find about the old hydro tunnel.  Here's a picture from the display board in the Conservation Area showing a group of men working on building the tunnel.

Eugenia Falls was recognized early as a potential site for the generation of hydro-electricity, but the site was owned by William Hogg (after whom Hogg's Falls was named.  There was a small hydro plant on the river above the falls, but Hogg's price for the falls itself stalled development for years.  More than one company was formed, started work, and went bankrupt.  Numerous investors lost large chunks of their money.

This tunnel was one of the failed attempts, built by the Georgian Bay Power Company in 1906/07.  It was just under 900 feet long, and would have carried water through the hill beside the falls, then down into the valley to a generating plant.  It would also have required construction of a dam right above the falls, and most of the water flow would have been diverted through the tunnel.  There was widespread debate in the town over losing the beauty of the waterfalls.

But they too went bankrupt, and though the tunnel remained a tourist attraction for years, it was eventually filled in for safety reasons.  The only evidence remaining is these two gates.  The power rights were sold to the Hydro Electric Power Commission, now Ontario Hydro.  A decade later, in 1914, the dam upstream creating Lake Eugenia was built, with pipes carrying water to a hydro plant further north in the valley.  That plant celebrated its 100th anniversary in 2014.  It has the highest head (water drop) of any power plant in Canada east of the Rockies - small but mighty!  And Eugenia Falls has almost never looked the same since!