After five wonderful days in Florence, we hustled our luggage onto a train (in 10 stressful minutes of chaos), and had a fast trip to Venice.  Once there, everything was done by boat, or walking - there are no cars in Venice  Venice is indeed the city of boats. 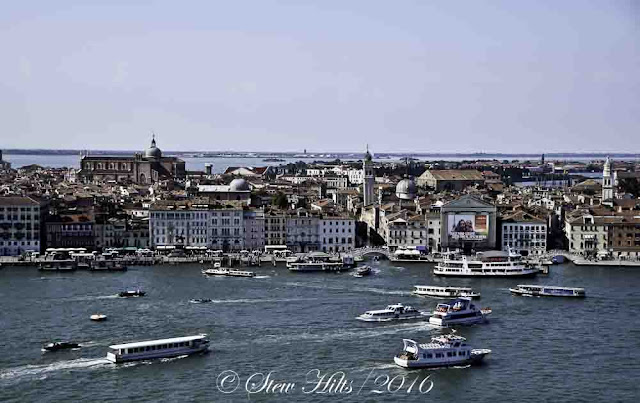 This photo begins to give you an idea, taken from the bell tower of the Church of San Giorgio San Magiorre.  Water taxis, water buses, tour boats, gondolas, delivery boats, private boats.  Can you tell which ones are going to crash into each other next?! 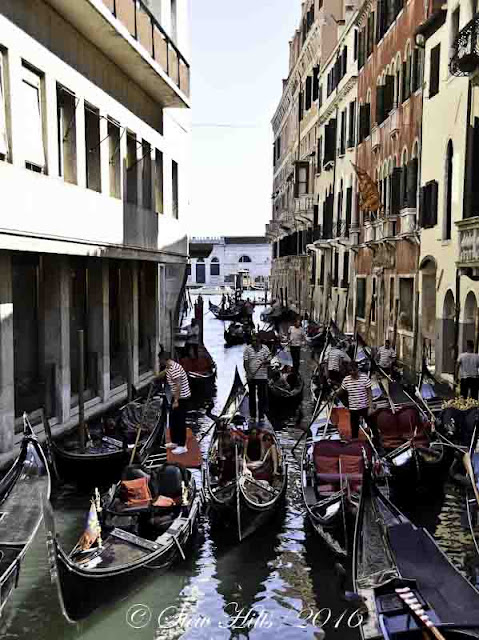 The traditional gondoliers gathered with their gondolas right outside our hotel every day, at one of the tour spots, all jostling for paying customers.  There are dozens of small canals through Venice like this, and there hundreds of bridges. 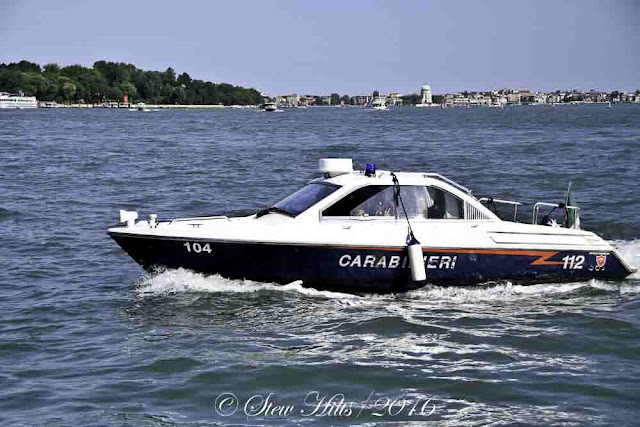 All services are provided by boat, so there are police boats (the 'Carabinieri'), garbage boats, ambulance boats, delivery boats, and firefighting boats. 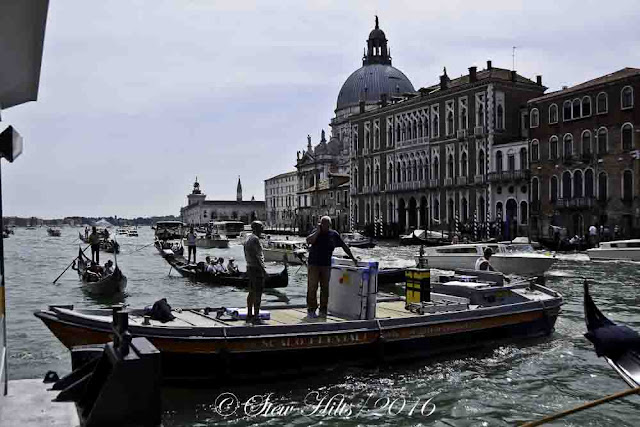 Here a delivery boat is backing out into the Grand Canal, miraculously interrupting traffic without incident. 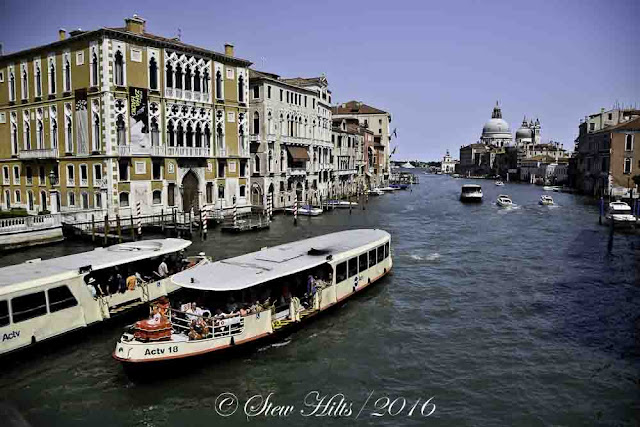 The 'vaporetto' are the water buses that locals use, along with tourists who figure out how to use the system.  They're very handy if you want to get to more distant parts of town.  We bought a 3 day pass, and hopped on and off whenever we wanted.  There are designated stops along the Grand Canal, around the outer shore, and to some of the outer islands. 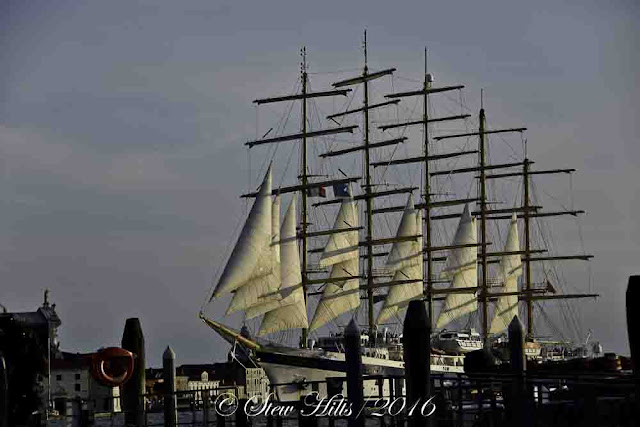 This was perhaps the most interesting ship we saw, pulling out of harbour one day sailing into the Adriatic. 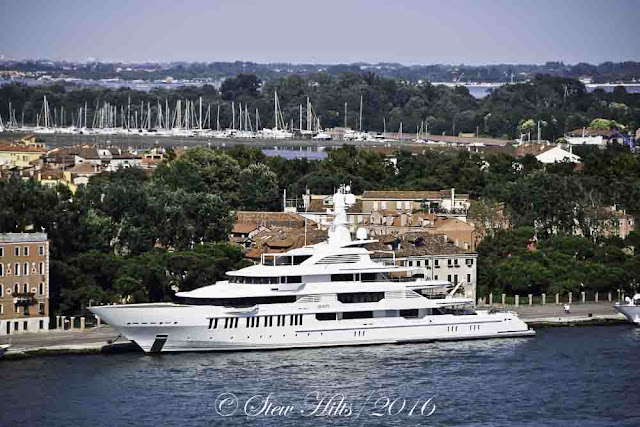 The billionaire super-yacht, the Infinity looked pretty fancy too, but not our style! 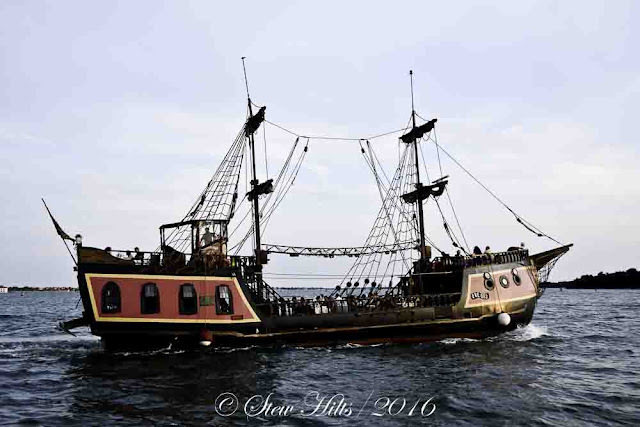 More to my liking was this genuine pirate ship, the 'Jolly Roger'. 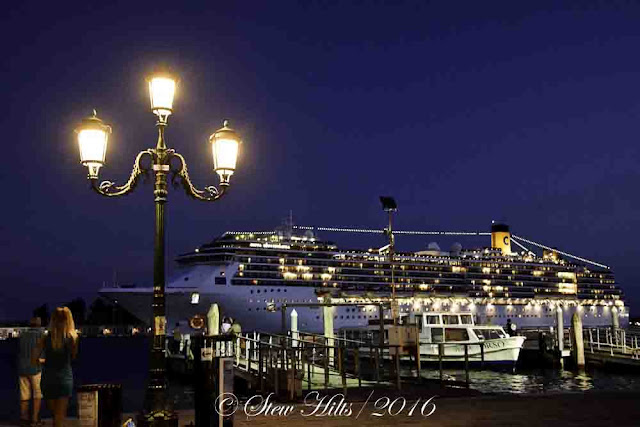 The cruise ships are another story.  This is the only one we saw, sailing past us as we ate dinner one evening on the sidewalk overlooking the lagoon (dinner is always late in the evening in Italy).  Because of the problems Venice has with high water levels, and because of the extreme crowds when several cruise ships are in town (Venice gets 24 million visitors a year!!!), there's been quite a bit of controversy over these ships, and attempts to ban or limit their numbers.

The problem is seen not so much as the cruise ships visiting Venice, but the route they sail through the narrow Giudecca Channel, just off St. Mark's Square between two of the main islands.  First the large size cruise ships were banned from using this route, then the ban has been lifted, then the mayor of Venice was jailed for corruption so nothing was done, and so the controversy continues.  Much more serious is the problem of high water levels, which I'll write about another day.