Marie mentioned in yesterday's comments that Galileo's tomb was a highlight for her.  It's found in the Basilica of Santa Croce, along with Michaelangelo's.  It's a large church, with numerous tombs and chapels around the sides, including Machiavelli's as well.. 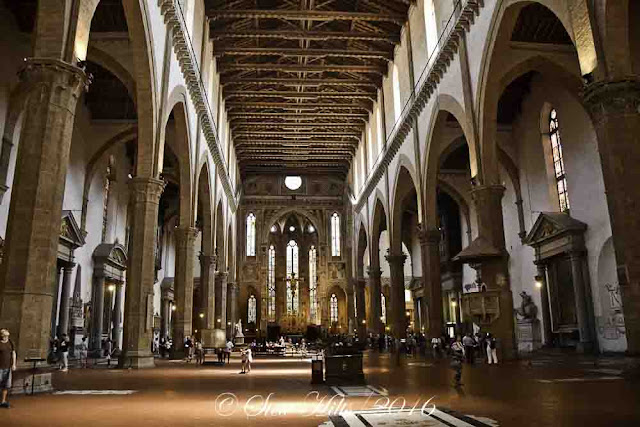 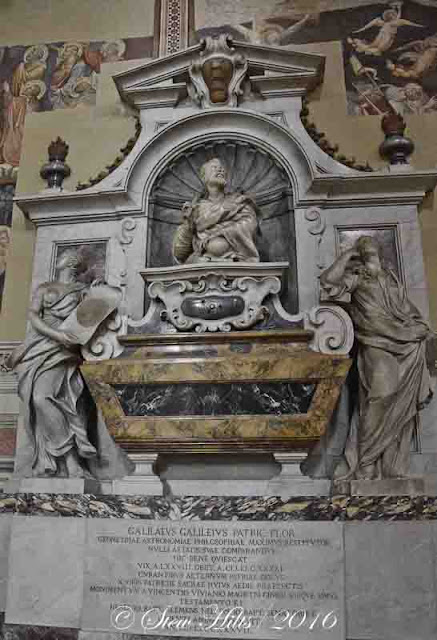 This is Galileo's tomb.  He lived from 1564 to 1642, and is renowned as a scientist who pioneered modern astronomy, and defended the idea that the planets revolved around the sun as suggested a few years earlier by Copernicus (known as heliocentrism). 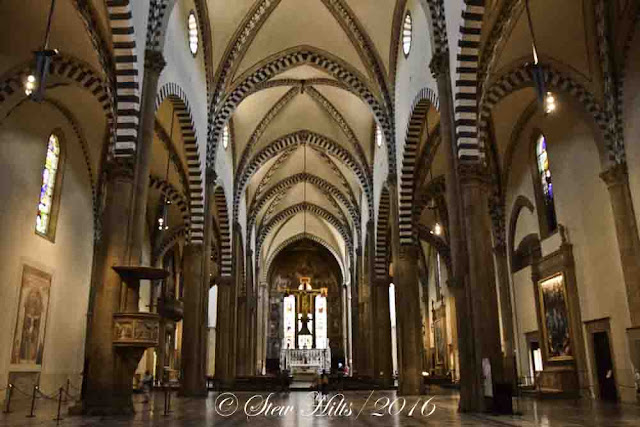 Across town is the Basilica di Santa Maria Novella.  This is the church where Galileo was first condemned for his view, in comparison to the Aristotelian view that all planets (including the sun) revolved around the earth, which was supported by the church at the time.  You can see the pulpit on the left hand pillar. 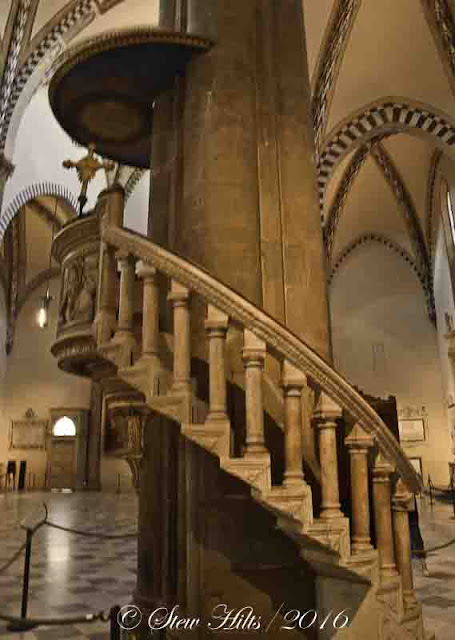 A priest stood in this pulpit to condemn Galileo, and the eventual result was that he was charged with heresy, and forced to recant his views.  He lived the rest of his life under house arrest, and was buried in an obscure back corner of the church.  Only in 1737 was his tomb moved to the main body of the church. 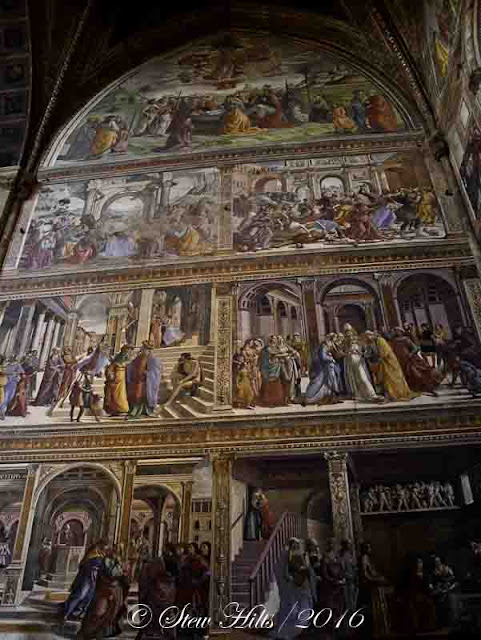 This church is also known for its incredible frescoes, amazingly bright and colourful after several hundred years, dating mostly from the 1300's and 1400's. 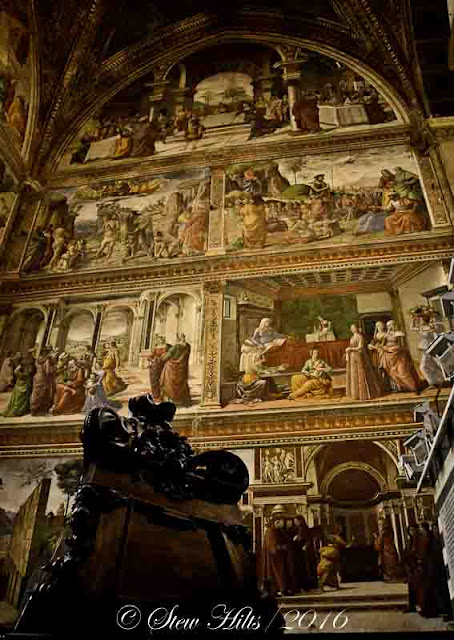 Frescoes are basically paint embedded in plaster.  The paint is applied to wet plaster, so that as the plaster dries, the paint becomes actually embedded in the wall. 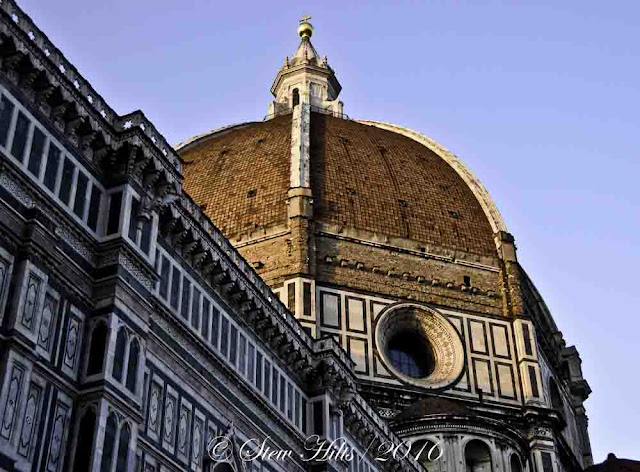 I also wanted to show you that lantern on top of Brunelleschi's dome at the Duomo.  It's a lot bigger than you think looking at it from the ground. 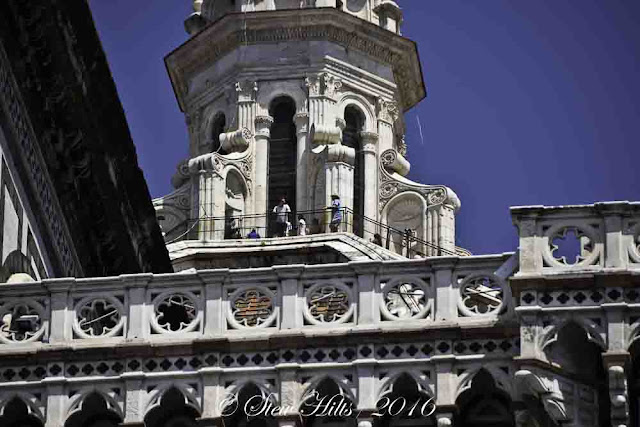 Here's a close-up, and you can easily see the people who have climbed up those 529 steps in a narrow spiral staircase to get there.  I had hoped to climb up here myself, but after we spoke to someone else who had done it, I was quickly content to admire it from the ground! 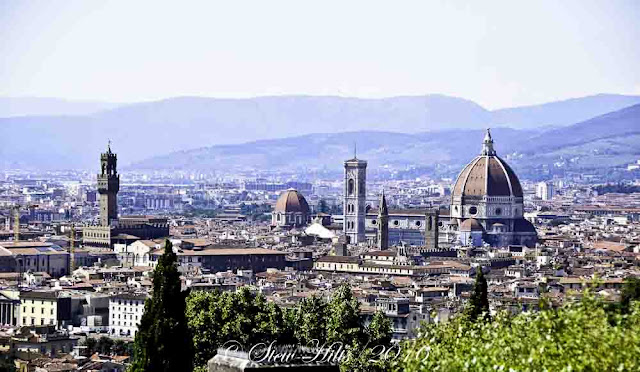 We'll finish with this view over Florence, taken from the south side of the river.  The far left tower is the Town Hall, and the smaller dome is the Basilica di San Lorenzo.  Both the large dome and the square tower are the Duomo.