We had been to Venice before, so this time we were determined to avoid the tourist hot spots and take in some of the lesser visited corners of the city.  The Church of San Giorgio Magiorre was one of those spots.  Virtually every tourist who visits Venice sees it, because it's straight across the water from St. Mark's Square, but very few find their way there. 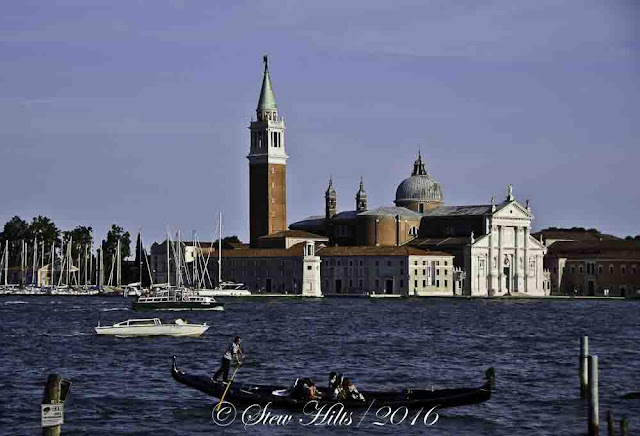 This is the church, from St. Mark's Square.  Both the massive white facade and the bell tower make it hard to miss!  But there's a vaporetto ride to get there - thins out the crowd dramatically. 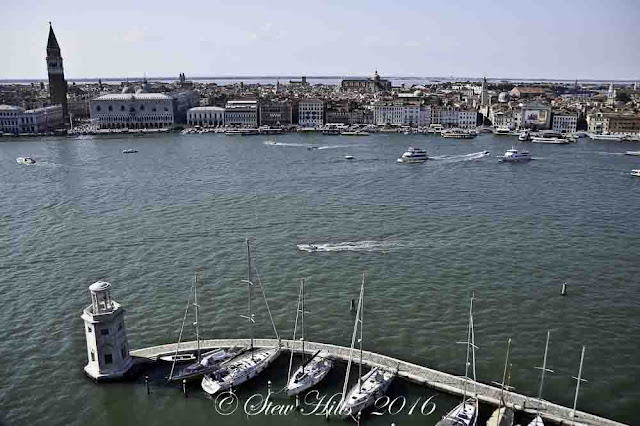 This bell tower has an elevator, and no line up!  A pretty good invitation.  The view back north to the main city shows St. Mark's square and bell tower on the left, and the very popular walk along the shoreline. 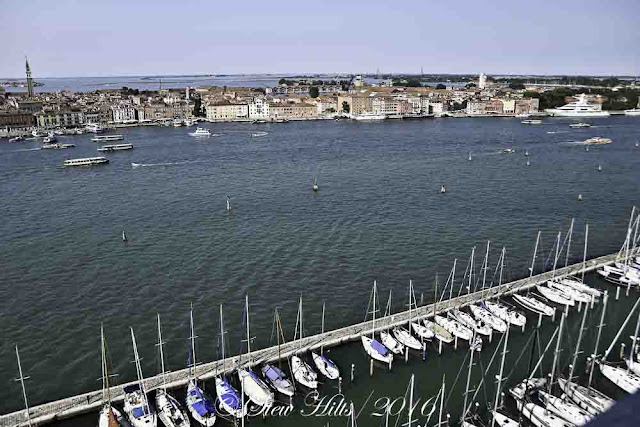 And this view shows the main islands extending to the east, down to that luxury super-yacht.  A marina of sailboats outside the church in the foreground.  We walked that shoreline several times. 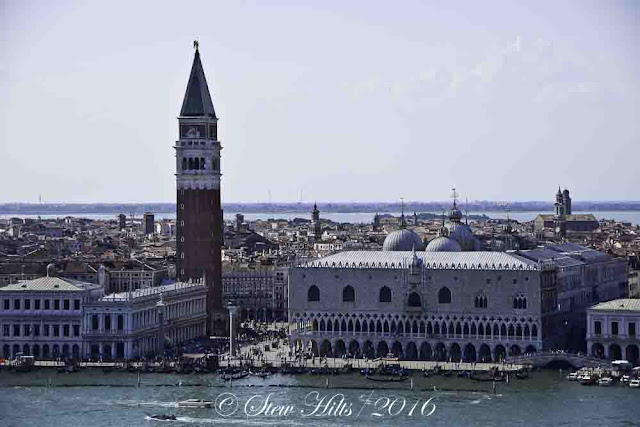 A closer look at St. Mark's Square and bell tower also shows the Doge's Palace, the large building to the right, and the domes of St. Mark's Basilica behind.  We had a fascinating tour of the dungeons and secret passages of the palace, including the famous 'Bridge of Sighs' over that little canal on the right, where the prisoners 'sighed' as they caught their last glimpse of the outdoors on their way from judgement to their jail cell. 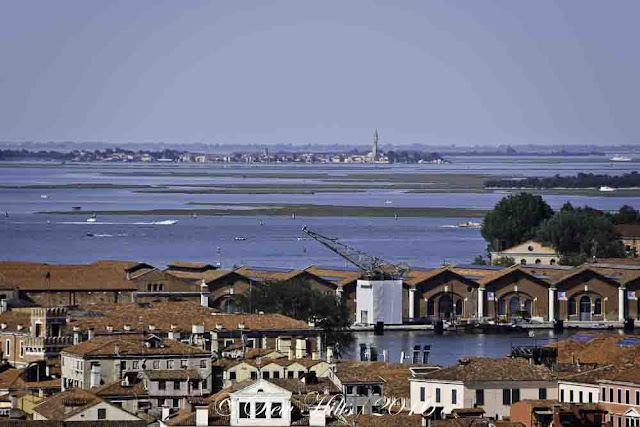 Looking out all four sides of the bell tower you get a great perspective on Venice, the outer islands, and the lagoon itself.  Here, looking across Venice in the foreground you see the island of Burano in the far distance, across the tidal flats, with another leaning church steeple. 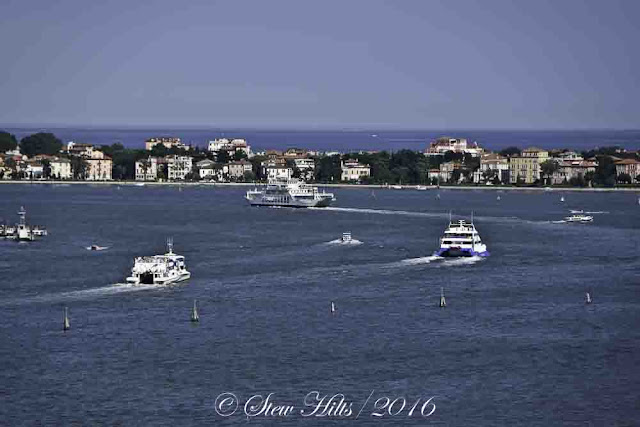 Looking east you see the Lido, the nearby outer barrier island between the Venetian Lagoon and the Adriatic.  The part closet to Venice is quite built up. 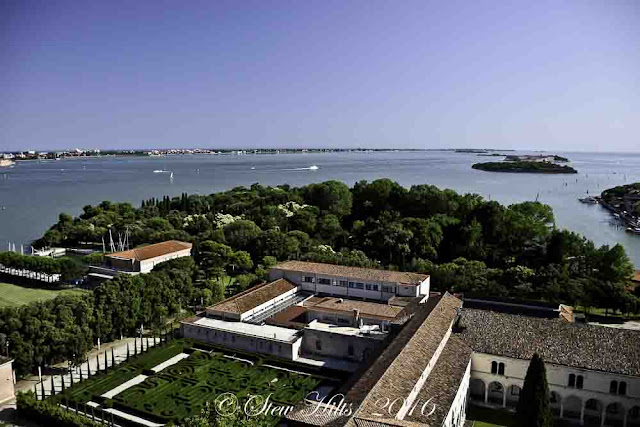 But looking south you can follow that outer island far far south, forming that barrier between the see and the lagoon.  San Giorgio Magiorre is not merely a big church, it's an active monastery.  And down below you can see a maze among its gardens. 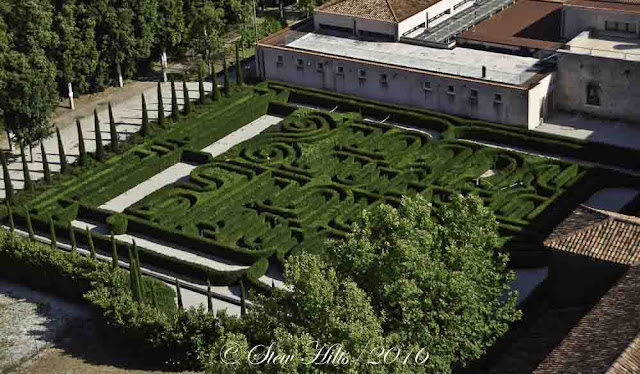 We got as close as that sidewalk on the left, but the maze was fenced off. 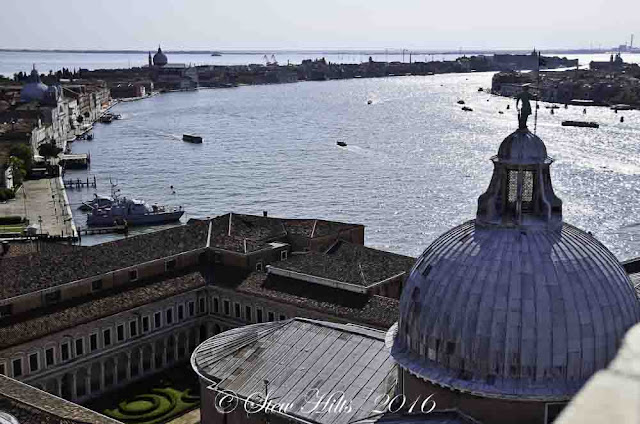 Looking west you can follow the long curving island of Guidecca, separated from the main part of Venice by the Guidecca Channel, the favourite route of those big cruise ships. 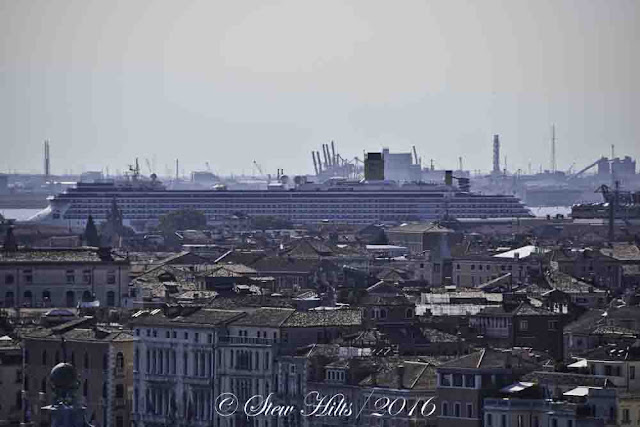 And there in the distance is one of the big ones, locally referred to as the 'skyscrapers of the seas'. 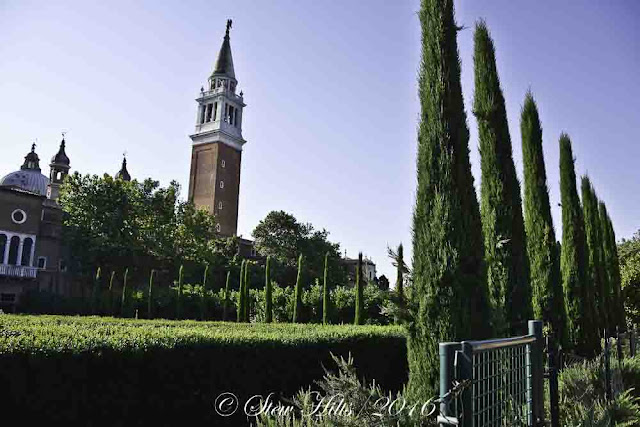 We really enjoyed getting to this less visited corner of Venice, and getting the view from this bell tower.  That will be one of the memories of this trip, in spite of the fence separating us from that maxe just behind the hedge!