How can I possibly tell you about Florence in only a blog post or two?  The original centre of the Italian Renaissance in the mid-15th century, Florence led the way in the great cultural awakening that hit Europe and brought about the modern age.  Walking through parts of old Florence is like stepping back five centuries to the time of Michaelangelo, da Vinci, and Botticelli, and the notorious Medici family. 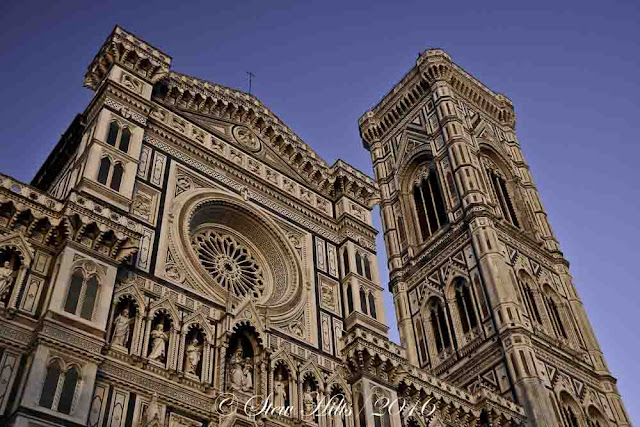 Let me hit the highlights today; I have a lot of research to do to properly explain many of the other sights we saw.   The Duomo, the 'Cathedral of St. Mary of the Flowers', is the most important tourist site in Florence.  The wait to get in to see the front of the church and the dome was two hours.  This is a view of the front facade and the bell tower in the evening sun. 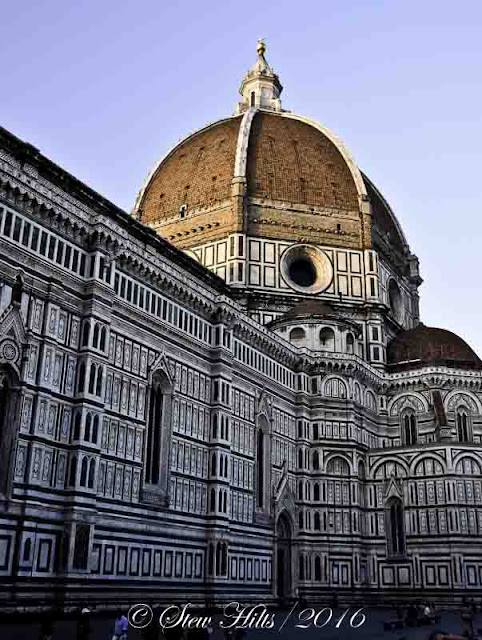 And this is Brunelleschi's famous dome, completed in the mid-1400's, still the largest masonry dome in the world.  No-one else could figure out how to build it, and architects still debate just how Brunelleschi did it.  You can climb right up to the lantern on top of the dome.  This is widely considered one of the greatest pieces of Renaissance architecture anywhere. 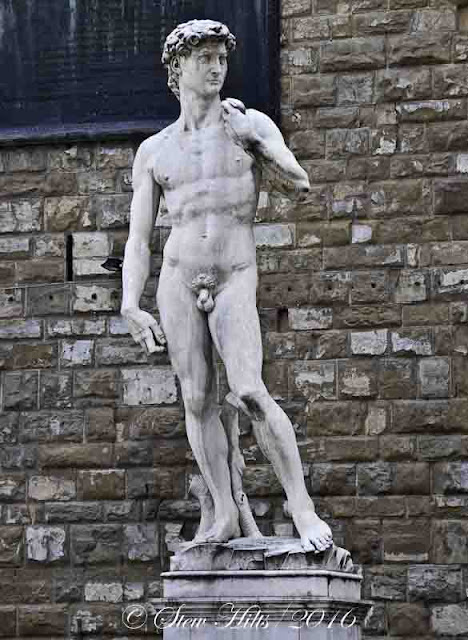 And of course we stopped by to say hello to Michaelangelo's 'David'.  There are three 'Davids' in Florence; the original is now in the Academia Gallery.  This is a copy, but standing in the original location, outside the town hall on the Piazza della Signoria. 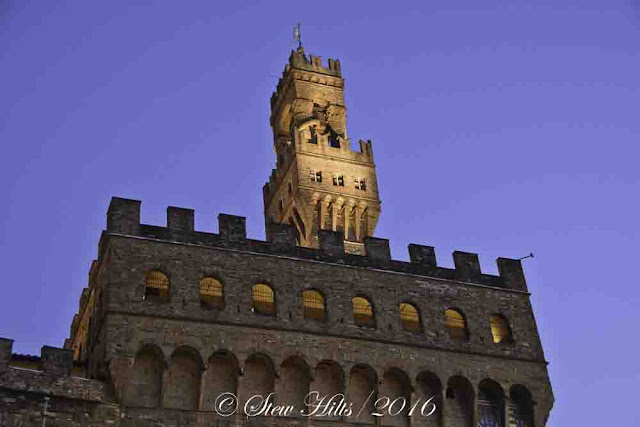 We saw David on our 2013 visit, but the sculpture in the gallery seemed completely out of context to me.  The copy of this larger-than-life man standing outside the town hall makes perfect sense.  'David' was a political statement by Michaelangelo, whose work was sponsored by the Medici family.  Above, the town hall in the evening. 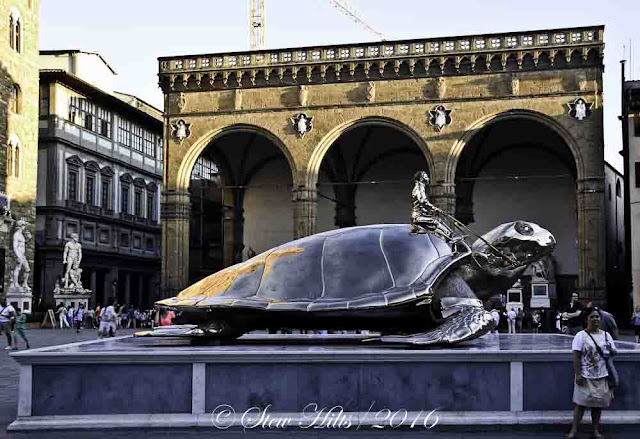 There are numerous sculptures on Piazza della Signoria.  That's David on the far left, beside Hercules, at the door to the town hall.  Many more are under the Logia in the background, protected from the weather.  The buildings are part of the Uffizi Gallery,  home to the Medici family's personal art collection.

And in the foreground is a temporary modern installation by Jan Fabre, entitled 'Searching for Utopia'.  Interestingly, the turtle was a Medici family symbol, and the rider is a self-portrait of the artist himself.  The most significant thing about this modern sculpture is its location in the midst of a piazza devoted to some of the world's greatest Renaissance sculptures - what a contrast! 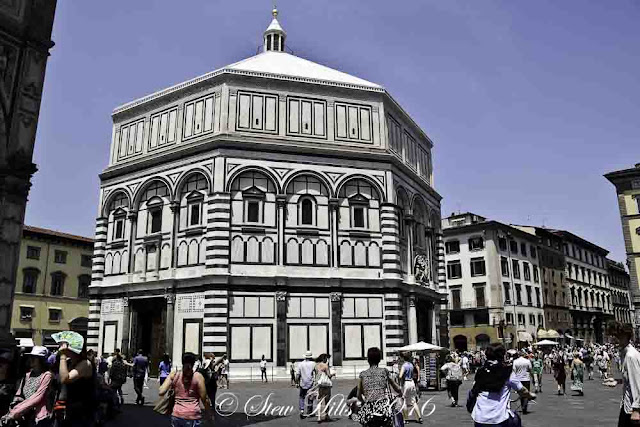 One thing Mrs. FG wanted to see was the inside of the Baptistry, an octagonal building adjacent to the Duomo.  This building is one of the oldest in Florence, dating from about 1100, predating the Renaissance (and the Duomo) by at least 3 centuries.  I won't bore you with the challenging story of getting tickets to see the inside, maybe another time.  We did agree that some Italians working in the tourist industry are running a secret plot to make sure the tourists get frustrated.  Venetian vaporetto pilots are also in on this plot! 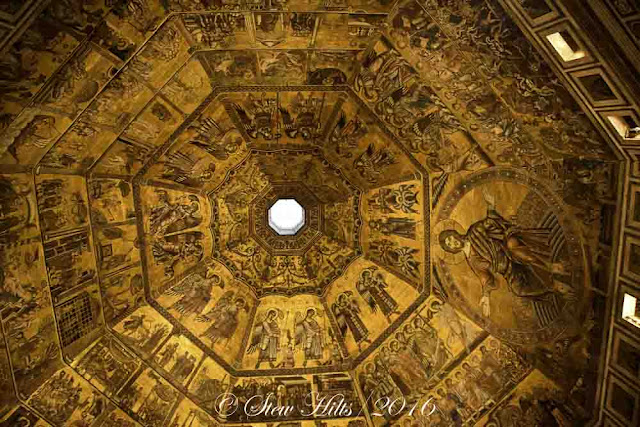 But we did figure it out and the inside is absolutely stunning, especially the ceiling, a mosaic of tiny tiles, not a painting - by unknown Italian artists in the 12th century. 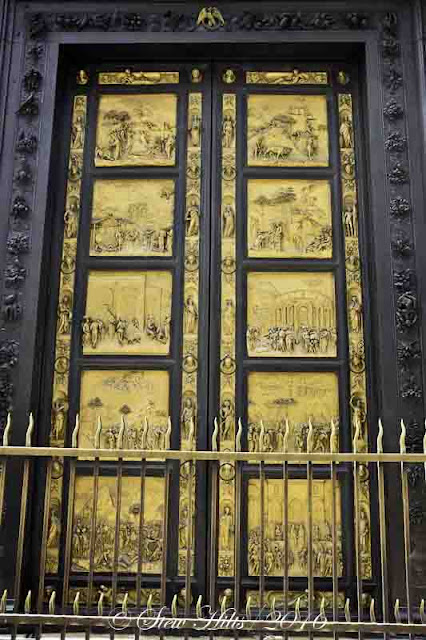 To most tourists, who never get inside, the Baptistry is known for it's doors, especially the east doors, sculpted by Ghiberti and described by Michaelangelo as the 'Gates of Paradise'.  Tourists are sometimes lined up 10 deep trying to get a picture here (or trying to get a selfie in front of the doors - that's another story about today's tourists!!). 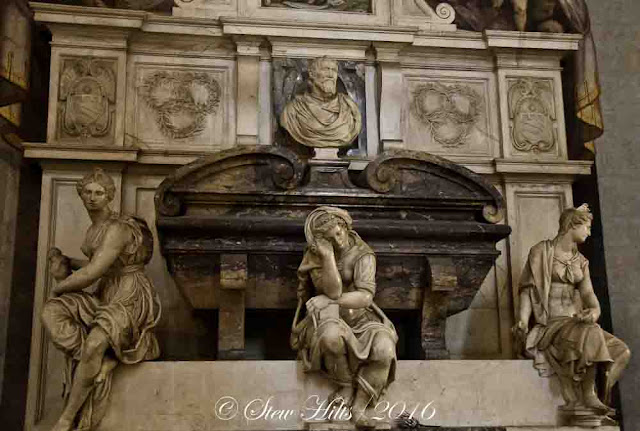 There are several other important churches in Florence, and we find that visiting the inside of these to see the sculpture and artwork is one way to get away from the crowds if nothing else, and to learn a lot of history.  But in fact these churches are grand collections of Renaissance art.  To give you just one example, this is Michaelangelo's tomb, in the Basilica of Santa Croce (across the nave from Galileo's tomb). 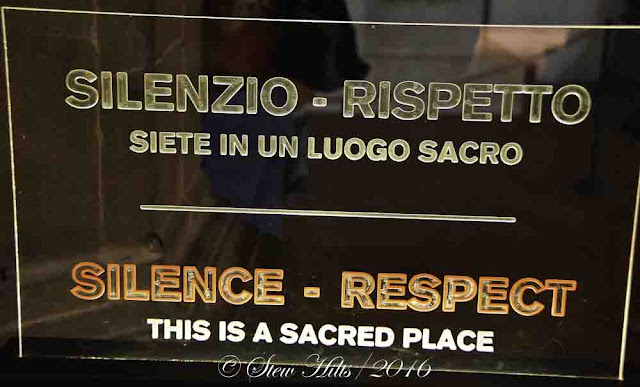 I'm glad to say that a certain degree of respect is still expected in these churches.  Men remove their hats; women cover their shoulders, and conversations are carried on in a hushed tone.  Some don't allow photos at all; most only allow photos with no flash - I got a lot of practice with high ISO settings. 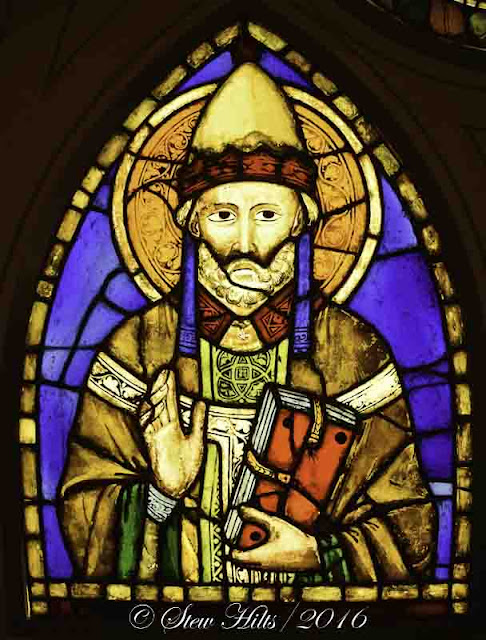 And there were a great many beautiful stained glass windows, and almost all of the churches still hold services for the local parish.  This restored window is also in the Basilica of Santa Croce, which is the largest Franciscan church in the world.  It's a shame that more tourists don't march away from the usual highlights to see some of these other but equally interesting lights!