The saddest thing about Venice is that it suffers from episodes of high water, known as 'acqua alta'.  Before we visited the first time, I didn't realize how serious this was, but I noticed the signs on this trip.  Personally, from what I've read, I think Venice is doomed. 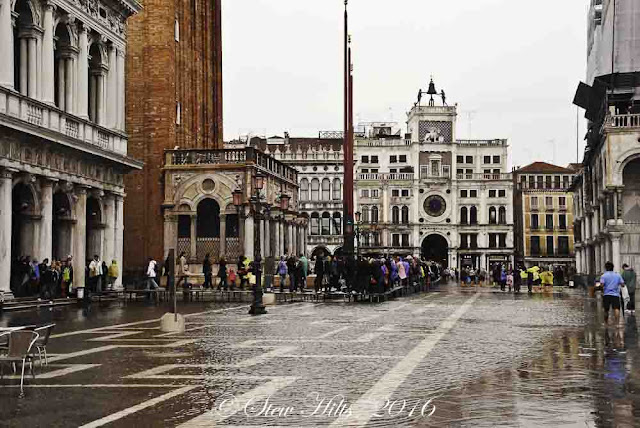 These first five pictures are from our first trip, which was in early October 2013.  High water season is usually Nov. to Apr., but we experienced high water, about 6" deep, in St. Mark's Square, the lowest point in Venice. when we were there  right into the front doors of the big old church on the right. The city puts out raised wooden walkways like this to help people keep dry. 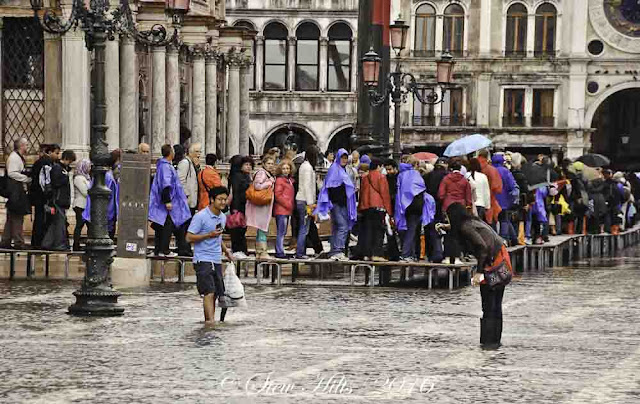 But some people just enjoy the water!

These high water episodes occur when the highest tides, typically in late fall, combine with winds out of the south coming up the Adriatic Sea.  The wind-pushed water outside the lagoon prevents the normal tide from flowing out of the lagoon, trapping more water in where it can rise and flood the town.  It's all in relation to historic measurements of 'normal tides', and starts getting serious when the water level exceeds normal by about a metre. Restaurant chairs in St. Mark's Square, unused because of high water.   You can imagine what the high water does to all the stores and shops.  Many have barriers ready to install in their front doors, and pumps at hand to keep as much water as possible out. 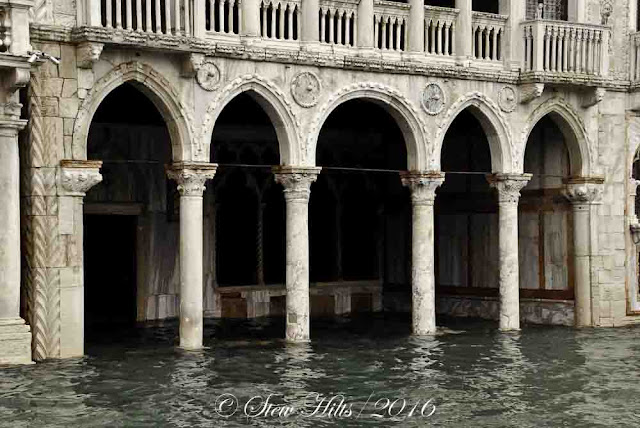 But the lower levels of buildings, especially along the bigger canals, get seriously damaged by the high water levels. 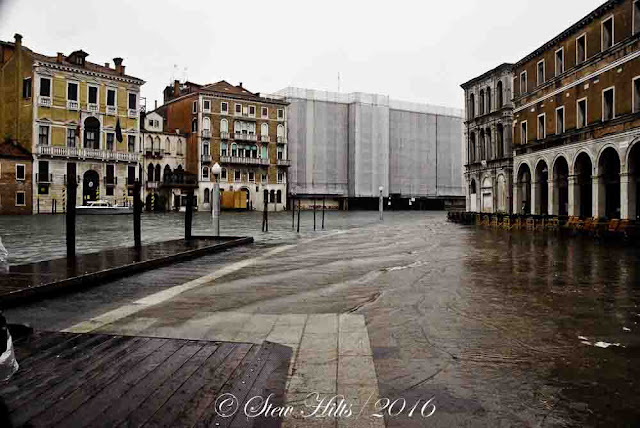 The Rialto Bridge is another low point, here with the water washing over the sidewalk.  But in Nov. 2012, a severe high water event meant that water rose five feet above normal, which would put about 3 feet of water both here and in St. Mark's Square. 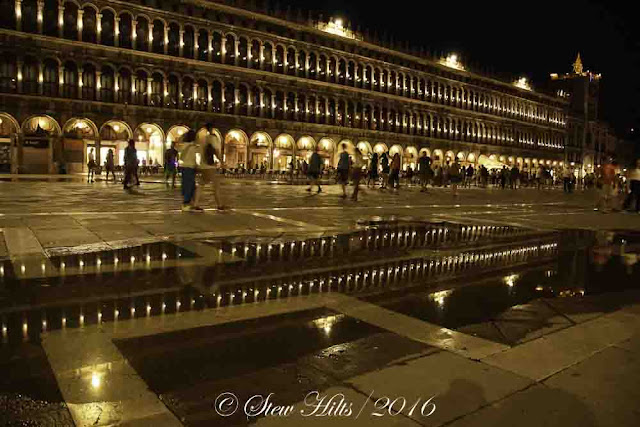 We weren't terribly surprised to see high water in Oct., but on July 1st this trip, there was about 2" of water all the way down the low parts of St. Mark's Square.  That shocked me.   It didn't flood in from the lagoon, but rose through the drains in the middle of the square. 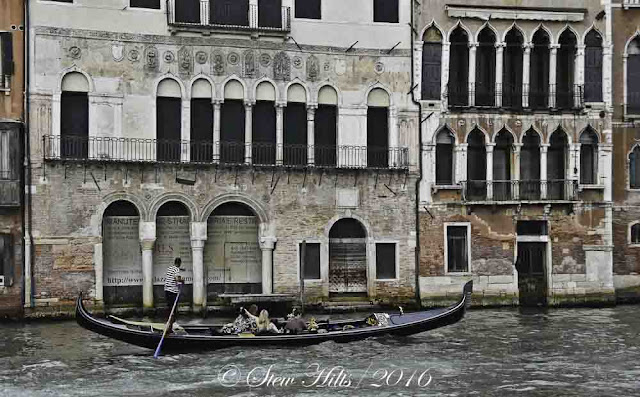 It's the lowest level of buildings along the Grand Canal where we noticed the worst damage.  Traditionally, the lowest levels were used as storage, and the main living area was on the second floor.  This is even more true today as the lowest level is often flooded several times over the winter. 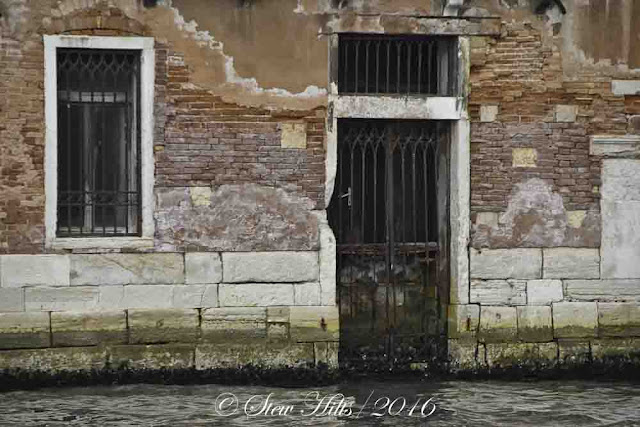 The salt water also has a very deleterious effect on the bricks above water level.  It rises through the bricks by capillary action, and when water at the outer surface evaporates in the sun, the salt crystallizes, expanding in size, and destroying the outer surface of the bricks.  An enormous amount is spent every year on maintenance. 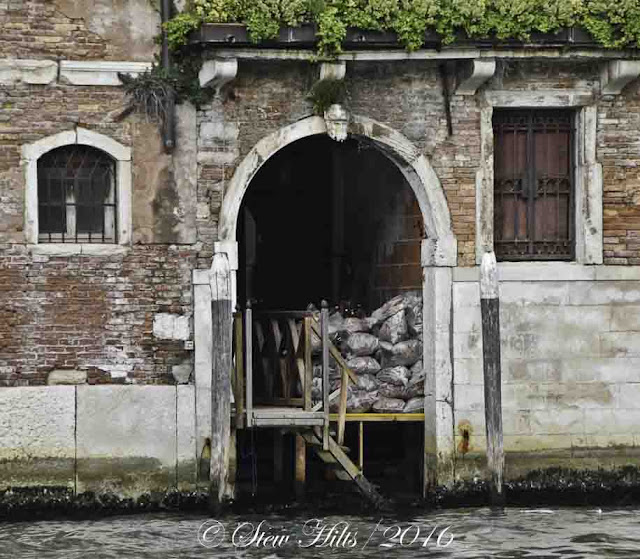 There is a huge project underway to try and control water levels in the Venetian Lagoon during these events.  Known as 'MOSE', it consists of enormous gates that can be opened and closed, across the 3 channels through the outer barrier islands.  However, it has suffered from a lot of controversy, from doubts that it will work, to cost over-runs, to corruption.  In 2014, twenty-three people were charged with receiving about $20 million in bribes from the company building the system, including the Mayor of Venice!

Given Italian politics, huge costs, and other problems, I just doubt they're ever going to be successful, though I hope I'm wrong.

Parts of this information come from the Wikipedia article on Acqua Alta, and you can find lots of Acqua Alta pictures here.  You can read about MOSE here, and there's a great video of how Venice works which you can find here.