The original purpose of our trip, chosen in our euphoria last fall after learning that I was not going to need further surgery, was to do a river cruise down the Rhine.  It sounded like a nice peaceful way to see a new part of Europe, and learn a lot about different countries and places. 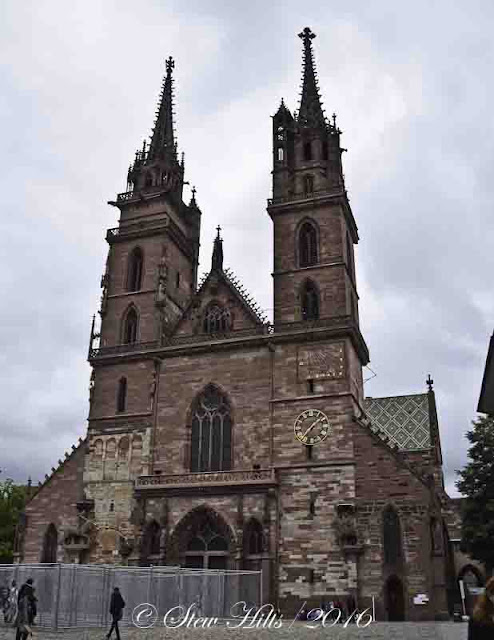 We started in Basel, with its old cathedral, the Basel Munster, built of the red sandstone in the Rhine valley. 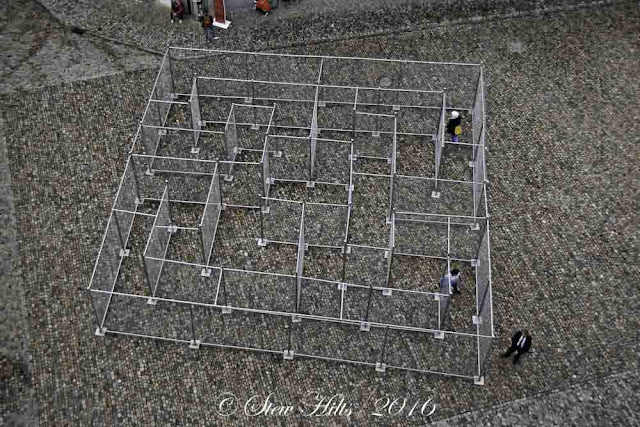 That chain link fencing in front of the church wasn't construction, but a modern art installation.  As you can see I actually climbed the church towers and was able to look down on the art piece (and everything else) from above.  This is a chain-link labyrinth, created by Sam Durant, a U.S. artist, who worked with a group of prisoners to develop the concept.  It's intended to challenge visitors to reflect "on the issues of freedom and imprisonment".  Once I understood it, it seemed very appropriate in front of the church. 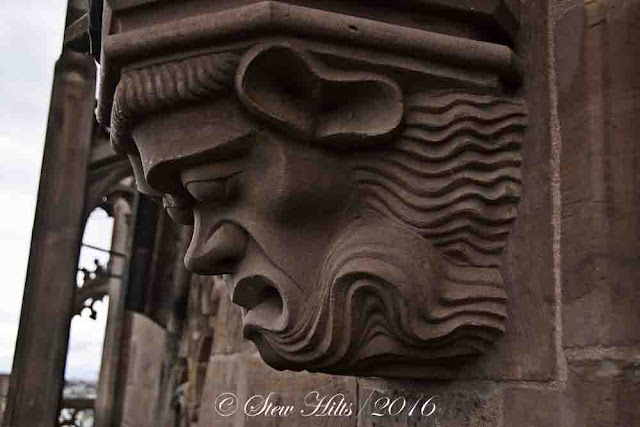 I also got up close and personal with some of the tiny carvings you see up on the church spires.  They're not so tiny when you're up there. 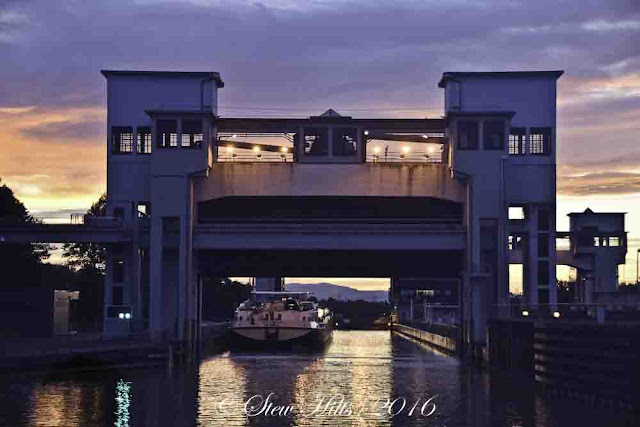 What we saw of the river was very interesting, at least to me.  You don't see much though, because the ship usually sails at night.  This was one of the largest locks we went through, a drop of about 30 feet, and we squeezed right into that space beside the other ship, with a foot of two to spare. 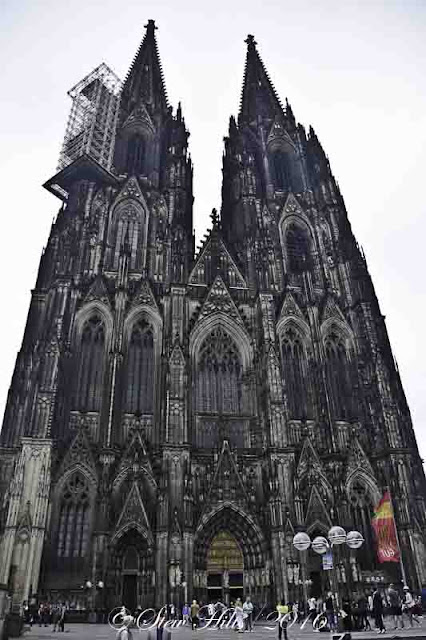 We stopped in or near five towns or cities, and were taken by bus to see the main tourist sites.  This is Cologne Cathedral.  The plaza in front is simply too small to get a complete picture of the building, one of the few to survivie WWII in the city - the downtown is almost entirely post-war.  And all of these old cathedrals are constantly undergoing restoration; it's hard to find one without some scaffolding. 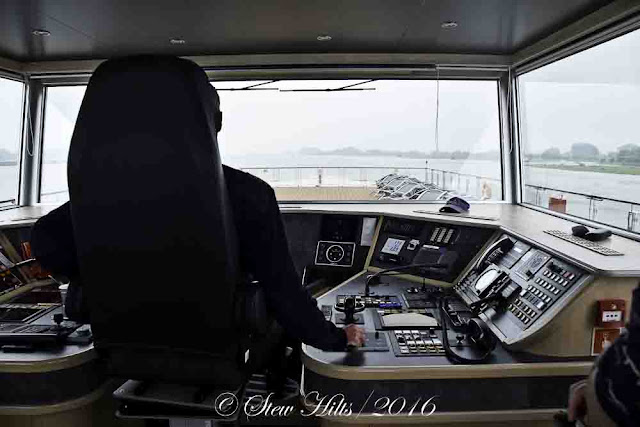 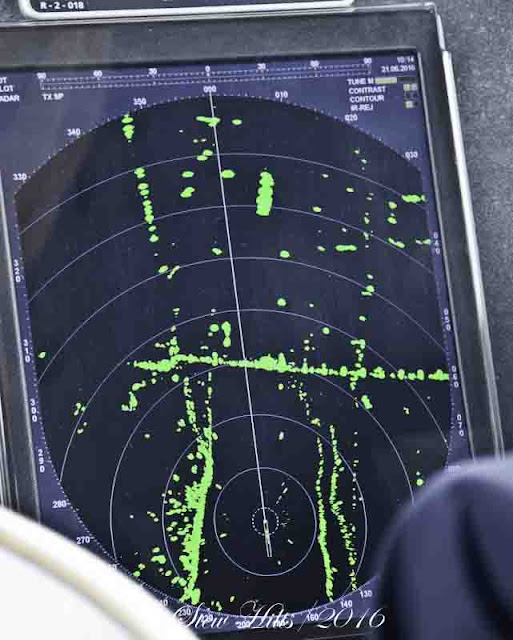 I had hoped we might actually learn a bit about the Rhine River, but not a word, nor a map.  Very little about the countryside we were sailing through, and nothing about other traffic on the river, which was constant.  But our visit to the wheelhouse was fascinating.  This is a new ship, with very modern technology, including radar and gps, rotating rear propellers (rather than a rudder), and water-jet side-thrusters at the bow.  I really enjoyed our half hour with the captain, describing all this. 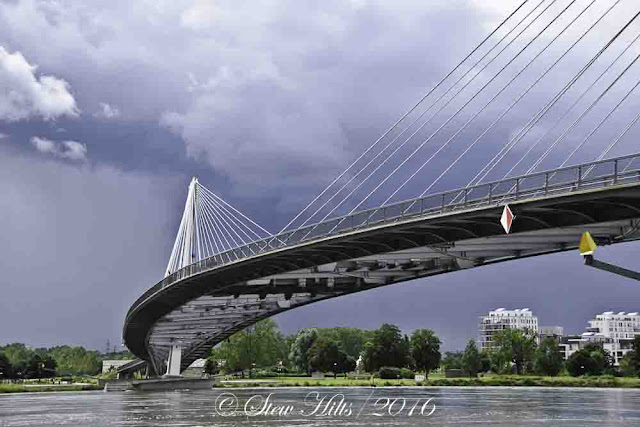 Lots of interesting bridges, this one with a double span for vehicles and bikes.  Most are a lot lower, and the wheelhouse will actually sink down into the second floor of the ship to scrape under the lowest ones.  With very high water levels as we had, that was essential. 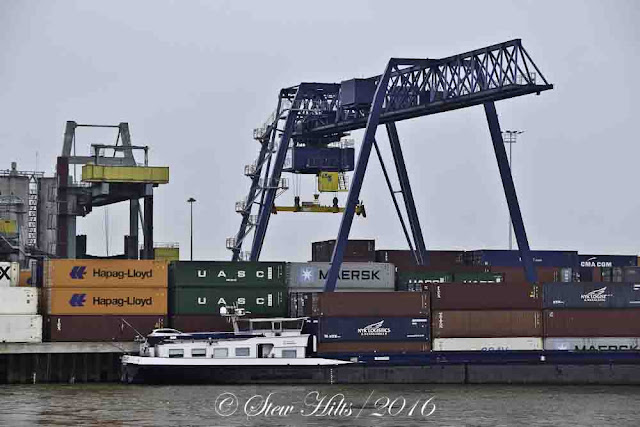 In the lower stretches of the river there was lots of industrial traffic, most of it low barges, also designed to go under all those low bridges.  I think there are seven approaching us in this picture.  As you can see we had a lot of cool rainy days; there wasn't much blue sky! 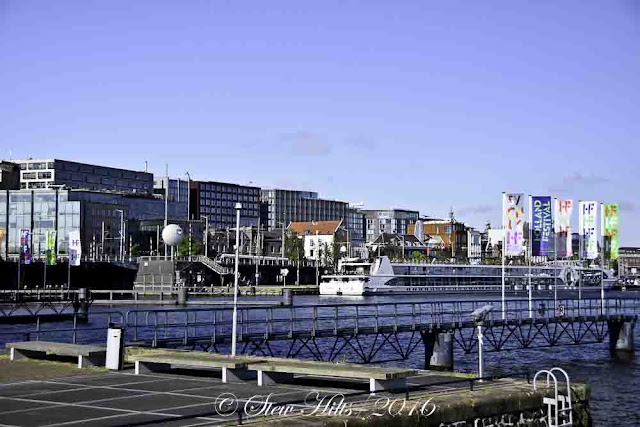 At least not until we got to Amsterdam, the end of our short 6 days.  We stayed an extra couple of days, intended more as a rest break, but we were up and out the entire time.  Amsterdam is just a wonderful city! 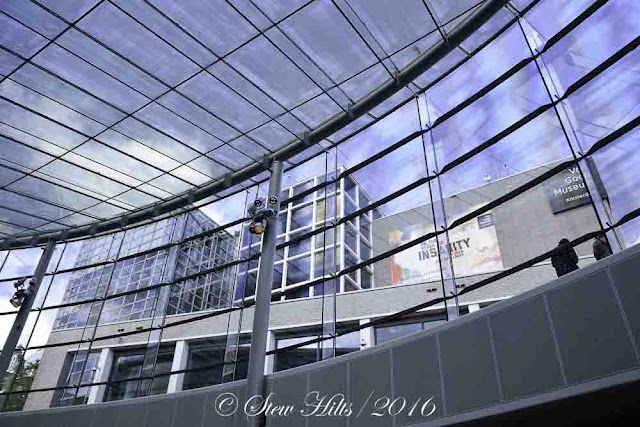 One highlight for us was the Van Gogh Museum.  Having seen some of his greatest works at the Musee d'Orsay in Paris two years ago, we really enjoyed this gallery.  It contains the collection of his works that his own family retained, and is organized to tell the story of his life. 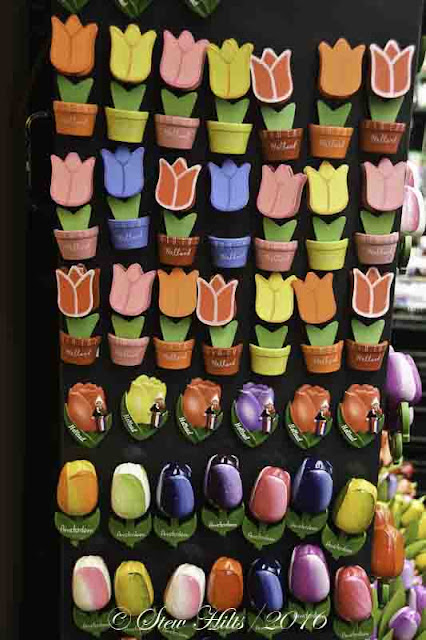 We visited both the famous Flower Market, and the Botanical Gardens, one of the oldest in the world.  I never saw so many wooden tulips in my life, but they were colourful!

I mentioned we were a bit disappointed in the river cruise.  We did enjoy it of course, but it just wasn't the right fit for us.  Inevitably we compared it in our own minds with the other two organized tours we've done, an Adventure Canada cruise around the outer islands of Scotland, and a Smithsonian Institute tour of Italy,  All three were approximately the same total price, but the other two had a much stronger educational element, which I naively assumed would be included to some extent on this trip.  It wasn't.

The other trips were also longer, the Italy trip nearly 3 times as long, so the price per day was dramatically different.  And they were also much smaller groups, so we found the 180 passengers made this a big ship; for most it was a small ship in comparison to the ocean cruises they were used to!  For us, the river cruise just wasn't worth the price we paid.  Most of our travelling has been on our own, and in comparison, this trip was rather dull!  But wait til you hear about the second half of our trip - it was worth every moment!