Our four-week blogging break was an adventure touching down in 6 countries in Europe, from England to Italy.  We travelled by plane and train, by tram and tube, by boat and ship, by bus and taxi, and a great deal of shank's pony!  And we're now safely home, with 3000+ photos to sort! 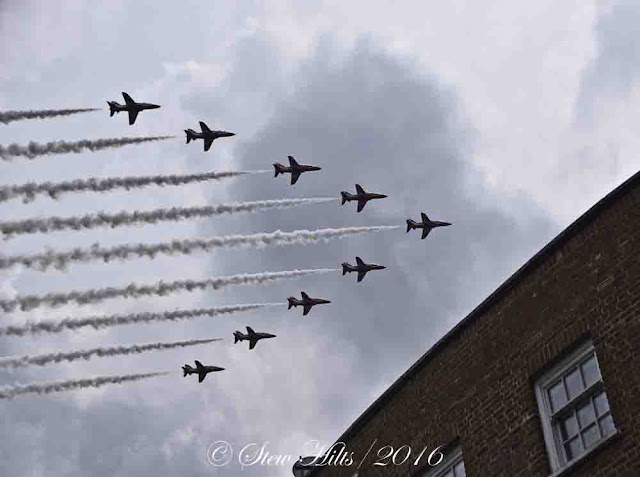 No, these aren't the planes we rode, though there were five flights.  We were in England on the day of the Queen's 90th Birthday, and heard a plane roar low overhead.  I raced outside into the street in time to see some of the planes that were part of the birthday flypast.  These are the nine Typhoon Fighters in tight formation that spew red white and blue exhaust as they fly over Buckingham Palace. 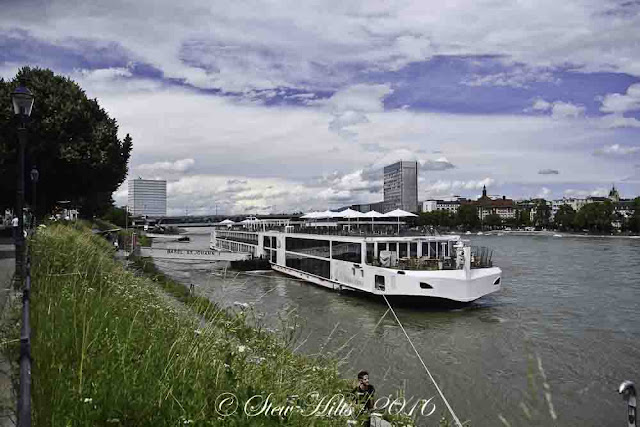 The core of our expedition was a river cruise down the Rhine River, in two different (that's another story) purpose-built Viking ships - long and low to fit under the bridges.  To be honest, we were a little disappointed in this part of the adventure, but I'll tell you why later. 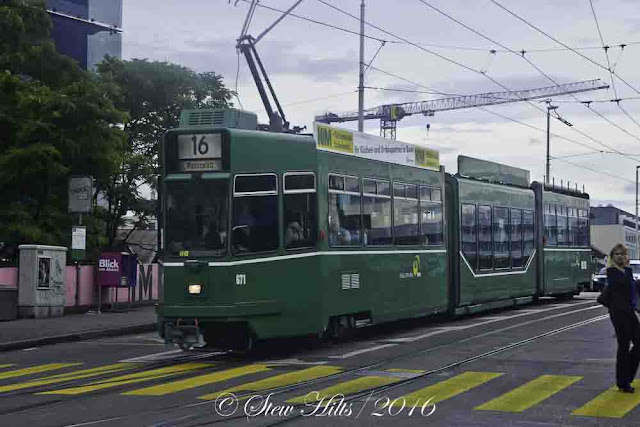 Meanwhile, in the cities we visited along the way, we often got around by tram (and in London by tube).  This is one of the older trams in Basel, Switzerland.  They seemed like such an easy, convenient way to get around, and we were reminded again how North American cities are so hopeless in comparison! 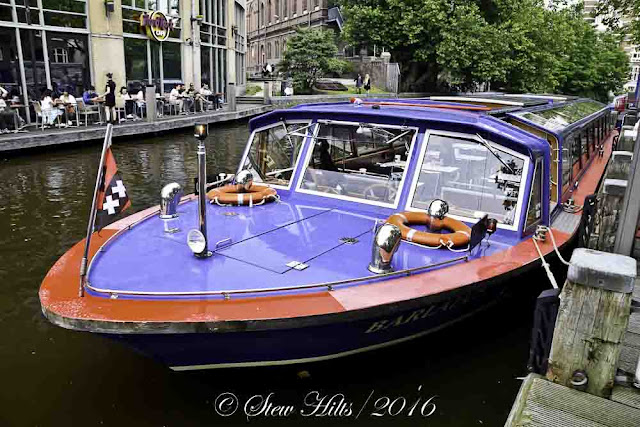 The cruise ended in Amsterdam, a wonderful city, the older part ringed with networks of canals.  This is the canal boat we cruised around the city on.  Amsterdam also has more bicycles than people, and bikes appear to have the right of way over every other way of getting around!  They tell the tourists to 'watch out for the killer bikes'. 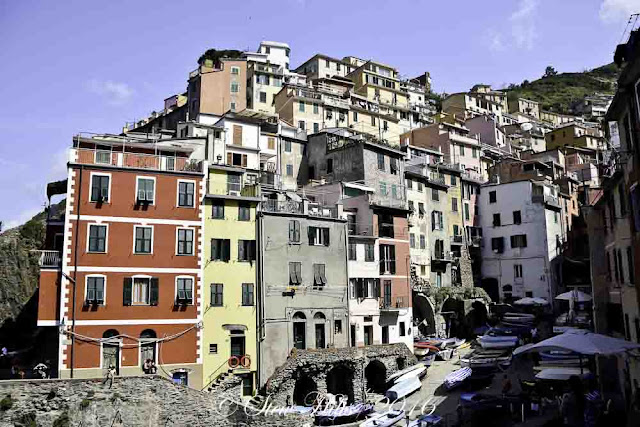 After that it was off to Italy, for an extended few days in Florence and Venice - Florence the home of the Renaissance, and Venice perhaps the most unique city in the world.  This is one of those colourful villages built into a mountain valley in the 'Cinque Terre' - beautiful but crowded! 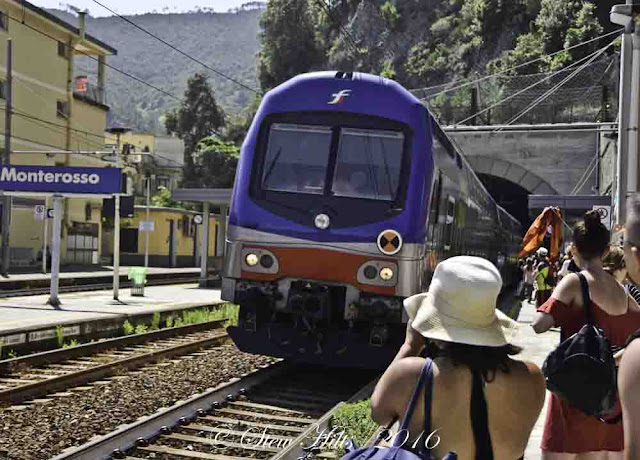 And this is the train that visitors use to get between the villages along the coast, travelling mostly in tunnels.  The train platforms were a crowded zoo of anxious tourists! 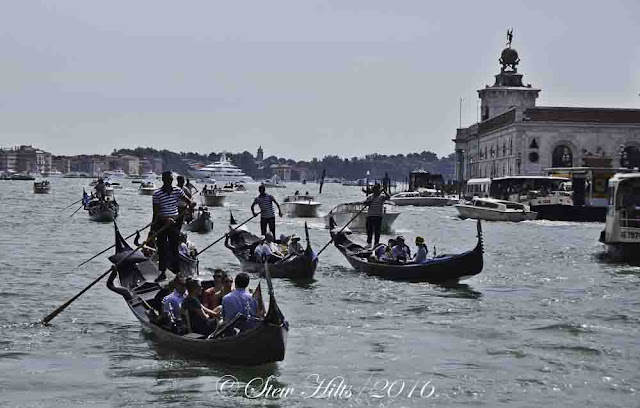 And then there's Venice, a city with no cars!  The traffic of boats gets pretty busy sometimes, and we truly wondered how there weren't more accidents.  And no, we didn't take a gondola ride.  Nor did we ride in the luxurious super-yacht you can see docked in the distance! 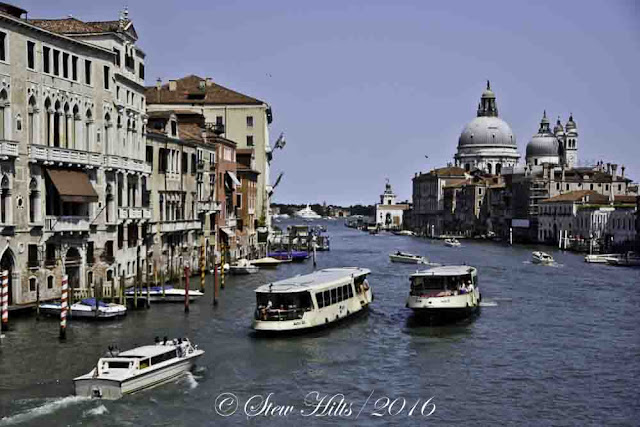 But we did ride the 'vaporettos', the local water buses, which slowly grind their way between stops along the Grand Canal, and around the outer shoreline.  It's a wonderful system, but at peak tourist times, extremely and unpleasantly crowded.  We wonder how the local residents put up with it 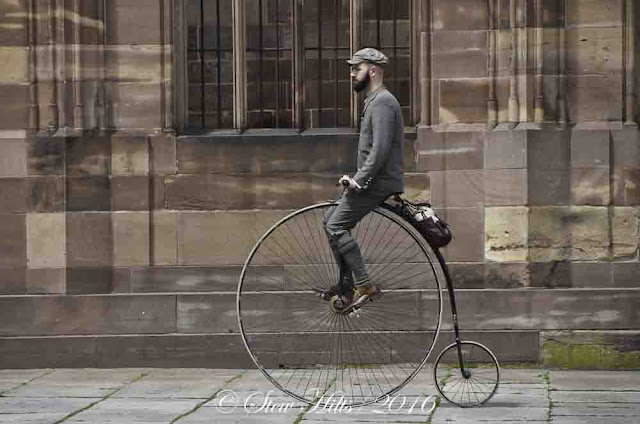 This is about the only form of transportation we didn't use, but we saw this fellow, dressed very appropriately, cycling past the cathedral in Strasbourg.  I still don't know how you could hop on and ride one of those! 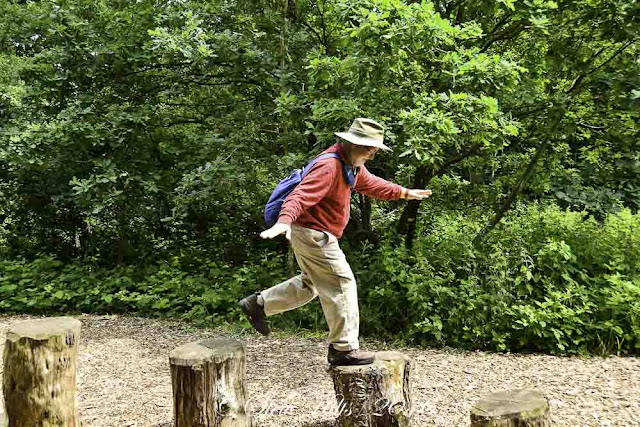 And I got to visit the childrens' life-size badger sett and log walk at Kew Gardens.  I thought I fit right in with the other four to ten year olds, at least in my childish enthusiasm.

It was a great trip in many ways, but being a tourist has two sides to it too.  I'll fill you in a bit more over the next few days, but I'll probably save a lot of the pictures for next winter when I run out of photography subjects (and you'd get very tired of seeing pictures of old churches anyway).  I'm anxious to get back to photographing the passage of the seasons here in the valley - we've missed so much.

Google cut me off from reading and commenting on blogs while there, because it discovered someone using my password trying to sign in from Europe!  I guess they never thought it might be me.  And the instructions for getting a security code to re-access my account were by that time in Dutch or Italian.  Sorry, but I eventually gave up (and I was too exhausted from the sore feet at that point anyway).  I have a lot of reading to catch up on.  Thanks for visiting.