The Corran, the ruined mansion we found in the Spirit Rock Conservation Area, is a fascinating place.  It brings to life a picture of life in the late 1800's here, that is such a contrast with today.  These historical buildings in the landscape that reflect a vanished past always give a deeper picture of what you're seeing today. 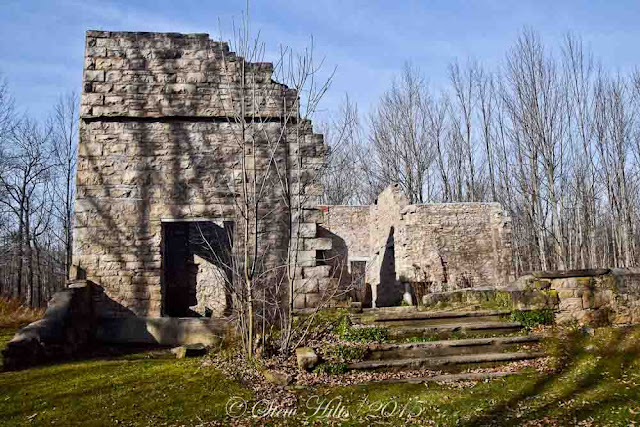 This was the original front of the house, facing the cliff and Colpoy's Bay about 100 yards away (but now all regrown in trees).  These steps were the main entrance, and there was a front porch, including a conservatory on the left. 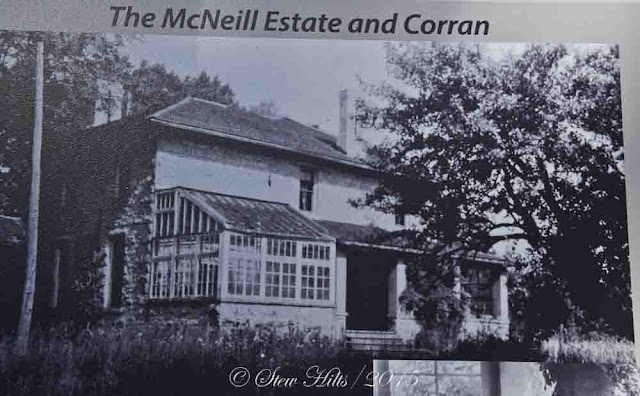 And here's a historic picture, taken from the display board, showing the same view of the house before  it started to go downill.  It was built in the late 1800's by Alexander McNeill, and his wife Hester.  She was really the reason for the mansion. 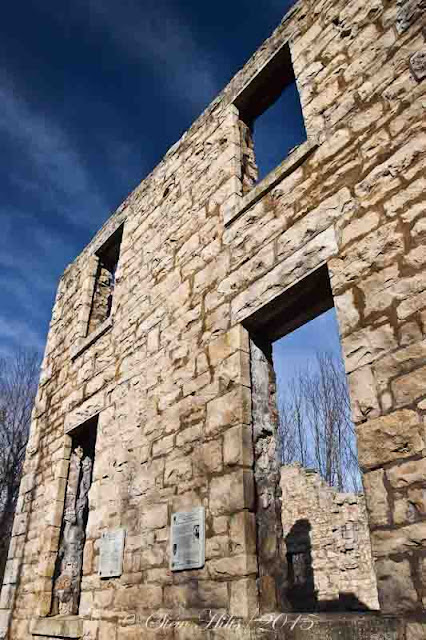 Inside this wall on the main floor was the library, and on the outer wall are two information plaques, one a floorplan of the house and the other some historical details.  Inside the library was apparently the largest collection of books north of Toronto at the time, according to the plaque below. 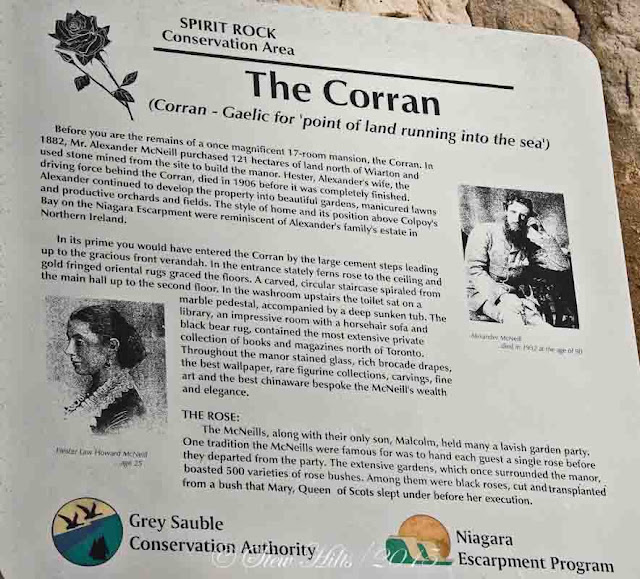 The description makes it sound like a grand mansion indeed, with large garden parties, and features such as stained glass, carvings and good china in the house.  Apparently there was an amazing collection of rose bushes on the grounds. 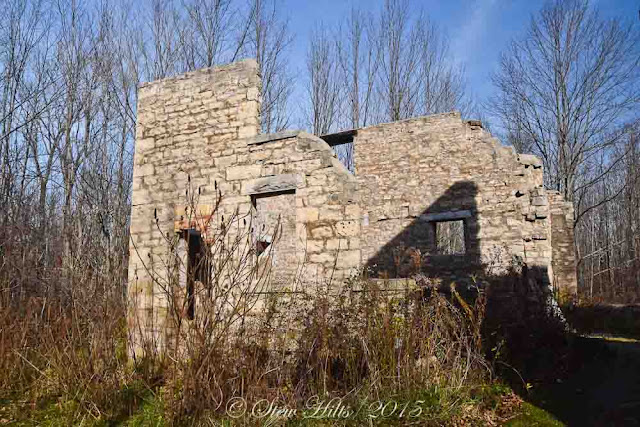 This back part of the house was the kitchen.  Undoubtedly there was a group of servants who allowed the owners to live a life of luxury.  There are a number of places where you can see evidence of old fireplaces or chimneys too. 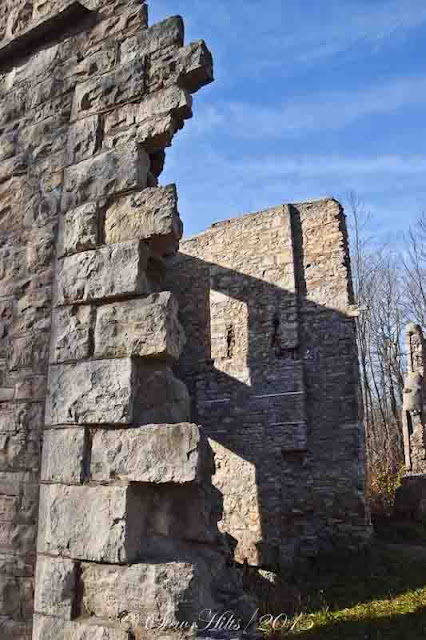 I was really impressed with the stonework, parts of which have held together well.  The limestone blocks were quarried on the site, and there would have been numerous stonemasons available to do such work among early Irish and Scots immigrants to Ontario.  In the shadowed part of this picture there was also a grand spiral wooden staircase to the second floor. 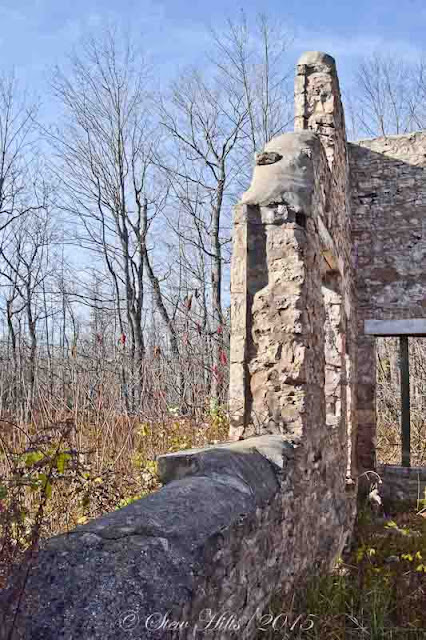 As is typical of old buildings on public land where there's an effort to save the ruins, the walls are capped with cement to stop frost damage, and prevent further deterioration.  Most of the old buildings I've seen this on though are old mills, not houses.  The house still had a roof, but was otherwise abandoned and in poor condition by 1974, and then there was a fire in 1976.  You can see how the cut stone blocks were just an outer facing, as we use brick today, with rougher stone used for the interior wall which would have been all plastered and wallpapered. 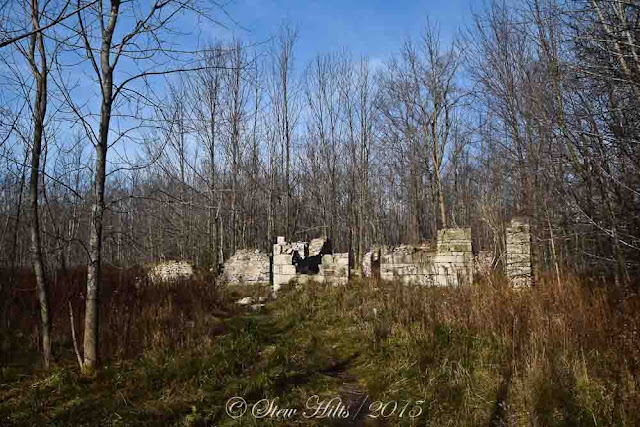 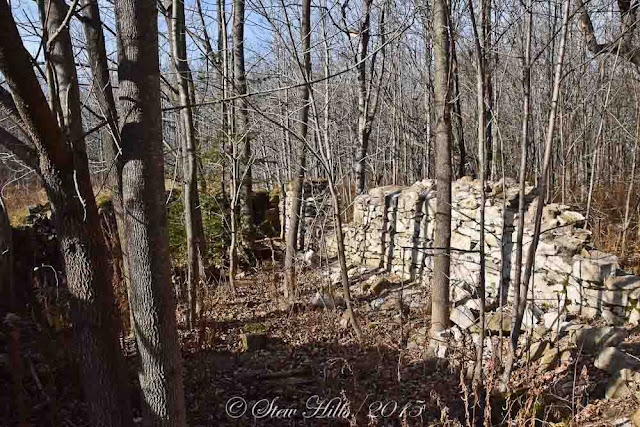 If you look at this, you'll get some idea of how long it's been abandoned, with the trees growing inside it.  At least 40 or 50 years I think. 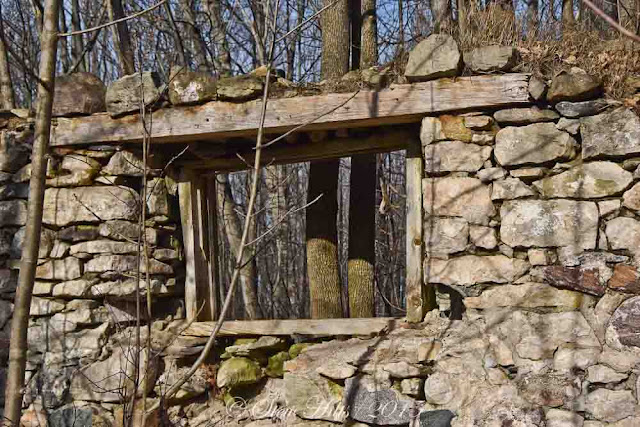 The stonework of this building is not nearly as carefully done as is the house.  It's much more reminiscent of barn foundations I've seen, whereas the house had that outer covering of cut stone blocks.  For some reason I'm always fascinated by window and door frames in these old foundations. 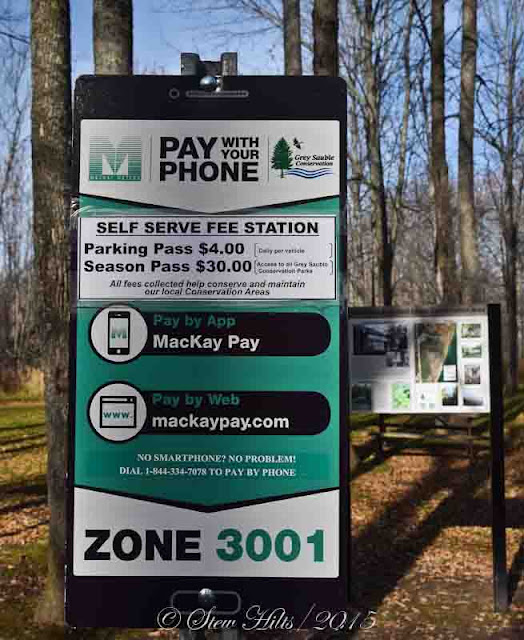 Out in the parking lot, we found this request for a fee from visitors using the parking lot in the summer.  I've never before seen the opportunity to use your smartphone to pay admission! 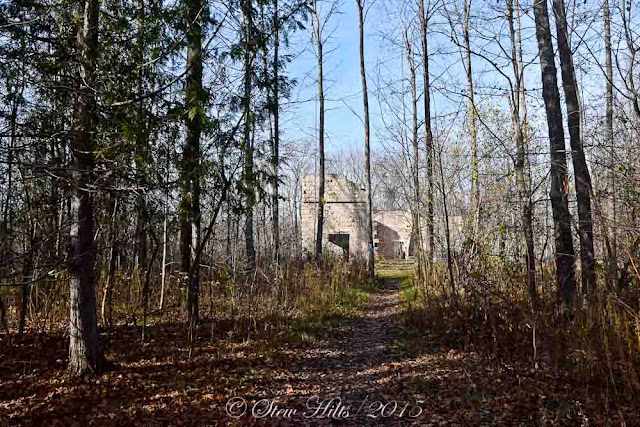 Eventually, after my partner thought I had enough photos, we headed back to the main trail and north to the cars.  This was our final view of The Corran through the trees.