I'm a volunteer Land Steward for the Bruce Trail Conservancy, which means that I'm responsible for keeping an eye on a particular property that the trail goes through.  I don't do trail maintenance; that's the job of the Trail Captain.  But I keep an eye on other things like boundaries, garbage, rare species, and invasive species and so on.  So last week I spent two days out in the bush documenting what I saw this year. 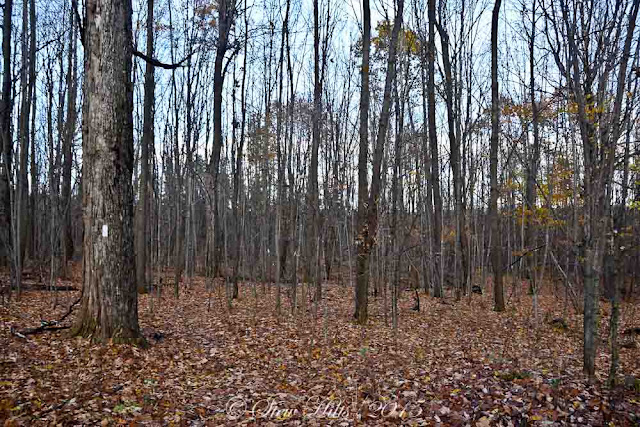 It's a nice section of trail, through a good deal of hardwood forest on this property, as well as some scrubby old apple trees and such.  Not many leaves left on trees now - it is November! 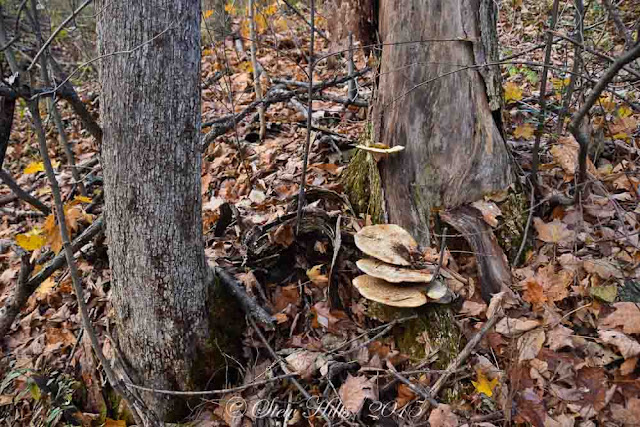 There were mushrooms on a number of trees and stumps. 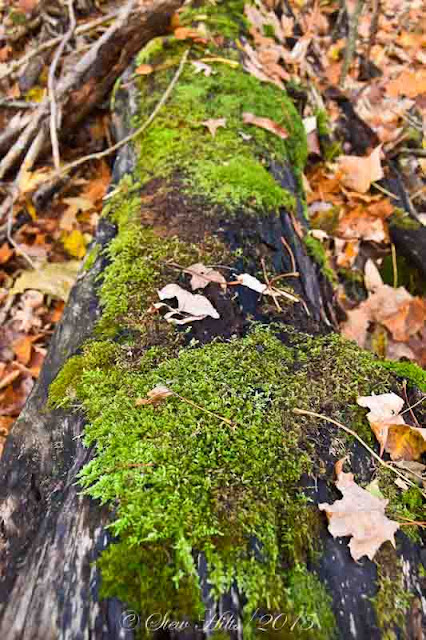 And lots of fallen logs or stumps covered in green moss of various sorts. 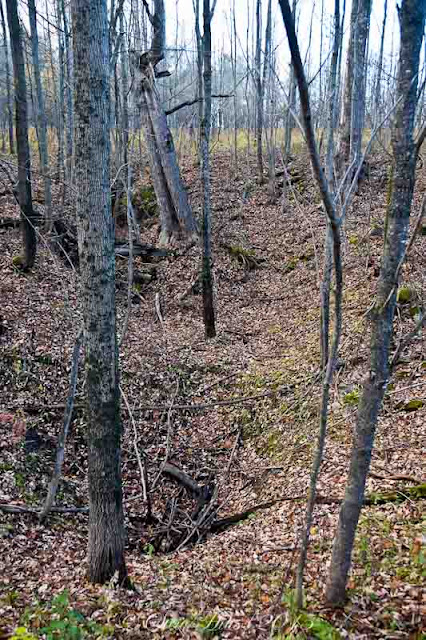 But what interests me the most is the sinkholes.  These are dry sinkholes, though there may be a little surface runoff in the spring.  The entire depression you see here is perhaps 60-70 feet wide, and 20 feet deep (and slowly getting deeper).  Not very bright pictures, but in fact it's the best time of year to see the sinkholes, because the leaves are all gone. 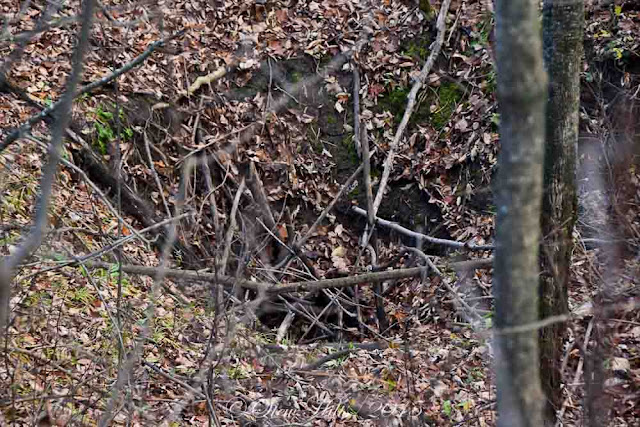 At the bottom of that depression is an actual hole in the ground, where soil continuously drops down into a cavern or crack in the limestone below.  There is presumably an underground drainage channel that is carrying a stream of water beneath this sinkhole, taking that soil away.  There is no way of knowing where it's a large cavern that you could fall into, or whether it's just a narrow crack in the rock. 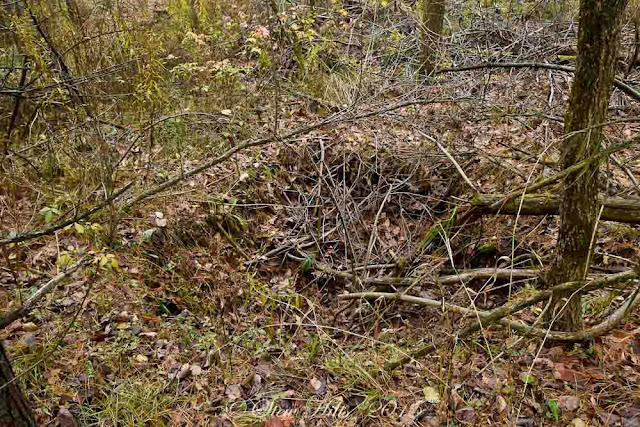 And here's another much smaller sinkhole, just an abrupt depression 3 feet deep and 8 feet across at another location in the property.  I amuse myself by wondering where these underground streams come from and go to. 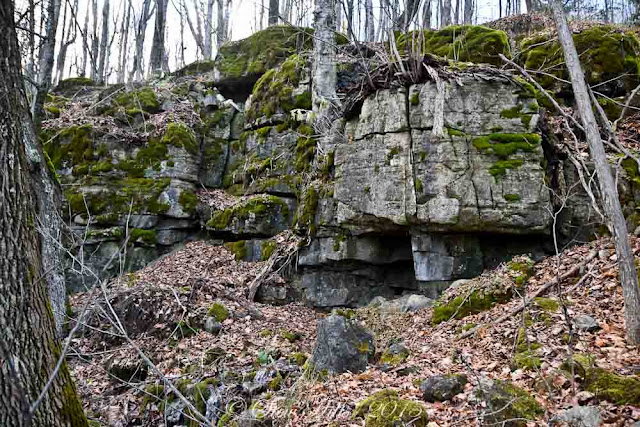 Well, you can see where one of the streams goes to.  Just across the road, but below the cliff, a tiny stream emerges directly out of the rock, flowing from the direction of that big sinkhole. 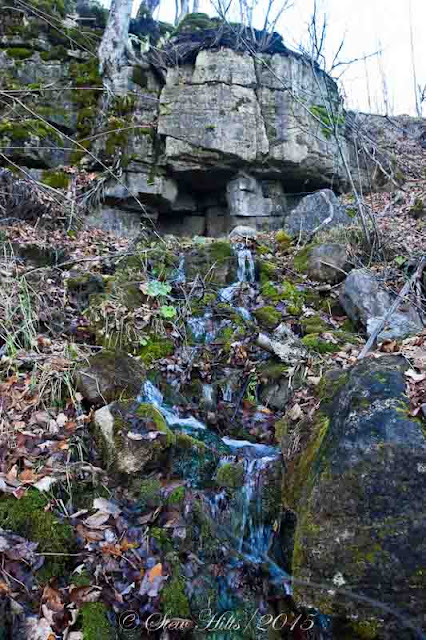 This is Jordan Springs, another Bruce Trail property.  Based on my visits, I'd say that this stream flows steadily all year round without much change.  So on the surface there's not much water on this property, but underneath, there's a mysterious network of underground channels. 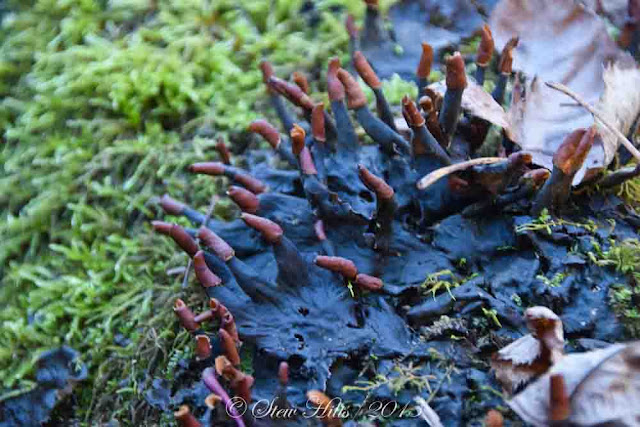 Right beside this spring I found one of the most unusual fungi or lichens that I've ever seen - a black rubbery mat on the moss, with short black spikes standing up, capped with tiny reddish-brown 'hats'.  I've simply no idea what it is - any suggestions?

We've had a wonderful warmish sunny day, and we're in for three more days of it according to the forecast - unheard of for the first week of November!  So I used it to finish up cleaning the yard and packing up the shed for the winter.  Some years we've had snow this week that stayed til March!  It's a true Indian Summer, so I may get some more useful outdoor work done before the end of the week.  It's also deer hunting week, so the guns are going off in the distance.  But I know the hunters would much rather have cooler temperatures than this for hunting.  In the meantime I'll stay out of the woods, and wear my hunting hat this week! 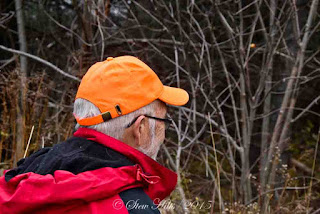