A week ago a friend and I hiked into the Spirit Rock Conservation Area on the Bruce Trail, just north of Wiarton.  We never actually did get to 'Spirit Rock', but we had a great walk and saw some really interesting features of this unique property. 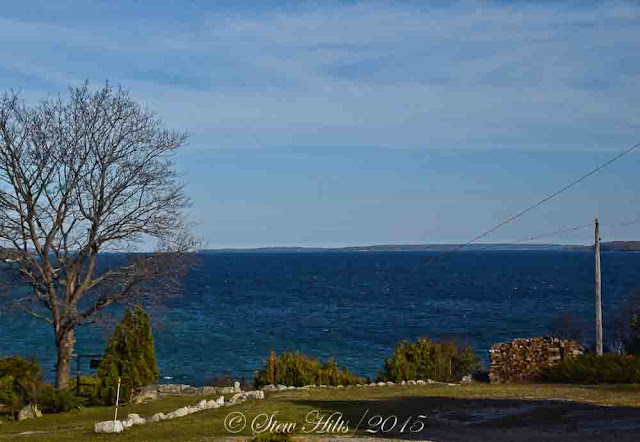 The entrance at the Conservation Area was closed for the season, so we drove around the corner to the view over Colpoy's Bay, where the Bruce Trail crosses the road, and headed south. 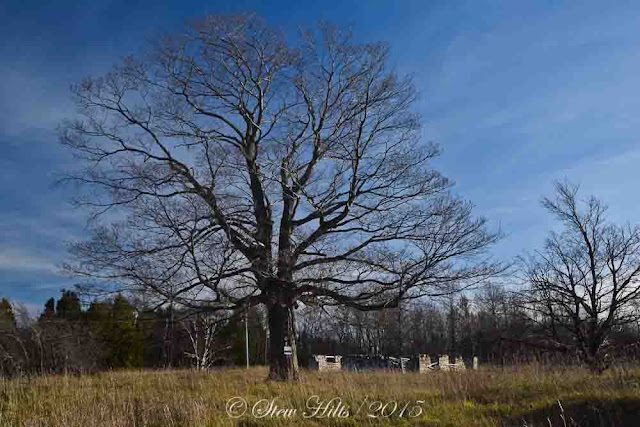 We walked in past this beautiful huge old Sugar Maple, and the barn foundation beyond, on an old farm property now owned by the Bruce Trail Conservancy. 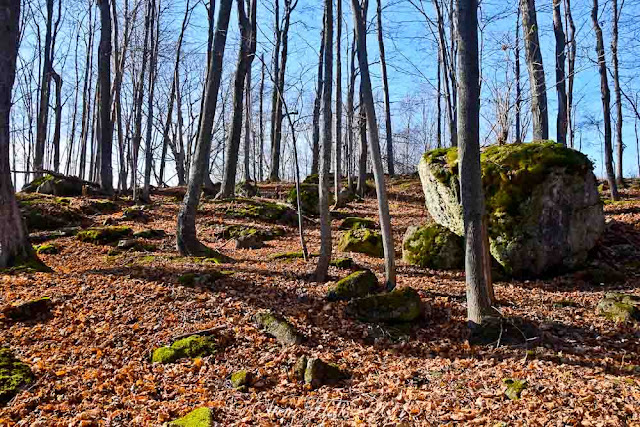 We soon came to a small patch of woods that had obviously been grazed in the recent past, not a single sapling or seedling to be seen - even though this is right at the edge of the cliff.  My hiking buddy was really impressed with this big limestone erratic, which he lovingly described as a 'monadnock'. 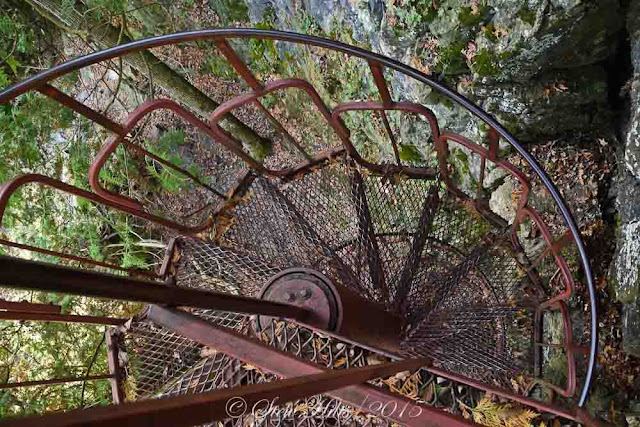 After a fair walk, we came to a spiral staircase down the cliff!  I'd heard about this, but never seen it and certainly not used it, so it was fun to wind our way down, around two complete circles, to the bottom.  There was still a big chunk of rocky talus slope to work our way down to the shoreline. 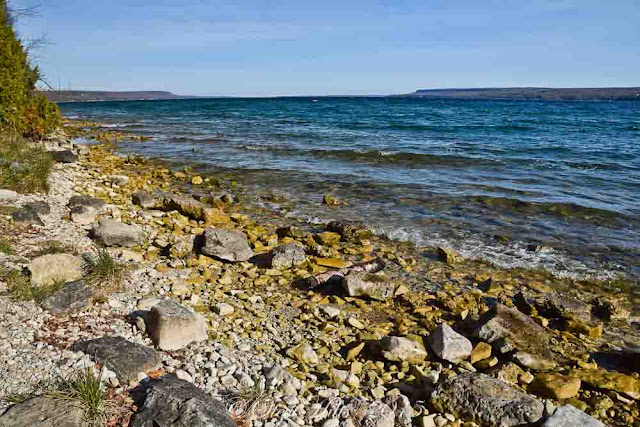 The shoreline was spectacular, and the weather was spectacular too, one of the nicest days I can ever remember in November.  The trail follows the shoreline south toward Wiarton, and I got several pictures looking out the bay to the northeast. 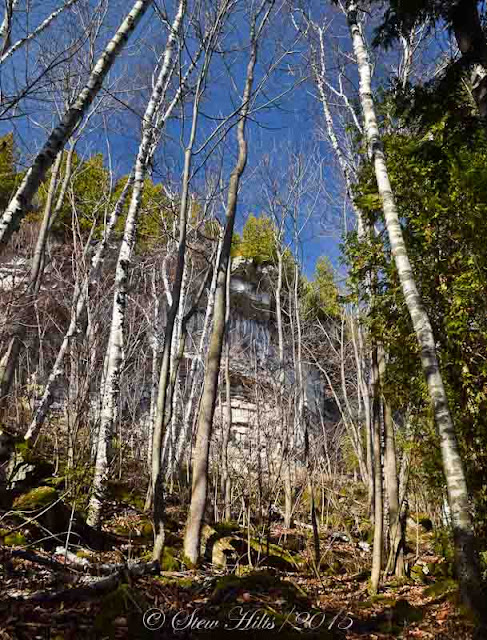 Behind us, the limestone cliff towered up against the blue sky.   Spirit Rock is a lookout on this cliff where an Indian maiden is said to have thrown herself to her death when not allowed to marry a warrior from another tribe. 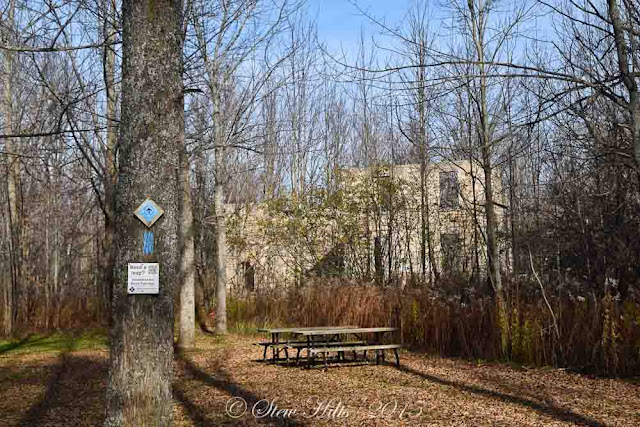 We never got to Spirit Rock because we interrupted our hike to explore the 'Corran', an old stone ruin seen looming through the trees along the trail here. 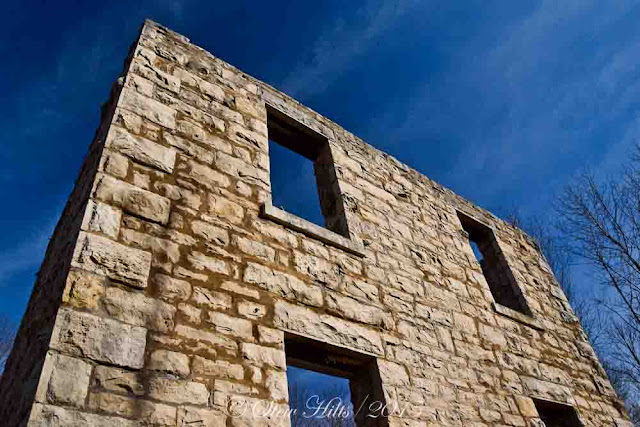 The Corran was a huge stone mansion, built during the 1880's by Alexander McNeill, and named after his birthplace in Ireland.  As a ruin it has been stablized, and you can wander what were once the rooms of this remarkable house, now standing in the middle of the woods.  I'll give you some details and more pictures tomorrow. 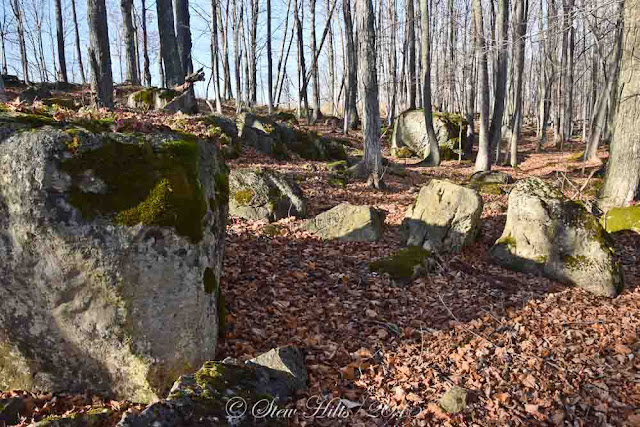 After nearly two hours (my hiking buddy is very good about finding me photographic opportunities), we headed back north to the car, passing by that erratic we saw earlier.  By now the 'monadnock' had morphed into a small field of 'multiple mini-monadnock's' according to my guide (who obviously isn't a geologist!).  But he led us on a great hike, and we'll definitely be going back here.  I still have to see Spirit Rock.