I think shifting into renewable energy is one of the most important things we need to do as a society if we are to avoid climate change catastrophe.  If we are to avoid losing southern Florida, to say nothing of low-lying other parts of the world, to avoid crippling drought making areas uninhabitable (perhaps parts of the western U.S.), and other crises in the future, we are going to have to reduce carbon emissions.  There is no other choice. 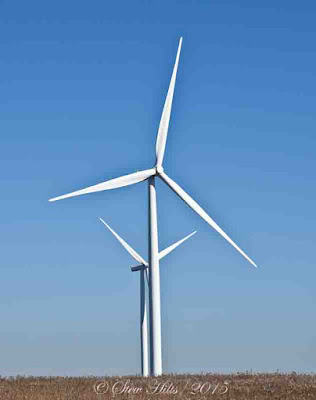 But there are many choices about HOW we do that.  I'm currently reading the National Geographic article on efforts to move to renewables in Germany.  It's well worth reading, if only for the optimism it portrays.  In fact the entire current issue on Climate Change is worth reading.  Germany now generates 27% of its energy from renewables such as solar and wind (twice the U.S. rate), and aims for an astonishing 80% by 2050.  They are also vowing to close all nuclear power plants by 2022.  And there is a 90% public approval rating for this fundamental shift. 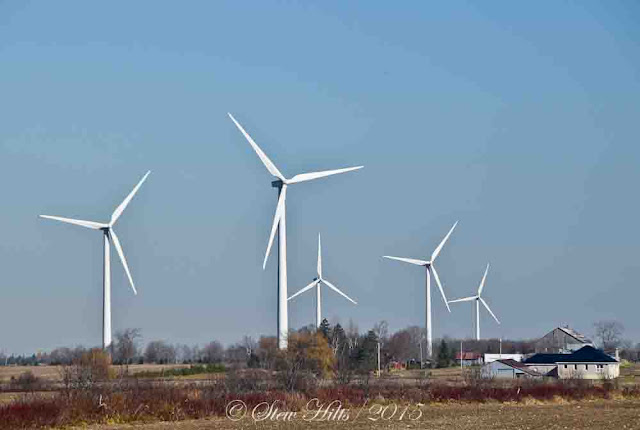 I'm well aware of all the controversies over wind power, which is the renewable energy production that we see most of driving around southern Ontario.  About 30 minutes south of us is the Melancthon Wind Farm, with 133 turbines.  It's created a surreal landscape, especially at night, when all you see are the twinkling red lights on each tower. 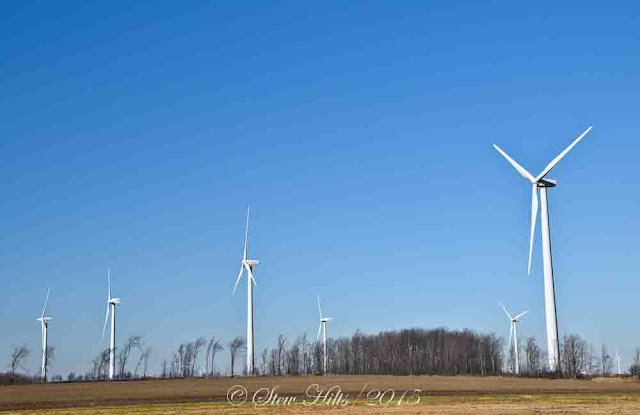 I actually find the turbines interesting and attractive, but I don't live near one, and I can well understand how someone who is sensitive to low frequency noise or vibration would feel.  I think the studies that claim there are no health effects are based on a misunderstanding of science - to be more scientifically accurate, they should say that 'statistically, 95 out of 100 people will feel no negative health effects'.  We tend to forget the other 5%, and most statistical tests are based on a '95% confidence level'. 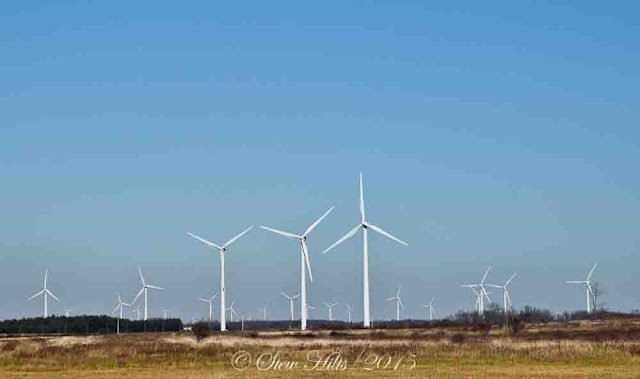 On the other hand I know from the broader society's perspective, we need to move in the direction of this and other renewables.  It's the old broader common good vs the individual again, but as the planet gets both more crowded and hotter, some tough decisions are going to have to be made!  How many turbines can you count here? 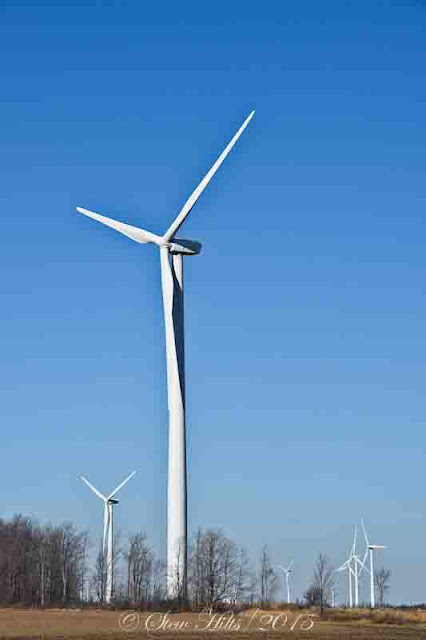 In the meantime, these wind turbines have made an enormous impact on the rural landscape in a few parts of southern Ontario, and I'm sure elsewhere in North America.  I'm not going to suggest what side of the coin you should choose, but I will suggest that you should educate yourself a bit about the implications of climate change and how we get our electricity. 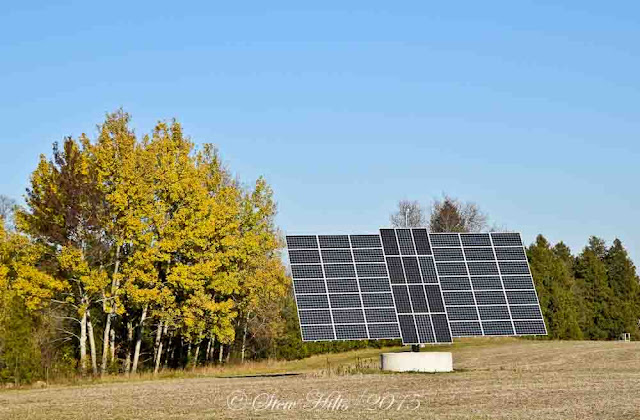 The second fairly widespread, but much more innocuous, renewable we see in the rural landscape is solar power.  Ontario's government put in place a set of incentives for farmers to install these large solar panels, and they have popped up in many places. 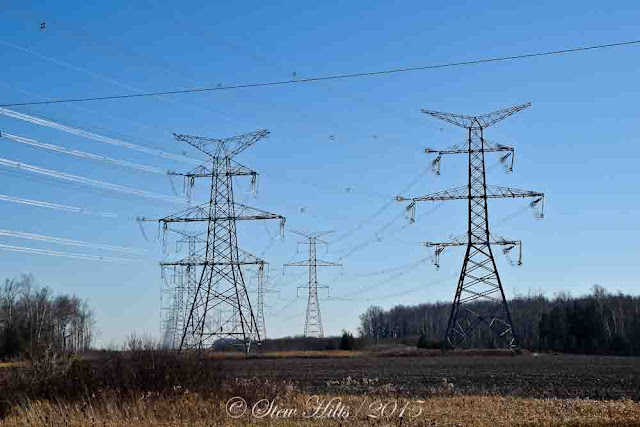 On the other hand, nuclear power still provides the backbone of electricity in southern Ontario (36%).  This is the main transmission line from the Bruce Nuclear plant to the Toronto region, a transmission line we also see driving up and down from further south in Ontario. 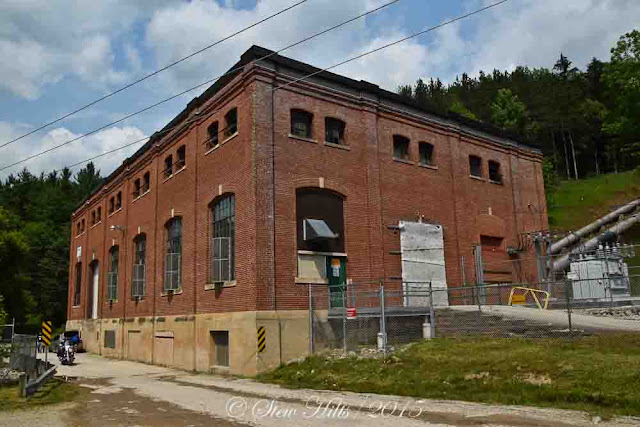 But we tend to forget hydro-electric power and take it for granted.  This is the small Eugenia Power Plant just down in the bottom of the valley close to us.  It has the highest water drop of any hydro plant in Ontario and this week is its 100th anniversary!  Hydro provides 22% of Ontario's electricity, with the largest amount coming of course from the plants at Niagara Falls. In Canada as a whole, the contribution of hydro-electricity is even more dramatic.  Overall, 58% of Canada's electricity was generated renewably from hydro in 2007, the most recent year I could find a figure for.  Only China exceeds this level among other countries.  Quebec, Newfoundland and Labrador, Manitoba, British Columbia and the Yukon all generate over 90% of their needs through hydro.  And I haven't talked about tidal plants or solar farms yet.  My interest arises through my interest in the rural landscape, but there are much bigger issues to be talked about as we shift to renewable energy in the future.  This picture is one of the generators inside the Eugenia Power Plant.

Good news!!  We finally saw my surgeon again today, and learned (surprise, surprise!!), that I don't need surgery, at least not for now.  Rejoice, rejoice!  (I'd put in a smiley face if I knew how, maybe several).  It's a complicated health issue, but we had been expecting further major surgery ever since my heart surgery of a year ago this week.  I didn't realize how much of a burden that had been on our thinking until today, when the weight lifted off our shoulders and we feel like we can start living again.  I may (or may not) need it in the future, but for now it's back to annual monitoring.  We had our travels for the next two summer planned by the time we finished the drive home!!