I was surprised to find several plants new to me at Bognor Marsh, plants which I had to look up, either to remember or to figure out.  Maybe I'm getting forgetful in my old age, but I do have quite a collection of field guides from my years teaching field studies at university, so I enjoyed making use of them.  Here's a report on some of the species I found; sorry, but this post is pretty long.  Any botanists among my readers, please feel free to correct me! 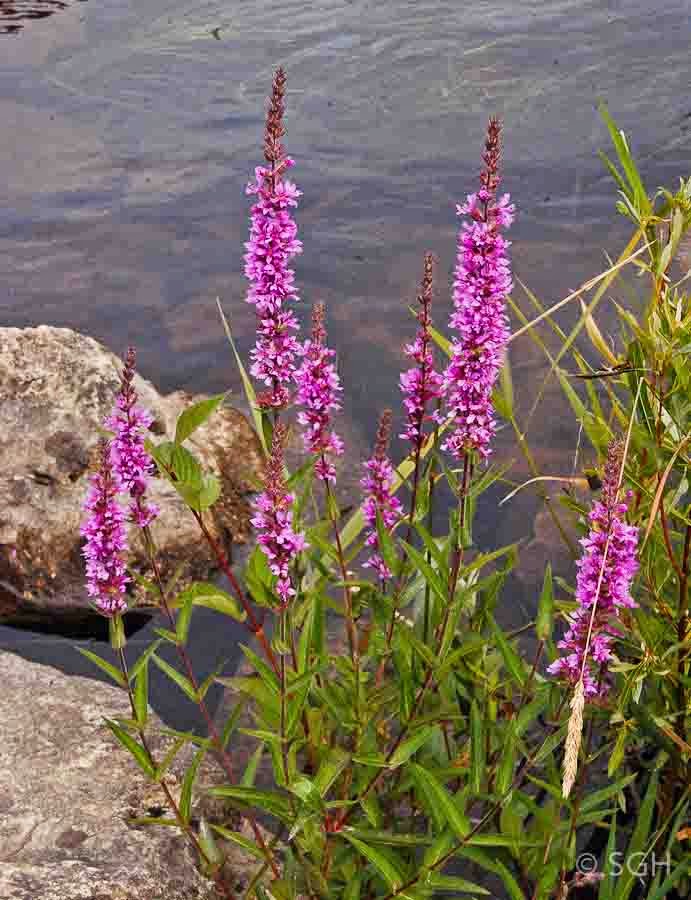 I did recognize this  one of course, the dreaded Purple Loosestrife, an invasive species that has caused a lot of trouble in wetlands.  There were two quite thick patches of it (below), but surprisingly it didn't seem to have invaded the main marsh, and we saw little of it beyond the first 50 yards. 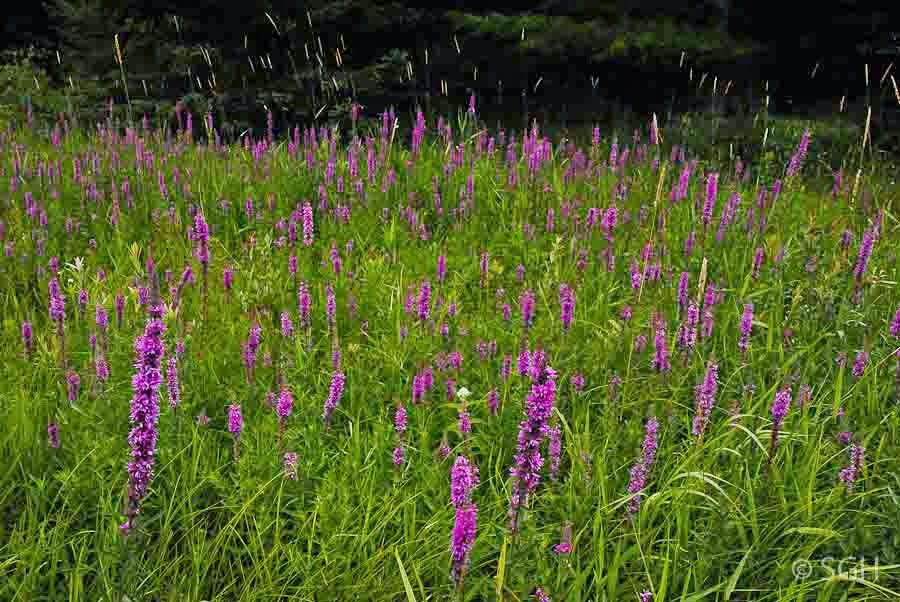 Then one of the interpretive panels explained that this site had been used in research based at the University of Guelph (where I used to teach), when a species of bugs was released to keep this pretty pest under control.  I hope it's working. 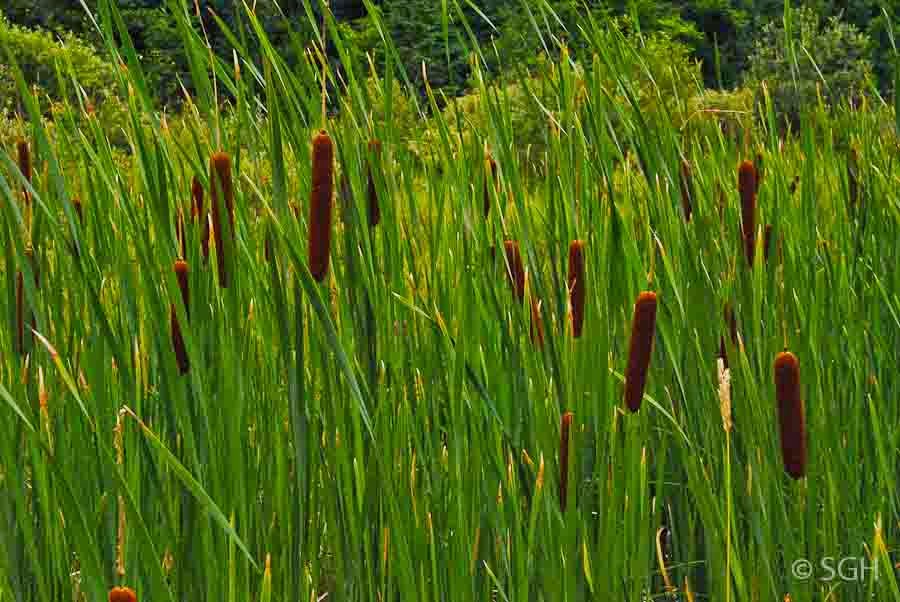 There were large patches of what I call bulrushes, correctly the Common Cattail. 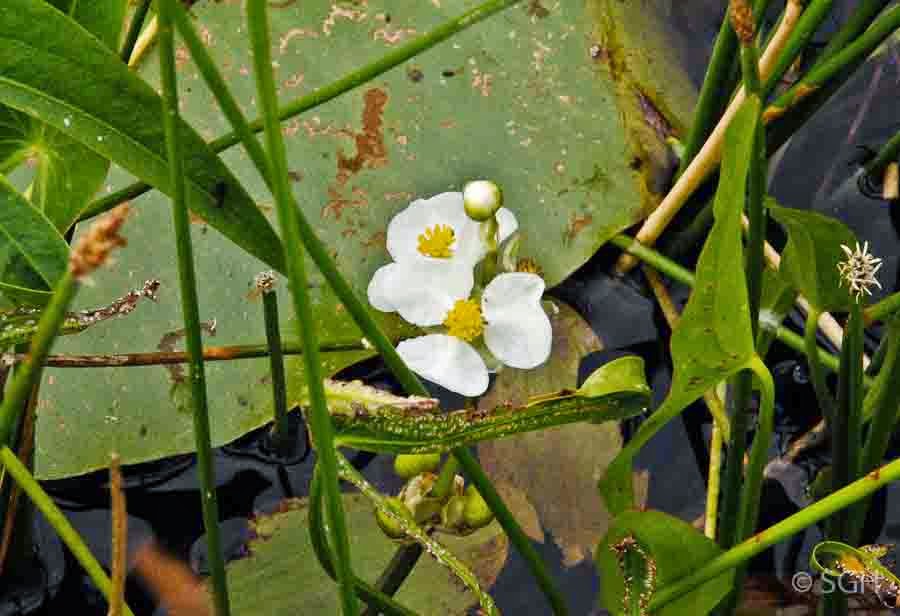 I did have to check this aquatic species though, which I should have remembered.  It's Arrowhead, named after the shape of its leaf. 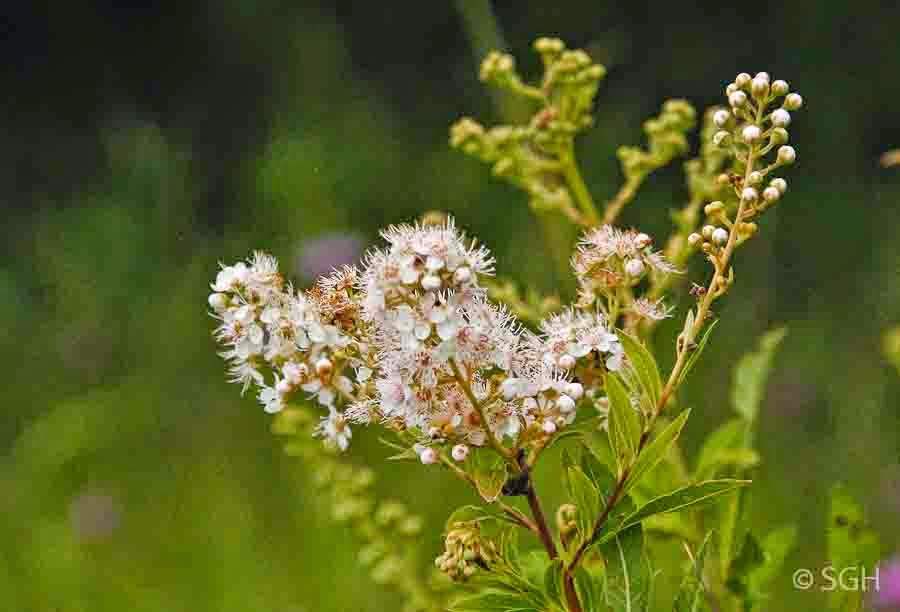 This is one of two shrubs I checked.  I thought at the time it looks an awful lot like a Spiraea bush, and it turned out to be Meadowsweet, Spiraea alba. 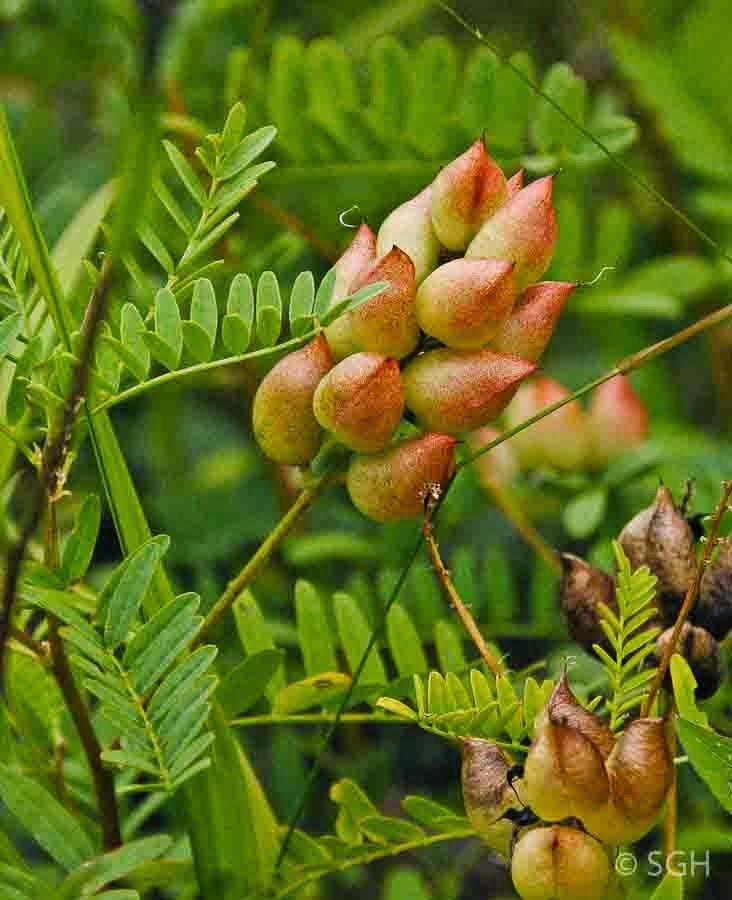 This one I'm still not sure of.  The seed pods look like rose hips, and the leaves look like a rose too, but it had no thorns.  Then I found Smooth Rose in the shrub book, so I think that's what it must be.  Anyone know?

Note, 2 days later - I'm assured that this is NOT Smooth Rose, but haven't figured out what it is; may have to just wait til next year and go back when it's in flower. 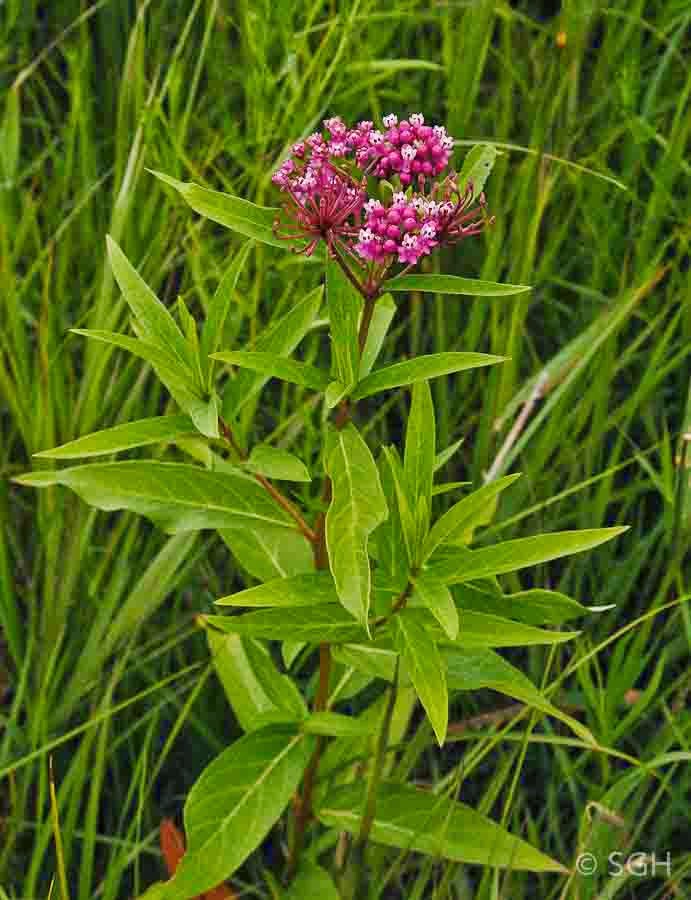 I just glanced at several of these plants as I passed, thinking they were Joe-Pye Weed, which is plentiful here and just coming into bloom.  But when I looked closely I began to wonder, and realized the leaf pattern wasn't right. 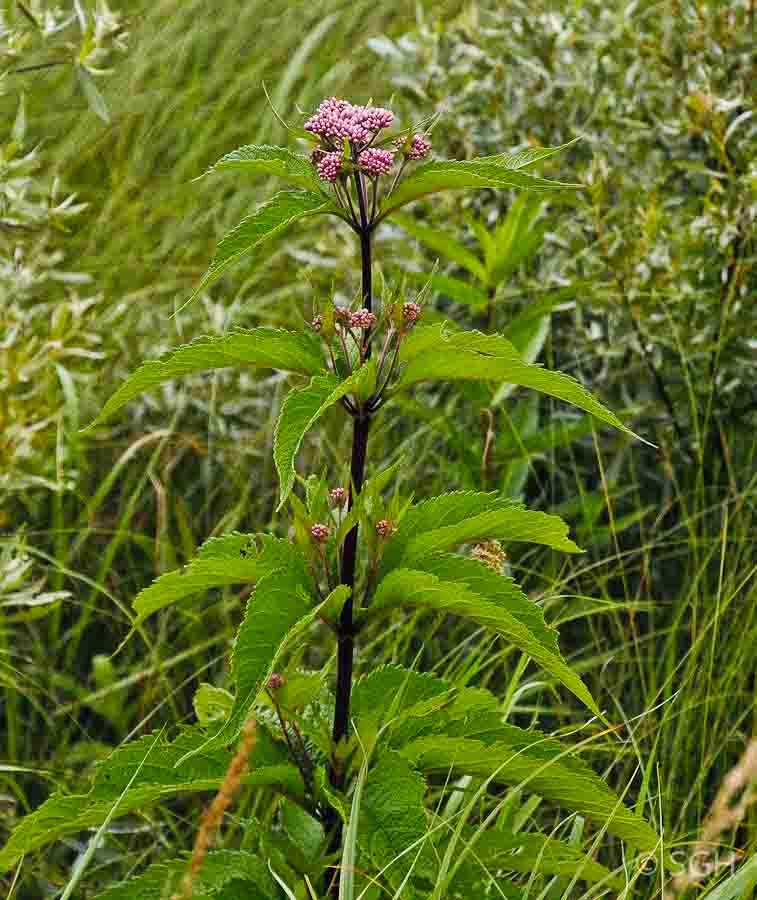 This one is Joe-Pye Weed, not quite in bloom yet, and you can see that the leaves come out in a unique whorl of five leaves around the stem. 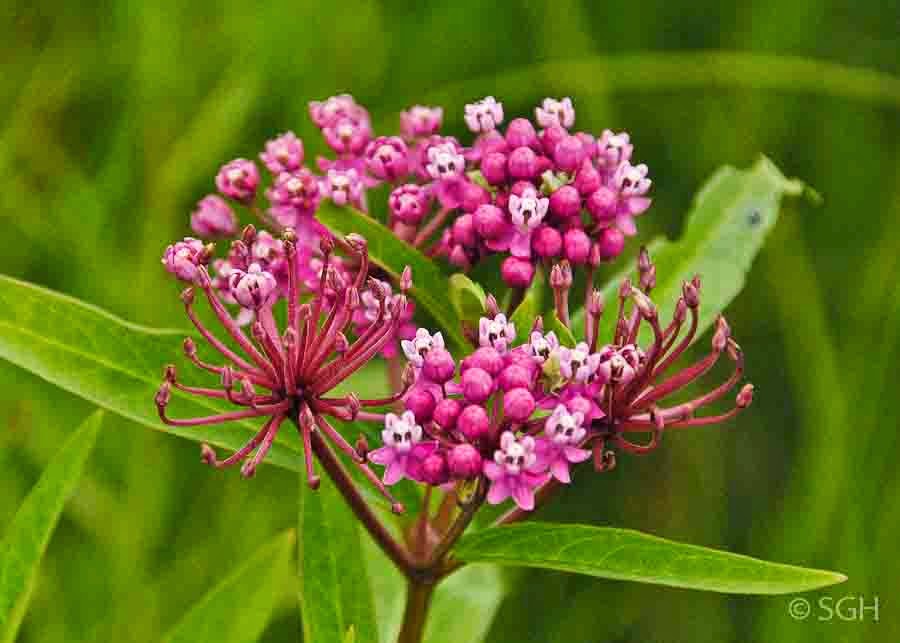 So I took a closer look and decided this was Swamp Milkweed, the first time I've knowingly identified it, though I suspect I've just missed it frequently before.  A very pretty colour. 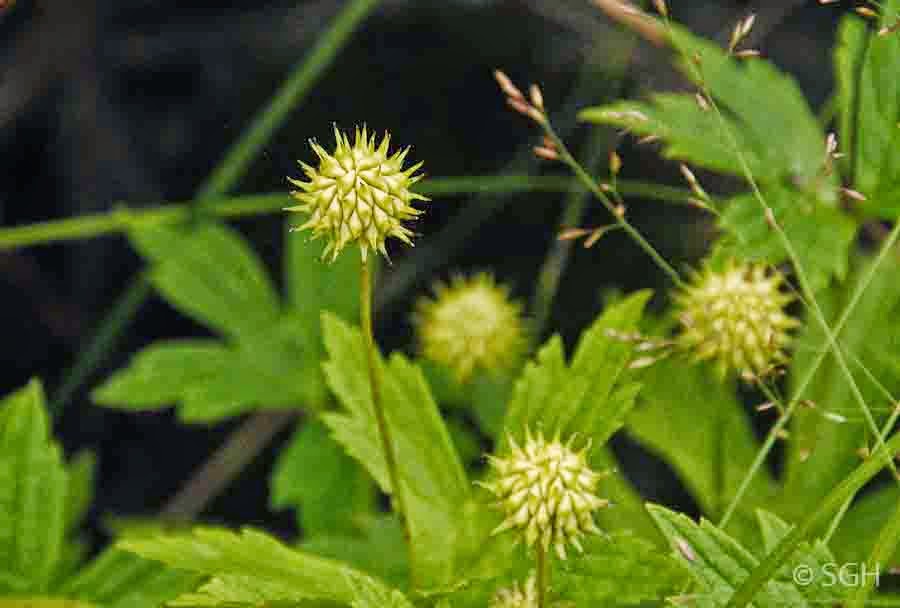 I didn't recognize these seeds at all, but when I looked up the leaf I realized it was Canada Anemone. 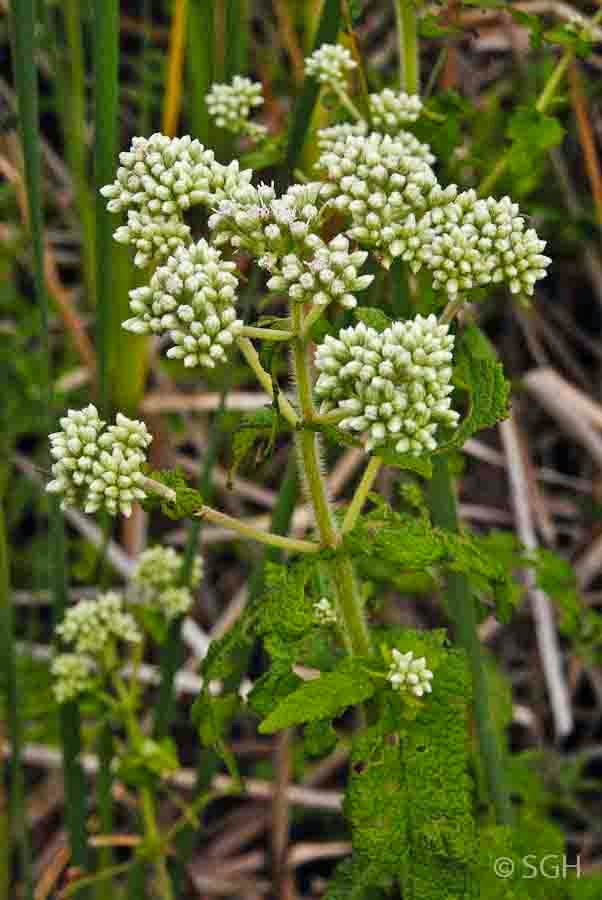 I should have remembered this one, which is Boneset, not quite in flower yet. 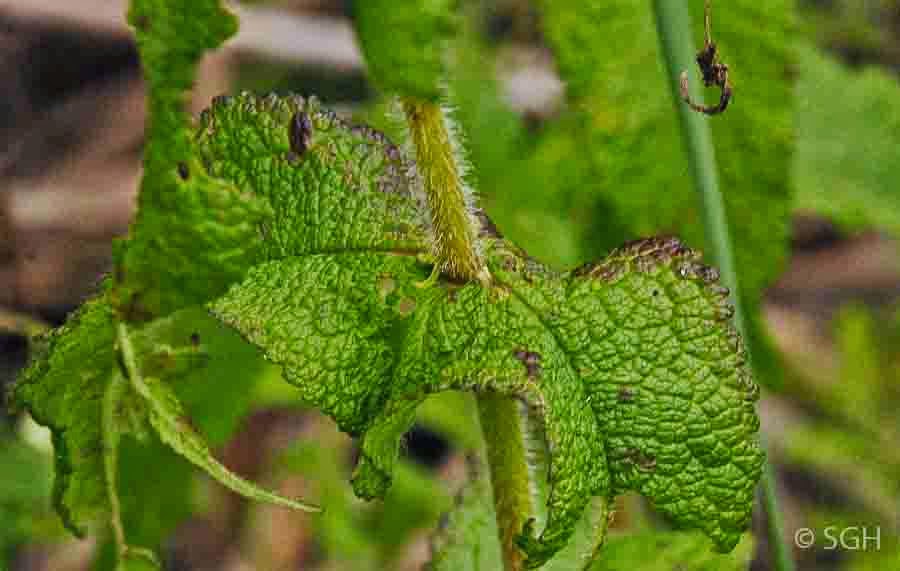 Once I looked it up, the leaves which meet and merge at the stem give it away. 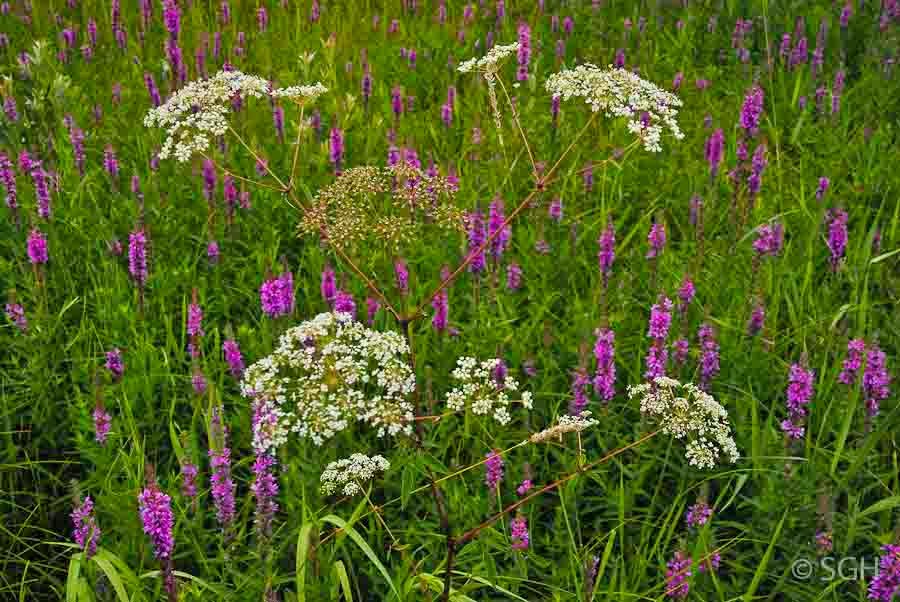 This is a new one for me, and I stopped immediately when I saw it, because I've been wondering if there is any Poison Hemlock around here.  But checking the field guide, this is Water Hemlock, with a flower like a somewhat finer and more open Queen Anne's Lace bloom. 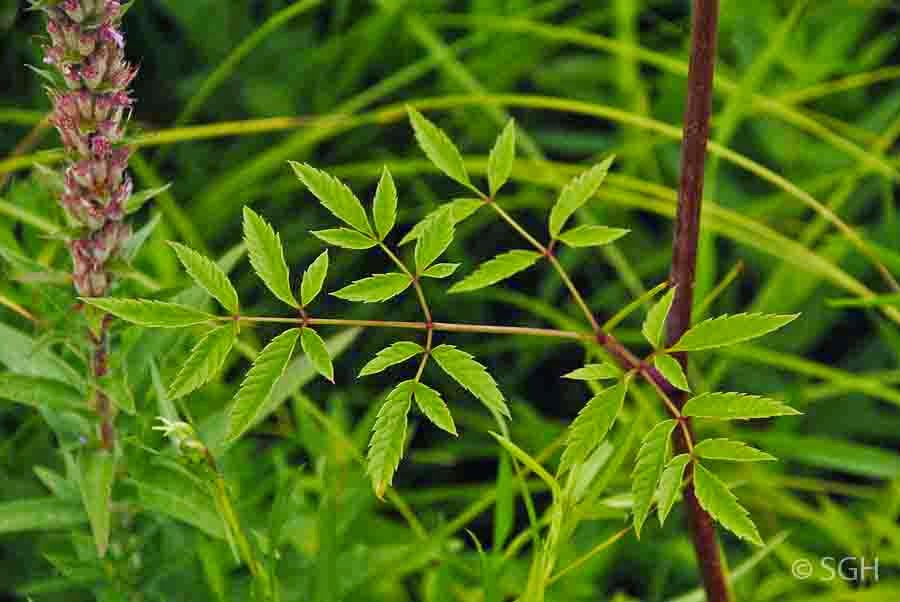 But the leaf clearly marks this species in comparison to other similar species in the area. 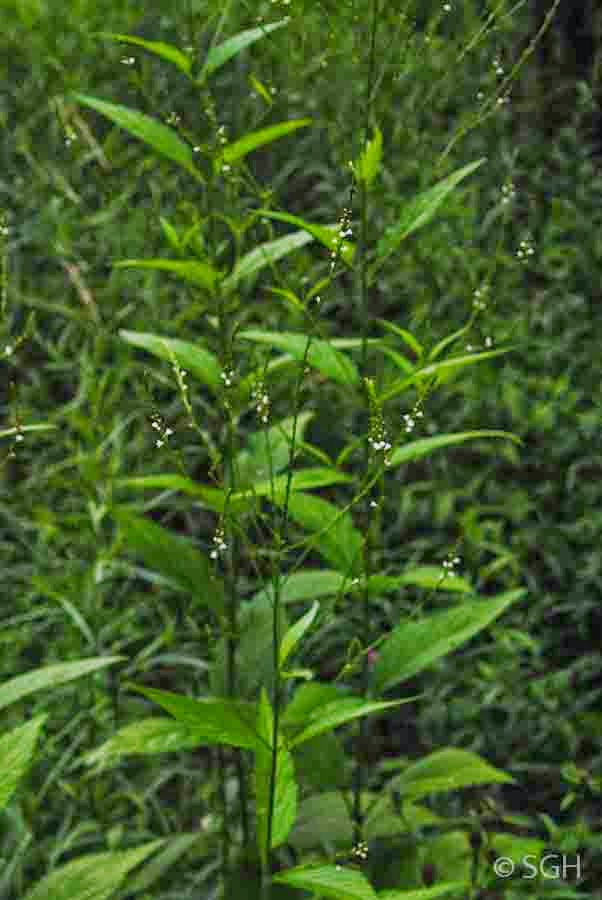 Finally, I snapped a quick not very good picture of this one as we walked out the trail.  Looked like a very thin and wispy White Sweet Clover, but with tiny flowers.  The only species I can find that matches it is White Vervain, which is new to me. 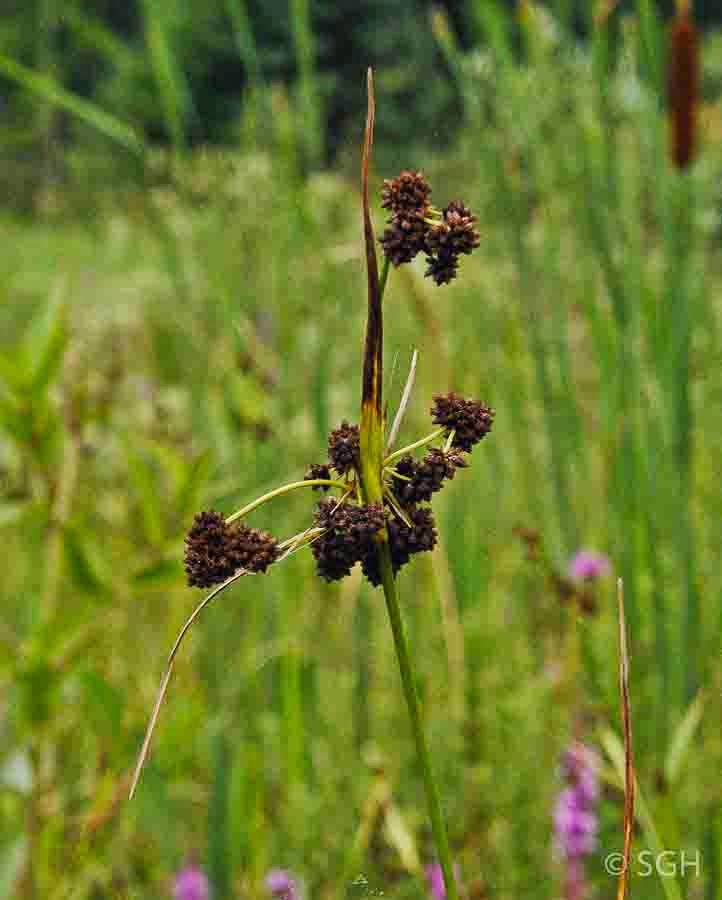 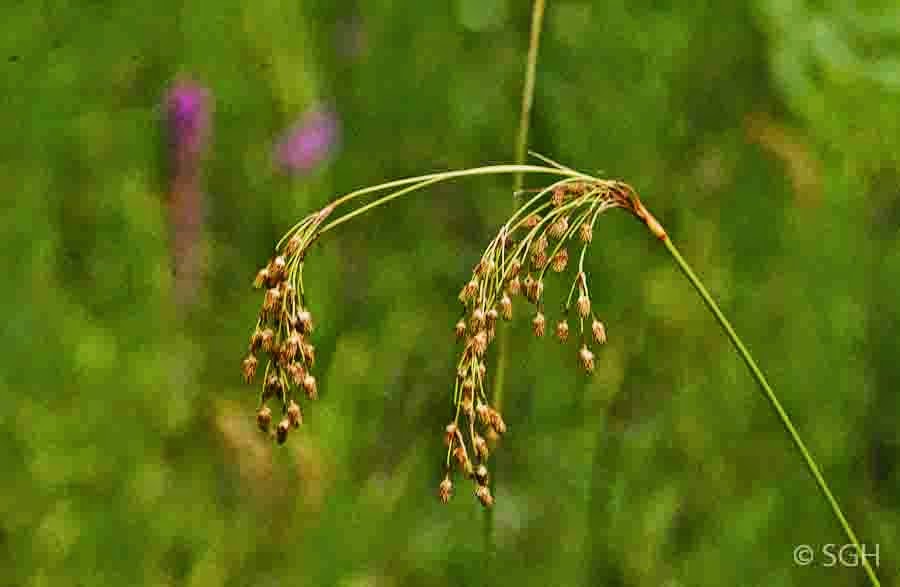 And there were a number of Sedge species, but I'm not going to even pretend I can identify these!  I can tell sedges (always have a triangular base), from rushes (always round in cross-section), and grasses (always have joints, which the other two don't), but that's as far as I get.  Any sedge experts out there? 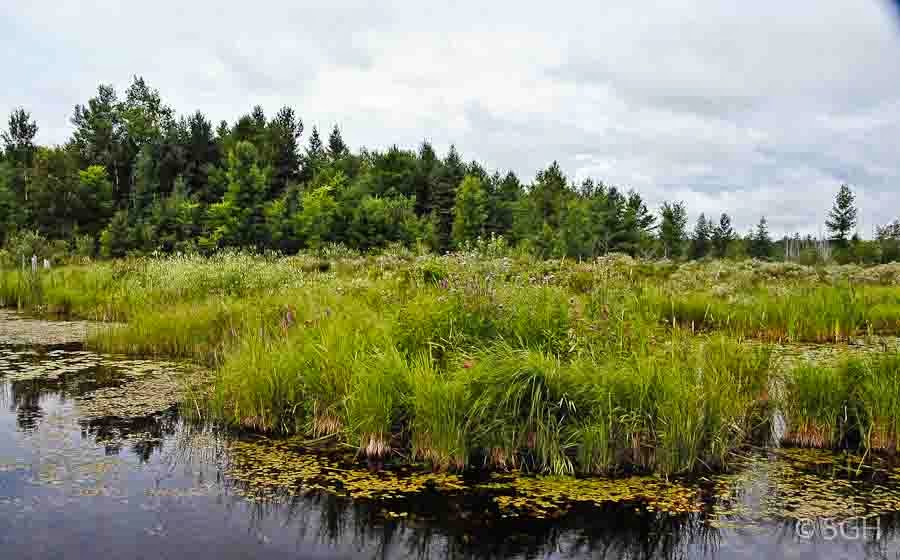 This is the sort of habitat where all these were found, the sedge and shrubby meadow wetland habitat along the shore of the actual open water.  It's been awhile since I had this fun doing a bit of botany, and I enjoyed it.