The other day I snowshoed in the old 10th Sideroad, now used only by walkers or snowmobiles.  I passed my favourite big old sugar maple (Monday's post), and eventually came to the creek.  Wodehouse Creek is that magic creek that arises in an enormous spring about 3 miles upstream, and disappears in a sinkhole about 2 miles downstream -a karst drainage system if there ever was one! 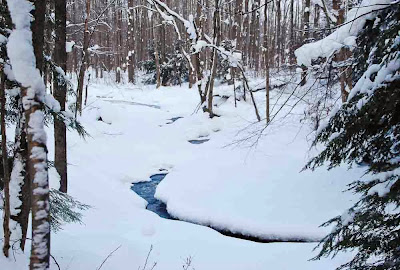 Along this part of it's path, it meanders through a small valley in a largely sugar maple forest, but though the creek averages 15-20 feet wide, only an intermittent narrow channel that hasn't frozen over yet is visible.  We've had lots of cold weather (it was -20°C this morning), and lots of snow. 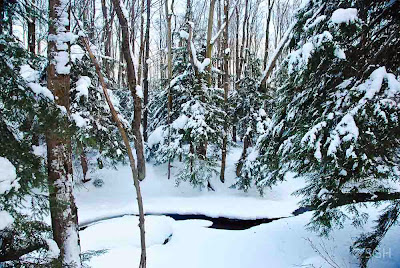 Since this creek is spring-fed and flows quite fast, sometimes it never freezes completely.  Like most creeks, it alternates between riffles and pools, and speeds up around some of the bends.  The calmer sections are more likely to freeze, while fast flowing water keeps an open channel. 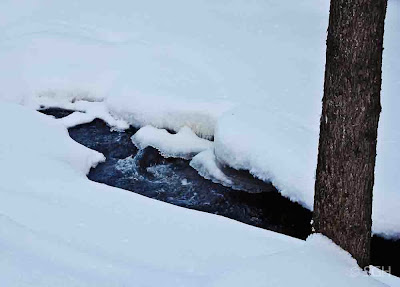 There were numerous little 'windows' into the black water under the ice, here pouring over a rock in the channel - but I wouldn't trust any of the ice on this creek with all that fast-flowing water underneath! 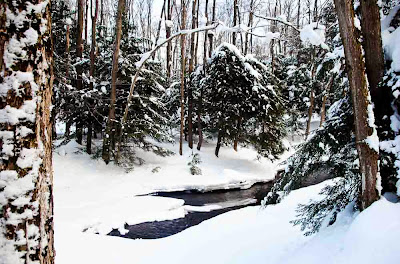 Although the forest around it is entirely deciduous (almost entirely sugar maple), there's a band of hemlock trees along the creek itself, attracted perhaps by the cooler temperatures along the water, down in the valley. 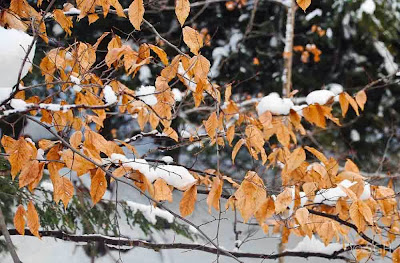 And for the short distance I slogged through deep snow in small snowshoes, there were lots of beech saplings, holding on to the leaves through the winter as always. 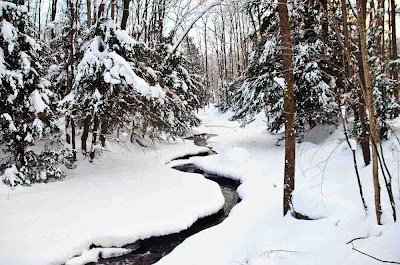 These narrow creek channels in the snow always seem to make an attractive winter picture to me, but I always also feel it's slightly ominous, the water black, and a lot of flow underneath what seems like such a peaceful blanket of white, a study in contrasts. 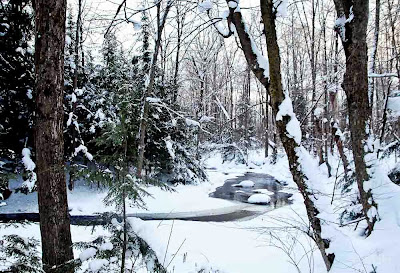 I only went off-trail along the bank of the creek for a short distance, feeling I might pitch face-forward into the snow at any moment.  Around this bend a couple of years ago I thought I saw an otter track, which would be really unusual here - but I've never seen one again.  This will be one place I will often go back to explore.