Further downstream from yesterday's pictures, Wodehouse Creek flows through a large pond, through the hamlet of Wodehouse, and on toward the sinkholes.  But surprisingly, this creek appears to be getting smaller as it flows downstream! 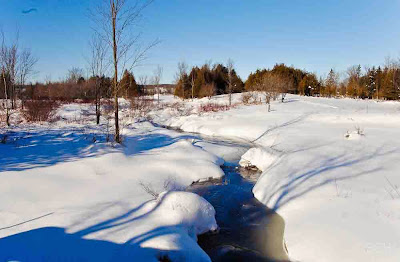 This photo looks north from Sideroad 7, and this is about the size of the entire creek at its normal flow, not 15-20' wide as a mile further upstream but only 6-8' wide.  And the creek has been joined by a significant tributary along the way.  I've watched this for several years now, and though I'm not a hydrologist, I'm quite convinced that the stream gets smaller as it goes downstream, except when its in flood. 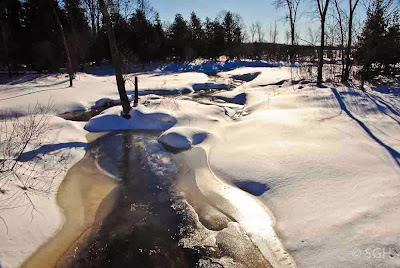 This picture, and the rest, looks south from the same bridge.  Straight into the sun, but I think it's a beautiful picture none-the-less.  During the spring flood stage this is all a lake, backed up because all the water can't fit down the sinkhole, but here its a small stream carving its curves through the ice and snow. 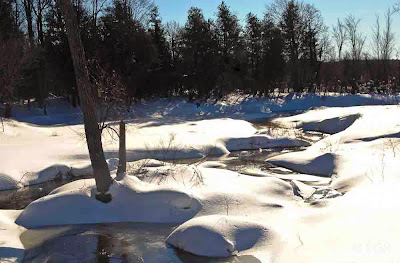 A closer look at the beautiful curves and shadows in the afternoon sun (shot straight into the sun, but I successfully used the spot remover to eliminate the sun's flare). 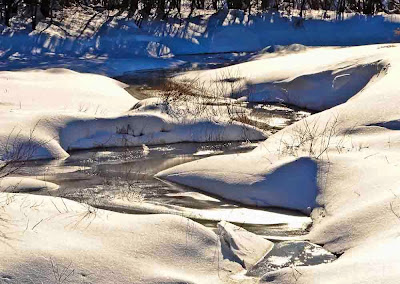 The only possible explanation for this creek getting smaller is that there are other sinkholes, beyond the well known and visible sinkholes just downstream.  They must be either in the creek itself or in the pond upstream, they allow it to lose some of it's flow. I don't know how I'd ever find such things, but maybe I'll go hunting during the summer when I could walk along the stream itself.

By the way, Wodehouse is pronounced 'Woodhouse', and is named after the Earl of Kimberley, a British politician who was among other things Secretary of State for the Colonies in the 1870's.  His family name is Wodehouse; the nearby village of Kimberley is also named after him.