We woke this morning to sundogs out the window, and news reports of frost quakes in southern Ontario.   And a temperature of -29°C, the coldest I can remember here.  The sundogs or 'parhelia' were striking this morning, perhaps the brightest I've ever seen. 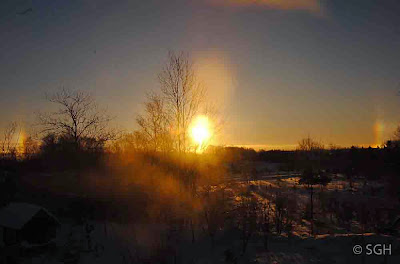 This wide shot shows the pair of sundogs off to the right and left of the sun.  They're caused by fine ice particles sometimes called 'diamond dust' in the atmosphere in very cold temperatures.  If the tiny ice crystals sink to the lower atmosphere and line up vertically, they form sundogs like this; if they're higher and not lined up, they can form a halo around the sun or moon.  Sorry about the sun flare in this shot. 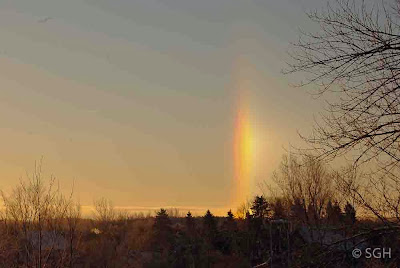 The westerly sundog was most spectacular when I first saw them, and out in the open so I could get a picture while poking my camera out the door into the frigid arctic atmosphere! 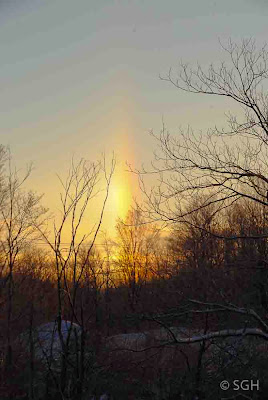 The easterly sundog was partly obscured by the trees that sometimes hide my sunrises, but still very bright.  Note that the colour banding is opposite in the two parhelia, the red closest to the sun on each. 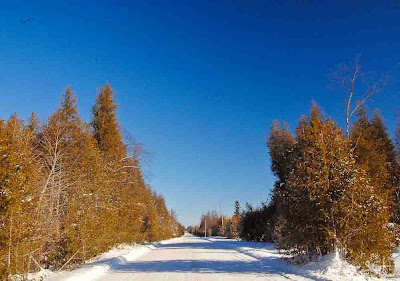 But they did foreshow a bright sunny cloudless day, with brilliant blue skies.  It was too cold for me for snowshoeing or skiing, so I went on a 'photography drive' (after putting on as many layers as I could).  This could have been any of the numerous roads I drove down, cold, crisp and sunny. 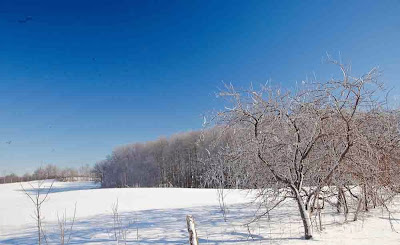 In patches here and there I found quite a bit of frost on the trees.  I had been assuming that frost occurs uniformly when it does, but I'm wrong.  It obviously develops in local patches as small as a few acres when conditions are right.  This entire woodlot looked frosty. 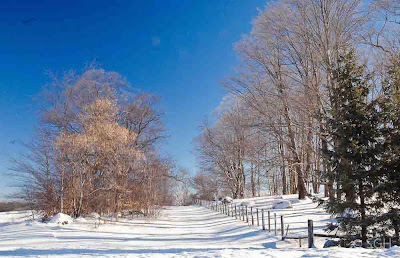 And as for the 'cryoseisms' or frost quakes, they are heard rather than felt, in the form of loud booms overnight or early on very cold mornings.  There have been numerous reports of such frost quakes across southern Ontario these days, apparently caused by moisture in the ground suddenly freezing and expanding.  After reading about it, I realized I probably heard one the other night, when I heard a loud boom, and put it down to ice falling off the roof - but none had fallen. 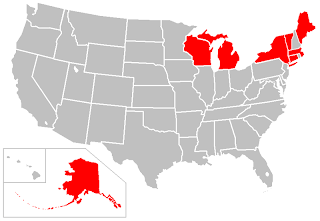 I was interested to find this distribution map when I looked up 'cryoseisms' in Wikipedia.  Apparently they occur in this band, from Wisconsin through into New England, and (missing from this map), Ontario and Quebec (as well as Alaska).  I would guess this is the part of the continent that has enough moisture in the soil, combined with sometimes extremely cold winter temperatures, to make this happen.  Interesting!