Views of the Valley Part II

The Beaver Valley starts out quite narrow and deep, almost a gorge in its upper reaches, but widens as it flows north.  About half-way north, it widens out and swings a bit to the east, until eventually the Beaver River flows into Georgian Bay at Thornbury. 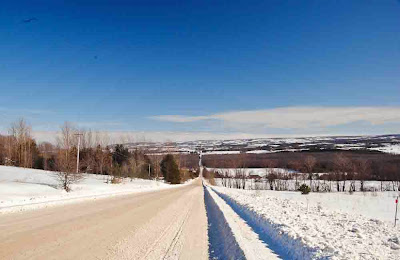 This view is taken about halfway down the valley, facing east, along the Epping Sideroad, on a clear crisp day about 2 weeks ago.  This valley is a giant indentation in the Niagara Escarpment, or what geologists call a 're-entrant' valley, so we're standing on the gentle west slope of the escarpment, and in the farthest distance is the opposite east slope.

Right down in the bottom of the valley there is a very large soft maple swamp, extending for several miles along the river, here frozen enough to be snow-covered, though I certainly wouldn't walk on it.  This is a popular canoe route, and this year a nesting Bald Eagle was reported upstream of this point. 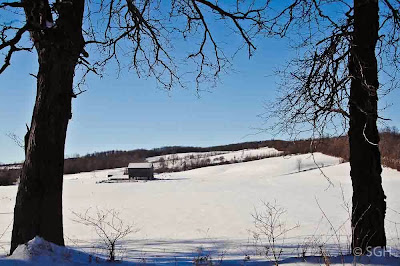 In the northern half of the valley, the slopes are much gentler than further south (near our place), as in yesterday's post, where the huge vertical cliffs of Amabel dolomite outcrop along the valley sides.  This photo is taken from the bottom of the valley, looking back up to the west.  The trees are two of an interesting row of Black Locusts, rarely seen around here except in a few planted fencerows and roadsides. 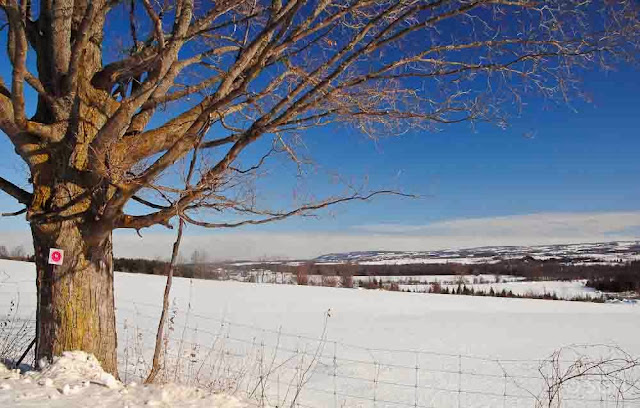 I've hunted extensively for viewoints that would make a really good picture.  The human eye seems to catch a horizontal sliver of the valley in the distance and translate that into a mental view of a wide-open valley landscape, but the camera is quite different.  Having a handy tree to help frame the picture helps I think, but there are precious few viewpoints like this. 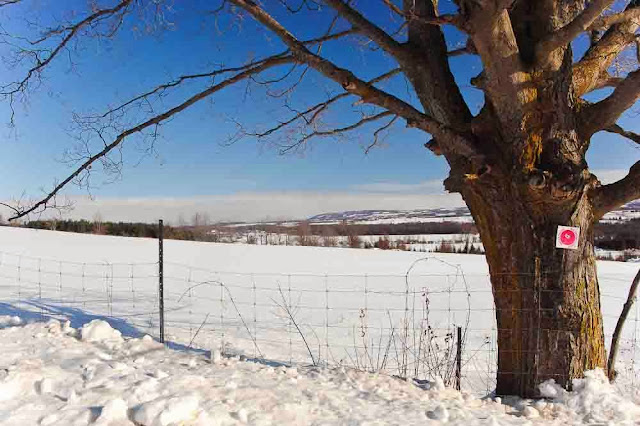 Even with the red 'No Tresspassing' circle (mainly intended for hunters I expect), this tree helps frame a nice view of the escarpment outcrop known as the 'Blue Mountain' in the distance.  And the pictures give you an idea of the wider, gentler valley slopes compared to the upper valley in yesterday's post. 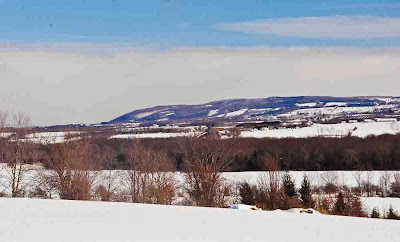 This is a closer look at the west side of the 'Blue Mountain', across part of the large swamp down in the valley bottom.  Several of the bigger Ontario downhill ski clubs are found on the north and east slopes of that hill, where they're facing out of the sun, including the popular Blue Mountain Resort itself.