The Extremes of Winter

We've now reached about the most extreme winter conditions we ever get.  This is the heart of the winter season.  After surviving the heavy snowfall and snow squall warnings, we now have wind chill and blizzard warnings.  All the schools in Grey County are closed; all the roads are officially closed.  They've pulled the snowplows off the roads because of the poor visibility.  It's not safe to plow, let alone drive. 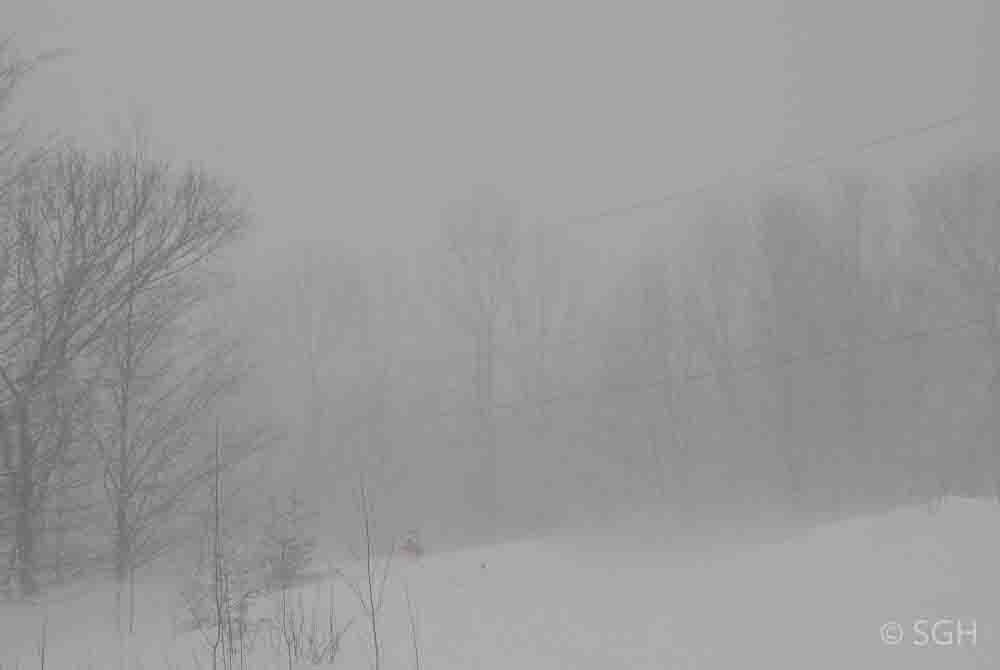 This is the typical visibility today looking out our driveway.  I did get out with the dog twice, but they were short walks, only 15 minutes - and I learned what 'wind chill' is really all about.  It was -24­°C, feeling like -35 with the wind chill, and when I took a glove off to try a picture with my cell phone my hand was quickly frozen.  The cold wasn't so bad (with all the layers I had on), but that wind was bone-chilling. 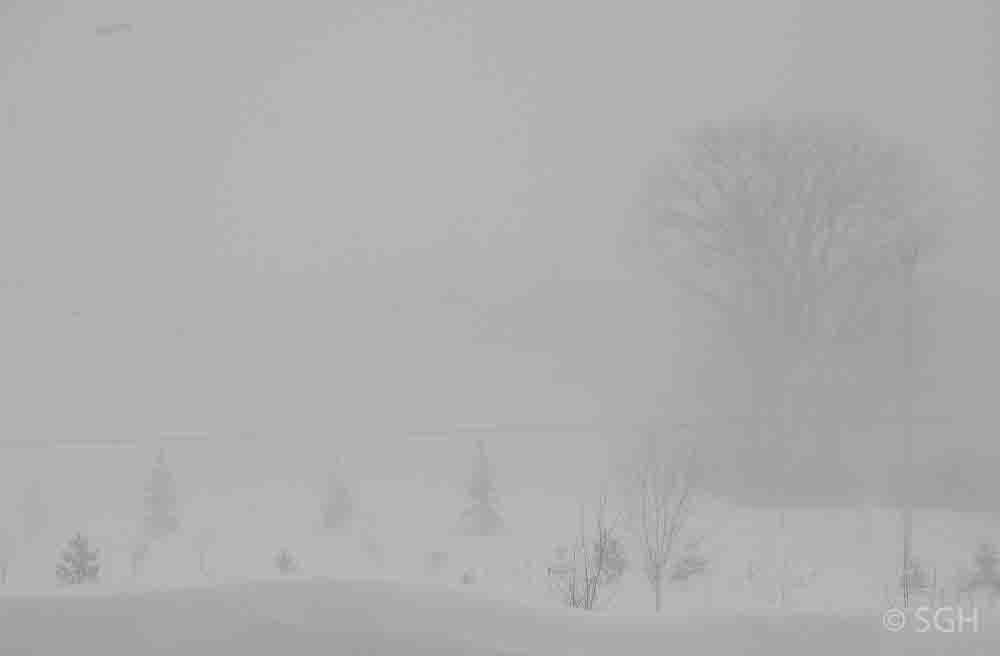 This is the visibility out to the main road out back.  This level of poor visibility isn't really the problem though.  When a snow plow goes by with a wind like this blowing, it raises the snow in the air, and the wind swirls it around the plow in a dangerous white-out.  Then there's no visibility for driving.  It isn't snowing in these pictures; it's just snow being blown around in the air. 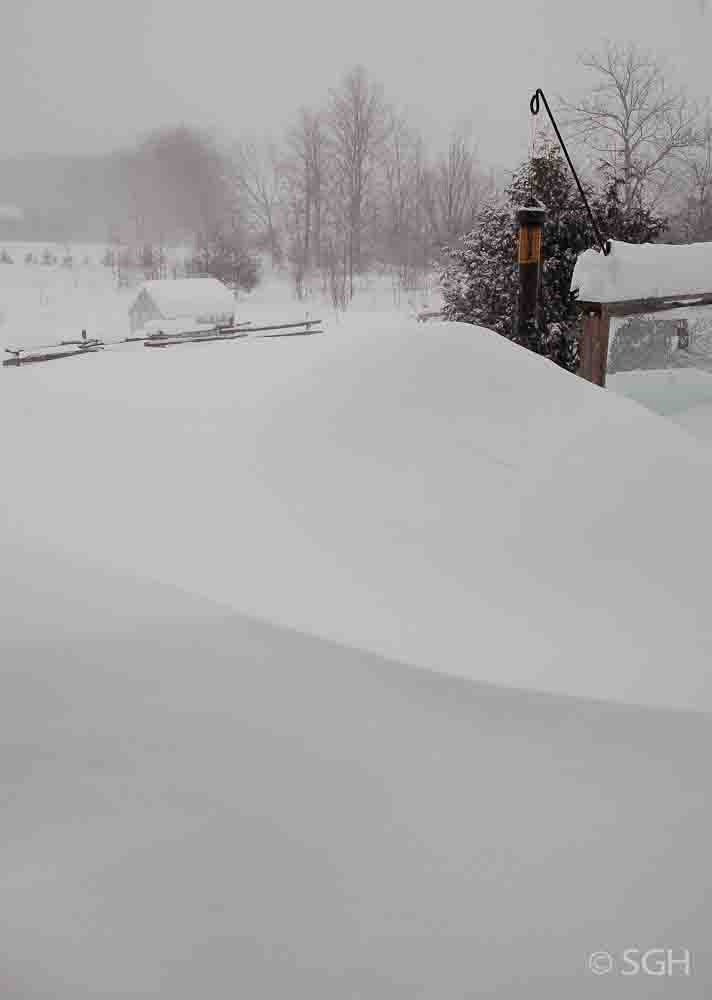 And with the wind come drifts.  Not just a gentle snowfall accumulating, but snow piled in places where it usually isn't, like on our deck.  You can see the feeder hanging there, but there were no birds today!

Winter in North America is a battle between 2 (or sometimes 3) air masses.  Warm moist air comes north from the Gulf of Mexico or thereabouts, and cold air comes down out of the Canadian arctic.  They meet somewhere around the northern states, the Great Lakes, or Ontario, Quebec and the Maritimes.  At the moment the arctic air mass is winning, plunging not only us but much of the U.S. into very cold temperatures.

And why do we have such strong winds and severe wind chill?  Because there's a big difference in pressure between the two air masses that brought warmer air to the NE states over the weekend, and the arctic air following it.  The atmosphere always tries to even out the pressure differences. 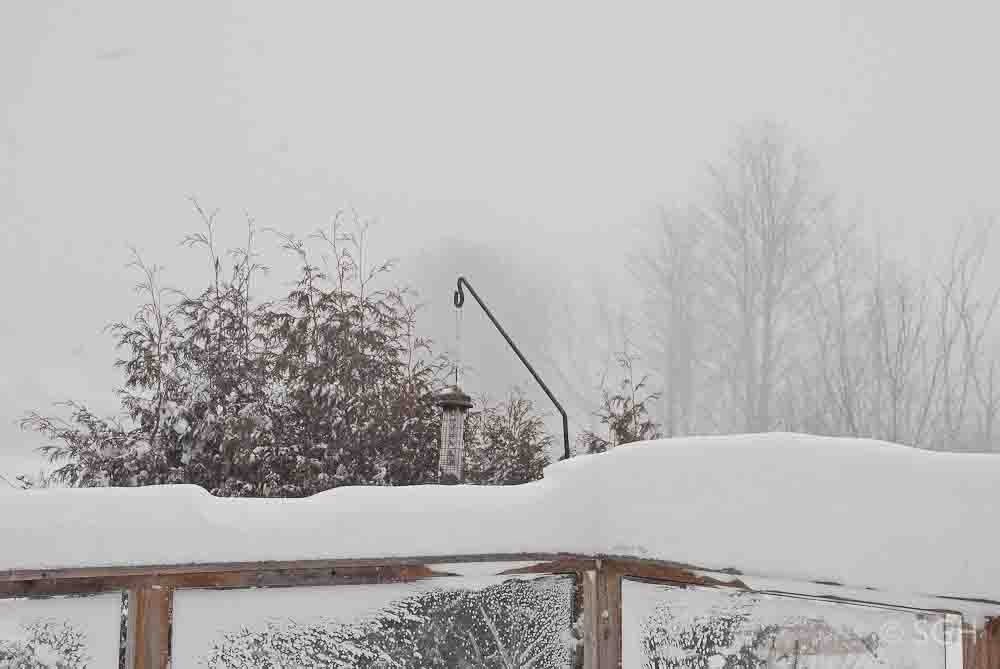 The snow is piled at least 16" deep on the railing here, and that's just since yesterday, as I cleared the deck on Sunday (to be ready for the new snow!).  Meetings were cancelled.  It was a good day to stay inside and read or write, which is just what I did. 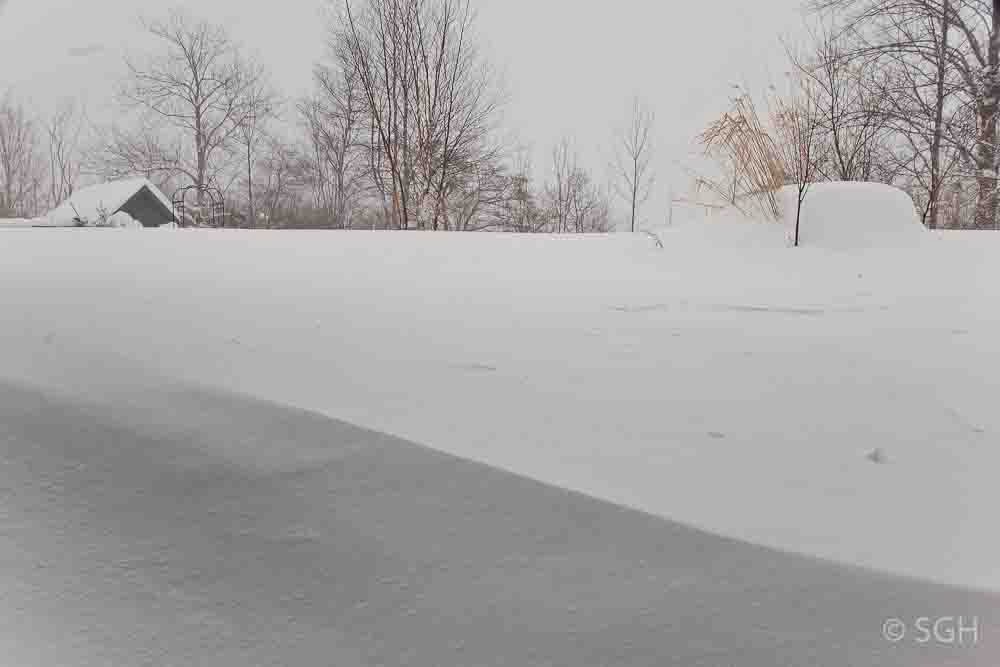 In spite of all this, there are signs of life.  Walking the dog I got back with it still light out.  I thought it was getting close to 5 p.m. - it was 5.30!  Longer days are here already.

Though I'm tired of hearing that 'climate change isn't happening after all'.  NOAA scientists suggest that it's actually the warming of the arctic overall that leads to the weakening of the normal winter polar vortex over the pole, enabling it to break apart and come visiting us!  (See the links from Fred's interesting post on frost quakes at 'Fragments from Floyd').