On our geology hike the other day we had lunch sitting around an old barn foundation, and I learned several interesting bits of geology.  The barn foundation itself is amazing.  I can't get over how foundations like this were built 100+ years ago, with no power tools, and are still standing. 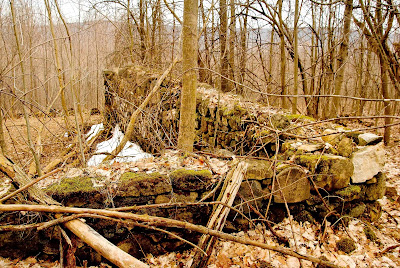 This barn was built into the side of the escarpment slope, and obviously had wooden posts to provide the front wall, sheltered from the westerly winds; only 3 stone walls remain.  The barn itself was moved to another location many years ago, leaving just the foundation.  This picture was taken last April. 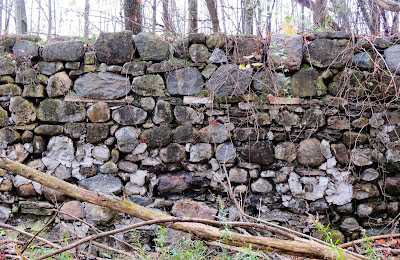 Looking from the inside, the barn foundation wall looks like this - quite a mixture of small and large rocks, but carefully placed to provide the stability, and likely originally covered with mortar.  History suggests that there were skilled masons and timber framers who travelled the countryside to direct the construction of early barns where they were needed. 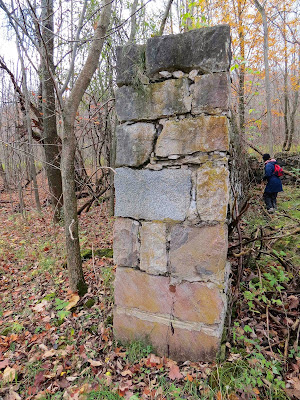 The masonry work on the open ends of the foundation wall was striking, large boulders cut virtually flat and mortared to provide a square corner.  I'm not sure many people remain who could demonstrate how to do this sort of stone work in the days when a metal wedge and fire was all you had to work with. 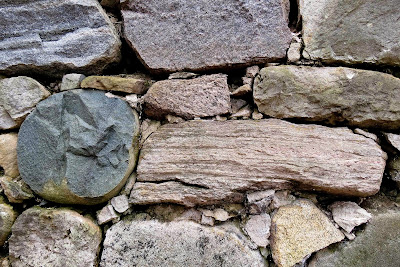 As for what I learned, the stone walls are a mixture of rock types.  The left of these two in the centre is granite, an igneous rock which is homogeneous in composition.  In contrast, the rock on the right, which shows thin layers or stripes of different minerals, is a metamorphic rock, likely gneiss, in this case with a lot of felspar, which gives the pink colour.  Both of these are glacial erratics, brought south from the Canadian Shield by the glaciers. 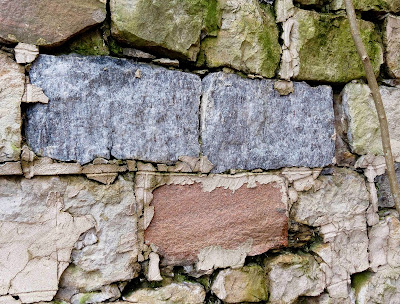 The two bluish-grey blocks here, carefully squared off, are also gneiss, a metamorphosized granite, in this case with a lot of quartz, which gives the white colour, and some black which is mica. 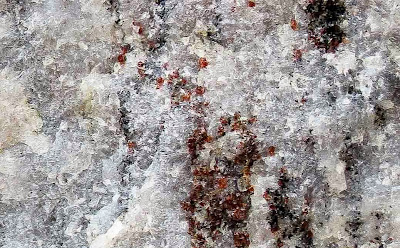 And if you look closely, you can see the tiny reddish particles of garnet in the gneiss. 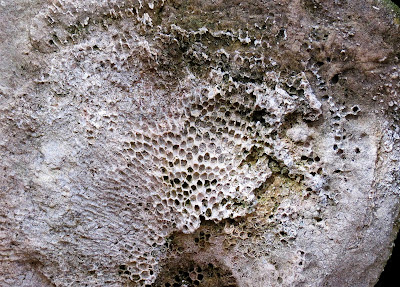 The last one is limestone, or more correctly dolostone, which is the common rock of the Niagara Escarpment around here.  This one has a large Honeycomb Fossil in it.  The dolomite rocks that make up the top layer of the escarpment here are the remains of an ancient coral reef which contains fossils like these. 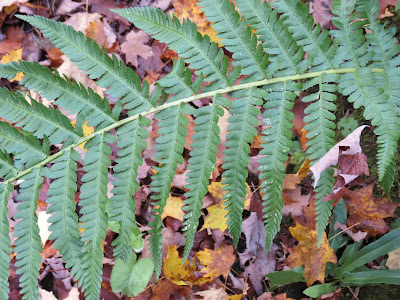 We did see other things than rocks.  This is a Male Fern that I noticed right beside the trail.  Not really rare, but certainly unusual to see. 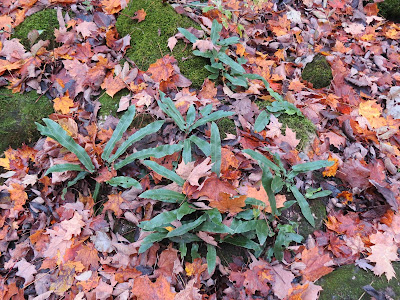 And this is the very rare Hart's Tongue Fern, though we are right in the middle of its major North American population here, so it was plentiful along the trail we walked Sunday. 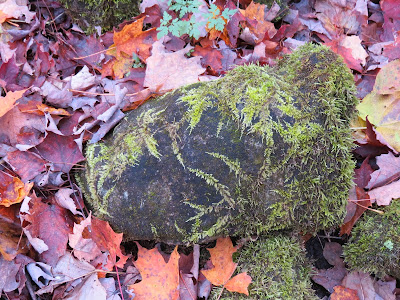 Finally, I just like the way the moss was creeping out around this boulder in thin bands of new growth.