When I go wandering off trail through the woods in the fall, as I frequently do, my sox usually come back laden with some sort of burs, and sometimes my sweatshirt or jacket sleeves likewise.  For two years I've been gathering pictures that would let me post about the most common burs we find on our sox around here, so here they are. 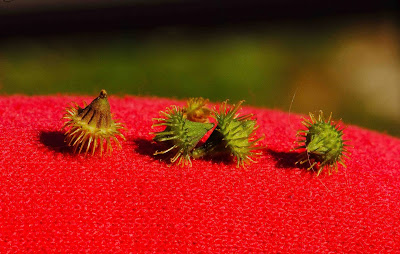 The most common is almost always Agrimony (Agrimonia), here shown stuck to my sweatshirt, as it sometimes is.  More often it's in my sox, as it tends to be low to the ground.  It's easy to identify by the distinct triangular shape, about a quarter inch across.  They also pull off easily, so though they're a nuisance, they're not really bothersome. 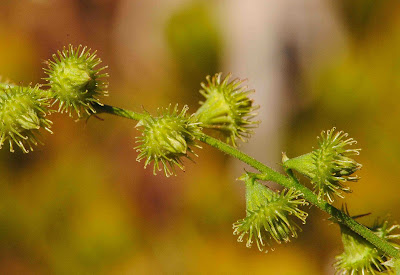 This is really a group of several nearly identical species, properly referred to as Agrimonies unless you're a technically expect botanist (which I'm not!).  The bur grows on a long slender stem as in this picture, just waiting to snag itself on an unwary sock. 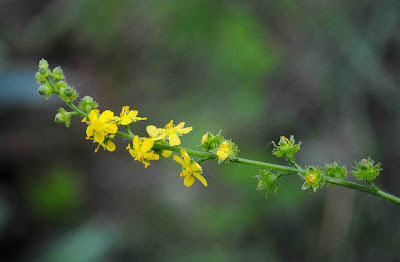 And this is an Agrimony much earlier in the season when the plant is in bloom.  It features several inches of tiny yellow blossoms that you might almost miss, along the stem, usually in June.  Tracing the burs back to get pictures of each in bloom was what took me two years!