Yesterday I showed the grain crops, some of which are nearly ready for harvest - after all, tomorrow is Lammas Day, the traditional festival of the wheat harvest.  But several other crops are also important in Grey County.  In fact, there are more acres of corn and soybeans than any of the grain crops, even though Grey is the biggest barley producer in the province.  Grey ranks highly in canola production too. 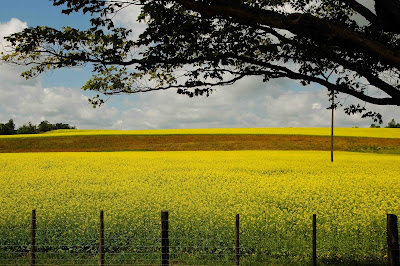 Canola is one of the most beautiful crops, turning bright yellow when in flower.  It's not a grass, but was developed from rapeseed by researchers in Manitoba.  It's definitely a northern crop, grown all across the Canadian prairies, and in the relatively more northern parts of Ontario, not even making it to southern parts of the province.  In the prairies it sometimes alternate with brilliant blue fields of flax -you have to see it to believe it! 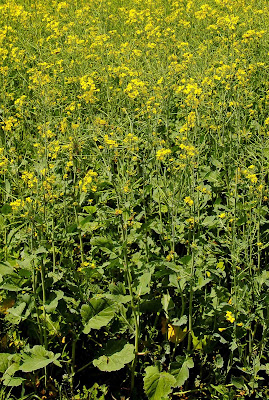 Canola is related to mustard, cabbage, turnip and brussels sprouts, and is harvested when the seed pods ripen much later, and used for oil production.  As you can see here, it's one of the crops with round heart-shaped leaves when first germinating, and a field before blooming tends to have a bluish-green colour. 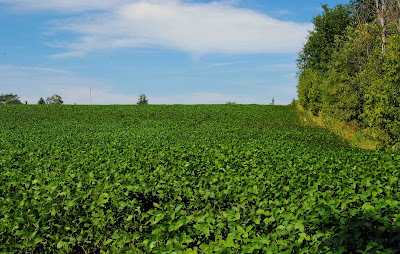 Soybeans are another crop with oval leaves in threes, just like the beans you grow in a garden.  At this time of year it's still a rich deep green and growing fast.  This is the biggest crop in Grey County other than hay. 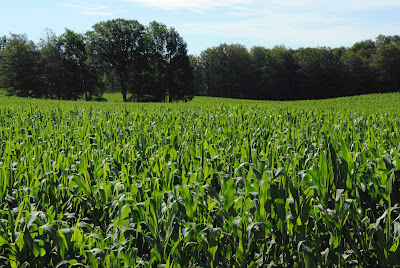 Corn is similar, growing fast, getting up to 6 feet high now, and in some fields beginning to tassle.  The tassles are actually the male flowers, which release pollen fertilizing the corn kernels   It won't be harvested for months yet, but we are getting the first sweet corn in stores now. 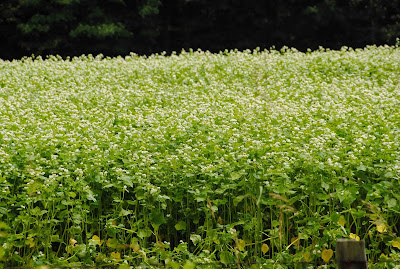 And I added a picture of a very minor crop, buckwheat, simply because it fascinates me.  I always think of it in relation to buckwheat honey, but it's main use is as a cover crop, and it's also used for livestock feed and some human consumption. 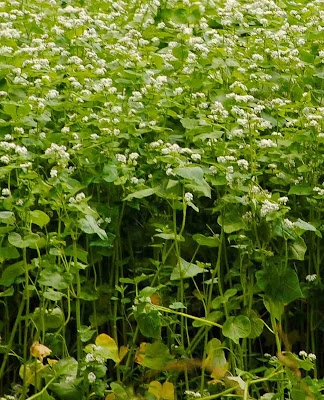 The buckwheat plant is actually related to rhubarb, and also has round heart-shaped leaves a bit like canola.  It looks like a field of plants about 3 feet tall with small white blooms, but you won't see it often. 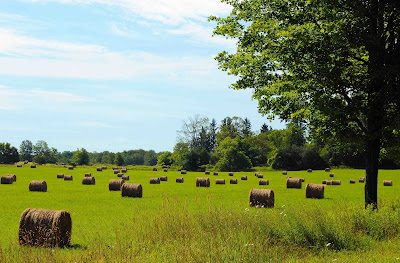 Finally I couldn't resist another picture of the hay harvest, which has been going on for weeks now.  After all, Grey produces more hay by acres than any other county in Ontario, by far.  It's the real backbone of our farm landscape.