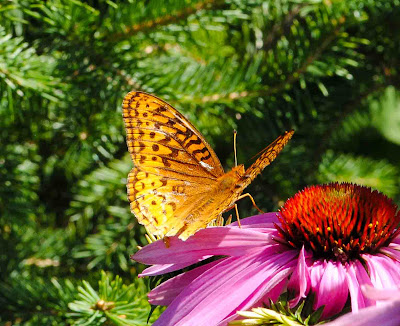 The 'Great Spangled Fritillary' has got to be the neatest name for a butterfly.  This one alighted briefly on a coneflower in our garden.  It flits around the garden frequently, tantalizing me with the orange colour I always hope is a monarch - but so far not this year.  Never-the-less, this is a beautiful butterfly with striking patterns on both upper and lower wing surfaces. 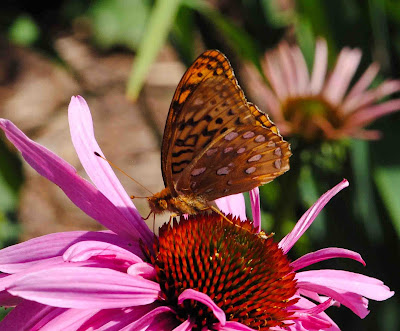 The underside hind wing is heavily silvered, like several of the other fritillaries, gleaming if the light hits it at the right angle.  It's just been around for 2-3 weeks now, seeming to be a July butterfly. 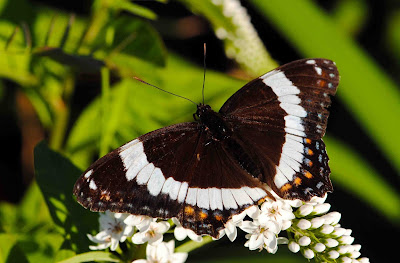 I've seen the White Admiral for several weeks longer, since earlier in the spring, and often see it fluttering past, but here it sat on a Gooseneck Loosetrife flower and allowed me to approach quite closely.  At a distance all you notice are the dark wings and the white band, but up close the blue and orange borders of the hindwings show up clearly. 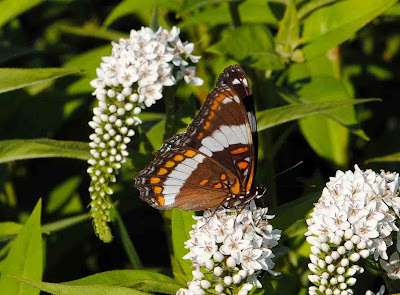 The underside of both fore and hindwings are quite different, with obviously more orange spotting, and seemingly a lighter brown background rather than the almost black of the upper wing.

I like to think that the plants we have in the garden are serving them well!  I've thought about signs of the changing seasons for years, but only recently concluded that July is the month of the butterflies.