The past few days the meadow has just been overflowing with tiny butterflies, especially little orange-brown skippers.  They rise in clouds when I walk, especially around the patches of trefoil, vetch and (in the garden) valerian.  I can't get over how many there are, probably thousands on our 2 acres alone. 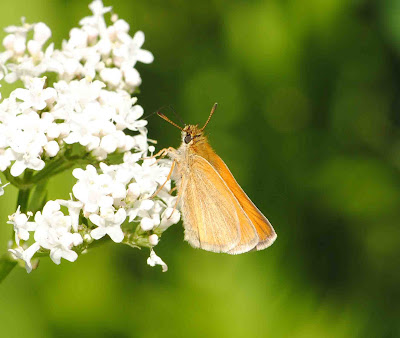 This is the usual view of the skipper, its wings folded, light reddish brown, only about a cm in size, fluttering from flower to flower, often with 3 or 4 on one plant. 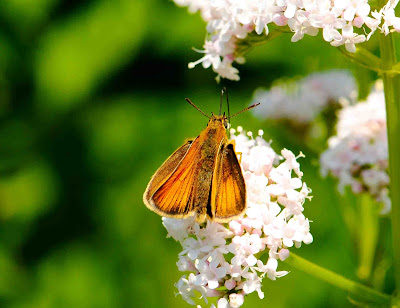 Occasionally you catch a closer look, and realize that sometimes they hold their two wings at separate angles.  I honestly don't know which skipper it is.  Checking the online guides I could make it a delaware skipper or a least skipper, but I suspect it's just a European skipper, which to quote one site 'has become unbelievably abundant' throughout eastern Canada and the U.S., especially in grassy habitats.  That describes our meadow. 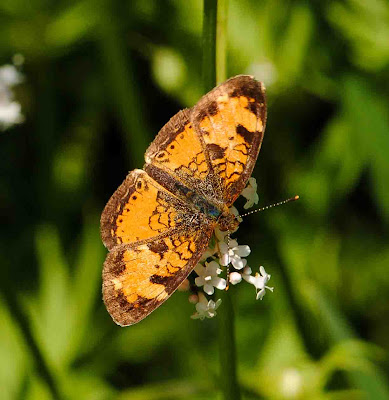 There are almost as many Northern Crescents, a slightly bigger butterfly that also loves the valerian in the garden.  I often see three or four at once hovering around a single patch of flowers.  The wing pattern on these is quite distinctive. 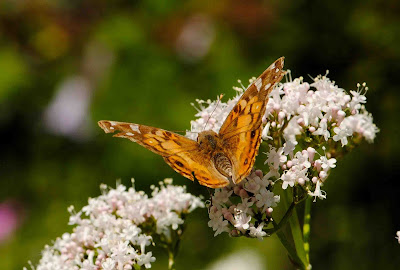 I also spotted one Painted Lady, though this one looked like a rather tired, faded and tattered specimen.  In all of these trying to get a clear photo has been almost impossible.  I have taken dozens of each, only to get one or two that are passingly clear. 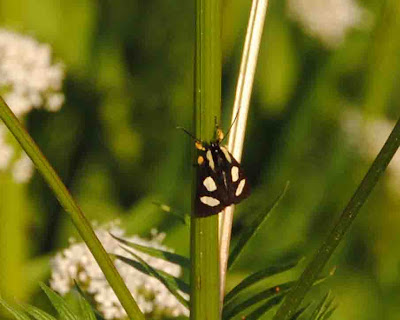 This heavily cropped image is of a moth I've never seen before, an Eight-spotted Forester, with a very distinctive black and white pattern, with some yellow on the forelegs. 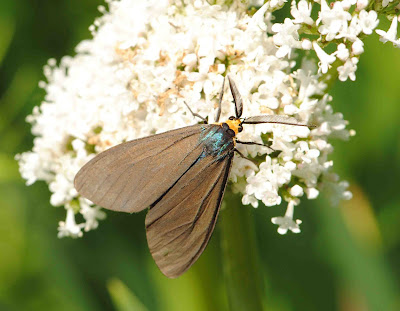 And finally this is a Virginia Ctenuchid Moth, with a very distinctive yellow-orange head, and a blue patch behind this.  both of these moth species fly during the day.  The latter was fluttering around the valerian with the Skippers and Northern Crescents.

I just realized that by coincidence all five of these photos were taken on the valerian flowers in our garden.  Valerian in your garden turns out to be great for attracting butterflies and moths, as well as being very fragrant.
Posted by The Furry Gnome at 9:51 PM

Email ThisBlogThis!Share to TwitterShare to FacebookShare to Pinterest
Labels: Butterflies